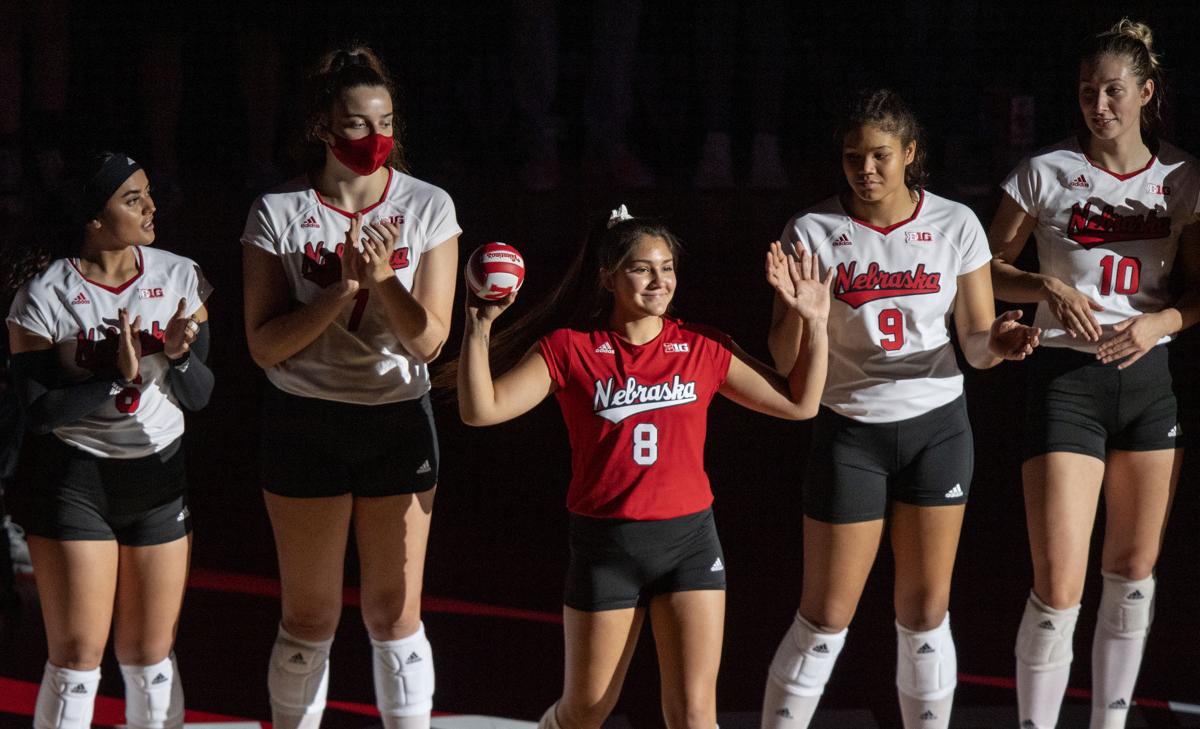 Nebraska’s Lexi Rodriguez (8) acknowledges the crowd's cheers before the match against Iowa on Saturday at the Devaney Sports Center. 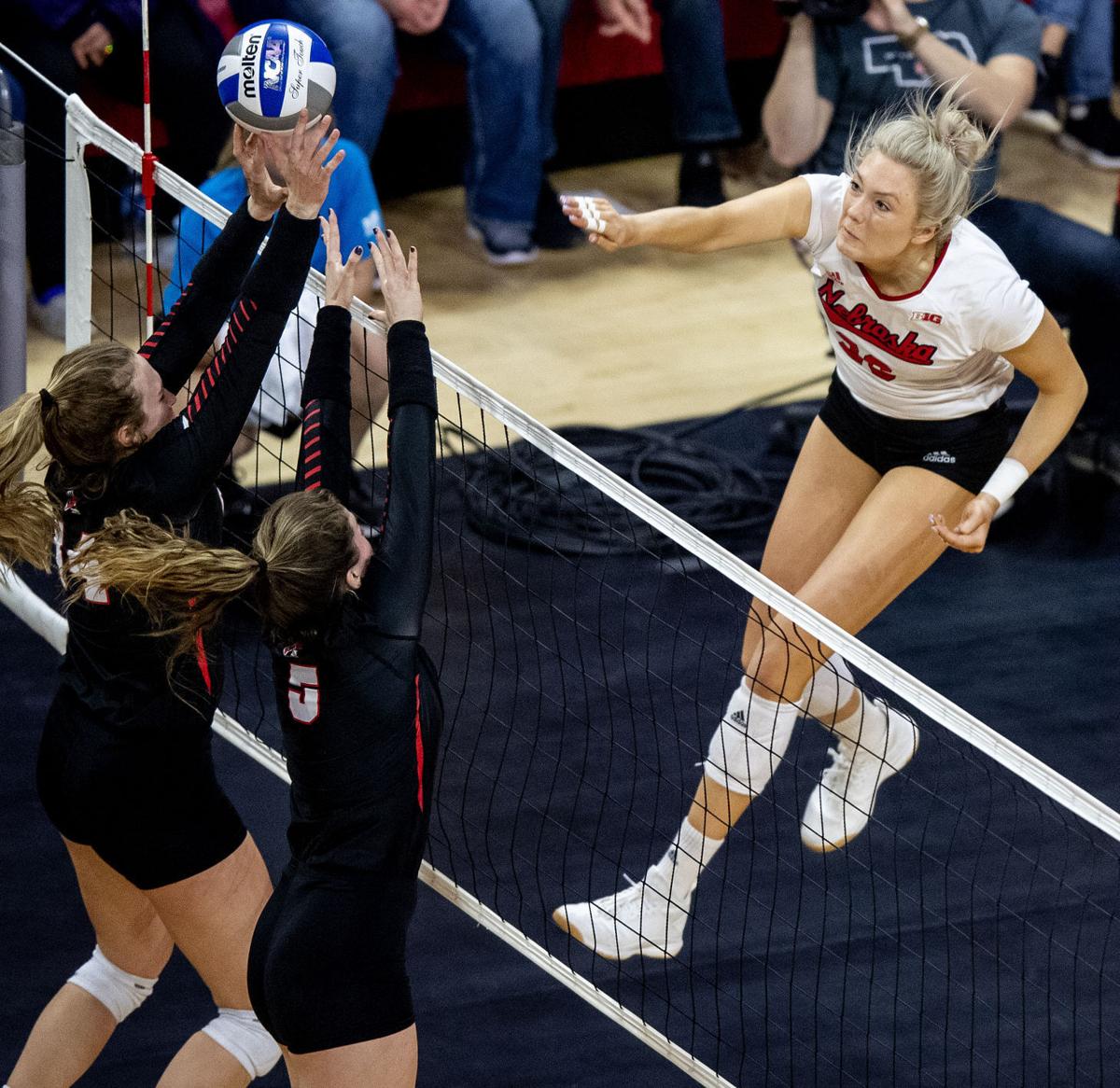 Nebraska’s Lauren Stivrins (26) goes for a kill in the first set against Ball State’s Kia Holder (14) and Marie Plitt (5) on Dec. 6, 2019, during the first round of the NCAA Tournament at the Devaney Sports Center.

Nebraska volleyball coach John Cook thinks All-America middle blocker Lauren Stivrins will play for the Huskers this season, but he doesn’t know when.

Stivrins hasn’t played in a match this season after having offseason back surgery. But she’s hitting during practice now, and if she doesn’t have any setbacks, she may be inching closer to returning.

Nebraska has nine weeks remaining in the regular season, and then the NCAA Tournament.

For part of the season, Stivrins attended practice but was not participating.

Last Friday, Stivrins was part of the entire practice, and this week the plan is for her to go through a normal week of practice.

“Physically I think it’s there,” Cook said. “Mentally she’s got to get confident to play. When that happens, I don’t know. Nobody knows. It’s going to be one day she feels like, ‘OK, I feel like I’m confident and can do this.’”

How soon Stivrins plays will be decided by Stivrins and athletic trainer Jolene Emricson.

“She’s not playing until she says she feels confident,” Cook said. “So that’s between her and (Emricson). But she will be in practice this week and we’ll see how that goes.”

Nebraska’s offense hasn’t been great this season, and that’s an area where Stivrins could make a difference.

Huskers stand pat in the rankings: Nebraska stayed at No. 12 in the new AVCA rankings released on Monday.

The Huskers went 2-0 during the opening week of the Big Ten season to improve to 8-3 overall.

“We got a ways to go,” Cook said. “The message is going to be, we have not arrived yet.”

Texas stayed at No. 1 in the poll, but Wisconsin dropped from second to fifth after its first loss of the season against Maryland.

That means Pittsburgh moved up to No. 2 and Louisville to No. 3. Louisville, coached by former Husker player Dani Busboom Kelly, is 10-0 and has its highest ranking ever.

But Cook isn’t surprised that more teams are capable of beating the top teams, because each year he sees more good volleyball players.

“I’ve noticed this in recruiting, there used to be just a few good players everybody was recruiting,” Cook said. “Now there are a lot of good players that everybody is recruiting. The depth and the quality of volleyball, I think it’s the most popular girls sport in America now. There is just a lot of really good volleyball players.”

Krause earns Big Ten award: After her best week as a Husker right-side hitter, Lindsay Krause was named the Big Ten freshman of the week. In a win against Northwestern, she had 15 kills and hit .500. While beating Iowa, Krause made only one hitting error over 22 attempts, finishing with 12 kills and a .500 hitting percentage.

In the family business: Taylor Els, a 2016 graduate of Lincoln Southwest, is in her first season as a full-time assistant coach for the Montana State volleyball team.

Last season Els, who played in college at Northern Colorado, was a volunteer assistant coach at Michigan State. That year Els, her dad and brother all were coaches at Michigan State. Ross Els is the special teams coach and linebacker coach for the Spartan football team. Bo Els is a graduate assistant football coach.

As a defensive specialist this season, Knuckles is giving the team a lift in bursts, whether it's with a back-row kill or thumping a serve.

NU coach John Cook says winning the Big Ten is harder than winning the NCAA Tournament, and the Huskers are about to put that to the test in a tough stretch of foes.

No. 9 Nebraska steals momentum despite losing first set, then overpowers No. 7 Purdue

Madi Kubik had 15 kills to lead the No. 9 Nebraska volleyball team to a four-set win against No. 7 Purdue on Saturday.

NU volleyball notes: The Huskers are leading the way in Big Ten play at 8-0, but they know what's ahead

Nebraska has a lead in the Big Ten volleyball standings, but there's still a long way to go — “It’s one match at a time, it’s the Big Ten grind.”

Still no five-set matches for Nebraska in its run through Big Ten competition, with Saturday's victory a sweep against Illinois.

'We were thinking we weren't going to be good:' The story behind NU's 2000 national title team

Nebraska’s Lexi Rodriguez (8) acknowledges the crowd's cheers before the match against Iowa on Saturday at the Devaney Sports Center.

Nebraska’s Lauren Stivrins (26) goes for a kill in the first set against Ball State’s Kia Holder (14) and Marie Plitt (5) on Dec. 6, 2019, during the first round of the NCAA Tournament at the Devaney Sports Center. 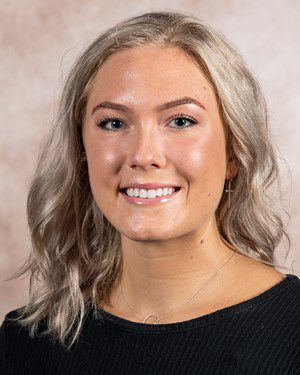