No. 9 Nebraska steals momentum despite losing first set, then overpowers No. 7 Purdue
0 Comments
Share this
{{featured_button_text}}
1 of 2 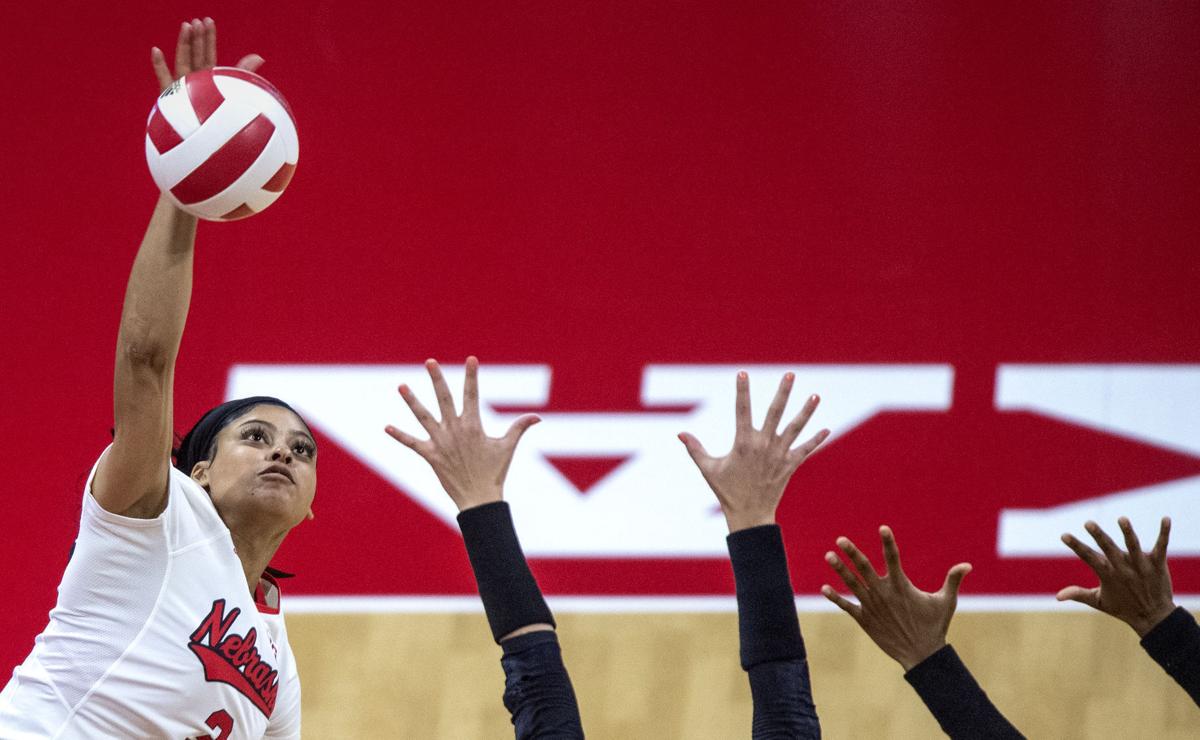 Nebraska’s Kayla Caffey hits against the Purdue block for a first-set kill Saturday at the Devaney Sports Center. 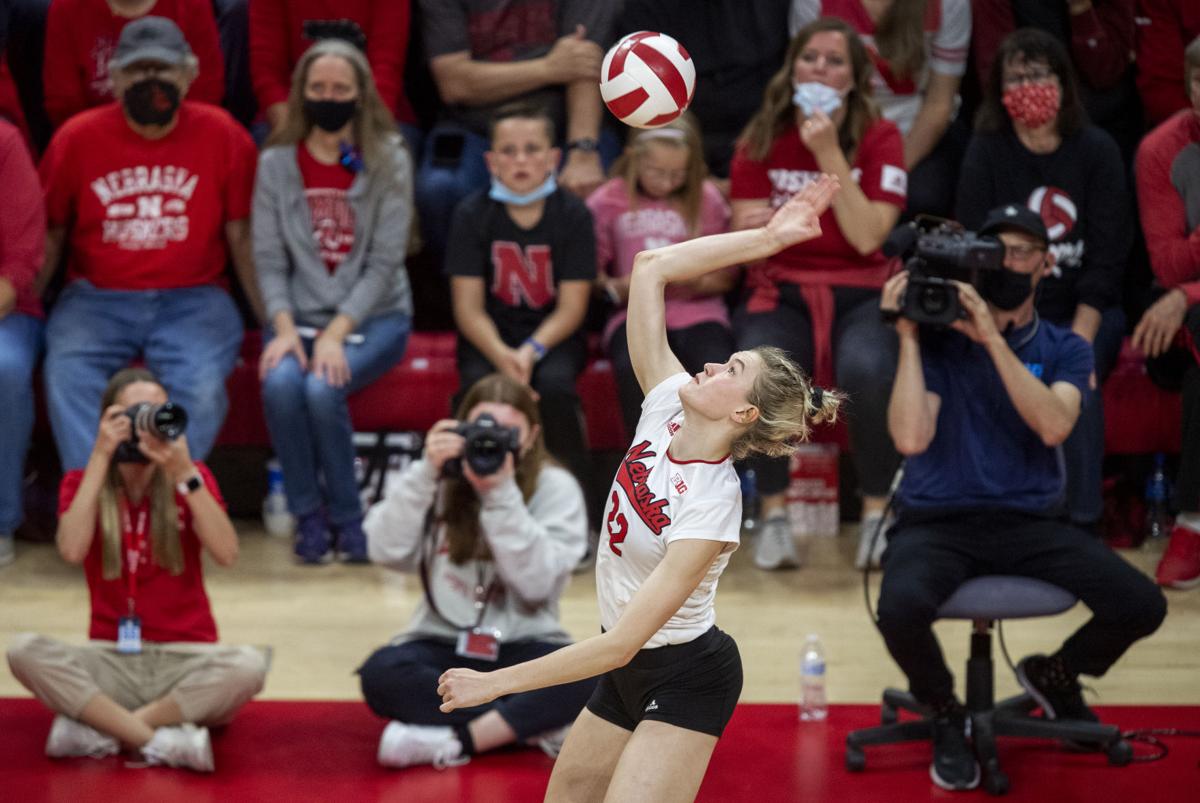 All eyes and cameras are on Nebraska’s Lindsay Krause (22) as she attempts a kill in the fourth set against Purdue on Oct. 23 at Devaney Sports Center.

The Nebraska volleyball team lost the first set against Purdue on Saturday, no doubt about it.

But the defeated feeling the Huskers experienced in the middle of the first set when Nebraska trailed 15-8 and couldn't seem to stop Purdue had largely been wiped way by the end of the first set.

That meant Purdue didn’t have as much momentum going into the second set as you would expect for a team winning the first set on the road, and from the second set on, the match was almost all Nebraska.

That’s Nebraska’s first win against a top-10 team this season.

The Big Ten season has reached the turnaround point, with 10 matches down and 10 to go, and Nebraska maintained its one-match lead in the Big Ten standings by improving to 10-0 in the league.

In the first set, Nebraska wasn’t able to slow down Purdue much. The Boilermakers had nine kills on their first 13 hitting attempts, and led 15-8. Its lead reached 23-13 before Nebraska mounted a comeback behind a seven-point serving run from Kenzie Knuckles, including an ace dropped in the corner of the court.

The Huskers fought off Purdue’s first three set points, but not the fourth as Caitlyn Newton hit a shot off the Husker block to win 25-23.

Nebraska had won 10 of the final 12 rallies of the set. It was a lost set that nearly felt like a win.

“The shift bringing that set to be 23-25 was awesome, and I think it gave us so much momentum going into the rest of the game,” said Nebraska junior outside hitter Madi Kubik.

To start the match, Purdue was good in serve-receive, which allowed it to run a fast and powerful offense, and the Huskers were a step slow.

Husker coach John Cook was feeling better by the end of the first set.

“I thought we got the crowd into it, we got some momentum, and that just carried for the next couple of sets,” Cook said.

“One of the biggest things we can beat teams with is our block and our serve and our floor defense,” Kubik said.

Newton, Purdue’s leading hitter, had seven kills in the first set, but then just nine more the rest of the match and hit .096.

Purdue finished with a .123 hitting percentage, its lowest of the season.

That meant Nebraska finished the match with 25 more kills than Purdue.

“I thought our floor defense was probably the difference in that match,” Cook said.

Kubik led the Huskers again with 15 kills. But Nebraska’s offense was more balanced than in many matches this season, including gettng a combined 28 kills from the middle blocker spot.

Kayla Caffey had a career high 14 kills. Stivrins also had 14 kills, and Lindsay Krause had 13.

Nebraska put a bigger emphasis on setting the middle. Cook also credited Hames for not being conservative with her sets.

“Kayla and Lauren got some big kills when our outsides couldn’t,” Cook said.

Lexi Sun replaced Ally Batenhorst at the second outside hitter spot early in the second set, after Batenhorst hit into a double block on back-to-back points and hadn’t yet recorded a kill. Sun finished with four kills over three sets on 16 attempts, but hit .000.

Trying to force a fifth set, Purdue got its deficit in the fourth set to 21-20. In crunch time, Stivrins and Kubik teamed up to win a big point on a block. Stivrins had the kill on match point on a slide attack. 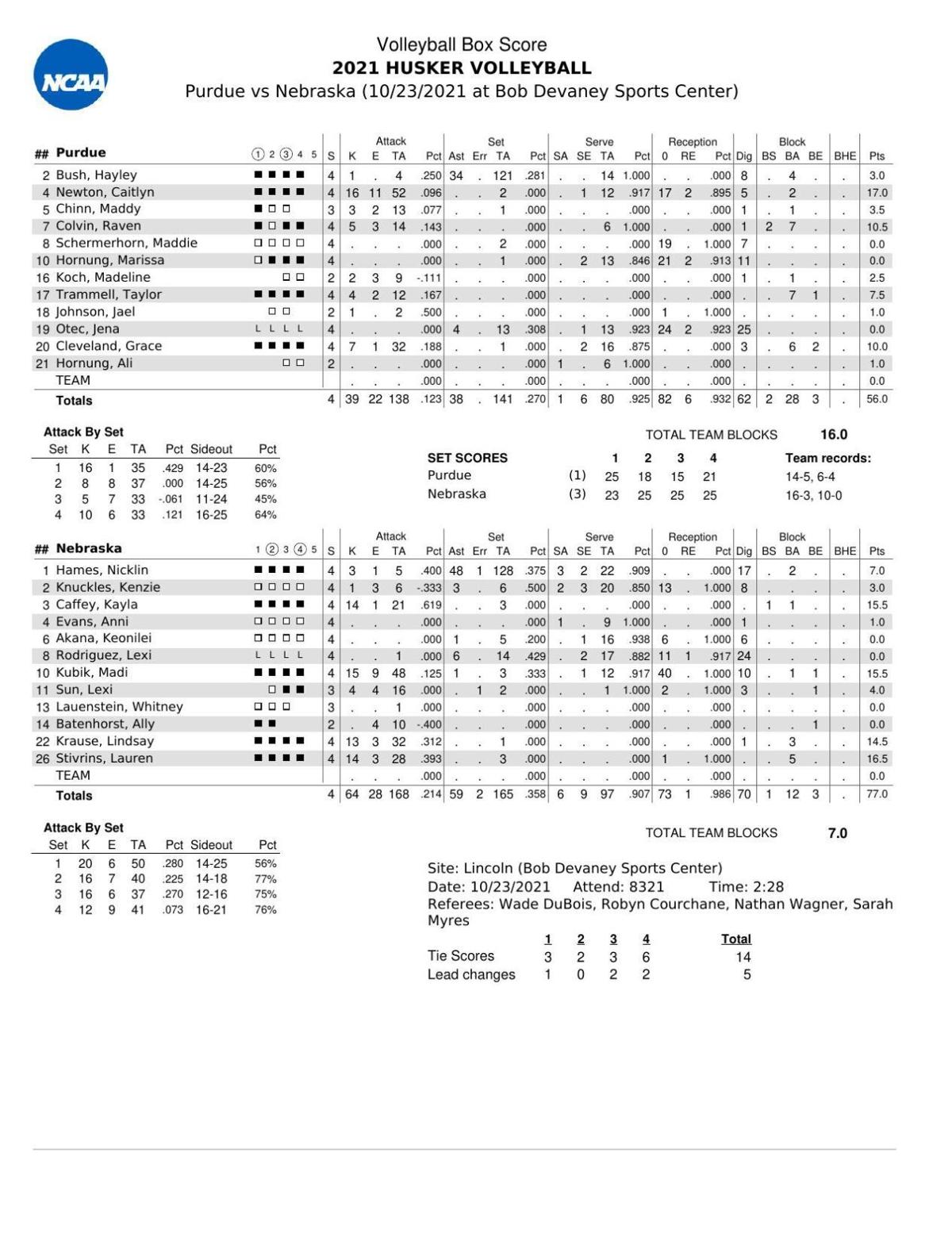 Nebraska’s Kayla Caffey hits against the Purdue block for a first-set kill Saturday at the Devaney Sports Center.

All eyes and cameras are on Nebraska’s Lindsay Krause (22) as she attempts a kill in the fourth set against Purdue on Oct. 23 at Devaney Sports Center.