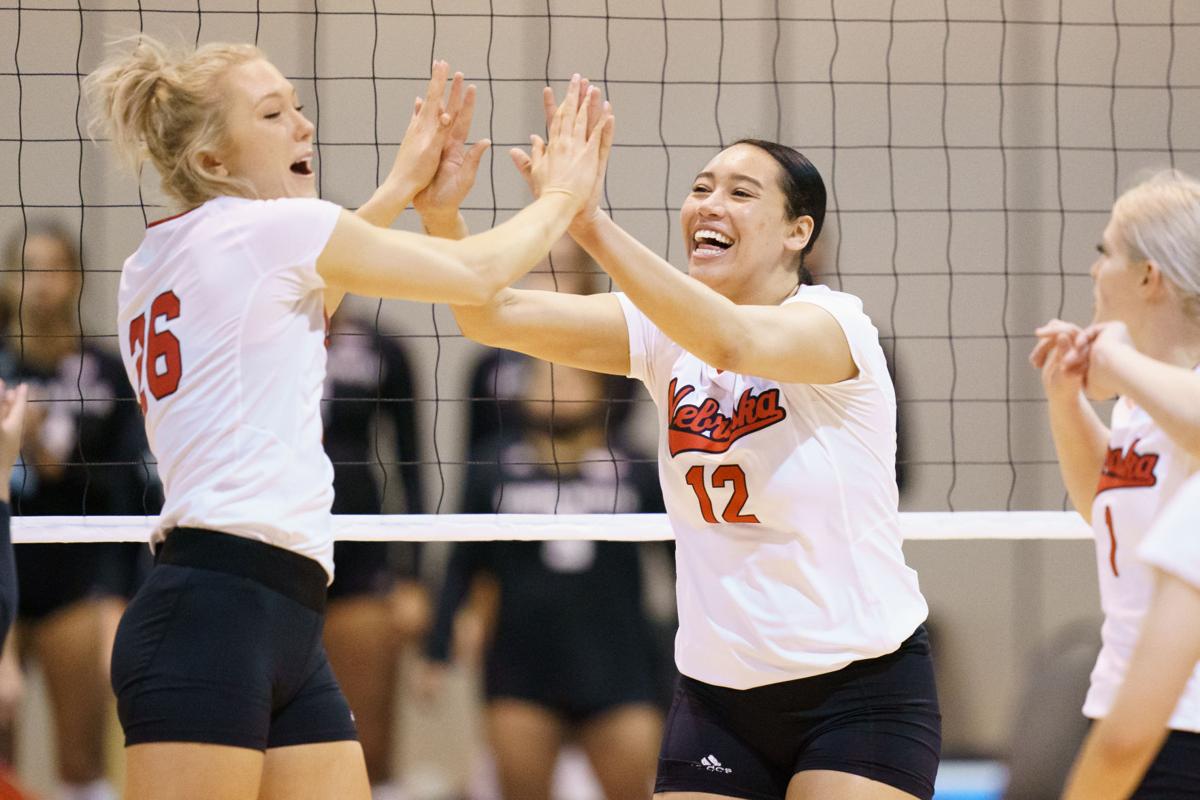 Nebraska's Lauren Stivrins (left) and Jazz Sweet (12) celebrate a kill against Texas State during the second round of the NCAA Tournament on Thursday at CHI Health Center Omaha. 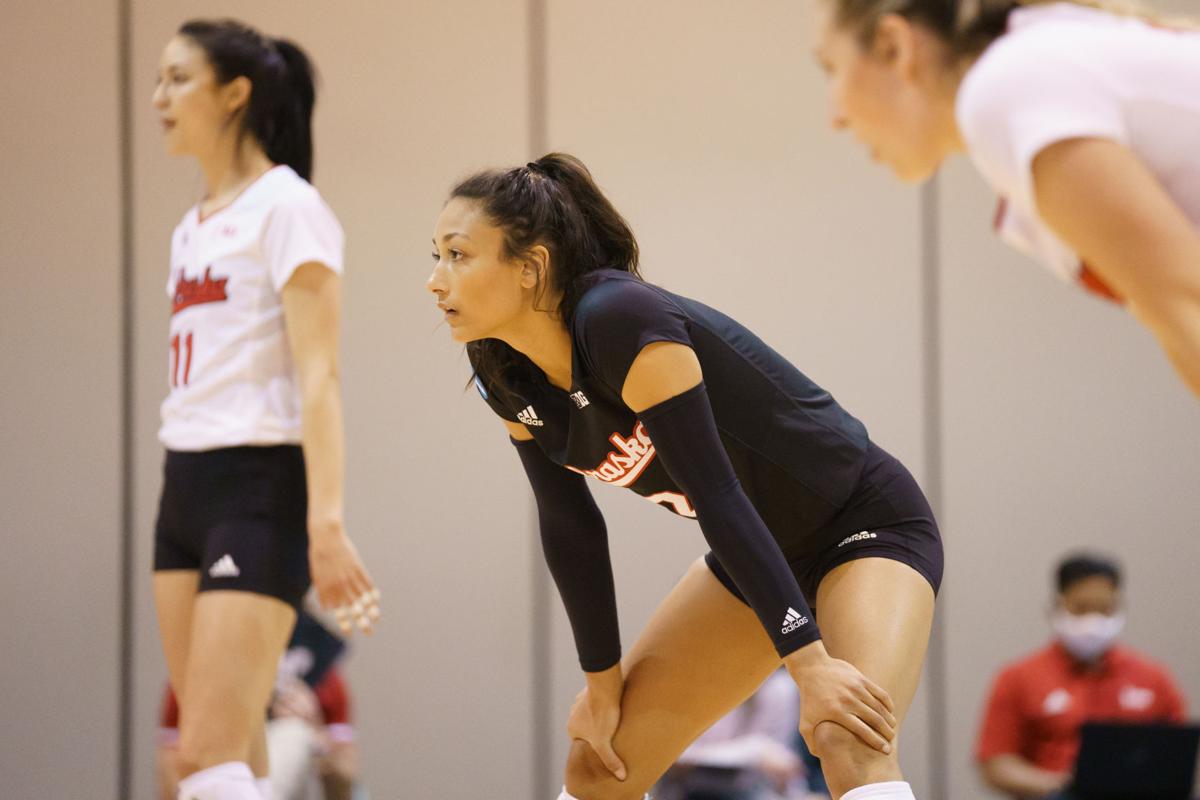 Nebraska's Kenzie Knuckles (middle) and Lexi Sun (left) await a serve from Baylor during the third round of the NCAA Tournament on Sunday at CHI Health Center Omaha.

When one season ends, you never really know for certain what the roster will look like when the next one begins, and that’s especially true right now for the Nebraska volleyball team.

Almost always, at least one player transfers, and sometimes it’s a player you didn’t think was considering it. The added uncertainty about the current roster is because players won’t lose a year of eligibility due to the NCAA’s pandemic exception.

'We couldn't stop them:' Behind offensive firepower, Texas ends Nebraska's season in Omaha

Sea of Red or sea of gray, diehard fans finally get chance to watch their beloved Huskers up close

That means seniors Lauren Stivrins, Lexi Sun, Jazz Sweet and Hayley Densberger could return. The expectation is that they won’t all be back, but none has publicly said what she’ll do.

Stivrins and Sun will likely have professional volleyball opportunities. But if they decided to return, they’d only be adding about eight months to their career as a college athlete. And they’d also have some pro opportunities in January in Puerto Rico or the new U.S. pro league.

Nebraska coach John Cook told the seniors to have an open mind about the potential to return for the fall season, not knowing what the season would be like and if an NCAA Tournament would even happen.

Regardless, six freshmen will join the team this summer, including the top three national recruits in setter Kennedi Orr, outside hitter Lindsay Krause and outside hitter Ally Batenhorst.

Next season there should be a competitive battle for the libero and defensive specialist spots with Kenzie Knuckles, Kaylei Akana and Rodriguez.

Closer to normal: If next season begins on schedule in late August, it will begin in about four months. It’s too early to know if 8,000 fans will be allowed back in the Devaney Sports Center, but there should be fans, and Cook will welcome that in a big way.

“Man, do we miss it, and hope we can get back to normal,” Cook said.

Cook said Monday, when there were about 4,000 fans at Nebraska’s match, it was the first time this season it felt like "a real volleyball match."

"Here’s what I realize, is I never thought how much we would miss having full arenas and big crowds, whether you’re home or on the road,” Cook said. “You really miss that. It’s hard to describe. It’s an empty feeling.”

Final Four field set: After Monday’s matches, the field is set for the Final Four. Kentucky will play Washington at 6 p.m. Thursday, and Texas takes on Wisconsin at 8:30 p.m. Both matches will be televised on ESPN. Kentucky is in the Final Four for the first time.

* Nebraska finished with a 16-3 record, with all three loses coming against current top-10 teams (Texas, Ohio State and Minnesota). Nebraska’s 19 matches are the fewest played in the 46 years of the program. The fewest matches Nebraska had played in Cook’s 21 seasons as Nebraska head coach had been 30, in 2011, when Nebraska lost in the second round of the NCAA Tournament.

* Stivrins finished the season with a .471 hitting percentage. That is the second-best season mark in school history, falling just short of Tracy Stall's record (.473 in 2007).

* Cook has a 77-17 record in the NCAA Tournament as Nebraska’s head coach. His .819 winning percentage at Nebraska is the top mark in NCAA history among any coach with at least 20 NCAA Tournament matches at one school.

* This is the first time in six seasons that the Final Four won’t include two teams from the Big Ten. But the streak continues of 18 straight seasons with at least one Big Ten team making the Final Four.

2021 NU volleyball prospect returns home to learn of her biggest honor yet: Gatorade national player of the year

How's that for a welcome home? Ally Batenhorst tells the Journal Star, "I was crying. "I just started crying and I was just in utter shock."

Larson, Kelsey Robinson and Justine Wong-Orates will try to help the U.S. defend its title at the FIVB Volleyball Nations League in Rimini, Italy.

Nebraska's next NCAA volleyball tournament match will be on TV

The Huskers will play Baylor in Sunday’s third-round match at 1:30 p.m., one of four Sweet 16 matches selected for TV.

OMAHA — The Texas volleyball team knew the crowd at CHI Health Center Omaha wouldn’t be on its side during an NCAA Tournament match against Nebraska on Monday, but the Longhorns didn’t mind much.

Nebraska's Lauren Stivrins (left) and Jazz Sweet (12) celebrate a kill against Texas State during the second round of the NCAA Tournament on Thursday at CHI Health Center Omaha.

Nebraska's Kenzie Knuckles (middle) and Lexi Sun (left) await a serve from Baylor during the third round of the NCAA Tournament on Sunday at CHI Health Center Omaha.