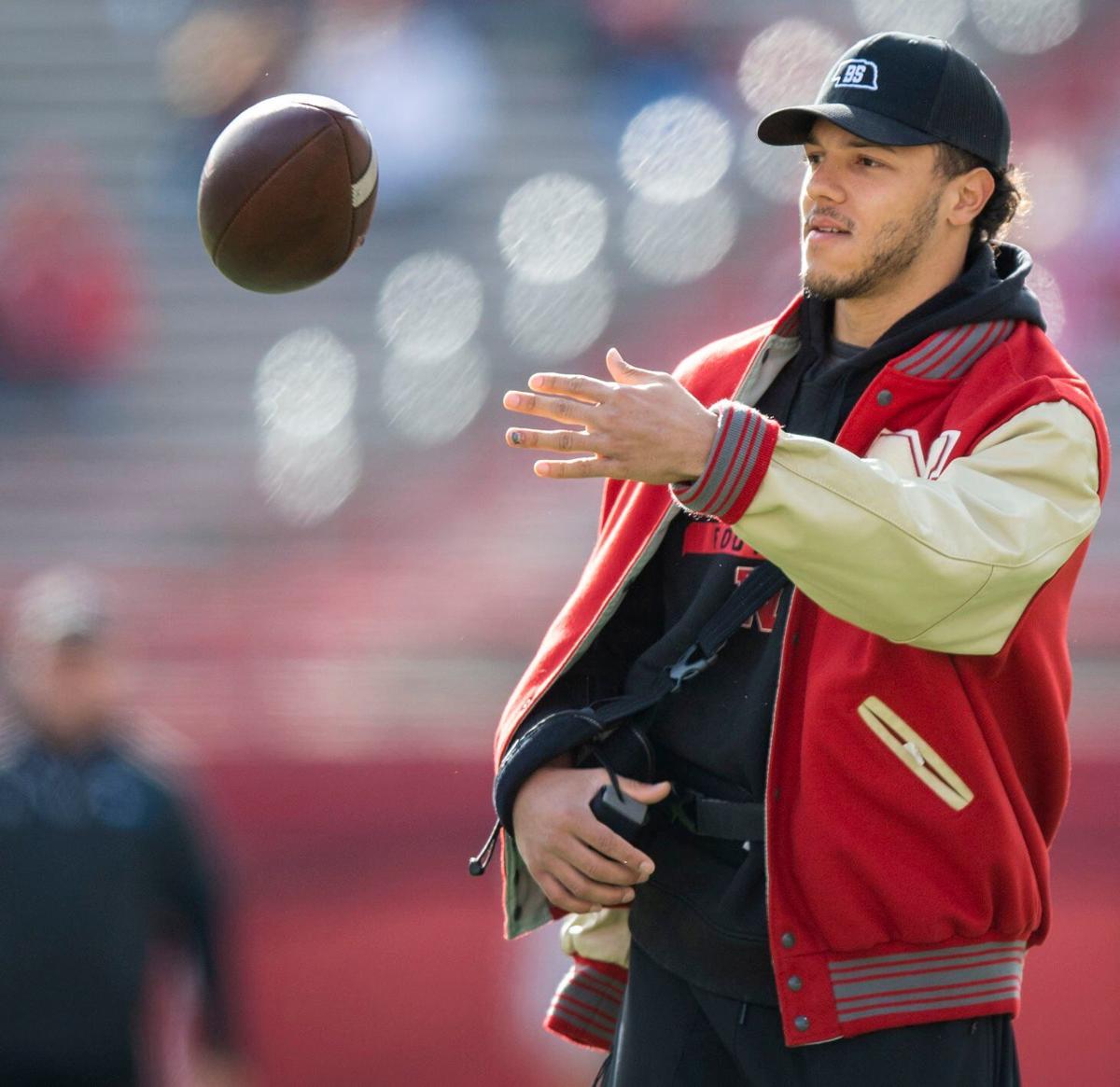 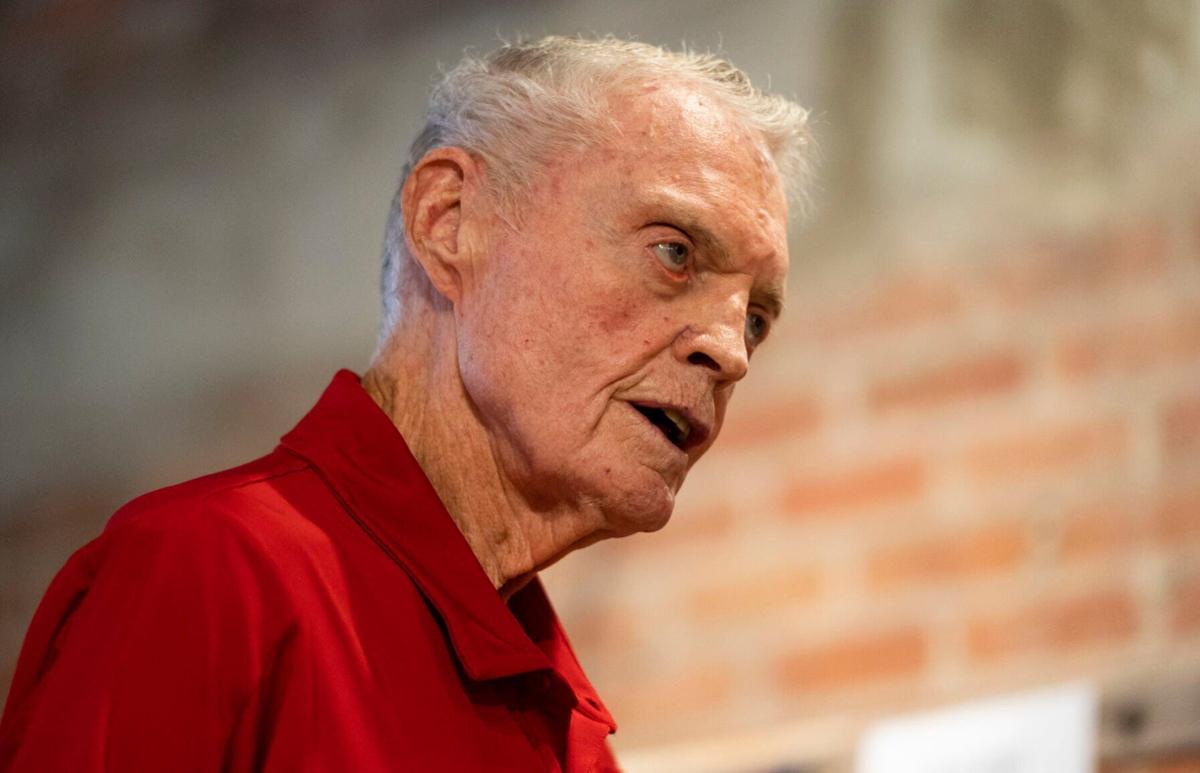 Tom Osborne speaks to the media about his new clothing line on Oct. 1 at Best of Big Red.

Things I know, and things I think I know:

The Nebraska program has everything a kid wants, he says. The objective is to convince players that's the case, and Pierce was exceptional in that regard.

As the Huskers' chief off-campus recruiter from 1985 to 1992 (when there was such a thing), Pierce played a lead role in Nebraska landing Neil Smith, Broderick Thomas, Reggie Cooper and Mickey Joseph, among other prominent names.

Pierce, now retired, has a zillion recruiting stories, and the Joseph story is a good one.

"We covered bases in those days, I guarantee you," Pierce told me Saturday, recalling the ingenuity Nebraska used on National Signing Day in 1987 to close the deal on Joseph — who last week became the Huskers' newest assistant coach under Scott Frost.

You probably already know this, but sometimes a chain-link fence can come in awfully handy. Stay with me here.

During the late 1980s, college football coaches could go to high schools to attend players' signing day ceremonies. Nebraska, though, had a small problem in 1987 on the day Joseph, the Gatorade National Player of the Year as a shifty option quarterback, was ready to sign his letter of intent. The problem: Schools were allowed only so many visits to high schools, and NU already had reached its limit with Joseph at Archbishop Shaw in Marrero, Louisiana.

This is where the fence comes in. Archbishop Shaw's head coach at the time, Hank Tierney, had a chain-link fence erected on the edge of the high school grounds separating Joseph from Pierce and former Nebraska coach Tom Osborne.

"We set up tables on both sides, and handed the letter over to Mickey," Pierce recalls with a chuckle.

Get this: Nebraska in 1987 actually signed the No. 1 offensive and defensive players in Louisiana. Reggie Cooper, a rangy defensive back from Slidell, Louisiana, also chose the Huskers.

"The next day, there was a photo in the (New Orleans) Times-Picayune newspaper showing 'Coop' signing his letter of intent on the hood of my rental car," Pierce recalls. "I couldn't go in the school parking lot, so I parked it in the street in front of the school."

He rented a Cadillac, by the way.

"Anything to make people wonder, you know what I mean?" Pierce recalls with a laugh.

As for Joseph, 53, he takes over as Nebraska's wide receivers coach, passing game coordinator and associate head coach after spending the previous five seasons at LSU.

"Mickey's become a very good recruiter," Osborne told me last week. "I can see why. I can see him as a guy who relates very well to young people. He's a pretty outgoing guy — probably has a fairly good gift of gab.

"Well, I really can't say much," the Hall of Famer said. "I just hope for the best. I do think these next few weeks will be very important because of transfers either way — people who come in and people who leave. And getting a good staff hired will be critical.

"I know Scott's got a lot on his plate, and I try not to bother him."

Osborne, 84, pays close attention to college football in general. Always has. So he understands the potential impact the transfer portal can have on a team.

Six or seven seems like a realistic number of transfers that Frost will try to take from the portal, and maybe more.

One will be a quarterback. Would he take two?

* Sophomore-to-be Logan Smothers seems like the type to embrace competition in the quarterback room. He's all-in at Nebraska, by the way, and the race for the starting job in 2022 has begun. I'm guessing he'll operate with urgency throughout the offseason. Same goes for freshman Heinrich Haarberg.

The 6-foot-2, 195-pound Smothers runs the ball well and showed strong command of the offense against Iowa, but he needs to add strength and get more zip on the ball.

Steven M. Sipple: Martinez's remarkable grace and three other takeaways on his departure

* Although former Nebraska quarterback Adrian Martinez visited Kansas State over the weekend, his transfer-portal tour may not be finished. Rivals.com reports that several schools have reached out to Martinez, including Cal, UCF and Louisville. UCLA also is one to watch. Martinez in Westwood is certainly intriguing.

His girlfriend is a K-State soccer player, which may make the Wildcats the favorite in this race.

* Both Frost and Nebraska men's basketball coach Fred Hoiberg were hired largely for their offensive acumen.

So, of course, Frost is now looking for an offensive coordinator — keep a close eye on Graham Harrell of USC and perhaps Zak Hill of ASU — and Fred's team is shooting 27.2% from three-point range, which ranks 333rd nationally in Division I (out of 350 teams).

If nothing else, the Huskers' struggles in the top two men's sports are fascinating to contemplate.

My unsolicited advice: Maintain a sense of humor, no matter what.

What people are saying about Adrian Martinez entering the transfer portal

Love you brother, best of luck to you. ULTIMATE leader and man.🙏🏾 https://t.co/hbhFzsPBTB

This is heartbreaking. There always needs to be a Martinez at Nebraska. Always https://t.co/dKE64vdB1M

This man right here is a stud any team will be lucky to have him ✊️ https://t.co/4rskpJUXQS

Not many can endure what you have , A true warrior. Love you 2AM https://t.co/CRRY8rr0nX

Big brother for real. Couldn’t have asked for a better mentor, coach and role model. All love 2 ❤️ https://t.co/bW8nxKfp8c

Thanks @MartinezTheQB for everything!!! You poured your heart, sweat, soul, and tears into this program. Thanks for reppin with class. Forever a husker! Good luck in the future. God Bless & GBR!!! 🏈 https://t.co/VpxXlUVakd

Words can’t express how thankful we are for you Adrian! You’re a true role model to our younger generation, and a blueprint for what every young man should strive to be. I hope wherever you end up that they understand you’re far more than just a QB. You’re a leader. Thank you🌽☠️ https://t.co/cSCAd39b2B

Somebody tell him I love him https://t.co/3ohSQxiDkI

The fact that he had to shut off the comments for this post says it all. This dude gave his body up for the Husker faithful often to be ridiculed in return. Always a class act and I can’t thank Adrian enough for his contributions to the program. Best of luck going forward. https://t.co/Tb6HK6f1bR

Thanks for everything, #2. Hell of a player and most of all you represented the school and state with the utmost class and leadership. https://t.co/aKgoPex2mM

One of my favorite husker players in my lifetime. Great player and an even better person. Wishing nothing but the best for #2AM https://t.co/bu51LIRi91

We don't really get to know players on a personal level, but from the first time I talked to Adrian Martinez in Dec. 2017, he's done nothing but impress with how he handles the spotlight, the pressure, etc. All the time.

Wherever he goes next will be better for having him.

Adrian Martinez played his heart out at Nebraska and NOBODY with half an idea of what he was up against ever questioned his character and his heart. One heck of a young man that I’ll be rooting for.
Let the search for a QB begin. #GBR

Class. Leader. Tough (real tough!). Stud. Athlete. Man. Integrity. You know I meant what I said to you. You ever need anything, I'm here 4 u. #huskerQB4Life https://t.co/dObBnAxQbf

Life in the Red Podcast: All the latest on a busy (and fluid) week of coaching searches and recruiting for the Huskers

Tom Osborne speaks to the media about his new clothing line on Oct. 1 at Best of Big Red.