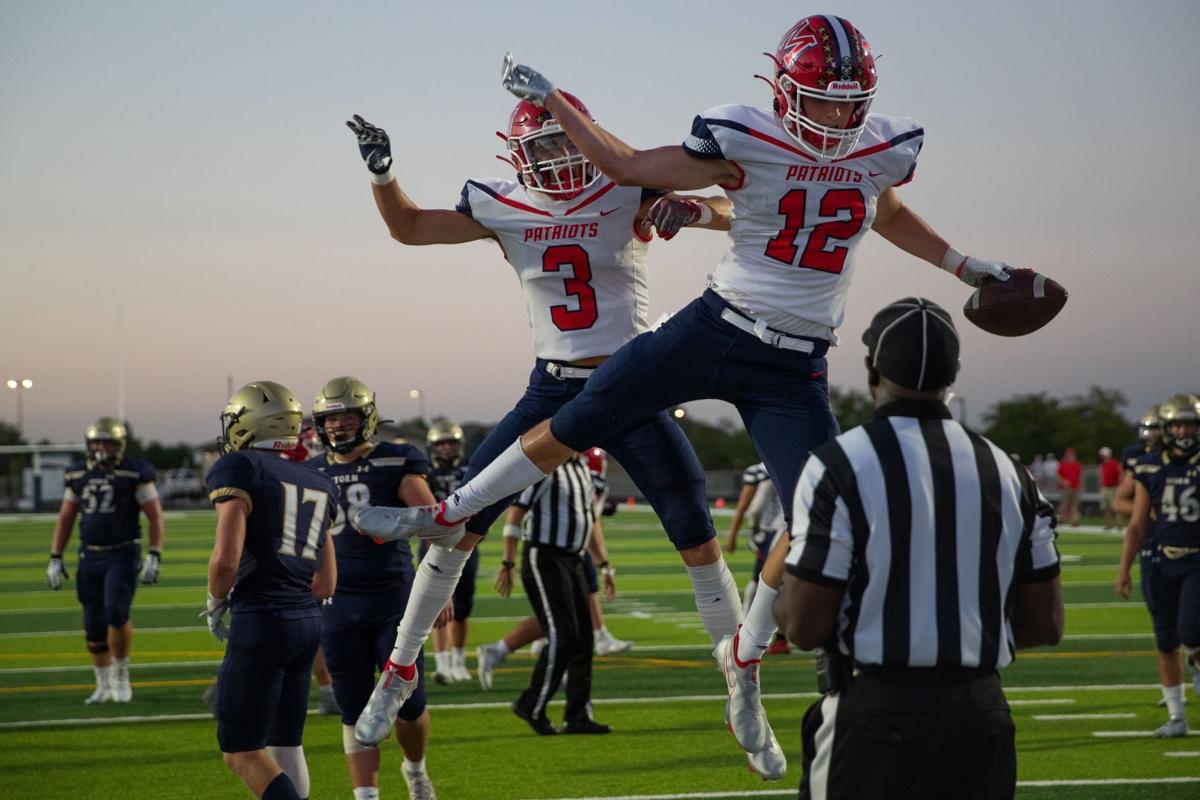 Millard South's Ryan Holdsworth (3) and Gage Stenger (12) celebrate a touchdown against Elkhorn South during a Sept. 8, 2020, game in Omaha. 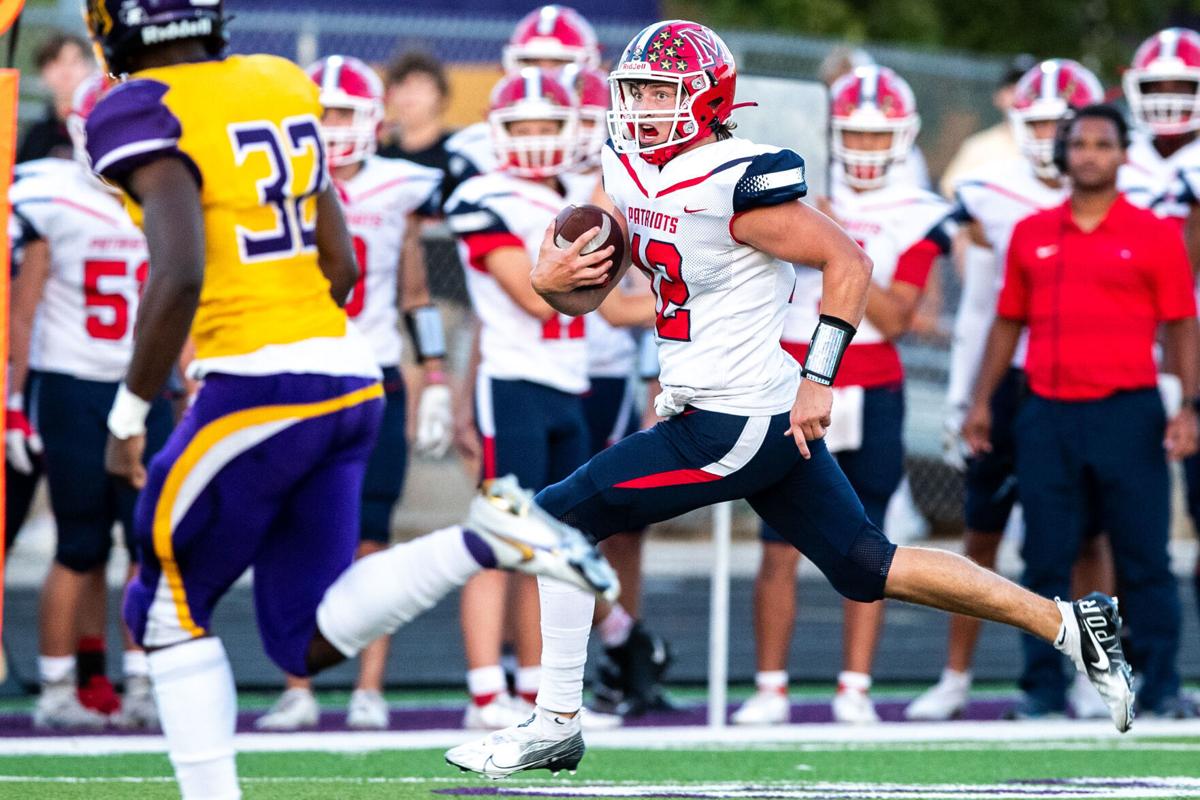 Gage Stenger put on a heck of a show against Bellevue West last month.

Little did the Millard South standout know, it would start a chain of events that culminated with him verbally committing to Nebraska, which he on Wednesday called his "dream school."

Stenger announced his decision to flip his pledge from Kansas State to the Huskers on Wednesday morning, but in reality, the move has been in the works for about a month.

Stenger put up 419 yards of offense and three total touchdowns in a 35-21 victory over Bellevue West last month and said he started hearing from Nebraska not long after, first via text from NU director of player personnel Sean Dillon.

"(Inside linebackers coach Barrett Ruud) talked to me about two weeks ago and we just talked about it and he said, 'Would he be interested in us still?'" Millard South coach Andy Means told the Journal Star. "And I said, ‘He’s a Nebraska kid, what do you think?’ But, I said I thought he’d be interested but I said, 'I don’t know. I know he likes Kansas State and he had the offer and commitment, so I don’t know. You’ll have to talk to him.' That kind of got things going."

"That's when everything really started ramping up and I started hearing from Ruud, (defensive coordinator Erik) Chinander and (coach Scott) Frost," Stenger said.

Stenger, a 6-foot-2, 200-pounder, could end up playing multiple positions in college. He is listed by recruiting services as an outside linebacker but projects to have some positional versatility. Stenger said Wednesday that Nebraska sees him as a potential hybrid nickel like current senior JoJo Domann or potentially an inside linebacker, "depending on my body development."

His high school coach is confident the Huskers will enjoy finding a spot for him.

Huskers Recruit Watch: Hausmann has Columbus off to 6-1 start; Raiola has big night

"He’s got all the metrics. He’s 6-2, 200 pounds. He ran 4.55 (in the 40-yard dash) at a Kansas State camp. He’s got a 38-inch vertical," Means said. "He meets all those requirements, but he’s a tremendous competitor. We’ve seen this in him the last two years. … This is not a surprise to us. He’s just a great competitor, smart, intelligent, great leader and knows what everybody’s supposed to do on offense and defense."

After the scholarship offer, Stenger visited Nebraska last Thursday and got to spend some time with the coaching staff. He also met up with his former Millard South teammate, walk-on running back Isaiah Harris, and Domann.

"He just said, 'Congratulations, I heard they offered you,' and we talked about the opportunity to play at Nebraska and how it's a special program," Stenger said of his conversation with Domann. "The fans and the atmosphere and everything."

Stenger verbally pledged to KSU on June 26, less than a week after the school became his first Power Five scholarship offer.

"I did really like Kansas State's program and I think they have a good thing going over there, but Nebraska is my dream school," Stenger said. "When they started texting me, I felt like I couldn't ignore it and I had to give it consideration."

Stenger has put up huge numbers so far for Millard South. He's completed 68.8% of his passes for 1,095 yards and 11 touchdowns without an interception and rushed for 507 yards (9.6 per carry) and 11 more scores.

Defensively, he's credited with 12 tackles according to MaxPreps after having 51 and an interception in 10 games as a junior.

"My sophomore year I was about 165 pounds and then playing at 195 my junior year, I was just kind of adjusting my body to all of that," Stenger said. "Coming into this year, still weighing around 195-200, I feel like I really fit into my body type right now and being able to use that to my potential. Especially running in the open field and being bigger than a lot of the kids that are trying to tackle me."

Stenger is considered a three-star prospect by 247Sports and a two-star by Rivals.

He is the ninth known member of Nebraska's 2022 class and the third in-state player of the group, joining Columbus linebacker Ernest Hausmann and Lincoln Southeast athlete Jake Appleget.

Stenger plans on playing basketball for Millard South this winter and then enrolling at Nebraska next summer.

Millard South's Ryan Holdsworth (3) and Gage Stenger (12) celebrate a touchdown against Elkhorn South during a Sept. 8, 2020, game in Omaha. 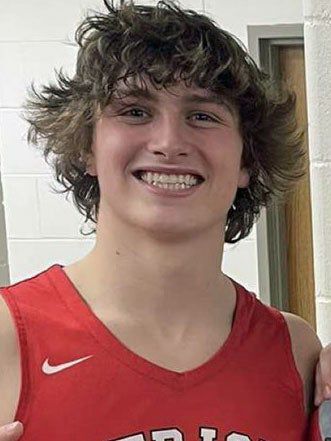