Chance Hroch and his buddies served up bagels for breakfast.

The New Mexico State transfer turned in his second strong start and wiggled out of jams in the third and fourth innings, and three Nebraska relievers combined to allow one hit over the final three frames as Nebraska shut out Iowa 4-0 Saturday morning at U.S. Bank Stadium in Minneapolis.

The victory improved Nebraska to 5-1, the program's best start since 2011, when NU also started 5-1.

"I feel like with our team, we've got a bunch of different ways that we can win," Nebraska coach Will Bolt said on the Husker Sports Radio Network. "And we're kind of showing that right now."

Hroch pitched six scoreless innings while striking out seven and walking one to improve to 2-0 and drop his earned-run average to 1.00.

"He'll give up a few hits (but) he can really execute a game plan, he fields his position, and he made his best pitches when he needed to," Bolt said. "He had some big spots there, and I think he brought out some of his best stuff for those spots."

After that, Sayer Diederich, Max Schreiber, Cam Wynne and Spencer Schwellenbach held Iowa to one hit, though there was some drama in the ninth inning as Wynne walked the bases loaded, and Schwellenbach went to a 3-0 count on pinch-hitter Peyton Williams before getting a strikeout to end the game.

It was the latest in a strong run of pitching performances for Nebraska. After giving up six runs to Purdue in the season opener, the Huskers have allowed just six total runs over their past five games, all wins. Three of those victories have been shutouts.

Nebraska got a solo home run from Brice Matthews to open the scoring in the bottom of the fifth, then scored three unearned runs in the sixth thanks to an Iowa throwing error, a bases-loaded walk to Matthews, and a two-run single from No. 9 hitter Joe Acker.

"It's what you would hope a fifth-year senior would do," Bolt said of Acker. "He's using the whole field, he's taking his RBIs. He's ready to hit, but he's also been selective as well. Even with his outs, he's putting good swings on it. He's doing a good job of turning the lineup over down there and really setting the table."

Acker finished with two hits and two RBIs, while Jack Steil was 3-for-4 with a run scored. And freshman Max Anderson once again swung a hot bat, going 2-for-3 to raise his average to .520.

Matthews' opposite-field homer came after Bolt called his players together to deliver a message before NU batted in the bottom of the fifth.

"The message was that it was a 9 a.m. game and it doesn't have to be a pitchers duel if we don't want it to be," Bolt said. "Sometimes you kind of settle into those games and go 'Well, we're going to have our hands full here.' We needed to have our best approaches of the day, cover the plate, and then Matthews goes oppo right there and kind of sparked us."

NU will play a doubleheader Sunday, starting with a 10 a.m. game against Ohio State. The Huskers will play Iowa Sunday afternoon. 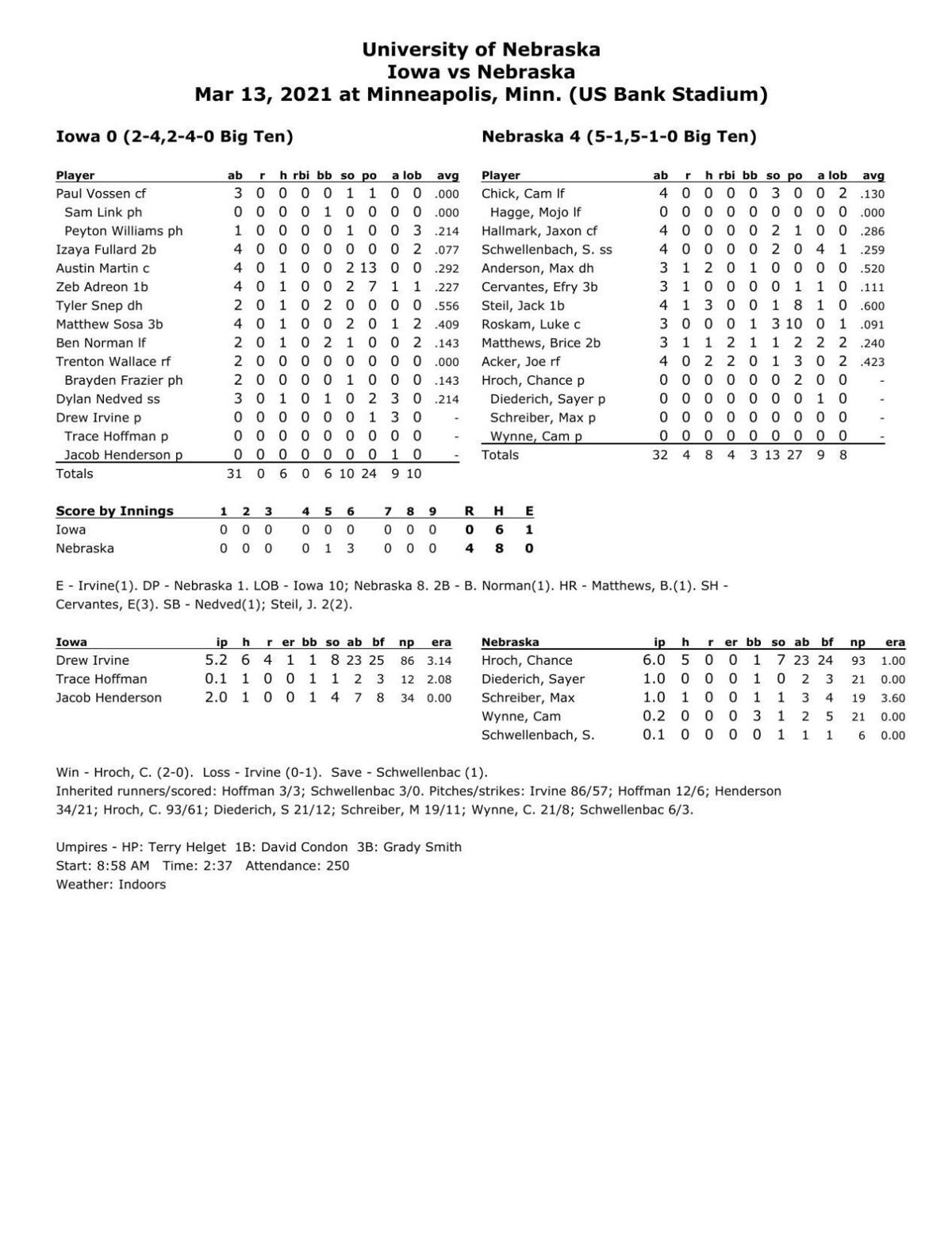 NFL Week 6 Market: Will weather be a factor?

Who will win NFL Offensive Rookie of the Year?

Who will win NFL Offensive Rookie of the Year?

Kyrie Irving says he is not retiring

Kyrie Irving says he is not retiring

Koty Frank threw five shutout innings and struck out seven to lead his Red team to a 4-1 win over the White squad.