Husker Extra Podcast: Wrapping up spring ball and looking ahead to the Huskers' summer

In a game that saw a little bit of everything, nine-hole hitter Griffin Everitt delivered the go-ahead single to score Brice Matthews in the top of the 13th inning to lift Nebraska past Rutgers 7-6 in a wild finish to NU's four-game weekend in Piscataway, New Jersey.

"Goodness gracious, so many weird things happened in that game," NU coach Will Bolt said on the Husker Sports Radio Network.

Start with the fact that the game was a rare Monday morning start, thanks to Nebraska's finals week schedule forcing the Huskers to begin play on Saturday. NU's starting pitcher, Kyle Perry, was making his first appearance of the season 10 months after he underwent Tommy John surgery as the Huskers planned to rely on their bullpen to get through the game.

Things began with Nebraska blitzing Rutgers for six runs on seven hits in the top of the first inning. The Huskers strung together five consecutive hits in the frame, including doubles from Spencer Schwellenbach and Matthews, and a two-run home run from Luke Roskam, who finished 3-for-5 with two RBIs.

NU wouldn't get a runner to third base again until the top of the 10th, when Roskam led off with a double and advanced on a flyout. That was the first of two times in extra innings Nebraska would waste a leadoff double.

Then things got really weird.

A bizarre seventh inning saw Rutgers tie the game at 6-6 thanks to a series of head-scratching moments:

* Rutgers baserunner Victor Valderrama was picked off first base, but after a conference, the umpiring crew instead ruled interference on NU first baseman Roskam and gave Valderrama second base.

* A strike was called on a Rutgers batter for not getting out of the way of a baseball that didn't hit him and instead ticked off the glove of Everitt, NU's catcher.

* A Rutgers batter was called out for using an illegal bat; it did not have a knob on the handle.

* NU pitcher Jake Bunz thought he had strike three on Rutgers freshman Ryan Lasko to get Nebraska out of the inning, only to see the pitch called a ball. Lasko then hit a two-out, three-run home run to tie the game.

From there, neither team could bring a run home until the 13th. Both squads had runners thrown out at the plate in the 12th inning before the bottom of Nebraska's lineup came through.

"There was a lot of things that we would have liked to do better," Bolt said. "But at the same time, offensively, (we) just set the innings up and have a chance to win it. And the defense that we played gave us a shot, and honestly the strikes we threw on the mound gave us a shot.

"We made them earn everything they got."

Other oddities from Monday:

Rutgers got the winning run to third base with less than two outs the ninth, 11th and 12th innings, and couldn't score.

Schwellenbach played the first seven innings of the game at shortstop, then pitched the eighth, ninth, 10th and 11th innings, then played first base for the first time in his career in the 12th and 13th. It was Schwellenbach's relay throw in the bottom of the 12th that cut down Rutgers' Danny DiGeorgio at home plate to send the game to the 13th inning.

And NU pitcher Koty Frank, who gave up four runs while walking three against Indiana on Saturday, closed things out by working an easy 1-2-3 bottom of the 13th inning.

"Baseball's a great game," Bolt said. "Koty Frank gets a chance to redeem himself there, and made it look easy." 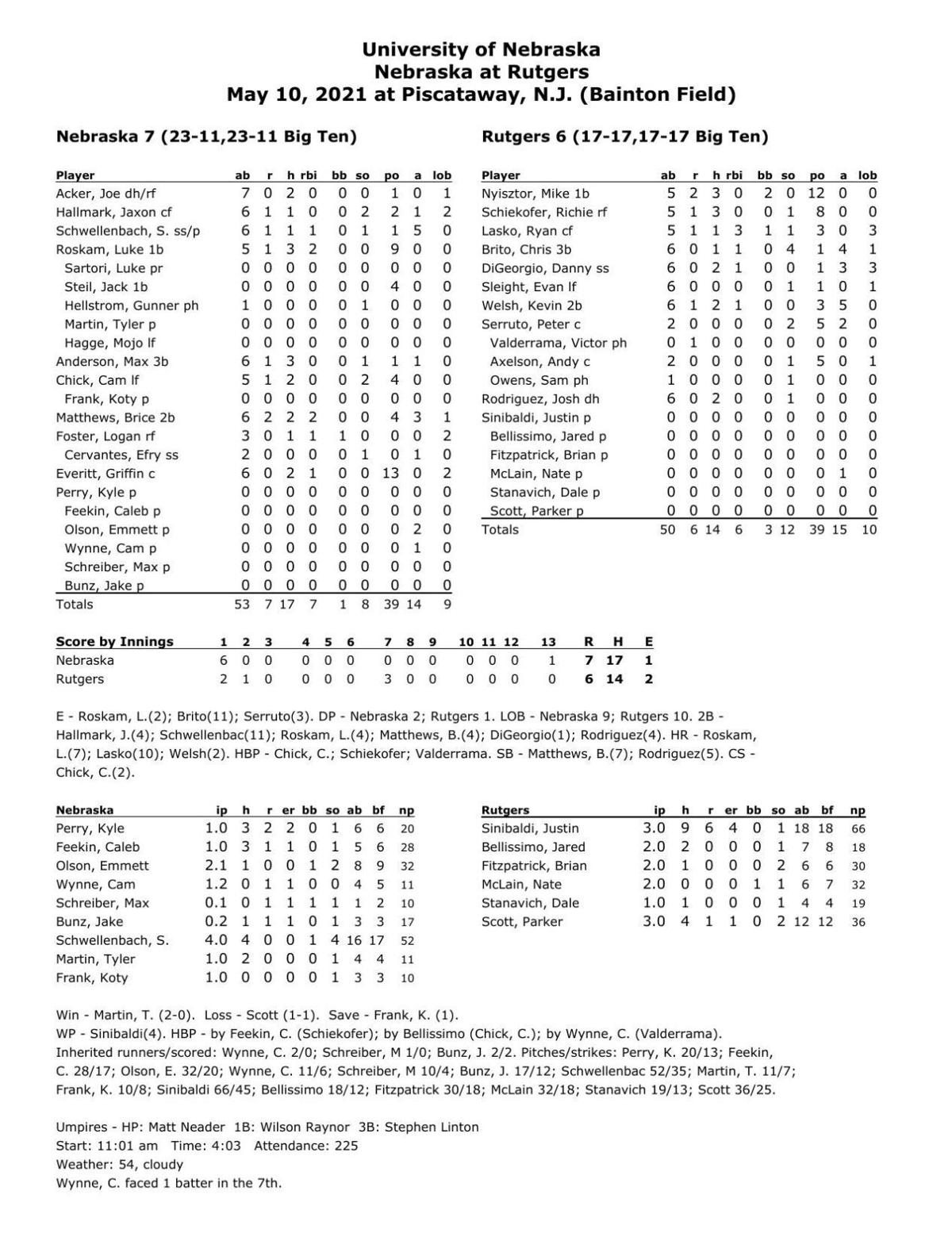 NBA plans to start the new season in October

NBA plans to start the new season in October

Lebron James changing his number because of Space Jam

Lebron James changing his number because of Space Jam

The beauty was in the imperfections. Those who played at Buck say it fit the Huskers: "Hard-working, blue-collar, straight to the point-type people."

Husker pitchers threw 11 straight balls in a disastrous eighth inning, and the Razorbacks scored four times to pull away.

The cupboard is far from bare as the Cornhuskers begin to figure out how to back up their 34-14 season and their first regional final since 2007.

Will Bolt, in his first full season at NU, has a chance to best his mentor and former coach Dave Van Horn, in getting the Huskers to a super regional. Van Horn did it in his third season at Nebraska. Bolt will try to do it in two.

Six Huskers to be inducted into 2021 Nebraska Athletics HOF, and the class shares a theme

Each inductee accomplished never-before-seen Husker feats. Here's a refresher on each member's feats ahead of the Oct. 1 ceremony.

'You got to have that fight': Huskers force winner-take-all regional final with gritty win over No. 1 Arkansas

The win gives the Huskers an opportunity to play for a super regional appearance. Monday's game is set for a 6 p.m. start.

Scoring eight runs in the fourth inning and six more in the fifth, the Cornhuskers blasted NJIT 18-4 in a Sunday afternoon elimination game.

The most anticipated matchup of the Fayetteville Regional begins in about two hours. Nebraska vs. Arkansas. Mentee vs. Mentor. Follow along.

Here we go. Game 7 of the Fayetteville Regional, and Round 3 between Nebraska and Arkansas is set for 6 p.m. on ESPN2.