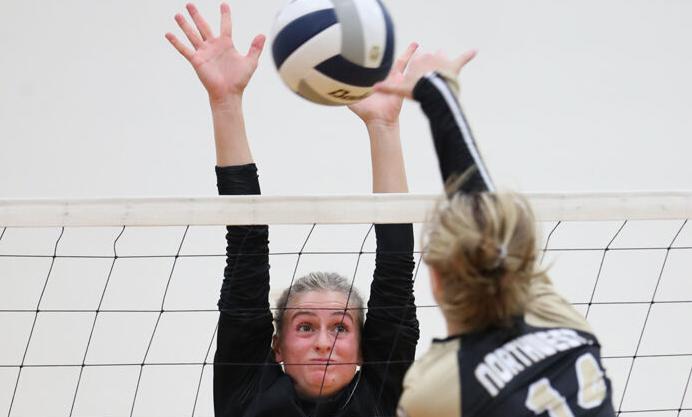 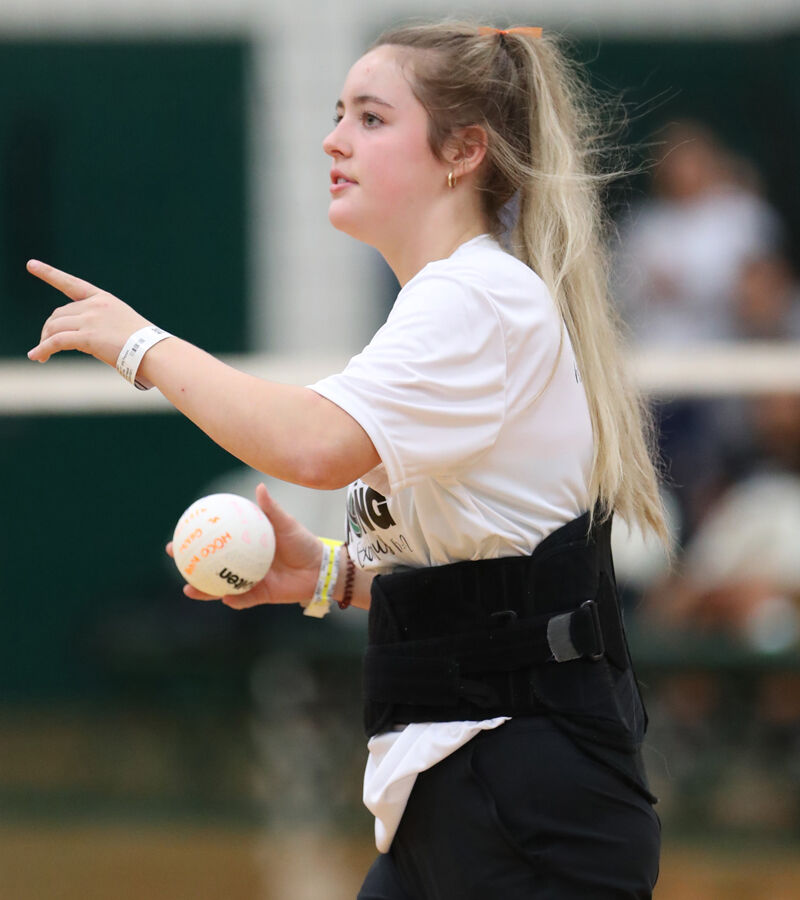 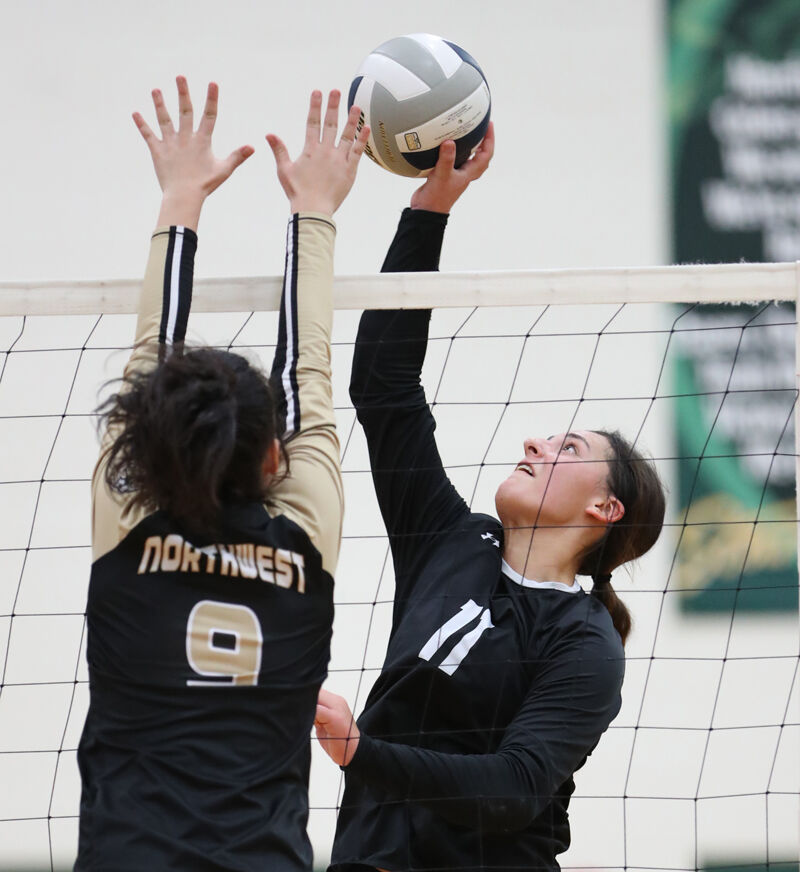 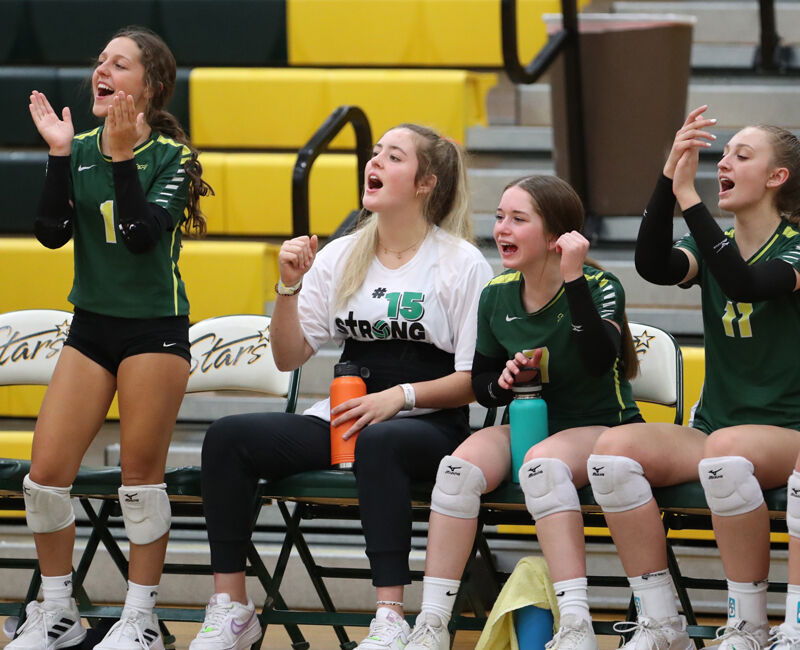 KCHS setter, Sydney Conner, white shirt, cheers on teammates from the sidelines Thursday during the Stars game with Grand Island Northwest. Connor was involved in a car-train crash Wednesday morning on her way to school.

KEARNEY — The best way to describe the last 48 hours for head coach Kris Conner and the Kearney Catholic volleyball team is simply emotional.

The Stars were without their senior setter Syd Conner, who was in a car-train accident Wednesday as she was on her way to school.

Syd Conner was rushed to CHI Health Good Samaritan Hospital after the collision. Kris Conner confirmed on a Facebook post that her daughter suffered pneumothorax (air pocket by lung) and an L2 fracture after the accident.

Fortunately, she was in stable condition, enough for the senior to be on the sidelines to cheer for her teammates. The community rallied behind the Missouri Southern commit after her name was called during the starting lineup.

“It’s been tough. I don’t know if people kind of knew what happened. Syd was in a collision with a train,” Kris Conner said. “She got really lucky, but you still don’t know. With times being there, you don’t know what’s going on. Of course, with the school and team it has been an emotional roller coaster.”

There’s no timetable for a return by Syd Conner. The Stars marched on with their triangular against Grand Island Northwest and Lexington High School on Thursday.

Sophomore Cal Squiers stepped in the starting role at setter. Kris Conner wasn’t concerned about making the lineup change when she added Squiers.

“Cal Squiers did a good job for us. She did a lot of setting for us this summer, so it’s not like it was anything new,” Conner said. “Just kind of getting used to being in a game mode and timing. It was a new rotation for her, but she did fine.”

Unfortunately, the Stars suffered their first loss in their opening match against Northwest. The Vikings won in two sets, 25-20, 25-21. The Stars came from behind the entire time, which is unusual for them.

“First game back would be different with a different lineup,” Kris Conner said. “You wish maybe it would be a little easier instead of coming right after Northwest. A couple of parents said that was a good game for them. But no excuse. It makes us better down the road.”

Northwest led by as many as three points in the final set. The Minutemaids kept fighting and would keep the score even but did not have enough to catch a lead. After tying the game at 22, the Vikings picked up three straight points to take down Lexington and go 2-0 to end the night. Northwest moves to 7-7 on the season.

After going through a dogfight with the Vikings, the Minutemaids were in another three-set match with the Stars. The teams were battling back and forth early in the first set. The Stars went on a big run when they scored seven straight points made by both Ashley Keck and Margaret Haarberg, in which both combined for 30 kills on the night. An ace by Josie Denney gave the Stars the win in the first set, 25-10.

The Stars were coming from behind in the second set due to timing errors. The Minutemaids led by as many as five points. The Stars made a quick comeback to even the score at 15. After tying at 18, Lexington put up two more points to give them a 20-18 lead.

One came from an ace by Liah Haines, who led the Lexington with seven service points. Lexington went on a 5-0 run and was ahead 22-18. Lexington eventually took set No. 2, 25-20, forcing a third set. Kearney Catholic was in front early on, but the Minutemaids were not far behind and even tied the game at 15.

Lexington remained competitive the whole way, but a serving error clinched the win for the Stars, 25-22. Aibrey Mandernach finished strong for the Stars as she picked up seven kills.

Taylor Woehrle and Cordelia Harbinson both tied for six kills for Lexington. The Minutemaids left the triangular winless and are now 9-9 on the season.

The Stars go to 15-1 after splitting their triangular.

KCHS will have a tough road ahead starting on Saturday when they compete at the Aurora Invitational.

“It will be a good test for us on Saturday for sure,” Conner said. “We start with Crete, and then we’ll probably see Lincoln Christian maybe in the second round, and then you got Lakeview and Waverly on the other side. So it’s going to be tough, and we got to quickly improve and fix some unforced errors in the next few days.”

- Amherst defeated Hi-Line 25-9, 25-16 in its other game of the triangular at Amherst. Hadwiger had nine kills and five ace serves. Herrick had seven kills and Prickett had four aces.

The collision ejected the car’s engine from its compartment.

KCHS setter, Sydney Conner, white shirt, cheers on teammates from the sidelines Thursday during the Stars game with Grand Island Northwest. Connor was involved in a car-train crash Wednesday morning on her way to school.