Sean Hampton attempts to hurdle on a defender as he fights for extra yardage for the Gibbon High School football team. Courtesy Photo/ Heather Santiago

Sean Hampton takes a group picture with his extended family in front of a car. Hampton moved to live with Heather Santiago, who raises eight other children.

KEARNEY— Sean Hampton will be moving on from playing football after Saturday’s Nebraska Shrine Bowl, but he will be on scholarship after accepting a $10,000 scholarship from the Salvation Army.

Hampton was not aware that he was a finalist for the D.J.’s Hero Scholarship until after receiving it.

“I didn’t think I was going to get it, but my teacher just told me to tell my story, and when I got it, I was pretty stoked,” Hampton said.

With his tuition already paid for from other grants, receiving another scholarship helped the Gibbon High School graduate avoid college financial struggles — a struggle he’s dealt with his entire life.

What won the people over was an inspiring essay about his childhood and growing up in an unstable environment. At first, he was uncomfortable revealing his past but eventually got over it as soon as he realized a positive outlook when opening up about his experiences.

“At the end of the day, it was going to help me receive some money for college so I can help my future rather than try to hide my past,” Hampton said. “I was like, ‘whatever,’ it’s going to come out sooner or later.”

The hardest memory he had to reveal in his essay was his life at Sutherlin, Oregon.

Hampton was born originally in Ulysses, Kansas, and grew up in Gibbon in his early childhood years. Hampton and his family eventually would wander off and live a life of a nomad. They found their way to Sutherlin, where he lived in a rural environment surrounded by drug addicts and abandoned households, living in a camper without water, food or electricity. While they moved around with a camper, it was tough finding a spot to park it.

“Everything was so much more expensive than we thought, and also my parents didn’t have any good credit history at all, so when we moved down there,” Hampton said. “It wasn’t an easy way to get a house. There is a lot of people that leave abandoned houses there and trash it because they’re on drugs, so it was hard to get a house down there, especially with my parents’ background check and a whole bunch of credits that we don’t have.”

Hampton and his mom moved back to Ulysses in a trailer park where he grew up. He reached out to his childhood friend Elijah Harper and his mom, Heather Santiago, to see if he could stay with them. Before his eighth-grade year, Hampton returned to Gibbon to stay with Santiago.

As he moved in, Santiago laid down the ground rules. While he would be taken care of as his legal guardian, Santiago made it clear that she didn’t take him in to baby him.

“He was at an age where he could kind of be influenced one way or another,” Santiago said. “Ever since he came to live with me — and even when he still lived in Nebraska, he was with us all the time anyway — but when he came to live with me, it’s just always been a rule with him and the rest of my kids. They just have to go to school, work and do sports. They couldn’t just lay around. I tried to do my best to keep him busy and surround him with good people.”

The best advice she gave Hampton that stuck with him was “if you don’t stand for something, you will fall for everything.”

“She was a real strict lady when it came to getting in trouble,” Hampton said. “Obviously, she’ll defend you until the end, even if you were in the wrong, but whenever we get home it’s not going to be a cakewalk. She helped me get through high school. She helped me with all the finances getting a car. She has done a lot for me.”

Santiago owns Kearney Village Transitional and Sober Living. She is a single parent of four children but also a guardian of five more, including Hampton. So, Hampton was living with eight children under one roof.

But Santiago treated him like her own and raised him to know about survival and productivity.

“I’m an honest parent, and I don’t shelter my kids,” Santiago said. “I always raised him with the reality of what the world was. If he’s hungry, there’s no one that’s going to feed him except for him. He’s got to work and got to do the things he has to do. I always told him to be honest, humble and just work hard and just do what you’ve got to do.”

Santiago believes that Hampton was the missing piece of her family because of how dependable he is. She compares him to a chameleon, who can blend in to any places in which he chooses to pursue.

“Sean has always been the caretaker of the people around him,” Santiago said. “He always seems to be the more mature and responsible one. He was a kid with a laid back personality that kind of took care of everything and has always been a respectful kid.”

Hampton went on to play football at Gibbon, where he started at running back and linebacker all four years. He said football was one of the favorite times in his life. Football put him on the right track, and he took school seriously.

“If football wasn’t there, I probably wouldn’t be that good of a student,” Hampton said. “I never knew what football was like. All I knew was school. I didn’t like school when I was a kid because bouncing around from different schools, I was always the new kid, so I didn’t like going to school. When I moved here, I started to like school a lot more, and then that led to me wanting to play football, I had to get my grades up. I started to become a better student in the classroom.”

One of his favorite teachers who pushed him to do better with grades was Amanda Stark, Hampton’s math teacher and adviser.

“Sean’s story is nothing short of amazing,” Stark said in the Salvation Army news release. “Growing up, he was in a family situation no one should ever have to experience. But he has grown into a young man, who has chosen not only to better himself, but to help better those around him.”

Hampton will be playing his last high school football game at the Shrine Bowl at 6:05 p.m. Saturday at Ron and Carol Cope Stadium at UNK’s Foster Field. He will suit up for the South team, where he’ll be reunited with his old coach, Mark McLaughlin. McLaughlin coached Hampton in his first two seasons at Gibbon before accepting a head coaching job at Platteview High School in Springfield, Nebraska.

“He made football so much more fun,” Hampton said. “He was such a good coach and I felt like we had a good relationship.”

McLaughlin described Hampton as a raw, athletic talent with a slight build. He put him in a zone-run scheme where he has to read his blocks. Once he finds a hole and cuts inside, there’s no stopping him.

“When you see Sean outside of pads, he doesn’t really look the part,” McLaughlin said. “He’s not a very intimidating or athletic looking kid, but once he gets between the white lines, he’s a different animal.”

Gibbon went 0-9 in Hampton’s sophomore season in 2018, but it was a breakout year for him as he rushed for 1,197 yards and seven touchdowns. A chunk of his rushing yards came on Oct. 12 when he broke the state record after running for 422 yards against Grand Island Central Catholic. The next year he rushed for 923 yards and six touchdowns, and last season he rushed for 507 yards and four touchdowns.

Hampton’s effort was the reason McLaughlin wanted him on his South team in the first place.

“With games like this, an all-star game, if you get kids to play hard for something that some people would consider to be just an all-star game, it doesn’t really matter,” McLaughlin said. “We want to go play. We want to play a real football game and that means kids who want to play hard, and I think Sean will absolutely do that. That was one of my favorite things about him at Gibbon, and that’s one of things I’m looking forward to having him for a week out here in Kearney.”

Once the Shrine game is over, Hampton will be a full-time student at UNK. He has high expectations in his first semester as a scholar. He plans to study business with hopes to start his own company and be his own boss.

“First goal for sure is to keep my grades up above a C, or I won’t be able to keep my scholarship,” Hampton said. “I want to get as much as I can in my career field so I can make money fast and start a business that I want to do as soon as possible and have as much knowledge about it.”

Sean Hampton will be moving on from playing football after Saturday’s Nebraska Shrine Bowl, but he will be on scholarship after accepting a $10,000 scholarship from the Salvation Army.

KEARNEY — Dennis Thorell has seen a lot of changes in the world of sports since he was a three-sport star at Loomis.

Much like his fastball, Drew Christo knows only one speed. The Super-State captain will soon see where it takes him

Drew Christo has 15 to 20 pro scouts showing up for games. He's likely to be drafted next month. Then it's decision time: college, or pro ball?

Hub Territory Male Track Athlete of the Year: D'Andre Ndugwa lit up the stopwatch until the end

Ndugwa expects to be the top returner for the KHS track and field team as he enters his senior year.

OMAHA — Somehow, the track gods were looking down on Kearney Catholic’s 4x400 relay team on the second day of the Class B Nebraska State Track…

She tried the 200-meter dash and the high jump, but she found her home in the shot put ring.

KEARNEY — After an odd year of limitations, the 2021 Shrine Bowl will have no restrictions or guidelines.

Sean Hampton attempts to hurdle on a defender as he fights for extra yardage for the Gibbon High School football team. Courtesy Photo/ Heather Santiago

Sean Hampton takes a group picture with his extended family in front of a car. Hampton moved to live with Heather Santiago, who raises eight other children. 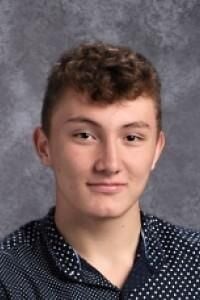