The South Team takes a team photo at Harmon Park. Some of the players of the roster include Gabe Van Winkle and Jack Johnson of Kearney High School, Logan O’Brien and Cale Conrad of Kearney Catholic and Sean Hampton of Gibbon High School. The South team plays the North Team at 6:05 p.m. Saturday at UNK’s Cope Stadium. 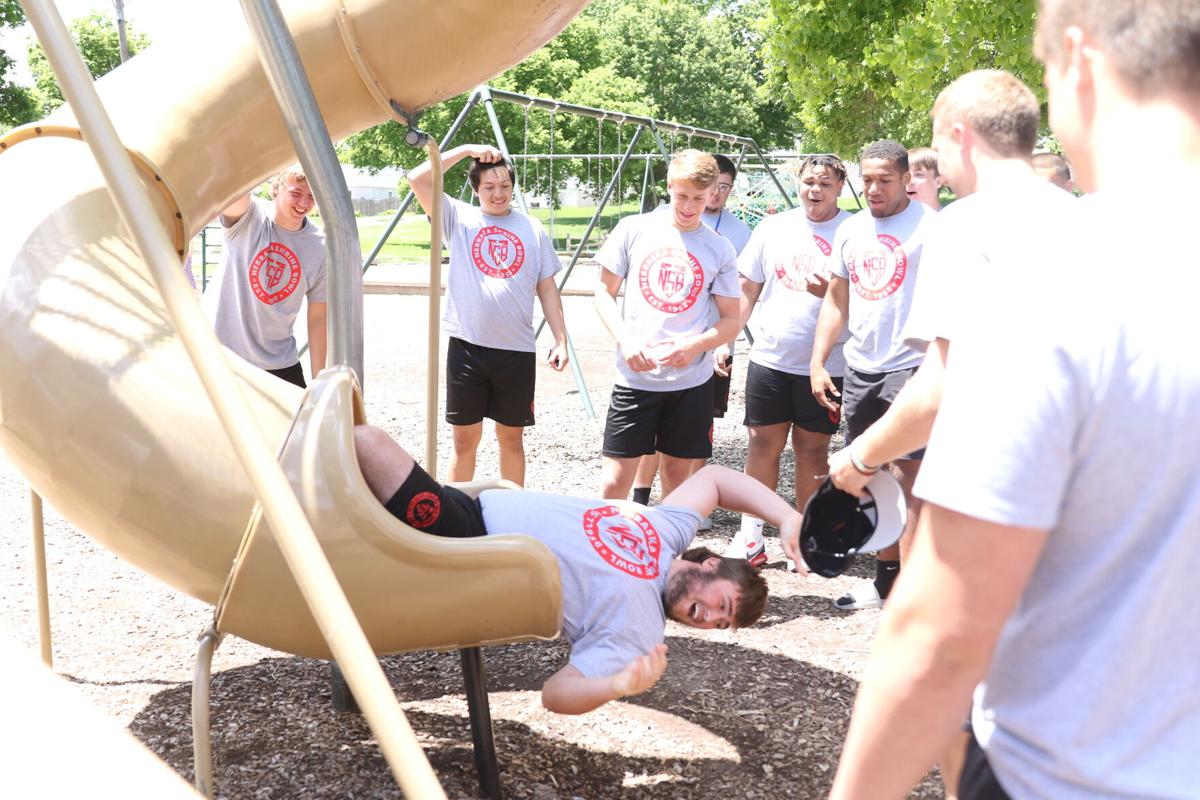 S-E-M's Carson Rohde tries to extricate himself from a childen's slide during the Shrine Bowl's 'Beyond the Field Experience' Tuesday at Harmon Park. Rohde, who played six-man football for the Mustangs, is getting his first taste of the 11-man game with the Shrine Bowl.

KEARNEY — The 63rd annual Shrine Bowl will be played Saturday evening at UNK’s Cope Stadium with area talent being showcased.

Carson Rohde of Sumner-Eddyville-Miller High School will be the lone representative from the Tri-Cities area on the North team. Rohde was a star athlete in six-man football and was state runner-up in the shot put. He will be playing his first 11-on-11 competition. Getting a week’s worth of practice and going toe-to-toe against the top high school defensive linemen in the state on Saturday is what he needs before leaving for the Concordia University at Seward.

“I’m still adjusting to the offensive line,” Rohde said. “It’s a little different fo me coming from six-man, playing running back to 11-man on the O-line. I’m still trying to get used to learning how to run-block, the base blocks, and things like that. I’m just getting used to all those things.”

Rohde expects to play left guard for the North team. His teammates and coaches had been giving Rohde some pointers and they keep pushing him every practice.

“They are just really fun guys,” Rohde said. “I came here and thought that they were going to be cocky, arrogant. These guys are really cool. I think the lineman have been teaching me everything I know this week, and it’s been really helping me out a lot.”

Rohde is also excited to be playing at Cope Stadium for the first time.

“I’ve always wanted to play there because the six-man championship is there. We didn’t get the opportunity this year, but I’m just glad I will get to actually experience a turf field before I go down to Concordia and play.”

hhh“When you are in that stadium, it feels different,” Conrad said. “Like looking around, it feels cool.”

O’Brien will be playing a different position during the Shrine game. He will be playing defensive end this weekend instead of his usual outside linebacker spot. While it may be a minor adjustment for the future Eagle, he doesn’t have to worry about putting his hand on the dirt.

“We didn’t know if we had to go three-point stance or not, and I’ve never done a three-point stance before so we didn’t have to, luckily. There are some rules like we can’t do blitzing or anything,” O’Brien said. “It’s pretty much straight up take your gap.”

Johnson mentioned how he enjoys living the dorm life and has been communicating with his future teammates who will also be at UNK this fall, including his soon-to-be roommate, Michael Brands, a linebacker out of Oakland-Craig High School, who is playing on the North team.

“I like being in the dorms because it’s giving me that college experience and just getting used to next year. It’s also nice to be away from home a little bit too and just meeting new people.”

Van Winkle will be playing his last game at Cope Stadium, which is also the home field for KHS. This fall he will move on to play football at Midland University.

“I’m just honestly looking forward to just suiting up one last time, representing the Kearney Bearcats. There’s obviously some big schools, small schools, but all I really care about is making sure what Kearney is all about, and just playing one last game that I love here in my hometown.”

Sean Hampton will represent Gibbon High School at running back. Hampton began making his mark early in his high school career when he broke the state record for most rushing yards in a game after his 422-yard performance in 2018 against Grand Island Central Catholic. Hampton was a sophomore then. Now a senior, he will move on from football and focus on school full-time when he enrolls at UNK this fall. Hampton will reunite with his former Gibbon coach Mark McLaughlin as he will be coaching the South team.

“He made football so much fun,” Hampton said. “He’s been such a good coach. I’ve felt we had such a great relationship.”

McLaughlin is looking forward to coaching Hampton one more time, showing the fans what the game means to the South team.

Here’s why the Green Bay Packers should trade Aaron Rodgers

Ord’s Kelen Meyer looks forward to walking on at Nebraska

KEARNEY— It was the second week of last season when the Ord High School team faced Central City, and Kelen Meyer lined up for a 58-yard field …

Saquon Barkley seemingly is vaccinated for COVID-19, because he watched Tuesday’s Giants minicamp practice from the cafeteria and interacted with colleagues with no mask on.

Why are so many NFL players still reluctant to get vaccinated? League’s union head said it’s not because of a lack of information.

DeMaurice Smith pleaded ignorance Thursday when the NFL players union boss was asked on a conference call for the vaccination rate of his rank and file.

The South Team takes a team photo at Harmon Park. Some of the players of the roster include Gabe Van Winkle and Jack Johnson of Kearney High School, Logan O’Brien and Cale Conrad of Kearney Catholic and Sean Hampton of Gibbon High School. The South team plays the North Team at 6:05 p.m. Saturday at UNK’s Cope Stadium.

S-E-M's Carson Rohde tries to extricate himself from a childen's slide during the Shrine Bowl's 'Beyond the Field Experience' Tuesday at Harmon Park. Rohde, who played six-man football for the Mustangs, is getting his first taste of the 11-man game with the Shrine Bowl.