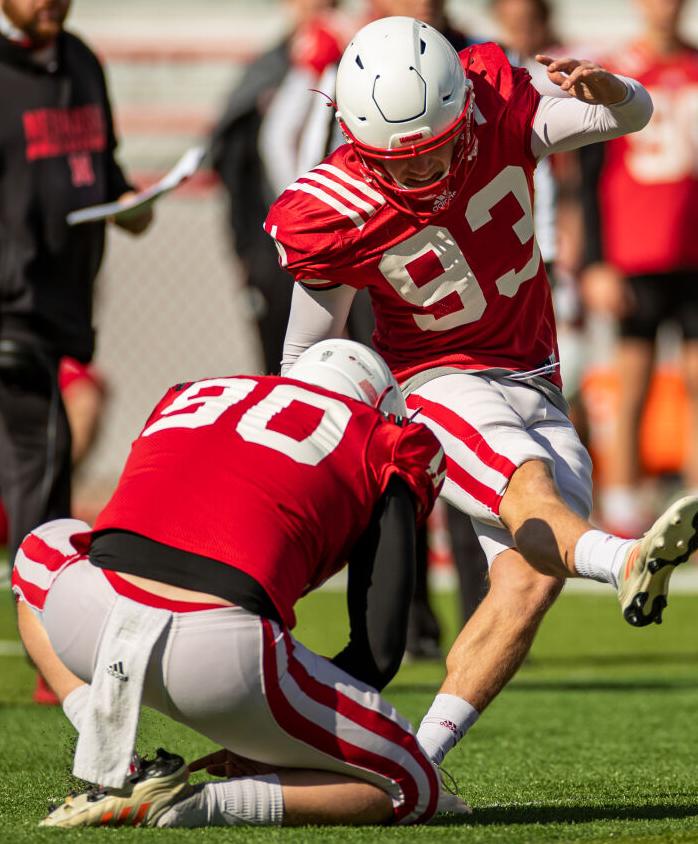 Kearney High graduate Gabe Heins (93) kicks during spring practice earlier this month. Heins is in his third year with the Huskers but he’s still considered a redshirt freshman as he bids for playing time this fall. 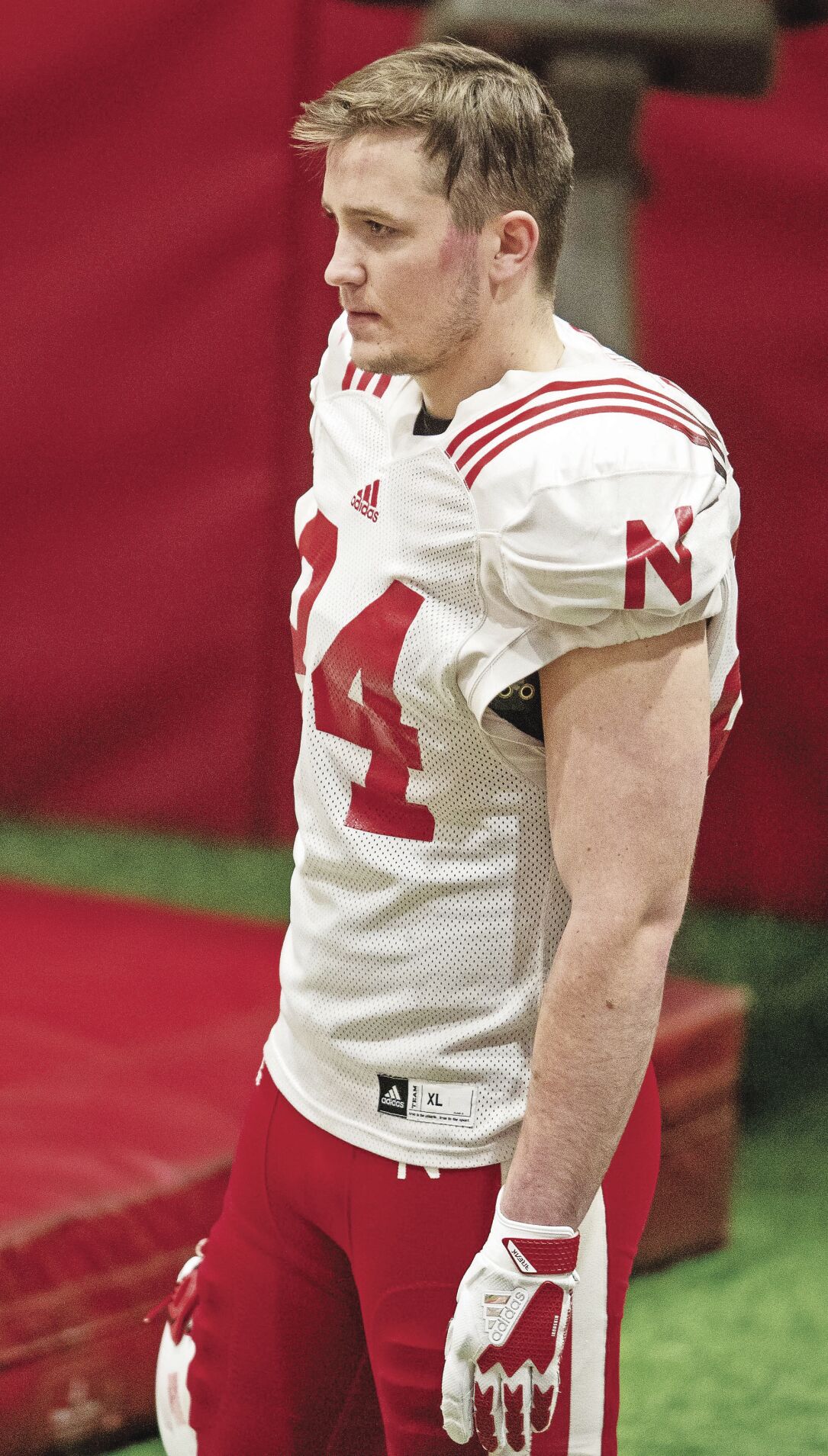 Nebraska's Eli Richter waits his turn during spring practice at the Hawks Championship Center on Wednesday.

LINCOLN — Gabe Heins and Eli Richter found their way onto the Nebraska roster, and it took some connections to get them there.

Because Nebraska coach Scott Frost values the local talent in the state, it made things easier for the Kearney natives to join the program.

“Just playing with Coach Frost, he’s a great guy,” Heins said. “Playing under his coaching staff is pretty awesome. They are doing the right things. Someday we’ll be winning bowl games and winning national championships. It’s pretty easy for us Kearney kids to walk into a program with that and be happy and find success. I think we are all finding success.”

Kicking it with Heins

Heins is a reserve kicker for the Huskers. He’s not only been a Husker fan his entire life, but his dad, Mike, was a member of the Huskers where he played safety. Also, defensive analyst Bill Busch recruited Heins while as a graduate assistant. Adding together all three factors, he knew that joining the Cornhuskers was the best decision for him after graduating from Kearney High.

“It made it pretty hard not to pick Nebraska, especially that my dad played there. It’s pretty good to know them and have a history with them and know them as well,” Heins said. “It was super hard to not choose Nebraska. It’s home, still feels home and I loved it here. I’ve grown up a Husker.”

Trying to work his way into the picture became more difficult when the coronavirus pandemic hit.

“COVID has made it hard with mask regulations,” Heins said. “They locked us out in the stadium at times. You only have a certain hours, where it used to be we work out whenever we wanted to. Obviously, as a walk-on you have to work your way up.”

Heins, still classified as a redshirt freshman, will be entering his third season with the Huskers. He has taken mental reps while playing behind All-Big Ten leader Conner Culp. It was beneficial for the redshirt freshman as he continued to improve on his kicking game.

“I’ve learned that consistently, attitude and demeanor are everything in kicking,” Heins said. “Your attitude determines almost all your kicks and who you’re going to come out about that day. Your attitude has to be perfect every time you have to go out, whether it’s practice, warming up before the game. He (Culp) sets that example, especially with being Big Ten kicker of the year. He’s a real good role model. I think he shows a good example of what kickers under him need to be, what our expectations should be.”

Heins is looking forward to competing in the Red-White Spring Game at 1 p.m. Saturday. He especially can’t wait to play in front of the Husker fans, which he prefers.

“I didn’t like having no fans,” Heins said. “It was weird seeing the stadium unfold. It will be nice having fans back in the stadium cheering us on. I think our fans expect something huge from us and I think this year will be a turning year for us. We have high expectations for us and high expectations from our fans. I think I will have a way better year.”

Richter had to tackle some challenges

Richter was a Cornhusker before he decided to walk on. His mother and two older siblings graduated from UNL. His uncle, John Reinhardt, also played for the Huskers in the ’80s.

Richter was a three-year starter at Kearney Catholic. He started at both offensive tackle and defensive end, where he was a two-time all-state player. Paul Brungardt, Kearney Catholic’s assistant coach and Nebraska alum who played with Richter’s uncle, factored into Richter walking on at Nebraska.

When he enrolled, he reunited with former high school teammate, Matt Masker.

Masker laid down the ground rules and the expectations for Richter. He gave him tips about work ethic and preparations.

“The biggest thing is running through the list and everything,” Richter said. “Obviously put your head down and just work I guess. The biggest factor is to keep working no matter what. It’s going to be tough. Just keep working and it will be all worth it.”

When Heinrich Haarberg joined as an early enrollee, Richter passed the same knowledge that Masker gave to him when he was a freshman.

“He’s adapted to the whole college scene, and I got used to it,” Richter said about Masker. “Obviously, it is great to have the Kearney guys down here.”

Nebraska listed Richter as an outside linebacker. It did not start well for him at first because of COVID-19. He said Zoom meetings are not the same as practicing. The cancellation of last year’s spring game also affected Richter and his progression as he learned a new position.

“It’s been a rough couple of years,” he said. “People have been pretty down on us, but I think all of us have a pretty good culture here, and everyone is excited to get back to playing football. It was a tough season for us because of COVID, but I think getting back to a role of just being ourselves because we have a lot of good talent right now. Being able to use all that is a factor.”

As Heins has Culp to lean on as the team leader, Richter has Damian Jackson. Jackson walked on at Nebraska after serving as a member of the Navy SEALs for four years. He was placed on scholarship last year and played in the last six games on special teams.

“He will tell you how it is at times, but I mean that is the best thing for you to hear, and that’s what makes you the best person that you are,” Richter said. ”Everybody’s got to do what they are supposed to be told. The biggest thing everyone respects him for is he is always doing what he is told. He’s the most accountable person I ever met to be honest. “

Masker the Mentor: Masker takes Haarberg under his wing just like at Kearney Catholic

Mazt Masker is still a competitor. He wants to continue to climb the depth chart with spring football kicking off on May 1.

Kearney High graduate Gabe Heins (93) kicks during spring practice earlier this month. Heins is in his third year with the Huskers but he’s still considered a redshirt freshman as he bids for playing time this fall.

Nebraska's Eli Richter waits his turn during spring practice at the Hawks Championship Center on Wednesday.