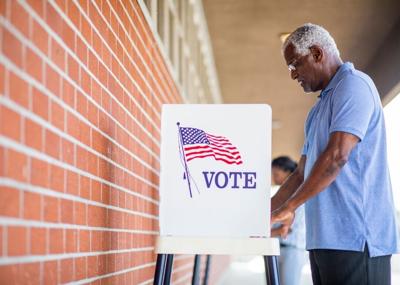 Through a phenomenon called “linked fate,” small or marginalized groups tend to vote more as a block -- assuming they may not have a loud enough voice in the political system if they don't band together at the polls.

But exhaustion from a series of broken promises is breaking up these long-held strongholds.

Most familiar is the distinction between conservative Cubans who fled the Castro regime versus more liberal Mexicans, many of whom have undocumented family members. But last year, voters with Mexican roots flipped famously Democratic Miami-Dade County for Republican Gov. Ron DeSantis.

What’s going on here, and is it a harbinger of things to come?

To quote economist Glenn Loury, social science is harder than physics. But specifics about Black and Latino culture can show why tensions with an increasingly left-wing Democratic Party are rising.

First, it shouldn’t be assumed that Black and Latino voters are unconcerned with border security. Legal immigrants can be surprisingly frustrated with leniency for those who didn’t have to endure the same exhausting process they did. And to the extent that these minority groups are overrepresented among the working class, new immigrants are often painted as challengers for jobs or wages.

This is largely untrue, unless we’re referring to the tiny percentage of the population without a high school diploma. Most people aren’t aware of how much immigration boosts the American economy.

But even if they favor more open borders, it’s fairly obvious that we could secure the border while making the immigration process easier and come to a reasonable compromise. So many conclude that the immigration issue is such a great political football that nobody in Congress wants to solve it, including the Democrats.

Second, many Black and Latino voters belong to churches that are conservative about sexuality and gender. While acceptance of gay marriage shot up after the Supreme Court’s Obergefell decision, the cultural push for adolescent transgenderism and polyamory is a bridge too far for many of these religious folks.

This only adds fuel to the fire for complaints by Latinos and Black people about inadequate schools and unacceptable crime rates in their neighborhoods. Minority parents tend to support school choice, despite stern Democratic opposition. While Black Americans polled in 2020 agreed that they’d like to be treated better by the police, 80% said they wanted either the same or more police in their neighborhoods.

Education and crime are practical, day-to-day matters that deeply affect us. I met a Black lobbyist who had returned from stumping for left-leaning policies in Washington, D.C. On returning to his Chicago neighborhood, he thought, “What difference did our policies make? Is anything any better?”

While the Democrats used to be associated with the worker, they are now associated with college-educated elites, and the further left one goes, the richer and whiter one gets.

Minority Democratic voters are the most centrist of their party. While Republicans were once the party of establishment business types, they now seem to care about the ignored and disdained American worker — of whatever color. Black incomes increased so much between 2017 and 2019 that the Black poverty rate dropped below 20% for the first time in American history, according to "The Black Boom," by Jason L. Riley.

Furthermore, Black and Latino Americans are among our most entrepreneurial citizens. Many of them dislike the layers of regulation that favor entrenched fat cats while blocking small start-ups. They think COVID restrictions went too far.

There’s only one way the Republicans can screw this up, and they very well may. Republicans have become notorious for their willingness to blame struggling communities for their failures. The tone of condemnation doesn’t encourage or attract. A new wave of Black and Latino Republicans, such as U.S. Sen. Tim Scott, R-S.C., must do justice to the historic struggle of minority communities while favoring conservative policies. Negativity, such as that of conservative political commentator Candace Owens, is a losing proposition.

Ferguson is the director of the Free Enterprise Center at Concordia University in Chicago: Rachel.Ferguson@cuchicago.edu. She is co-author of “Black Liberation Through the Marketplace: Hope, Heartbreak, and the Promise of America.” She wrote this for InsideSources.com.

"I predict in the near future that the human element will be completely removed. ... The humans will spend their time playing croquet in the b…

What can we do to live a happier life? | The Ethical Life podcast

🎧 The hosts discuss a recent study about happiness and whether the philosophy of the stoics can help us in our everyday lives.

Richard Kyte: Key to happiness is learning to accept things as they are

Commentary: Once we stop looking at what happens to us as an affirmation or rejection of our egos and instead learn to see it as a test of cha…

"We have no choice but to make hard decisions," Oklahoma Rep. Kevin Hern recently said. He leads the Republican Study Committee, a group of mo…

Congress needs to make it clear that payments — including to Social Security recipients — will be made.