Gov. Ricketts: Decision to reopen schools must rest with policymakers
Share this
{{featured_button_text}}
1 of 2 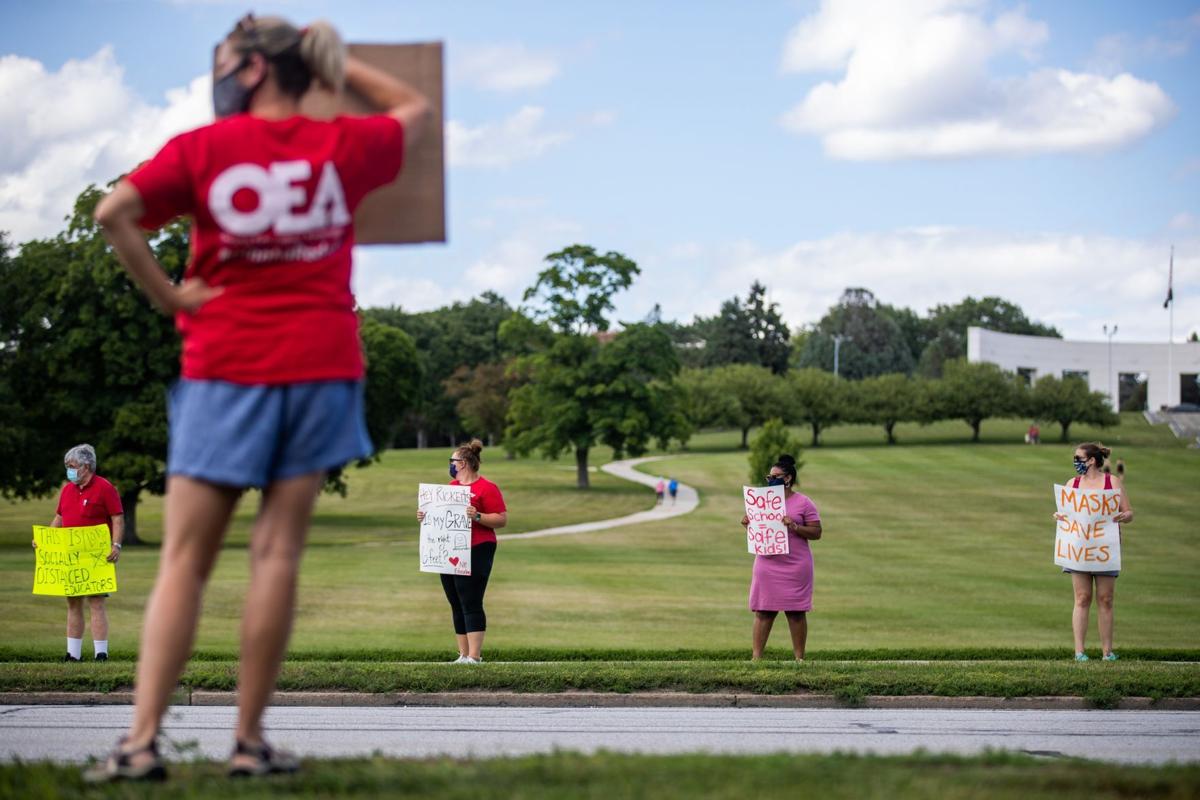 More than a hundred people attend a demonstration by Omaha-metro educators demanding a mask mandate before returning to classrooms at Memorial Park in Omaha front yard on Monday, August 3, 2020. 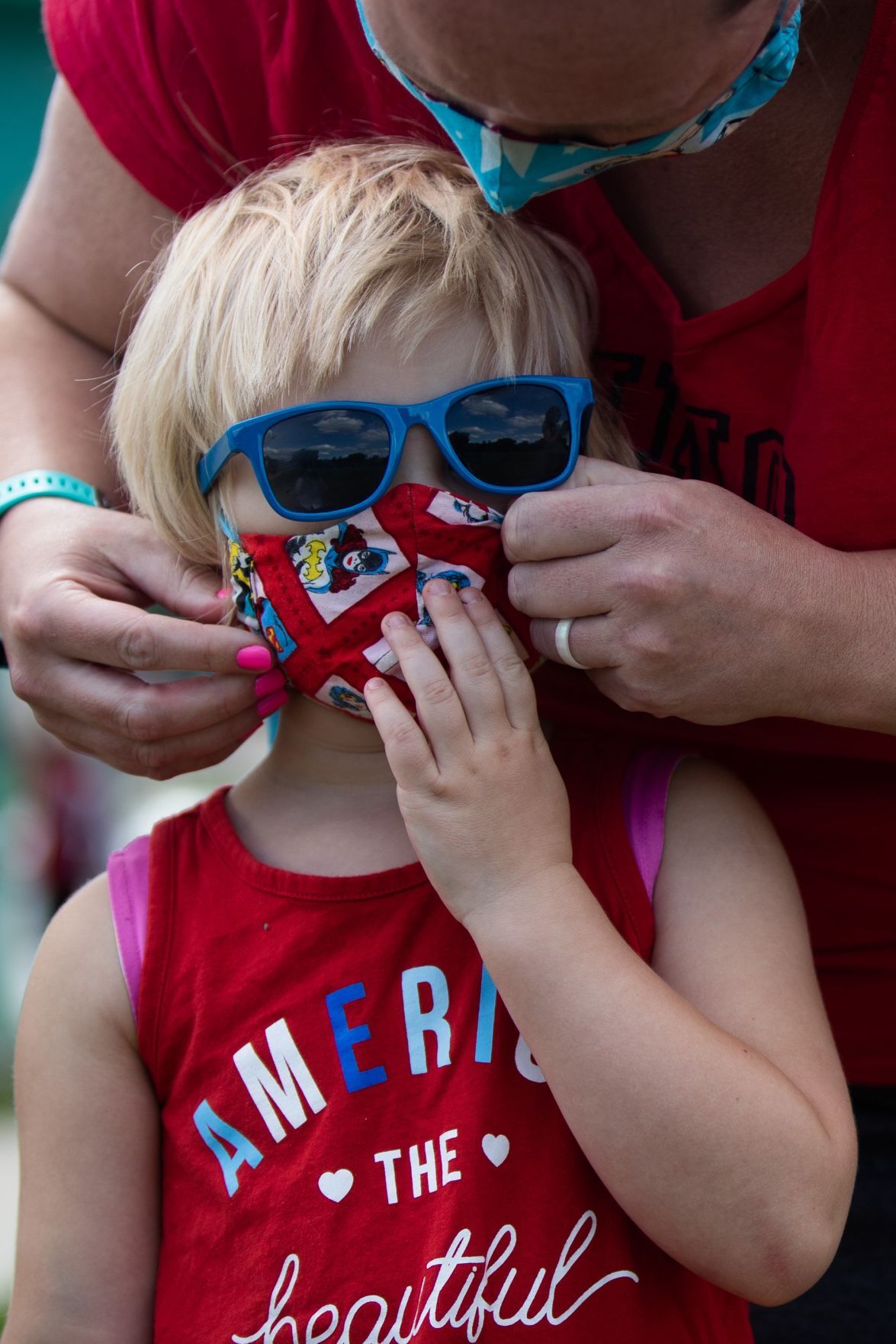 Colleen Durant, an Omaha area teacher, adjusts the mask of her daughter, Cecilia, 4, during a Monday demonstration at Memorial Park by Omaha area educators demanding a mask mandate before returning to classrooms.

LINCOLN — Nebraska Gov. Pete Ricketts said Monday that policymakers, rather than health experts, should decide whether schools should reopen to students.

Policymakers should take advice from different sources, including health experts, but have to base their decisions on the “big picture.”

At a press conference Monday, Ricketts was asked about the recommendation of health officials at the University of Nebraska Medical Center College of Public Health that schools should consider staying closed when the number of COVID-19 cases in the community exceeds 50 per million population per day.

The university derived that threshold by analyzing 15 countries that reopened schools.

Douglas County’s rate is 233 per million based on a 14-day rolling average, according to one expert.

“Policymakers need to make these decisions,” Ricketts said, “because when doctors say that, they’re only looking at a very, very narrow part” of the situation.

“When we as policymakers look at this, we have to look at the big picture.”

Many Nebraska schools are scheduled to reopen next week. Although the details of their reopening plans differ, with some dividing students into groups attending on different days or offering fully remote options, most initially call for students to come back in person to schools.

Related: Weighing health risks, some 'heartbroken' teachers retire instead of returning to class

Even as Ricketts expressed confidence about a return to school, some discontent over reopening plans continued with a protest Monday outside the governor’s residence.

About 100 red-clad protesters gathered outside of the governor’s residence to call for safe reopening of schools.

Maggie Thompson, a leader of the Lincoln-focused group, said the number of cases in Lincoln is too high for safe in-person learning. She said the Lincoln Public Schools should delay the start of school or improve remote learning offerings.

During the press conference, Ricketts quoted statistics to support reopening.

Ricketts pointed to Centers for Disease Control and Prevention statistics that the nation’s death rate from COVID-19 among school-age children is approximately one in a million since the pandemic struck the United States, lower than for influenza.

The governor quoted CDC Director Robert Redfield, who said last week that death rates among schoolchildren from influenza are five to 10 times higher.

Redfield expressed concern that the prolonged school closure has caused a surge in high school suicide rates — more deaths than from COVID-19 — and in drug abuse.

Ricketts said policymakers have to think broadly about all the reasons kids should return to school.

He said it’s not just about academics but about students’ socialization, their need to be with other kids, physical and behavioral health and nutrition.

He said reopening schools is about managing the virus “for the long haul.”

There may never be a vaccine, and schools can’t be closed down permanently, so everyone has to learn how to manage it, he said.

Dr. David Brett-Major, a professor of epidemiology in the UNMC College of Public Health, said Monday that he agrees it’s important to address all the things that happen in school, including meeting students’ physical and emotional needs. But there may be other ways to do that outside of a traditional school setting, he said.

“I do not envy the governor in decision-making. It is a hot mess of a decision,” Brett-Major said. “It’s not about whether to have schools or not. It is, ‘We have these interests, how are we going to meet them and not worry about whether we have the schools open.’ ”

Brett-Major said children do become infected with the virus, and some suffer severe disease. They also play a role in transmission.

Ricketts and Blomstedt said that they expect to see COVID-19 cases in schools and that school districts and health departments have plans for dealing with them.

Each situation will be addressed as it comes up, Blomstedt said. He said the state is asking school districts to be thoughtful in assessing risks. He said reopening schools is much harder than shutting them down.

“I’m concerned that if schools have a few cases and shut down, and don’t think about all the ways to mitigate that, then we’ll have a very hard time being able to be in school,” he said.

He said state officials had been hopeful that the disease spread trend lines would have been better for the schools reopening. But he said the state will move forward with reopening schools. He said, though, that officials will have to be willing to change course if necessary.

The governor said the state has already seen how social distancing can be effective. He said a girls basketball team was doing conditioning, and one of the girls contracted COVID-19, but because the team had been practicing social distancing, the other girls did not have to quarantine.

He said the state has been working to create a “robust” contact tracing and testing program to respond when cases turn up in the schools.

Ricketts said that applying the threshold of 50 cases per million would be impractical.

He said, for example, that if that threshold were applied to the Papillion-La Vista Community Schools, then two cases could shut down that district’s schools.

The thresholds cited by health experts work on large populations but not necessarily on smaller ones, he said.

Ricketts said schools are “absolutely” ready to open next week.

He and Blomstedt praised local school and health officials for developing reopening plans.

Ricketts said the state’s goal remains to keep the health care system from being overwhelmed. He said that as of Monday, 40% of hospital beds and 83% of ventilators were available.

As of Monday, the Douglas County Health Department put Douglas County at the orange risk level for the disease, indicating a high risk of COVID-19 spread.

Reopening plans vary in detail from district to district, but all are aiming to open with kids learning in person. However should disease spread become severe, they all have an option to close school buildings and teach students remotely.

The governor would also have the option of issuing a directed health measure, as he did in the spring, should he decide that state intervention is necessary.

The governor urged parents to be patient as schools open. He said everyone, including teachers, will be going through this for the first time.

“There are going to be lessons learned as we go through this. We’ll do things better as time goes on.”

How Omaha Public Schools will handle bus safety amid coronavirus

"This is a teacher alliance," the teachers chanted. "Our governor doesn't listen to science."

An All-Big Eight offensive lineman in 1987, Keven Lightner has been hospitalized in Lincoln since July 28.

“The No. 1 thing we can do to protect our children is to decrease transmission in our communities," said the dean of UNMC’s College of Public Health.

Weighing health risks, some 'heartbroken' teachers retire instead of returning to class

“I just couldn’t see a scenario where I could be physically safe,” one teacher says.

According to KPS superintendent Kent Edwards, the school district’s risk dial and the health department’s will not necessarily be the same.

We Care. We Wear: Face masks are key component of UNK’s fall plan

KEARNEY – Face masks and social distancing are part of the University of Nebraska at Kearney’s plan to safely return to in-person, on-campus i…

More than a hundred people attend a demonstration by Omaha-metro educators demanding a mask mandate before returning to classrooms at Memorial Park in Omaha front yard on Monday, August 3, 2020.

Colleen Durant, an Omaha area teacher, adjusts the mask of her daughter, Cecilia, 4, during a Monday demonstration at Memorial Park by Omaha area educators demanding a mask mandate before returning to classrooms. 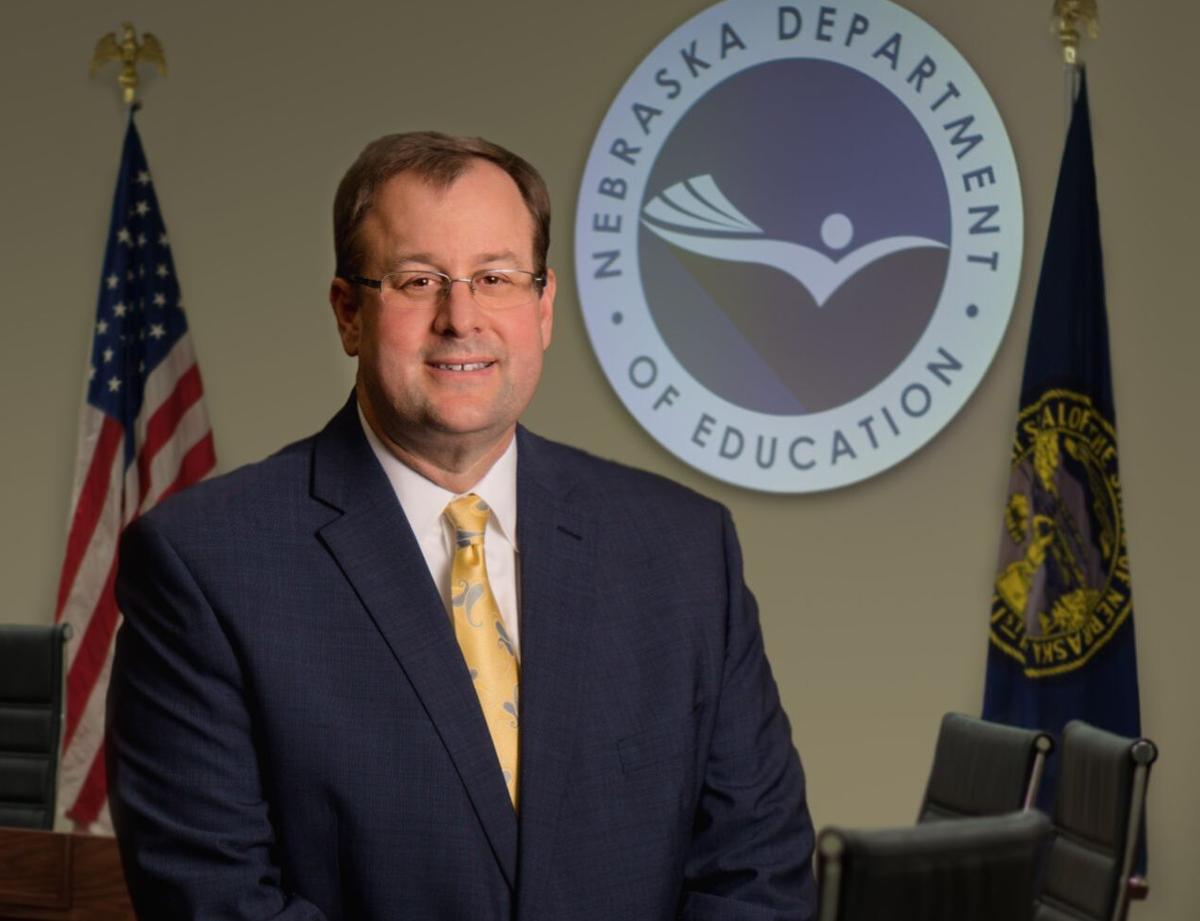 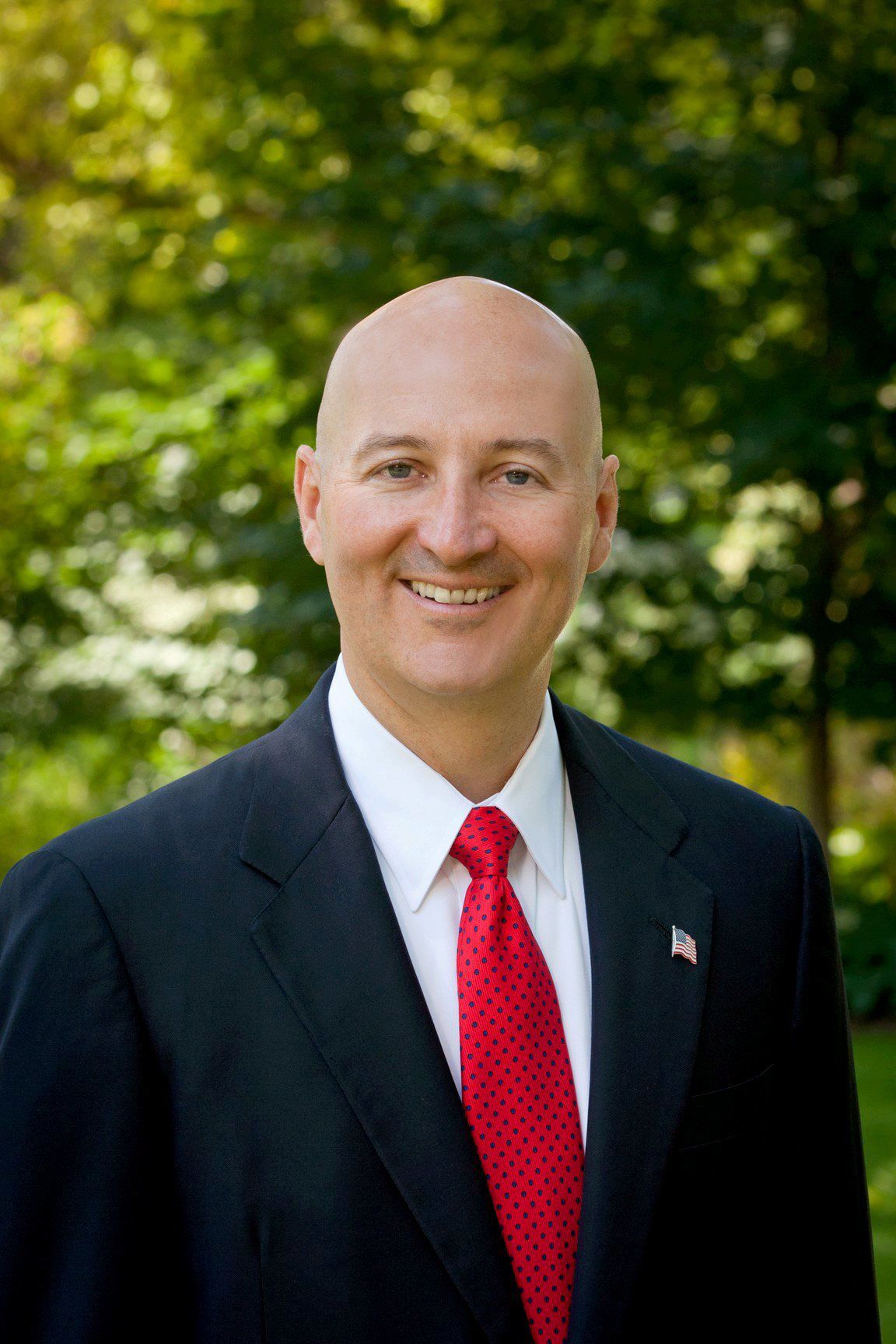