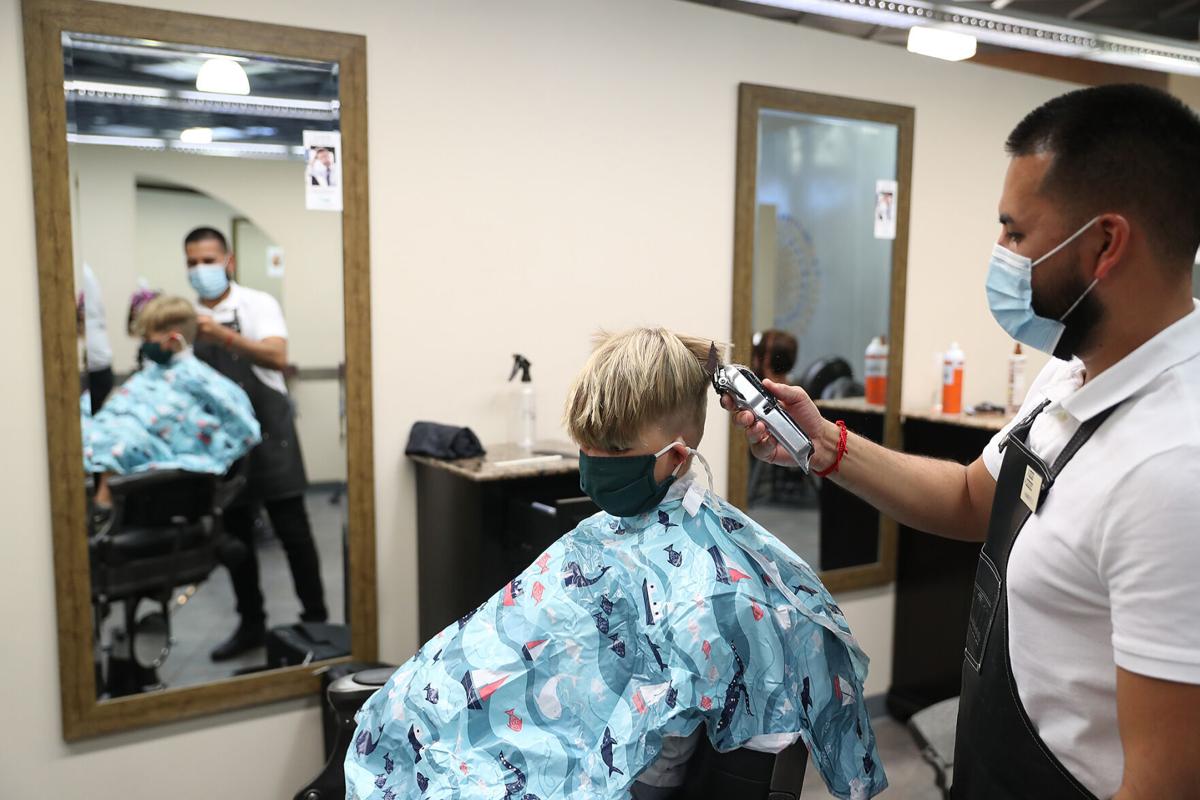 Levi Schlegel, 4, of Grand Island, gets a haircut from barber Humberto Cevantes, a student at Xenon Academy in Grand Island. The haircut was the second one Schlegel has received from the school. Cervantes will graduate in September. 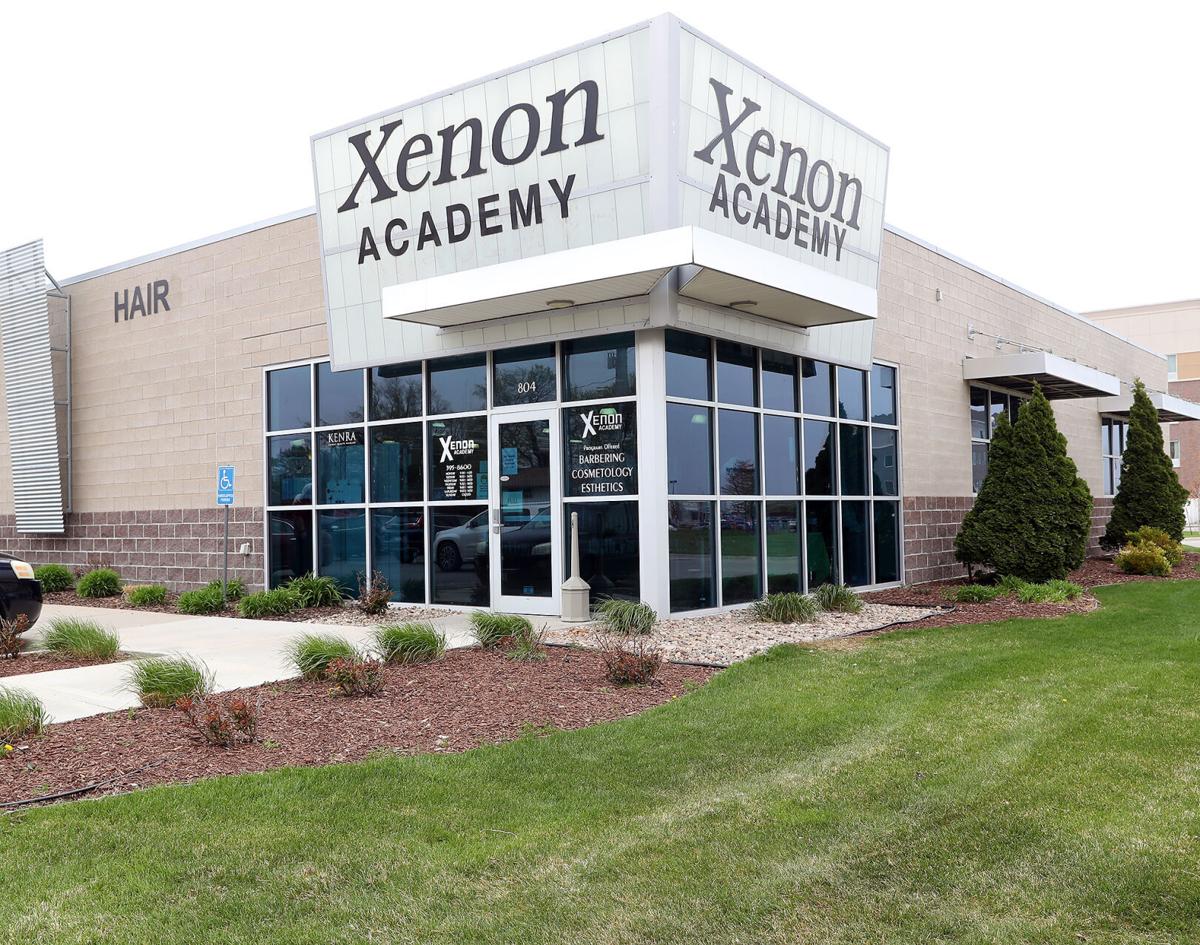 A shave and a haircut may not be two bits, but the tonsorial arts are alive and well at Grand Island’s Xenon Academy, 804 N. Webb Road.

For the past year, the Xenon Academy has been training a new generation of barbers. According to Jackie Hornig, Xenon’s senior executive director, barbershops are making a comeback as men seek the old-school qualities of a good shave, haircut and much more from modern tonsorial artists.

The Xenon Academy has been in Grand Island for 15 years. Its curriculum has focused on cosmetology and aesthetics. But last year, it began a course in barbering as demand for practitioners in that art began to grow.

Hornig said they started the “Groom Room” where the public can come in and get a wide array of services from Xenon’s barbers in training, including a shampoo and a haircut, kids cut, neck trim, beard trim, mustache trim, a shave with a hot towel, facial, manicure, a little gray camouflage and much more.

And with the first batch of professional barbers recently graduated, it may not be long until barbershops become the thing again.

“You are seeing all kinds of variations of barbershops,” Hornig said. “Here in the Midwest we want to keep those core barbershop values.”

And those core values are the tried and tested features that have drawn men to their local barber with the striped pole for years — a professional haircut and shave that make the customer both look and feel good.

“While keeping up with the latest trends is important,” Hornig said, “we also want to be able to service that 7-year-old boy to that 77-year-old man.”

She said it is all about making the customer feel comfortable and confident that they are getting off the barber chair with the best haircut ever.

“You aren’t going to see flashy lights and neon; we want the core education to be good barber techniques,” Hornig said.

Hornig said that can be witnessed with all the men’s grooming products that are advertised.

According to industry officials, the global men’s personal care market is expected to grow at a compound annual growth of 6% from 2020 to 2027 to reach $75.7 billion by 2027.

She said men are also looking for the atmosphere — a place for social bonding for which barbershops have been famous.

“Men’s barbershops are evolving,” Hornig said. “We are adapting our curriculum to reflect the many different trends we are seeing in men’s barbershops.”

Along with cutting hair, those trends include facials for men, nail care, hair coloring and highlighting and much more.

“We want the guys to be comfortable,” Hornig said.

She said Xenon recently graduated its first class of barbers. The academy also recently hosted a statewide barber board examine.

“With the regrowth of barber shops, we are going to keep turning out graduates,” Hornig said. “We are having barbers calling us looking for help, along with new and fresh ideas.”

According to the industry officials, barbershops are some of the most successful startups in the country and are profitable.

Barbering has a long and interesting history. The first known barbering services were performed by Egyptians in 5000 B.C. with instruments made of oyster shells and sharpened flints.

Over the ages, barbers doubled as religious priests as well as performing medical surgeries, such as pulling teeth and setting bones. They also performed “bloodletting” where they would bleed out the illness in a person’s body. The famous barber pole came about as a way for barbers to advertise their bloodletting services as putting bowls of blood in the shop window was frowned upon.

According to the Avenue Five Institute, the red of the barber pole signified bloodletting, white the medical bandages, and blue was said to stand for non-oxgenated blood. The downward spiral of the pole signified the aortic flow of blood in the body.

According to Hornig, in Nebraska, only barbershops are allowed to use a barber pole as a form of advertising.

She said about three-quarters of Xenon’s barbering students are men. Most of the people who Xenon trains to be barbers eventually want to start their own shop.

And for the barbering student, it is just not learning to cut hair, but how to do nails, apply color and highlight hair, facial skincare and much more, Hornig said.

“What is wonderful in Nebraska is that they learn all of these skills,” she said. “The only difference between a barber and a cosmetologist is the ability to shave.”

For more information, visit Xenon’s website at www.xenonacademy.net. Its phone number is 308-395-8600.

Psaki on gasoline shortage: 'The end is in sight'

Psaki on gasoline shortage: 'The end is in sight'

The May 15 episode of “Accident, Murder or Suicide” will rehash the case just one week before the 22nd anniversary of Sandy Schnabel’s death.

The state of Nebraska will get $111 million, with $46 million to the city of Lincoln and $62 million to Lancaster County.

A fire Wednesday resulted in the loss of 10,000 hogs and total destruction of a building owned by the business founded by a current University of Nebraska regent and gubernatorial candidate.

The Nebraska State Patrol said the Fremont man came out of a residence with a firearm and fired at least one shot. Multiple officers fired their weapons in response.

Man to prison for shooting at Grand Island police officer

Tejani Abdalla, who shot at a Grand Island Police officer last July, was sentenced last week in Hall County District Court to 12 to 15 years in jail.

The man began making sexual comments that made the woman uncomfortable, so she started recording the encounter. Using the recorded audio and a description provided by the victim, LPD officers found the suspect.

A Fillmore County man who triggered a social media storm last fall after driving around Lincoln with a racist message on his pickup was sentenced to prison for attempted manufacture of a controlled substance while in possession of a firearm.

Lincoln Sen. Anna Wishart said her bill legalizing medical marijuana was the last time the Legislature would get a say in the issue before a petition drive goes before Nebraska voters in 2022.

She was accused of submitting 1,201 claims totaling $109,274 to Nebraska Medicaid without proper documentation showing that services had been provided.

Levi Schlegel, 4, of Grand Island, gets a haircut from barber Humberto Cevantes, a student at Xenon Academy in Grand Island. The haircut was the second one Schlegel has received from the school. Cervantes will graduate in September.