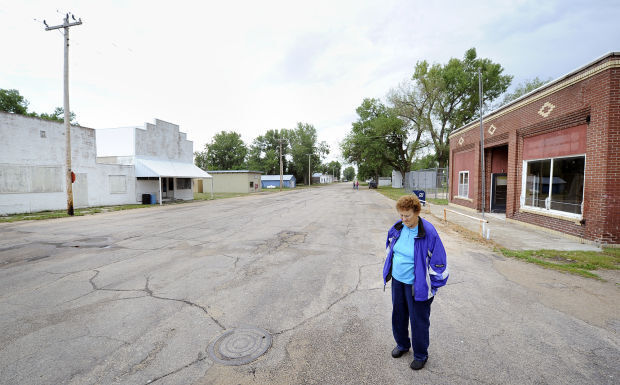 Betty Christensen stands at the corner of Second and Main in Newport, four hours northwest of Lincoln. She was 87 when she started driving an effort to raise $200,000 for a new fire hall, community center and village office. "I guess I’m the pusher," she said. "And the rest of them do the work." 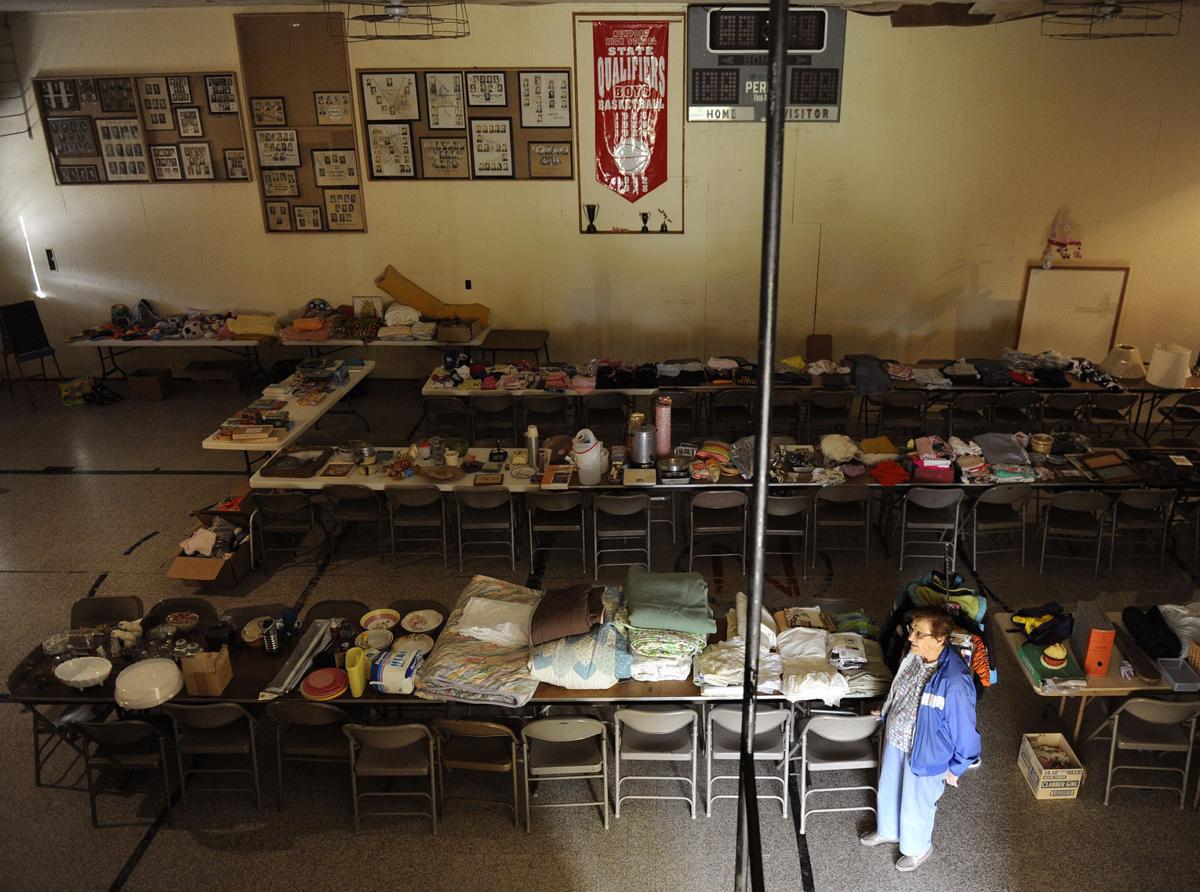 A few days before the rummage sale fundraiser in 2015, Betty Christensen looked over the donated items that fill the Newport gym and community center. The sale raised $742 toward a new building to replace the center and the nearby fire hall. 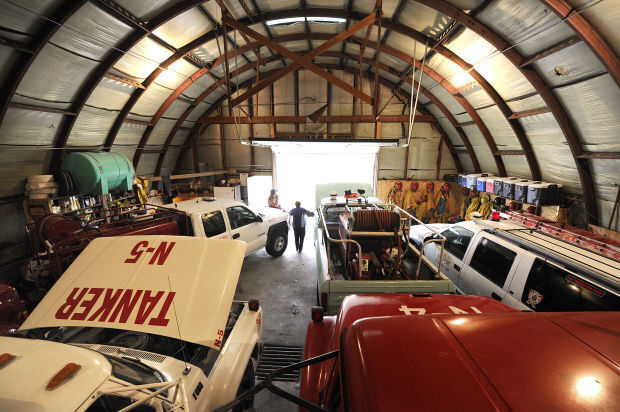 Newport's fire hall and community center, under construction in 2016.

She had watched her Newport flourish and fail. The grocery stores, gone. The churches, gone. The post office, gone. The steakhouse and convenience store at the highway’s edge, gone.

But Betty Christensen wasn’t going to watch her town die. She was in her 80s when she hatched an improbable plan: to raise more than $200,000 to replace the community center and the fire hall.

The buildings were important to Newport. When Christensen’s husband, Elmer, was mayor in the 1950s, he’d helped convert the former granary into a gathering place. Generations of Rock County families attended parties, potlucks and reunions there, to celebrate what they still had, and funeral dinners, to mourn who they lost.

Her husband also helped build the fire hall, a small, second-hand Quonset for the 30 or so volunteers who serve 350 square miles, the eastern third of the county.

But both buildings were beyond repair. The volunteer firefighters struggled to squeeze all of their rigs in through its single door, and to even afford to pay its heating bills, which could soar to $5,000 annually. The community center would flood during heavy rains and become a refuge for snakes.

“I just knew something had to be done and I started asking questions,” Christensen said in 2014. “And everybody was for it.”

She enlisted volunteers, and they envisioned a modern, 6,000-square-foot steel building, with enough room for the fire department, the community center and village office.

They didn’t want to burden their 70 or so neighbors, so they pledged to avoid public money. No bond issues, no levy increases, no tax dollars. Instead, they sold cakes, cookies and candies, hosted rummage sales, suppers and dances, raffled quilts, pigs and, one year, a rifle.

They also asked for donations, with Christensen quietly contributing the first $10,000.

And in 2017, Christensen toured the nearly finished building. It had ample room for the firefighters and their equipment, a modern kitchen and gathering place for the community, a roof that held. The cost was higher than expected -- $260,000, which they covered with no public money -- and construction took longer than they wanted, but here it was.

Christensen died Monday at the Rock County Hospital in Bassett, her daughter, Lonna Allison said. She was 94.

When the building was finished, some people in Newport suggested it should bear her name. But her mother wouldn’t have wanted that, Allison said.

“She was a pretty humble person. That would have been a little strange for her.”

The building occupied her later years, but Christensen’s legacy was so much bigger than that, her daughter said. She helped on their farm, at her children’s school, in the community.

“She was the girl who pitched in,” Allison said. “She was just always there.”

She’ll be buried Monday. And then her friends and family will gather for coffee and cookies in the community center Christensen helped build.

What's with these 12 Nebraska towns?

Callaway, population 531 as of the 2013 census, is 65 miles northwest of Kearney on Nebraska 40. The town is known for a Kite Flight event each Labor Day weekend and for an annual Pioneer Picnic.

The town was settled after the Civil War and named after S.R. Callaway, second vice president and general manager of the Union Pacific Railroad when the Wood River grade was made from Kearney to the Callaway town site.

This town, which incorporated in 1907, wasn't named for Thomas Edison. "Edison, in the eastern part of Furnas County, was named for the son of R.H. Rohr, one of the owners of the first store," according to a write-up on the University of Nebraska-Lincoln Virtual Nebraska website.

The frontier town early on had an opera house, two hotels, a blacksmith, hardware story and three churches. Its population is 131, according to the 2013 census.

Farwell, population 122, is located on Nebraska 92 a few miles off U.S. 281. The town has its roots in the village of Posen, which flooded one too many times. In 1893, fed-up residents moved all the buildings to a new site overlooking the Loup River Valley. The town Farwell's name means "goodbye" in Danish, as in "goodbye" to Posen.

Farwell is only 15 miles from Sherman Reservoir State Recreation Area. It is also home to St. Anthony's Catholic Church, the oldest Polish Catholic church in Nebraska.

The town of Palisade has been located at two sites, according to a history on UNL's Virtual Nebraska website. The town in the Frenchman River Valley began in 1879, but when the railroad missed the site by half a mile all but one of the buildings of the town were moved to put the town next to the rail line.

The town, with a population of 348 as of the 2013 census, is known for Palisade Pioneer Days each June. Attractions include the veterans memorial and POW camp, where German prisoners were held in the early 1940s.

According to ghosttowns.com, Antioch was a mining town established during World War I to mine potash. Nebraska potash was used in the manufacture of fertilizer, Epsom salts, soda and other products.

The town, located in Sheridan County east of Alliance, once had 2,000 people, but in the late 1930s the demand for potash fell as foreign imports resumed. Today there are fewer than 25 people. Many of the original buildings remain in the town.

The Sandhills village of Taylor is the only city in Loup County and hosts the county fair. It was surveyed and platted to 1883.

Taylor is a recreation center, with the Calamus Reservoir and State Recreation Area nearby. The town boasts a veterans memorial, a junior rodeo and an aboretum. The town had a 174 population as of the 2013 census.

The Beemer Play Days happen annually in July, and the town has a yuletide social in mid-December. The Indian Trails Country Club with a golf course is located just south of town on the bluffs of the Elkhorn River.

Leigh is the site of the Colfax County Fair. The town also is known for a big car show and street dance, usually in August. The Maple Creek Recreation Area is located northwest of Leigh on Nebraska 91.

The town's history dates to 1873, when Stephen Miller hauled lumber from Schuyler for a one-room house at the present site of Leigh. By 1880, Leigh had a blacksmith shop, 10 dwellings and a population of 54. Yankee Road, south of town, was the dividing line -- homesteaders of English ancestory settled on the east, those of German descent to the west, and Czech and Irish immigrants filed claims to the north and south, according to a history on the city's website.

Nenzel, in Cherry County, had a population of 20 as of the 2013 census. The village is 30 miles west of Valentine.

The town was established by George Nenzel in 1885. He built the first frame building -- used as a store, post office, hotel and his family's living quarters.

The village features the Nenzel Range Garden, a walk-through setting of plantings native to the Sandhills. The town is 18 miles north of McKelvie National Forest.

Wynot, population 168 as of 2013, has the Brooky Bottom recreation area and Wiseman Monument on the Missouri River east of town. The town is on the Shannon Trail, which relives the Lewis and Clark adventure in northeast Nebraska, and has the Private Shannon wood-carved statue.

Gavins Point Dam is 25 miles northwest of the town, which is located on Scenic Byway 12 in Cedar County.

Shubert, population 147 in 2013, is in Richardson County in far southeastern Nebraska. The town is named after Henry W. Shubert, who purchased land on the prairie next to the Missouri River, according to UNL's Virtual Nebraska website; it was platted in 1883.

The area once was known for its fruit-growing potential, but today it is known more for its proximity to Indian Cave State Park.

Marsland is a ghost town in the Panhandle's Dawes County along Nebraska 2 and 71. It was named after Thomas Marsland, a general freight agent of the CB&Q Railroad, with the first buildings constructed in the 1880s, according to a Virtual Nebraska history.

In its heyday Marsland had 800 residents and was known for agriculture and an ice-harvesting business along the Niobrara. A series of fires in the early 1900s ravaged the town, as well as drought. Today, few buildings remain, and only nine people were residing in the town at last count.

Lemurs have a 'gourd time' at Oregon Zoo

Betty Christensen stands at the corner of Second and Main in Newport, four hours northwest of Lincoln. She was 87 when she started driving an effort to raise $200,000 for a new fire hall, community center and village office. "I guess I’m the pusher," she said. "And the rest of them do the work."

A few days before the rummage sale fundraiser in 2015, Betty Christensen looked over the donated items that fill the Newport gym and community center. The sale raised $742 toward a new building to replace the center and the nearby fire hall. 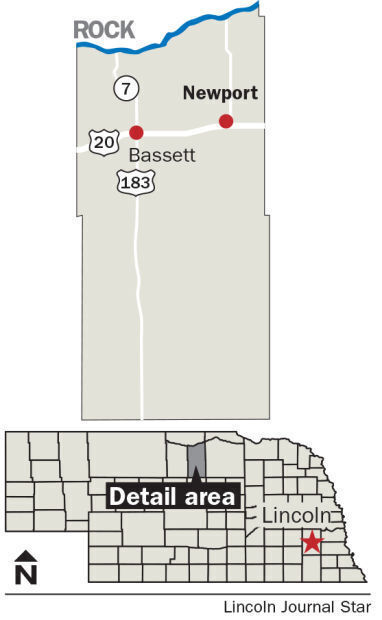 Newport's fire hall and community center, under construction in 2016.