OMAHA -- When Kurt Bruning stands in his field of dryland corn, nothing blocks his view.

That's not the way it should be. The corn should stand higher than the cap and sunglasses perched on his head.

But this year, as harvest approaches, he has a wide view of stunted, yellowing corn.

Exceptional drought has reached his farm in northeast Nebraska, making it and southwest Nebraska some of the hardest-hit ground in the country in terms of drought.

"It can't get any worse," he said, referring to the area's drought classification on the U.S. Drought Monitor, a highly regarded map that is published weekly by the National Drought Mitigation Center at the University of Nebraska-Lincoln.

Drought, which has fried crops and pastures and fueled wildfires, is part of a rough year for Nebraska agriculture.

While not everyone has suffered equally, weather-related disasters across the state have proven challenging for farmers and ranchers.

Spring wildfires. A June frost/freeze. Successive hailstorms. Hurricane-strength winds. Unrelenting heat. Weeks and weeks with virtually no rain. All have conspired to set back or decimate crops. Storms have caused extensive damage to irrigation equipment.

"There is always some of that across Nebraska  — it just seems like this year has been more widespread," said Steve Wellman, director of the Nebraska Department of Agriculture. "In some areas, the drought conditions are as bad as people can remember."

Southeast Nebraska farmer Vern Jantzen says this year shows how climate change is injecting greater uncertainty into farming, a life famously known for a roll of the dice each spring.

"It's impacting the weather, and when the weather changes, we have to figure out what to do," he said. "It's getting harder and harder each year because of the unpredictability."

To be sure, global warming doesn't cause a late freeze, drought or hail. But it amps up the energy in the planet's climate, translating into harsher, more extreme weather.

"If we're going to address the changes in the weather that we are seeing, we need to have these conversations and get things in place," Jantzen said. "I don't think the things are going to settle down."

Federal aid programs need to be proactive and in place, rather than reactive and involving a multi-year application/reimbursement process, they said.

In terms of state action, Wellman said Nebraska is looking to the future by pursuing projects that will shore up the state's water supplies, including the Perkins County Canal and Reservoir System along the South Platte River and other proposed projects.

"We can't make it rain, but we are building up our water-holding capacity," he said.

This year has been a textbook example of the importance of crop insurance, according to Cory Walters, an associate professor of agricultural economics at UNL.

"Farmers did get hit multiple times this year, and it really takes some well-thought-out decision-making to work through this — the freeze, the hailstorms, the winds, the lack of moisture. It's a tough game, and we shouldn't underestimate the role of crop insurance," Walters said.

Those who purchased enough crop insurance this spring should come out with net positive farm income, he said. That's because of the insurance payouts and the fact that crop prices are high and rising.

Walters said it's possible that some farmers were lulled into buying too little crop insurance because Nebraska has gone 10 years without a severe drought, and last year was generally a good year.

This week, all of Nebraska is in drought or near drought, according to the Drought Monitor.

Going back further, for the 12 months ending in August, Nebraska has been near-record dry and warm, sixth and ninth, respectively, out of 127 years. That's according to the National Center for Environmental Information.

In terms of the summer, this has been Nebraska's fourth-driest June-August and North America's second warmest, according to the center.

If that happens, drought could intensify, water levels could drop and fire risks could rise, Dutcher said.

Bruning said he expects his dryland fields to provide about a third of their normal yield and his irrigated fields to produce an adequate but reduced yield. Even irrigation, he points out, has been unable to help plants fully overcome heat stress.

He credits improved farming practices and seed genetics with the yields he'll get.

"Weather like this 50 years ago, we'd have nothing to harvest," he said.

Statewide, about 40% of corn is rated good to excellent, with soybeans faring slightly better, Dutcher said. Pastures, as has been widely reported, are in abysmal condition, with just 7% in good to excellent condition.

How do droughts compare?

With about 88% of the state in drought and the rest nearly so, how does 2022 compare to droughts of the past couple of decades?

Al Dutcher, Nebraska's associate state climatologist, says it's most similar — statewide — to some of the droughts of the early 2000s, rather than the extraordinary drought of 2012.

The main reason, he said, is that the intensity of this drought has varied across the state, as it did in the early 2000s. In those droughts, as with this year, extreme to exceptional drought wasn't widespread.

This year, about 30% of the state — northeast and southwest Nebraska — is considered in extreme to exceptional drought. In 2012, virtually the entire state was in such dire straits, and many communities were curtailing water use.

The heat intensity of this drought hasn't been as extreme, statewide, as 2012, he said. While it has been hot across the western third of the state, the number of days reaching triple digits there is about half of 2012, he said.

Still, each farmer's experience is different and some will say this year is matching 2012 in their fields.

Those areas of Nebraska in best shape should see their soil moisture content restored with normal precipitation between now and spring, he said. Above-normal rain and snow would be needed to restore streams, ponds and lakes.

Hardest hit in Nebraska and elsewhere have been livestock producers because there is not an insurance program similar to crop insurance. The drought is delivering them a double whammy. Lack of rain and poor pastures mean they don't have sufficient grass and hay on their own property to feed their animals. Additionally, feed prices have become unaffordable. As a result, they are having to prematurely sell off stock.

Wellman noted that this summer has seen the fastest pace of cattle being slaughtered on record, with records dating to 1986.

After counting hay bales and purchasing more at double what they have ever had to pay, Bruning said he and his wife reached the difficult decision this month: Sell about half their herd.

"It's a sad situation up here right now," he said.

The mother cows that are being sold should be staying on the farm or ranch, helping to grow the herd.

"It will affect your income years and years down the road because it takes years to build up a herd," Bruning said.

Similar decisions are being made elsewhere, especially in hard-hit southwest Nebraska, where exceptional drought has followed on the heels of an aggressive wildfire season.

Bruning said a saving grace has been that this year is coming after some good ones.

"Every farmer's situation is a little different, but we're all affected by this dryness," he said. "It hurts your yields and it hurts your bottom line ... We'll be trying to recover from this drought for the next three to five years."

Tips for growing a healthy garden during drought

Choosing which plants to water

Check out our best Omaha staff photos & videos of September 2022

Kurt Bruning stands in one of his fields of dryland corn near Meadow Grove on Thursday. Bruning said normally this time of year, the corn would be taller than him, but the drought has taken its toll. 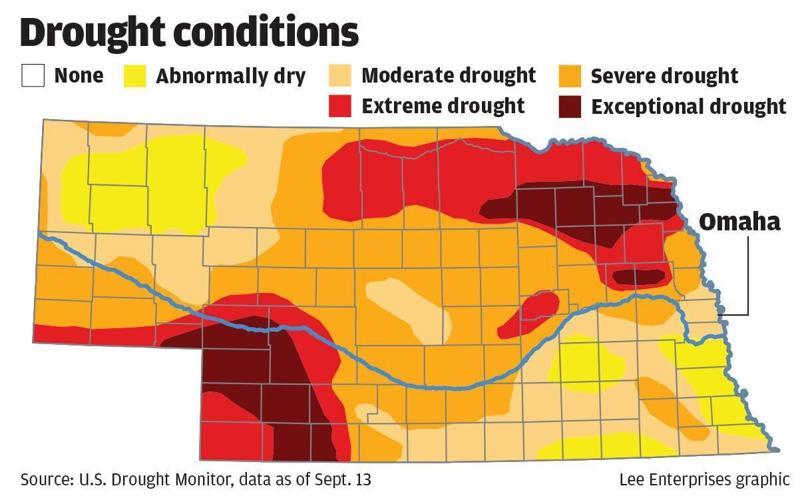 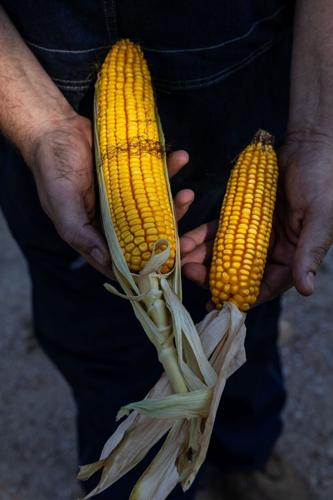 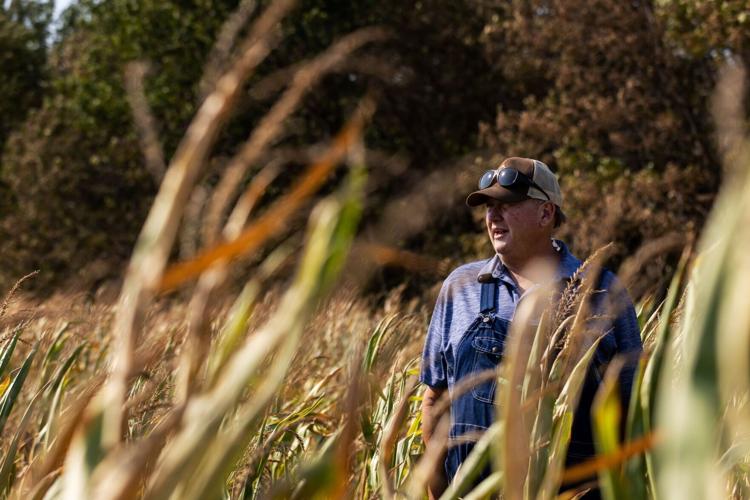 Kurt Bruning stands in one of his fields of dryland corn near Meadow Grove on Thursday. Bruning said normally this time of year, the corn would be taller than him, but the drought has taken its toll. 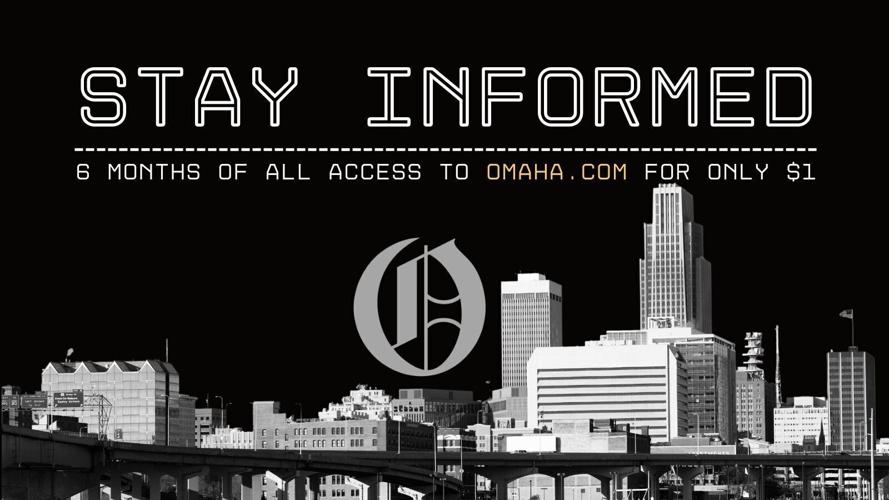