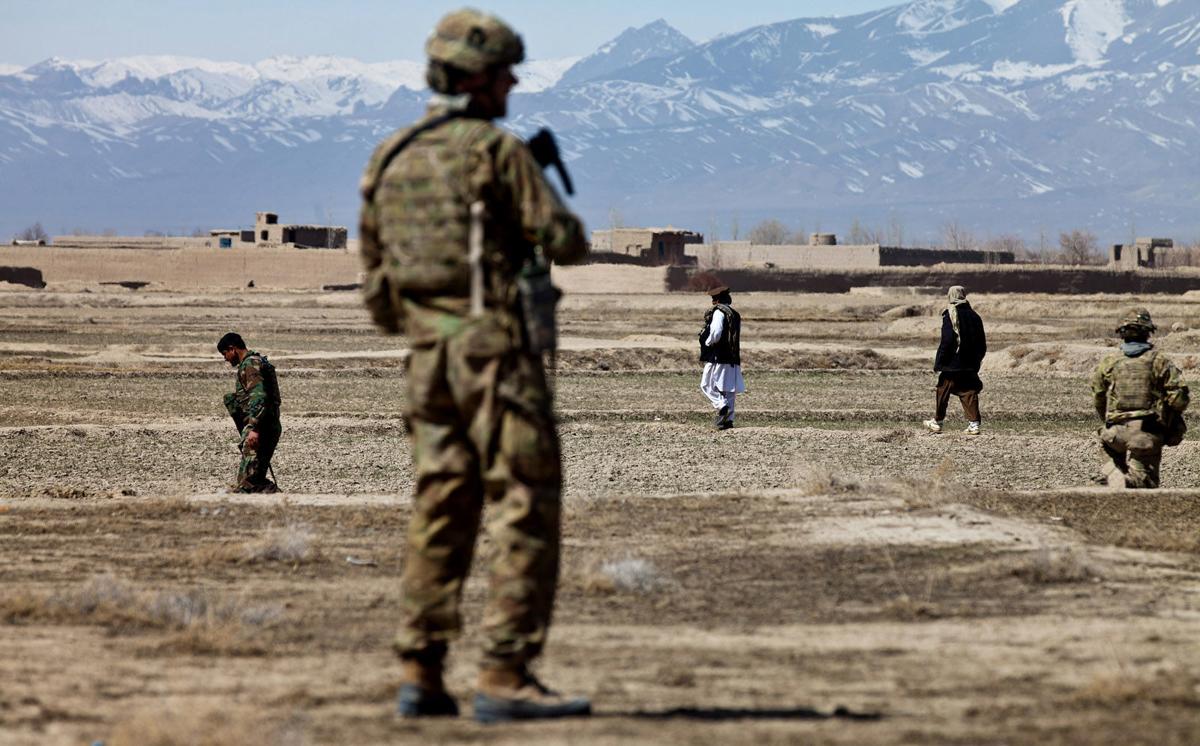 A soldier with the Iowa National Guard's 1st Battalion, 168th Infantry Regiment stands in a security position as the Afghan National Army and others search for hidden weapons in Afghanistan in March 2011. 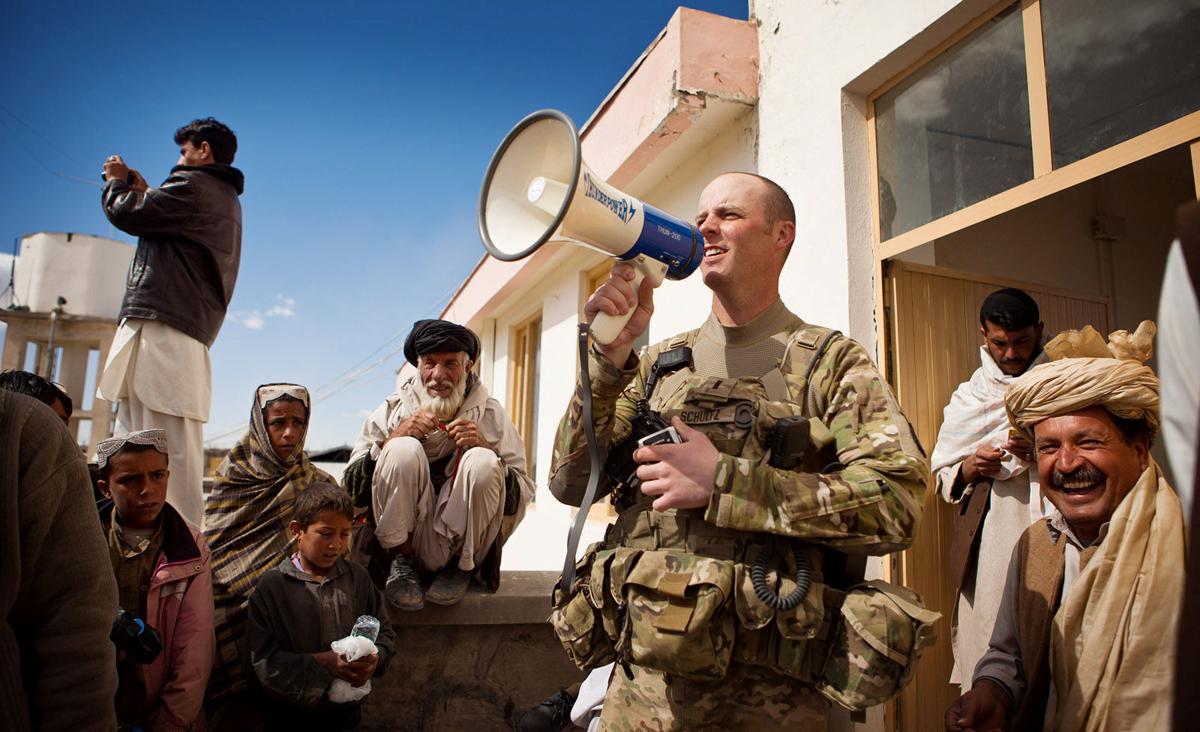 1st Lt. Justin Schultz of Council Bluffs gets laughs as he tries to speak Pashto in Afghanistan in March 2011.

From the moment terrorists flew jetliners into the twin towers of the World Trade Center on Sept. 11, 2001, Jeff and Kathy Claypool knew that their lives were about to get complicated.

Then, and now, the couple from Lincoln served as enlisted airmen who worked full time for the Nebraska Air National Guard’s 155th Air Refueling Wing.

“Being in the military, you knew — the hair on the back of your neck raised up,” said Jeff Claypool, now 55 and a chief master sergeant, of the moment he saw United Airlines Flight 175 hit the second Trade Center tower on television. “I was thinking my wife was going to be deployed with the aircraft.”

Kathy Claypool was an operations sergeant responsible for combat crew communications systems aboard the Wing’s KC-135 refueling tankers. That morning, she was home with the couple’s youngest son, Adam, who was home sick from school.

She quickly arranged a sitter for Adam, donned her battle dress uniform and hurried over to the 155th’s headquarters at Lincoln Airport. She reported to her job, prepping the tankers to fly.

“I knew that I was going to be one of those who would leave soon,” said Kathy Claypool, 52, now a senior master sergeant.

She was right. Within a month, she deployed to Europe in support of the U.S. and NATO campaign to run al-Qaida and its Taliban sponsors out of Afghanistan. It was the first of four post-9/11 overseas combat deployments.

The terrorist attacks forced a change in U.S. military operations that has profoundly affected every service member and unit, speeding up a post-Cold War trend of using Guard and Reserve units much more in real-world and combat situations.

“It was an iconic moment,” said Maj. Gen. Daryl Bohac, the Nebraska National Guard’s adjutant general since 2013. “The homeland was no longer the sanctuary it had always been.”

Call-ups that had been rare before 9/11 became commonplace, starting slowly with the Afghanistan War launched in October 2001 and ramping up quickly after President George W. Bush chose to invade Iraq in 2003.

“What changed was the operations tempo. It increased rapidly,” said Col. Christopher “Kipper” Hesse, a KC-135 pilot at the time who is now director of staff-air for the Nebraska Air National Guard.

During the Cold War, the National Guard was part of what the military calls a “strategic reserve,” called to battle in only the most dire national circumstances.

“Before it was ‘break glass only in emergencies,’” Bohac said.

President Lyndon Johnson made a political decision to keep National Guard call-ups to a minimum during the Vietnam War, said National Guard Maj. Miranda Summers Lowe, the author of a 2019 article called “The Gradual Shift to an Operational Reserve” in the journal Military Review.

“All told, only 3,000 Guard and Reserve soldiers were involuntarily mobilized for Vietnam,” she wrote in the article. “This reinforced the reputation of the reserve component as a place to avoid the draft.”

Military leaders were determined to change that mindset in the wake of Vietnam and developed what came to be called the “total force” concept. That meant using Guard and Reserve forces as what the military called an operational reserve, which meant training and equipping them to deploy to combat zones when necessary, although less frequently than full-time military units.

Wary of overseas conflicts, the U.S. didn’t engage in any large-scale wars requiring the call-up of reserves until Saddam Hussein’s Iraq invaded neighboring Kuwait in August 1990.

Over the next five months, the U.S. mobilized almost 700,000 troops — including 84,000 Guard and Reserve troops — for the first Gulf War, called Operation Desert Storm. In a lightning attack that was over in days, the U.S. and its allies ejected Iraq from Kuwait.

“It gets very messy. The active-duty Army is saying (the Guard and Reserve) are too slow getting mobilized,” Summers Lowe, curator of modern military history at the Smithsonian’s National Museum of American History, said in an interview. “But the dominant narrative is that the Gulf War is kind of the proof of the total force concept.”

During the 1990s, National Guard units joined in small-scale overseas peacekeeping missions in Bosnia, Kosovo and the Sinai Peninsula.

But nothing could have prepared them for the shock of 9/11.

Suddenly, the U.S. needed military forces in all kinds of ways barely considered before. Hesse recalls being sent home within hours of the attack to pack a bag and prepare to deploy — somewhere.

Within three days, he was flying military refueling missions through America’s empty skies, which he described as “eerie as all get out.” Within a month, he was deployed to Europe.

“Everybody who left didn’t know when they’d be coming back,” Hesse said.

Since enlisting in 1988 while still in high school, Lt. Col. Russ Hewitt, 51, of Lincoln has lived through the Guard’s change from staying at home to deploying anytime, anywhere.

He is about to deploy overseas for the fifth time, this time as commander of the Kearney-based 734th Combat Sustainment Support Battalion. All of his deployments have taken place in the second half of his career.

In 2001, the National Guard mobilized just under 5,000 troops into federal service. Within three years, federally mobilized National Guard troops totaled more than 85,000, the highest number of the post-9/11 era.

Lt. Gen. Jon Jensen, a Council Bluffs native who is now the national director of the Army National Guard, said the early post-9/11 call-ups were marred by confusion and chaos.

“We had really lost the memory of how to do large-scale mobilizations with the Army National Guard,” he said. “We had not really done it since the Korean War. There was a struggle with how to do it.”

Many Guard units were undermanned and under-equipped and had to import personnel and equipment from other units, a process called cross-leveling.

Jensen commanded an infantry battalion from Minnesota through a mobilization for an Iraq deployment from 2005 to 2007. The two other battalions in its brigade had just returned from Bosnia and Kosovo, so they weren’t available to deploy.

Instead, they went to war with replacement units from Iowa and Nebraska.

“Leaders and soldiers were meeting each other (for the first time) at the mobilization station,” Jensen said.

It took some policy changes and almost a decade to untangle the problems of the mid-2000s. The Pentagon also leaned a bit less heavily on the National Guard later in the decade, calling up between 27,000 and 50,000 soldiers per year from 2005 to 2011. And in the years since, the number has never exceeded 25,000.

Jensen said that by 2010, the National Guard resolved the deployment problems and developed predictable, long-term schedules for individual units.

The enthusiasm for the National Guard’s post-9/11 transformation hasn’t been universal. In August, the Association of the United States Army — an influential organization of Army veterans — published a blistering critique of the recent use of the National Guard in an article on its website titled “The Reserve Component Crisis Necessitates Re-Examining the Total Army Concept.”

The article, written anonymously, alleged that the Guard and Reserve have been “overtaxed for decades” but particularly in the last two years because of call-ups to help during the COVID-19 pandemic, during the protests over the George Floyd killing and after the Jan. 6 invasion of the U.S. Capitol by supporters of former President Donald Trump.

The authors recommended returning the Guard and Reserve to a focus on responding to natural disasters and using them in combat only when Congress declares war.

“The problematic and systemic overuse of the reserve component cannot be fixed with extra money,” the author argued. “Our military leaders must reshape and utilize it according to its original purpose of a reserve force.”

The article drew an equally sharp response, penned by Bohac — currently president of the Adjutants General Association of the United States — and another National Guard major general.

The two generals said they were “dismayed and disappointed” by what they called a “poorly written, anonymous, Land Warfare Paper,” the premise of which, they said, was “completely untrue.”

They pointed to the high rate at which National Guard soldiers reenlist as a sign that morale is high.

“We saw people who left the service because they didn’t want to deploy,” Jensen said. “But we had a significant number of soldiers who came to the Guard because they wanted to deploy.”

Jeff and Kathy Claypool plan to retire next year, each with 34 years of National Guard service under their belts. They don’t regret their decision to stay in through multiple deployments. They found ways to adapt.

“I had to learn how to be a one-parent family,” Jeff Claypool said.

Sudanese man in NYC unable to talk to family

‘Like a bomb’ – Small town of Taylor rattled by building blast

“That's just not something that happens in a small, sleepy town. We’re pretty quiet, and so it really shook us.”

State Patrol spokesman Cody Thomas said it happened shortly after 5 a.m. Thursday when a State Patrol investigator was driving south on U.S. 77 in an unmarked vehicle 1 mile north of town.

No one knows why Benton Kinkead's three children never claimed his ashes. Now the Civil War veteran will be buried next to his wife at a cemetery in Plattsmouth.

The fourth-grader has spent the past year and a half learning how to code. “What I like about coding is that you can use your creativity,” he said. “And sometimes you can create apps to help people, also.”

Nebraska woman with cancer reconnects with pen pal from Wisconsin

Dorothy Reicks of Pierce and Joanne Thome of Wisconsin became pen pals about 73 years ago. Reicks, who has ovarian cancer, was surprised with a visit from Thome on last week in Grand Island.

The elephant barn at Omaha's Henry Doorly Zoo & Aquarium is getting an extra dose of baby-proofing.

The opinion says that in light of conflicting medical information, doctors should be free to use "additional tools that could save lives, keep patients out of the hospital and provide relief for our already strained healthcare system."

Next year, the 34-member Dannebrog Golf Course will have to pay several times more in rent than in the past — and share the course with longhorns.

Nebraska's most populous counties had rates that came in well below the statewide rate. But several rural counties had per-capita case counts two to three times the state rate, according to state figures.

Brian Forbes found a way to channel his stress and soothe his mental scar tissue. An obsession. A mission: He wanted to be one of the few people in the world to bench-press 1,000 pounds.

A soldier with the Iowa National Guard's 1st Battalion, 168th Infantry Regiment stands in a security position as the Afghan National Army and others search for hidden weapons in Afghanistan in March 2011.

1st Lt. Justin Schultz of Council Bluffs gets laughs as he tries to speak Pashto in Afghanistan in March 2011. 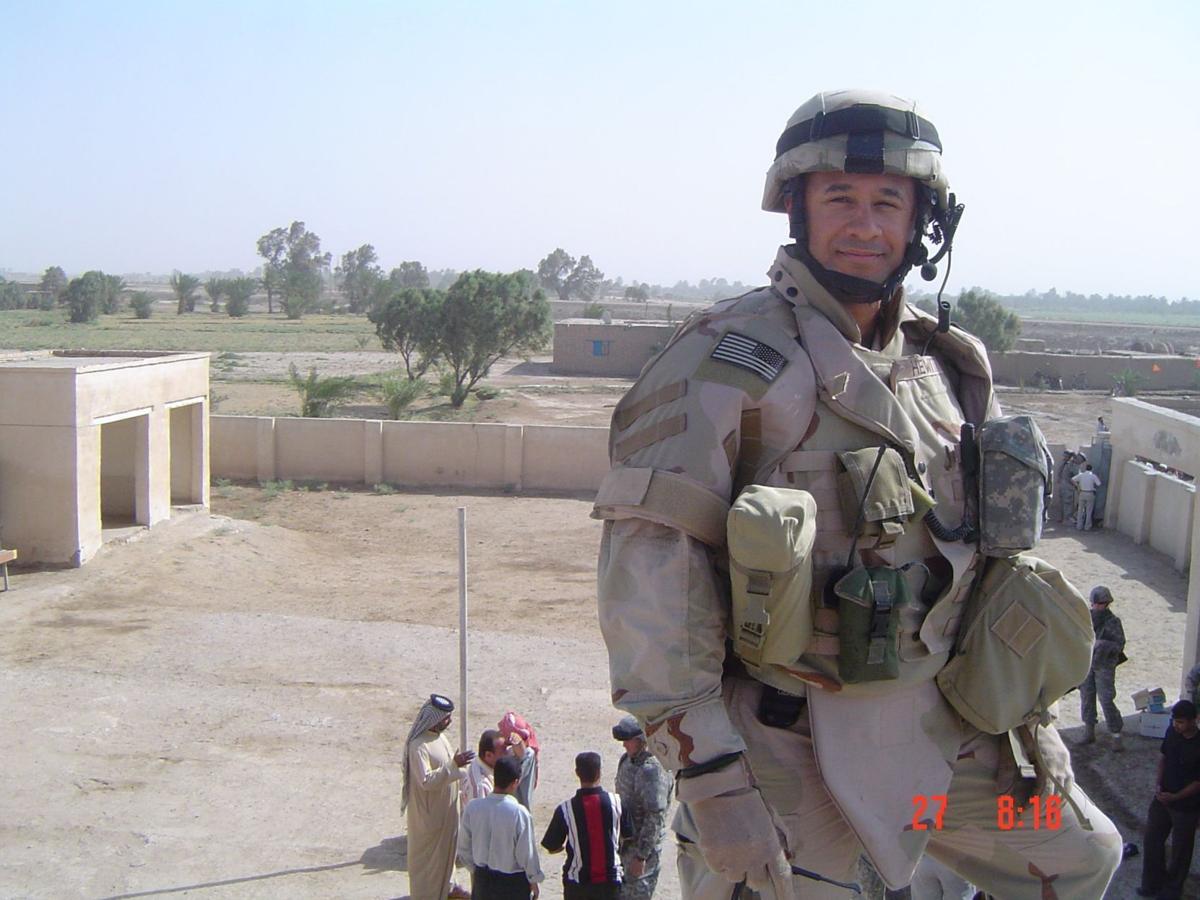 Lt. Col. Russ Hewitt of the Nebraska Army National Guard in Iraq in 2006, when he was a first lieutenant. Since enlisting in 1988 while still in high school, Hewitt has lived through the Guard’s change from staying at home to deploying anytime, anywhere, and the Lincoln resident is about to deploy overseas for the fifth time. 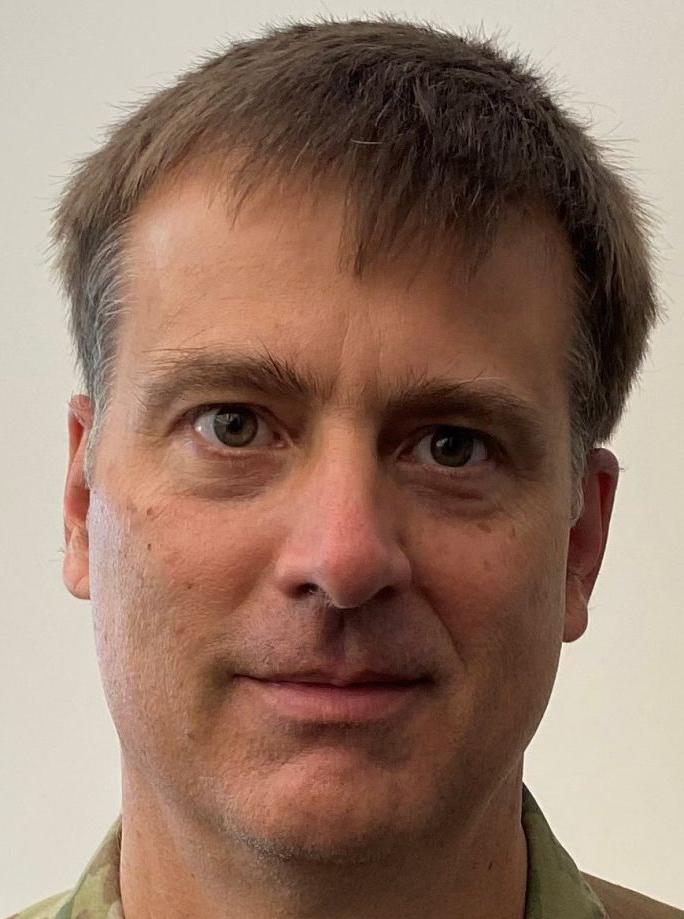