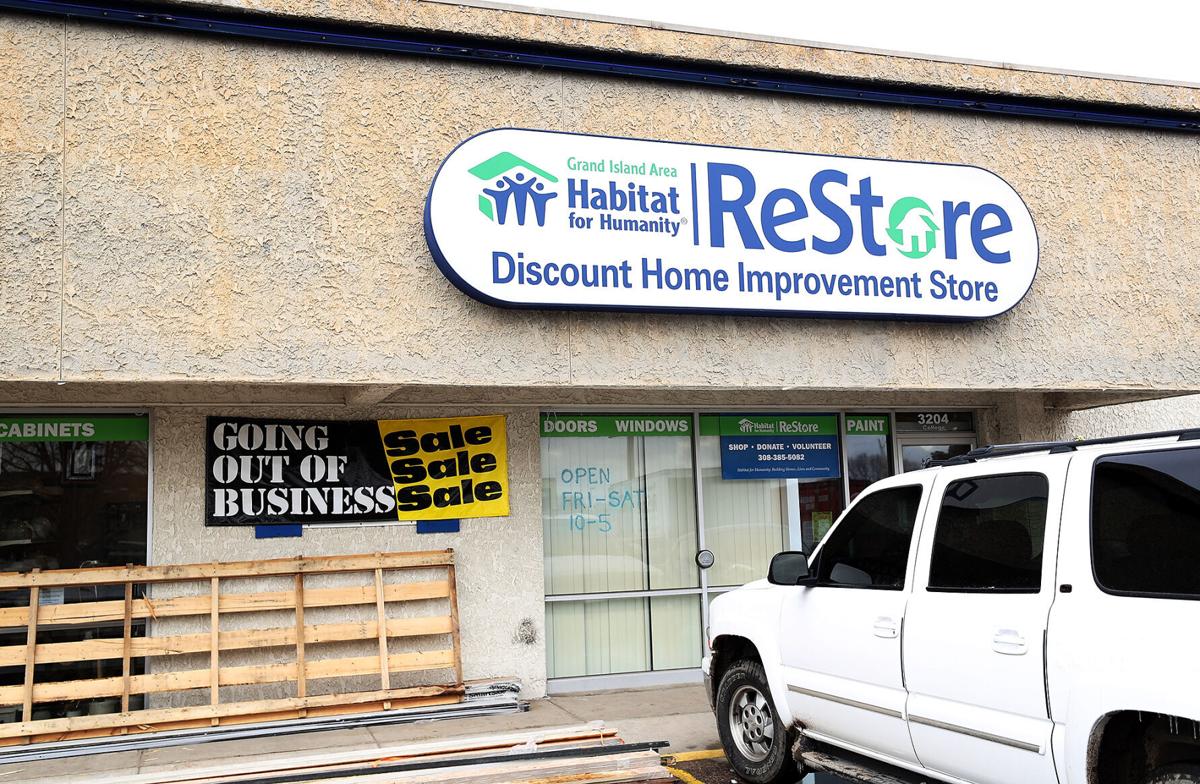 The Habitat For Humanity ReStore, 3204 College St. in Grand Island, is going out of business. (Independent/Josh Salmon) 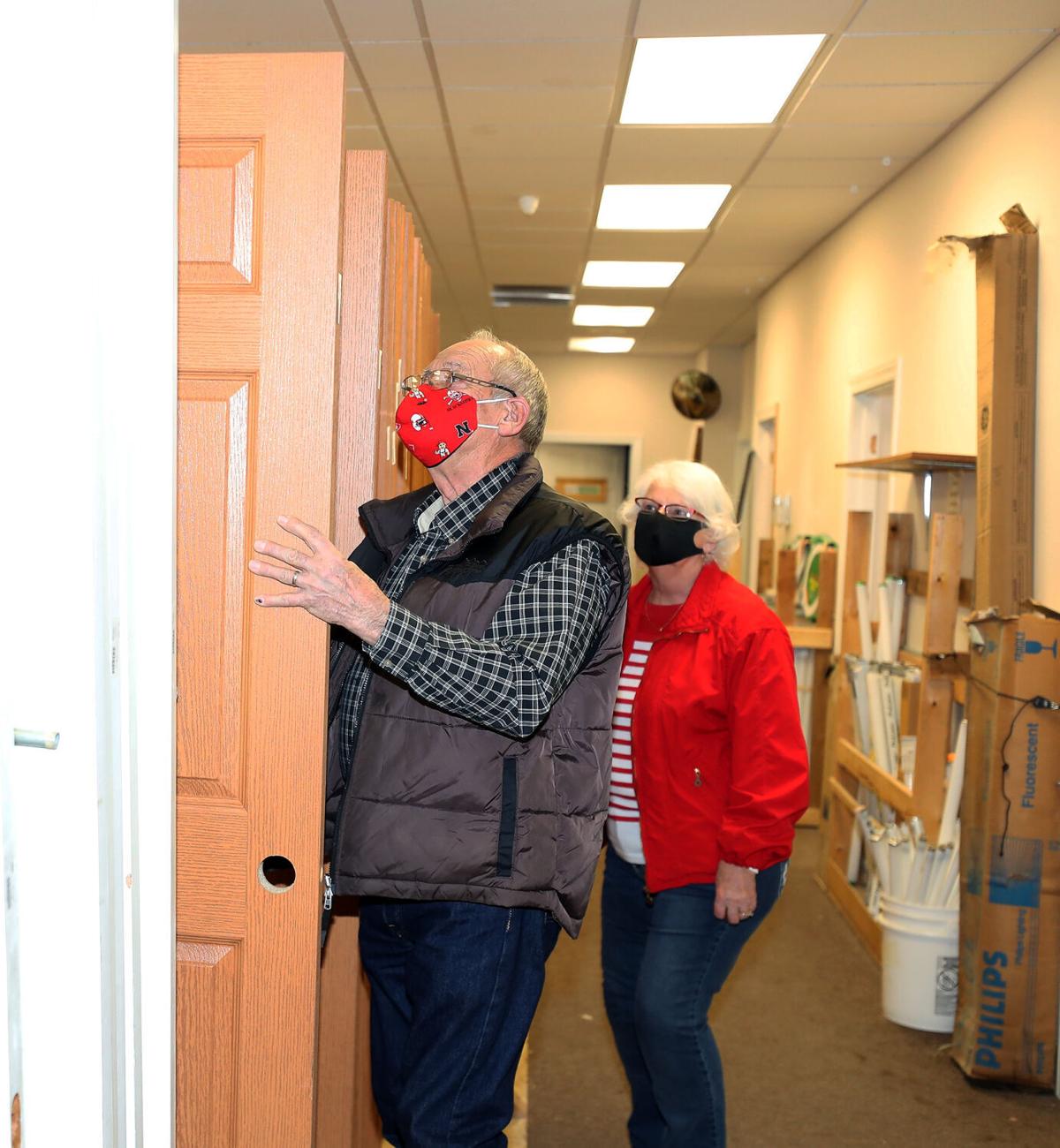 Wes and Shari Luther of Ainsworth came to Grand Island to check out the Habitat For Humanity Restore. They were surprised to hear it will be going out of business soon. (Independent/Josh Salmon) 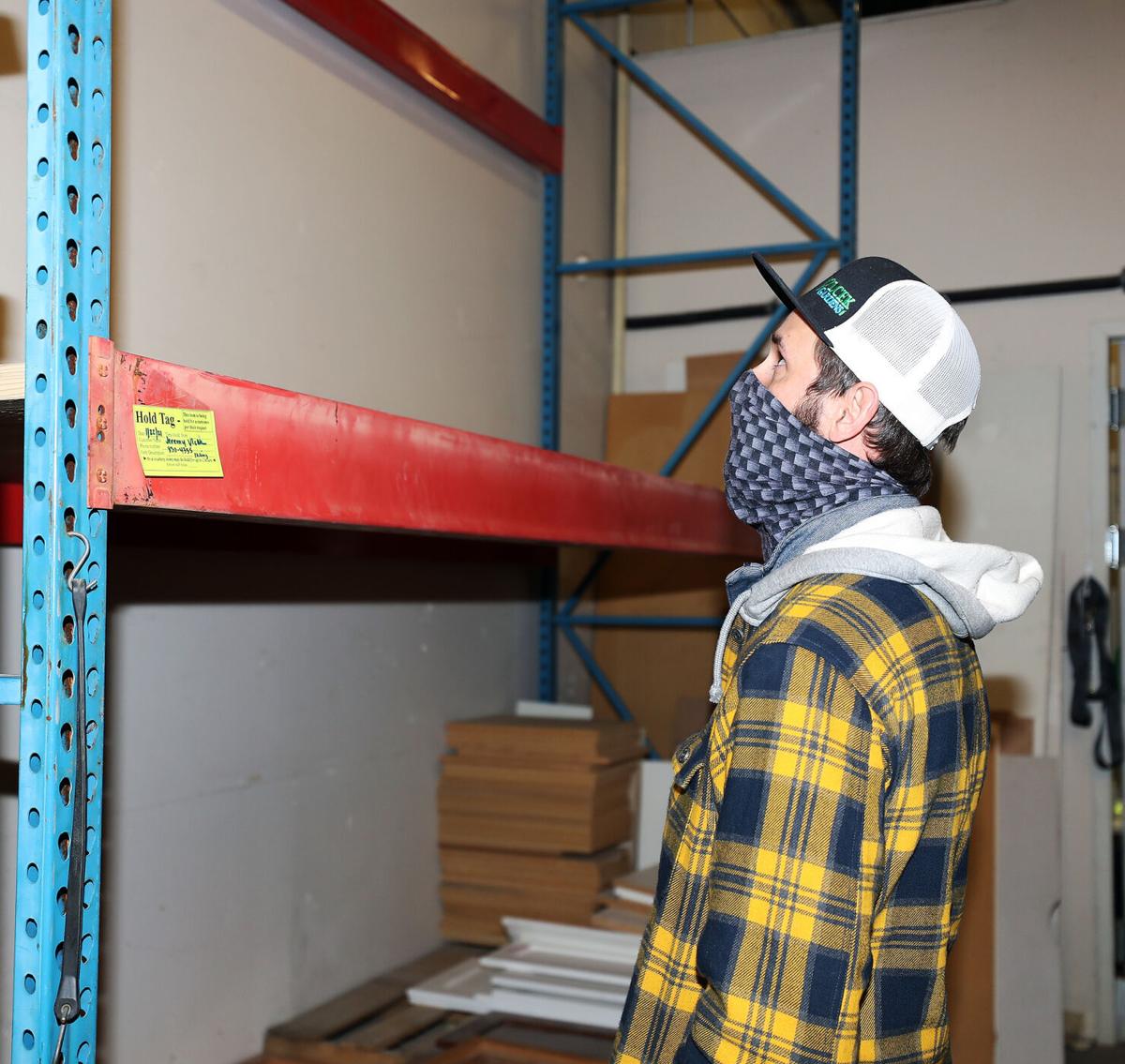 Jeremy Vlcek of Vlcek Gardens checks out a large metal shelving unit at the Habitat for Humanity Restore in Grand Island. Vlcek, from Chapman, hopes to use the shelf for his business. The Restore is going out of business. (Independent/Josh Salmon)

Those trends were accelerated by the pandemic, which is why Habitat’s ReStore is closing.

Today might be the last day of operations for the store at 3204 W. College St. in Main Street Station. The hours today are 10 a.m. to 5 p.m.

Many of the customers have been landlords, people doing home repairs and folks building cabins.

The most popular items during the years have been cabinets, doors, windows and major appliances.

Almost everything sold at the store has been donated. The only exception was recycled paint, which Habitat purchased.

ReStore probably was busiest in 2018.

The floods of 2019 played a role in the decline of business.

When your basement is flooded, “you’re not donating stuff that you’re taking out, and you’re buying new because you need to,” Jelinek said.

Even though Grand Island didn’t have much flooding in 2019, there was so much rain that people got behind on construction.

As a result, “we started to get behind,” she said.

Jelinek and her 18-person board figured it might take about three years to “get back to a normal track of construction” in the community.

But the arrival of COVID-19 hastened trends that already were underway.

Habitat for Humanity works with many people in the building trade.

Local contractors have been extremely busy, but life has been difficult for them because of business shutdowns, Jelinek said. Not only are lumber costs sky-high, but it’s hard to get plumbing supplies and appliances.

The supply chain has been disrupted. “We have had great difficulty getting the siding we normally use,” Jelinek said.

Although the ReStore has many fans in Grand Island, business has not been what it was.

“One person said they were really sad to see it go. They loved the store, and they mentioned they hadn’t been in there in two years,” Jelinek said.

The struggles are typical of many brick-and-mortar stores, she said. People don’t want to see stores close, but if they’re buying items online, local businesses suffer.

Many Habitat for Humanity locations across the country have a ReStore. For many years, the only Nebraska location was in Omaha. “And we were all encouraged to look into it,” Jelinek said.

Habitat has a yearlong plan that stores “have to go through and get approved to have a ReStore,” she said. “So even though we opened in 2012, we started working on opening a ReStore in 2010.”

Lincoln is also home to a ReStore. Grand Island Habitat encourages people to support the Lincoln and Omaha outlets.

Profits from ReStore are meant to help Habitat build houses.

In Grand Island, “the goal was always that it would fund a house a year,” Jelinek said. “And we’ve only been able to do that one time in eight years.”

Without the ReStore income, Habitat will have to find more grants, she said.

“In a year where COVID has made it very difficult to keep budgets in check, it’s going to be challenging,” she said.

Because of the problems brought about by COVID-19, market changes and excess moisture in 2019, “we might have to reduce the number of houses we build for a little while,” she said.

In an email sent to The Independent on Friday, Jelinek wrote that the closing was a tough board decision.

“Sales and operations were discussed on a monthly basis by both the ReStore and Finance Committees and at board meetings,” she wrote. “Since 2019, sales were on a decline for many reasons, while expenses were on the rise. Our reporting to Habitat for Humanity International showed that the store had losses of over $30,000 in 2020, and that’s without factoring in all the expenses.

“Although the Buy, Sell, Trade groups impacted our sales, they are a great way for people to continue to recycle and repurpose items rather than have them end up in a landfill,” Jelinek wrote. “We will continue to recycle aluminum cans and vehicles, plus products from our construction sites.”

The people who are saddest about the ReStore closure are the customers and staff members.

Three people work at the store, augmented by volunteers.

Since ReStore’s imminent closure was announced, Fridays have been “crazy busy” at the store, Jelinek said. Donated items are priced at half-off during the going-out-of-business sale.

Habitat doesn’t know for sure whether today will be the store’s final day. That decision will be made this afternoon.

Jelinek and a board member have been pitching in at the store Fridays and Saturdays during the closeout sale.

The ReStore may open again next week. In either case, the fixtures still will be sold.

Habitat for Humanity, a nonprofit organization, will continue to focus on its home building and loan program.

Going out of business sale

Where: Habitat for Humanity ReStore

When they tested positive, their expected 12-day trip turned into an expensive, extended ordeal as they tried to navigate the various requirements to get back on an airplane and return to the U.S.

Johnny Rodgers was hospitalized Thanksgiving morning at the Nebraska Medical Center and was admitted to the intensive care unit a few days later.

Powder River Basin coal is known for its stability, its weekly spot price fluctuating by just $5 per short ton. But on Oct. 29, the coal passed $14 for the first time since 2011. Two weeks later, the spot price soared to a record $30.70.

"Our mobile bloodhounds did what they do. They just followed the fluid trail right to his driveway and contacted (Brian) Schleicher there,” Grand Island Police Capt. Jim Duering said.

Woman with COVID-19 who spit on walls at Lincoln hospital, punched nurse found not responsible

A hearing is set in January to consider if there is probable cause to find the 49-year-old Lincoln woman dangerous to herself or others by reason of mental illness or defect.

Feds have more than 11,600 pages of documents, 50 recordings in Rep. Fortenberry case

Prosecutors have turned over more than 11,600 pages of documents and more than 50 audio and video recordings to lawyers defending Rep. Jeff Fortenberry.

Pillen campaign officials said that the "not that bad" comment was taken out of context and that he was really making a point about excessive federal spending.

About 500 Afghan refugees have arrived in Nebraska; resettlement agencies swamped

Finding housing is proving to be a challenge. While many people have been placed in apartments or rental houses, some are staying in such temporary lodging as Airbnbs and extended-stay hotels for now.

The Habitat For Humanity ReStore, 3204 College St. in Grand Island, is going out of business. (Independent/Josh Salmon)

Wes and Shari Luther of Ainsworth came to Grand Island to check out the Habitat For Humanity Restore. They were surprised to hear it will be going out of business soon. (Independent/Josh Salmon)

Jeremy Vlcek of Vlcek Gardens checks out a large metal shelving unit at the Habitat for Humanity Restore in Grand Island. Vlcek, from Chapman, hopes to use the shelf for his business. The Restore is going out of business. (Independent/Josh Salmon)