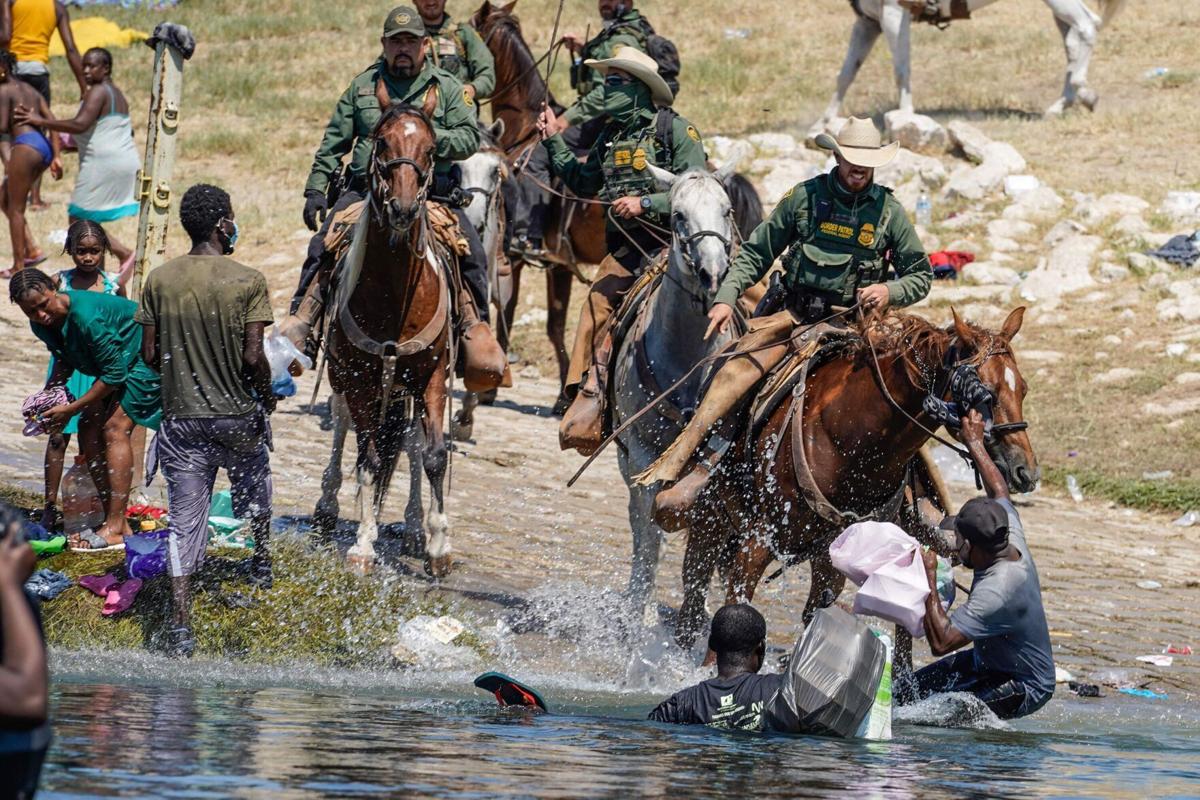 United States Border Patrol agents on horseback tries to stop Haitian migrants from entering an encampment on the banks of the Rio Grande near the Acuna Del Rio International Bridge in Del Rio, Texas on September 19. 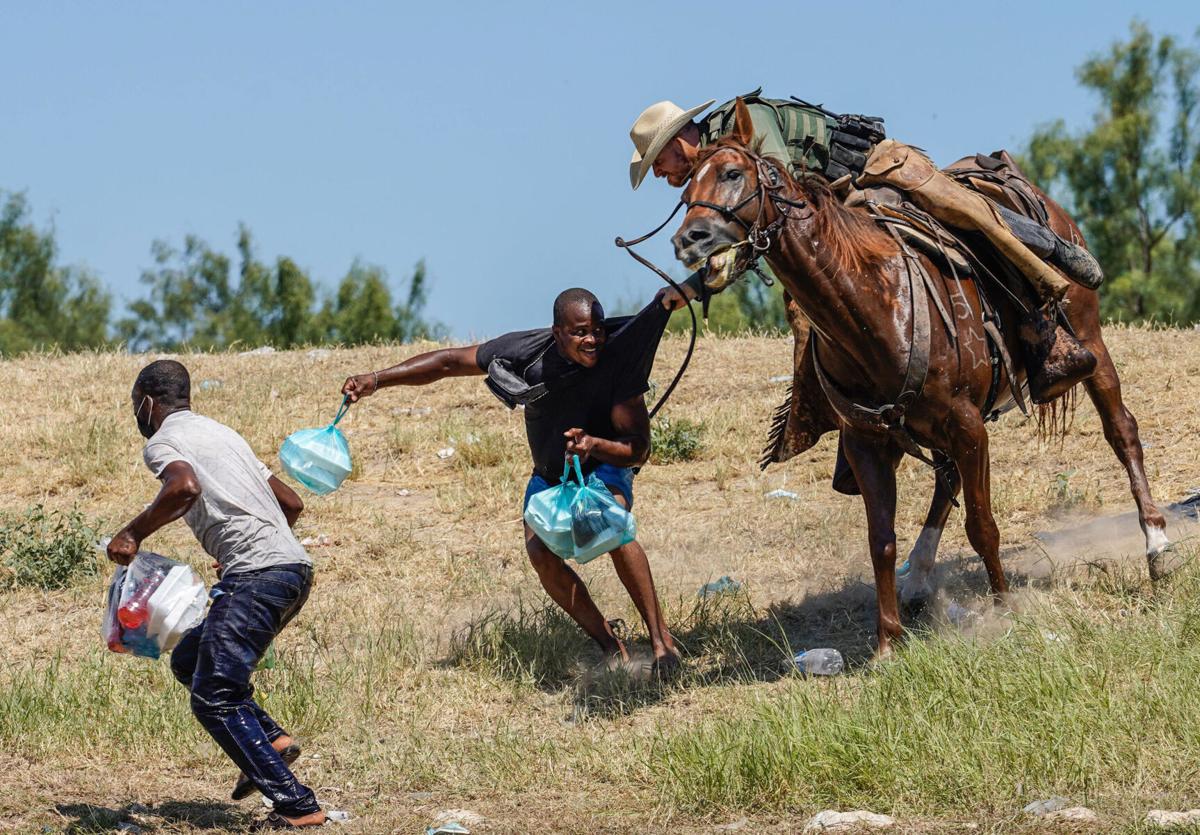 White House press secretary Jen Psaki says that the White House is seeking more information on the "horrific" viral videos that appear to show US Border Patrol agents on horseback confronting Haitian refugees at the US border.

White House press secretary Jen Psaki said Monday that the White House is seeking more information on the "horrific" viral videos that appear to show US Border Patrol agents on horseback confronting Haitian refugees at the US border.

Reuters video shows the officers at the water's edge, twirling the long reins as migrants crossed the border at the US shoreline of the Rio Grande. At one point in the video, the officer's horse nearly charges into one of the migrants, who falls back and into the water.

Although the profanity is redacted in the video report, Al Jazeera English reporter John Holman published the full quote -- he attributed it to an unnamed Border Patrol agent -- on his Twitter.

The scene played out near a crowded makeshift encampment in Del Rio, where thousands of migrants -- including families, pregnant women and babies -- have gathered under the Del Rio International Bridge. They sleep in the dirt, surrounded by growing piles of garbage, exposed to the elements and without much food and water, in hopes of being processed by the overwhelmed US Border Patrol.

Pressed by reporters Monday for response to the footage, Psaki called it "horrible to watch."

"I can't imagine what the scenario is where that would be appropriate, I'm certainly not suggesting that, but we've just seen the footage earlier this morning," she said. Asked if the agents seen in the footage should be fired for their actions in dealing with migrants, Psaki said: "Of course they should never be able to do it again."

"I don't know what the circumstances would be. It's obviously horrific, the footage. I don't have any more information on it, so let me venture to do that and we'll see if there's more to convey," she added.

Homeland Security Secretary Alejandro Mayorkas, speaking at a news conference near the border on Monday, defended the use of horse patrols but said the department would investigate the situation.

In a series of tweets Monday evening, DHS said it "does not tolerate the abuse of migrants in our custody" and that US Customs and Border Protection's Office of Professional Responsibility is investigating the incident.

The department said Mayorkas "directed that personnel from the Office of Professional Responsibility be on site full-time to ensure that the responsibilities of DHS personnel are executed consistent with applicable policies and training and the Department's values."

"The footage is extremely troubling and the facts learned from the full investigation, which will be conducted swiftly, will define the appropriate disciplinary actions to be taken."

Earlier Monday, Mayorkas had said, according to US Border Patrol Chief Raul Ortiz, that long reins are used to ensure control of the horse.

"[B]ut we are going to investigate the facts to ensure that the situation is as we understand it to be, and if it's anything different we will respond accordingly," he said.

Speaking alongside Mayorkas, Ortiz said horse patrol units play an integral part in the security response in Del Rio. "As you know, we have about half of this area locked down, and we're working on trying to get the other side of the bridge completely locked down," he said.

Ortiz said he had asked that the horse patrol unit do an assessment on Sunday to find out if any individuals were in distress and to provide information and intelligence on the smuggling organization's activities in and around the river.

"As was witnessed in the video and some of the pictures, the migrants were going back-and-forth. We do not know who are the smugglers or who are the migrants, so it's important that those Border Patrol agents maintain a level of security for both themselves and for the migrant population," he said.

Ortiz, who said he has ridden horses for several years, also pointed to the difficulty of operating in a riverine environment on horseback.

Maintaining control of the horses "so we do not get in a position where we injure a migrant as they're trying to make that treacherous trek across that river is probably more important than anything," he said. "And I'm pretty sure and confident that that's exactly what was happening, but we will certainly look into the matter, to make sure that we do not have any activity that could be construed as a response to a law enforcement effort that is unacceptable."

When asked about whether whirling the long reins around migrants was a humane way to treat them, Mayorkas responded by saying, "You're assuming facts that have not yet been determined."

Many of the Haitians currently at the border are believed to have been living in South America after the 2010 earthquake in Haiti, but the toll of the coronavirus pandemic on the region fueled migration to the US southern border.

Haiti is also still reeling from an earthquake in August that resulted in more than 2,000 deaths and thousands more injuries, as well as the assassination of President Jovenel Moise in July. For those reasons, more than 50 Democratic lawmakers urged the Biden administration in a letter earlier this month to halt deportations to the country.

This story has been updated with additional developments Monday.

Watch Now: What will it take to keep schools open?

“I don’t think anyone seeing that footage would think it acceptable or appropriate," White House press secretary Jen Psaki said.

United States Border Patrol agents on horseback tries to stop Haitian migrants from entering an encampment on the banks of the Rio Grande near the Acuna Del Rio International Bridge in Del Rio, Texas on September 19.

White House press secretary Jen Psaki says that the White House is seeking more information on the "horrific" viral videos that appear to show US Border Patrol agents on horseback confronting Haitian refugees at the US border.