A Cash-Wa employee gives instructions to a cluster of volunteers Friday morning. Cash-Wa provides the blue garments and head coverings. 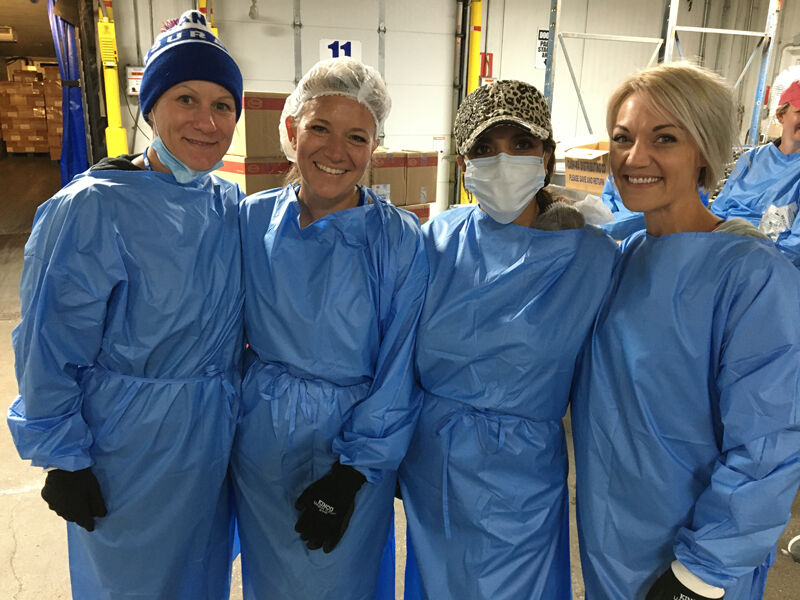 From left, Miki Yaw, Christina Teager, Mari Beck and Marissa Morgan had fun and worked hard at Cash-Wa. They are part of a group called Connect, Inspire and Recharge that used to meet for breakfast until COVID-19 interfered. 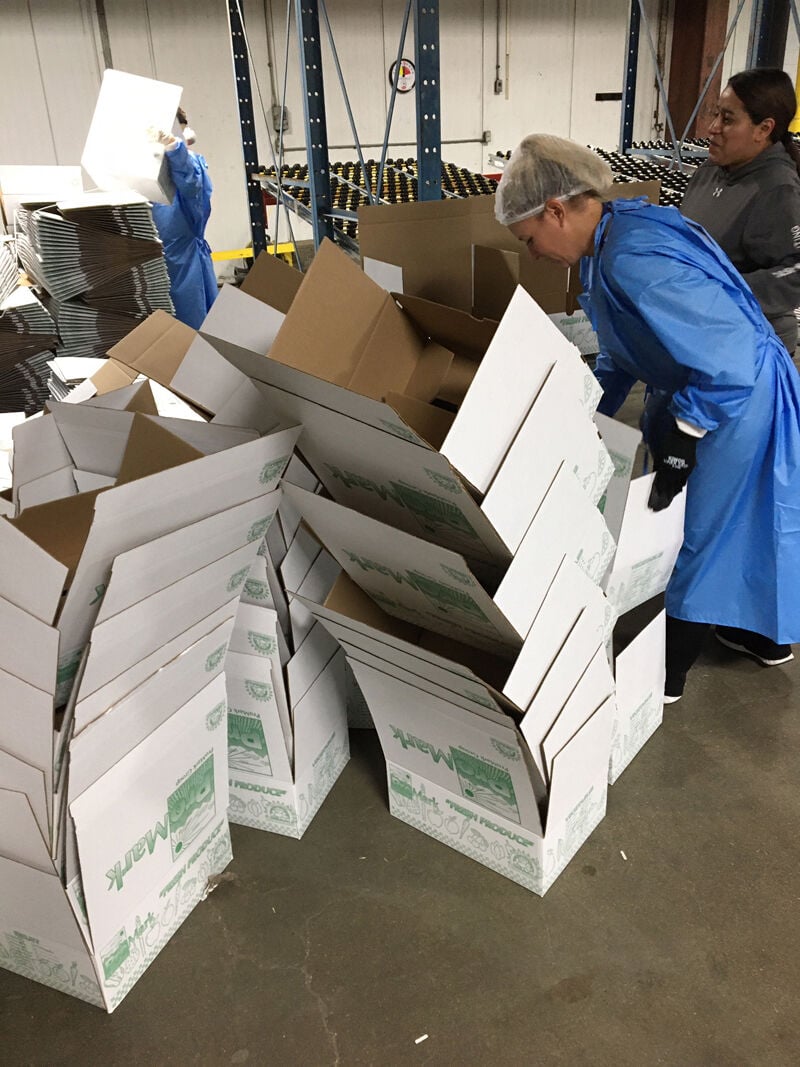 Christine Teager unfolds boxes that will be filled with food items by volunteers. 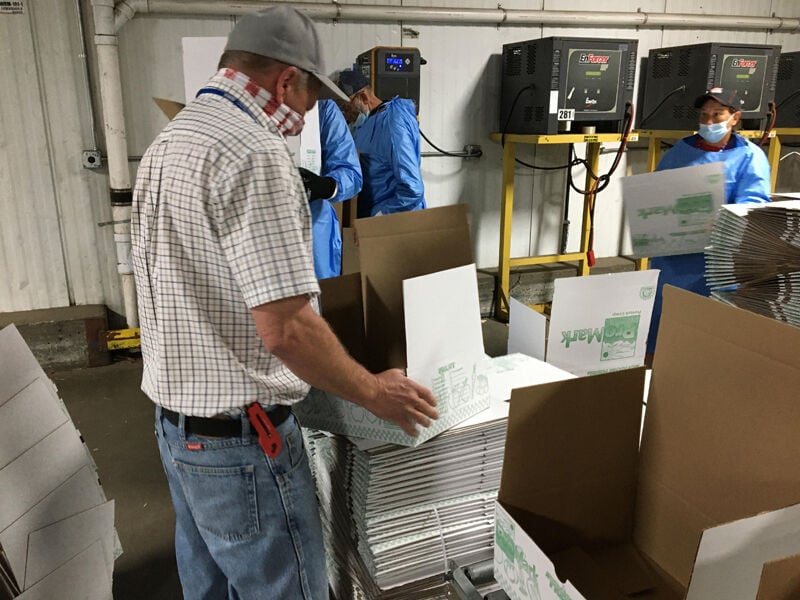 A Cash-Wa employee gives instructions to a cluster of volunteers Friday morning. Cash-Wa provides the blue garments and head coverings.

From left, Miki Yaw, Christina Teager, Mari Beck and Marissa Morgan had fun and worked hard at Cash-Wa. They are part of a group called Connect, Inspire and Recharge that used to meet for breakfast until COVID-19 interfered.

Christine Teager unfolds boxes that will be filled with food items by volunteers.

KEARNEY — Before COVID-19, Miki Yaw, Christina Teager, Mari Heck and Marissa Morgan got together with friends for breakfast now and then. They would laugh, talk about their families and just enjoy being together.

Friday morning, the four women moved that camaraderie to Cash-Wa Distributing, 401 W. Fourth St. They were among 16 volunteers who helped fill boxes for the federal Farmers to Families Food Box Program, which distributes food to schools, food banks, faith-based organizations and nonprofit organizations during the COVID-19 crisis.

It’s part of the $3 billion U.S. Department of Agriculture program that distributes produce, dairy and meat products to food-insecure people in four states.

There is a demand for the food.

Last week, nearly 3,000 filled Farmers to Families boxes were delivered to St. Ann’s Church in Lexington. Cars stretched from the church at 301 E. Sixth St. three-quarters of a mile south to Highway 30, and a half-mile west on Highway 30.

“Police had to come and help direct traffic,” said Dick Cochran, founder and president of Hot Meals USA. “It took an hour to deliver it all.”

He added, “It’s remarkable that Kearney is feeding people in four states: Nebraska, North Dakota, South Dakota and Minnesota. With the public’s help, we can make Kearney the city that fed Nebraska when Nebraska needed it.”

Cochran, whose Hot Meals U.S.A. program fed free hot meals throughout central Nebraska after two floods in 2019 and the COVID-19 pandemic, was responsible for getting the USDA surplus food delivered to Kearney, but it’s been a bumpy road.

Last spring, Cash-Wa contacted Kyla Martin, director of development at Community Action Partnership of Mid-Nebraska and oversees its Food Bank. Cash-Wa wanted to bid on the Farmers to Families program and give the food to the Food Bank. However, the USDA awarded the bid to C&C Produce, a Kansas City company that was authorized to, but did not, deliver any food to Nebraska, South Dakota or North Dakota. A furious Cochran contacted the office of U.S. Sen. Ben Sasse. He also called the USDA every day.

That did the trick.

Not long after that, Cochran called Martin and told her that a semitruck load of produce was on its way to the MONA parking lot, where Cochran’s Hot Meals U.S.A. was serving lunch every day.

However, the boxes needed to be unloaded with a forklift, and the MONA site was not set up for that. Cochran suggested that the Food Bank accept the truck. Martin agreed.

“The Food Bank has a brick-and-mortar site and a forklift and a staff,” she said. “But we had just a few days to get it up and running.”

The first semi load arrived May 21 in the rain. The Food Bank unloaded the truck and sent the rest to the Lexington Foundation, which distributed the food at the same time that Cochran’s Hot Meals USA was serving free meals.

Meanwhile, Denise Zwiener, executive director of Buffalo County Community Partners, got a $50,000 grant from the First Lady of Nebraska and earmarked it for food security.

As word of the program spread, other nonprofits asked if they could get food boxes, too. C&C Produce, still delivering the food, offered to deliver more to Kearney, but the Food Bank would have to take an entire truckload.

“That’s how the list got so big. Salvation Army wanted in, but I couldn’t get them in unless we ordered a lot more food, so I started contacting low-income housing places and other nonprofits,” Martin said.

Within a week, the USDA invited Cash-Wa to resubmit its bid. Cash-Wa won a supplemental contract to provide USDA surplus food to underserved areas in Nebraska, North Dakota and South Dakota starting the first week in July. Each box would contain precooked meats, dairy, produce and a half-gallon of milk.

It’s been a huge task, not without challenges. “Cash-Wa bit off a big hunk of the elephant instead of one bite at a time. They are really struggling to pack up all these boxes,” Martin said.

Enter Cochran, who relies on volunteers for his Hot Meals USA effort. Enter the Kearney Area Community Foundation, which helped spread the word that volunteers are needed to help pack the boxes and posted a sign-up link on its website.

“This project may be the largest community project Kearney has ever undertaken,” Cochran said. “I don’t know when Kearney has come together to feed literally millions of meals to needy families.”

Friday morning, Cochran worked alongside 16 individuals who showed up to help, including the four members of that breakfast club. They all wear blue gowns and hairnets and work inside a building that’s about 45 degrees.

They worked hard, too.

Steve Botsfield, a retiree, volunteered with Hot Meals USA when it was serving free lunches in the MONA parking lot. “I enjoy giving of myself,” he said. He was heading off to volunteer elsewhere that afternoon.

By 10:30, one semi had been loaded and another was due to arrive. Pallets were being scooted around the floor. Each pallet held 800 boxes. Each box contains enough food for 25 meals, according to USDA.

Volunteers chatted between stints of work, but breaks were few.

“All the volunteers do the manual labor. We just lug and pack the boxes,” Cochran said. Semis deliver the food far beyond Kearney.

By the time the effort ends sometime in August, nearly $16 million worth of food will have been distributed. USDA is paying for the food. Cash-Wa is simply supplying the location.

Elaine Sluti was volunteering for Farmers to Families for the second time Friday morning. “This is something I can do to help others during this difficult time,” she said.