'They all have their own personality': Vintage motocross bikes hit the dirt on Pleasanton track
Share this
{{featured_button_text}}
1 of 3 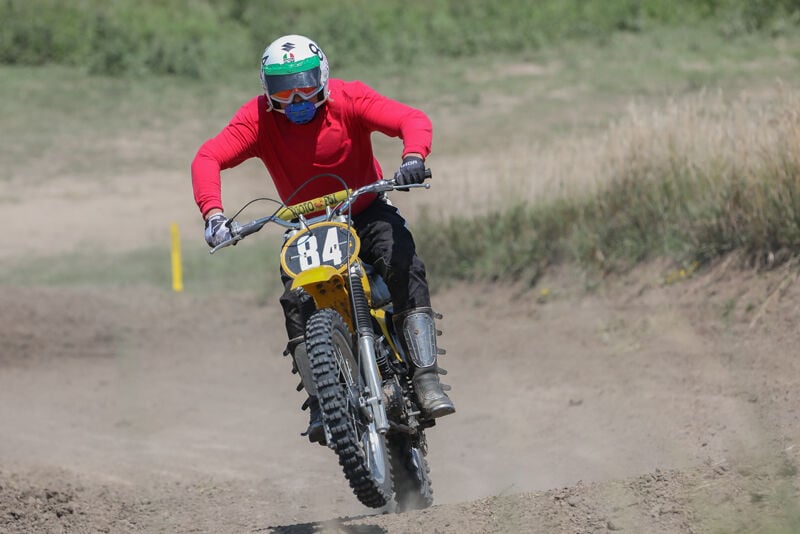 Kent Taylor of Lincoln rode his 1977 Suzuki M125 in the Vintage Motocross Race Sunday afternoon at the Pleasanton Motocross Grounds. Taylor is the president of the Great Plains Vintage Motocross Association based in Nebraska, which organized the race for competitors riding 1960s up to modern dirt bikes. 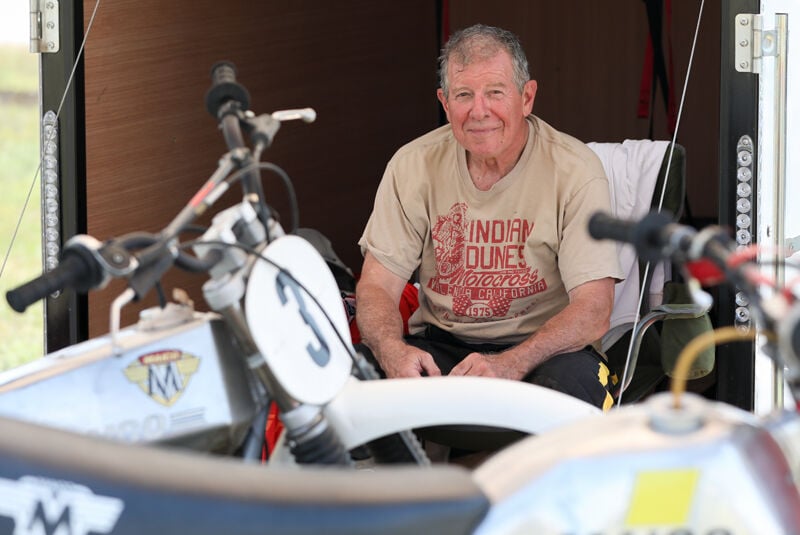 Lynn Larson of Lincoln competed with his 1974 Maico dirt bike that he has rode since that same year. Larson used to sell the German-made bikes from a Lincoln store. 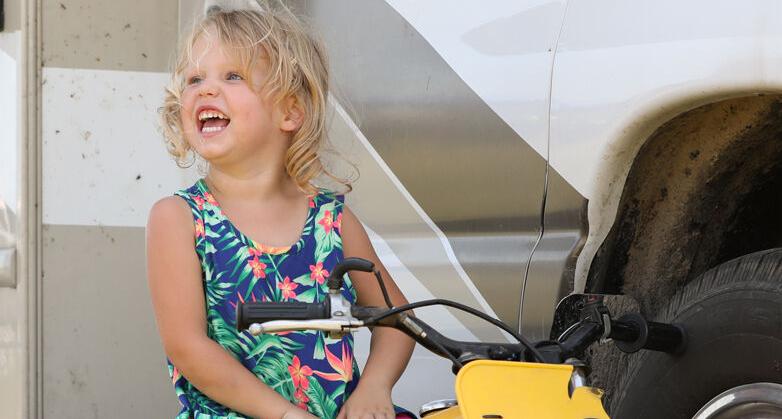 Bindi West, 3, smiles as she sits on her new Suzuki dirt bike. Bindi’s dad, Chad West of Marshalltown, Iowa, bought the bike from another rider Sunday.

PLEASANTON — Dirt bikes buzzed over hills and looped around twists and turns of a dirt track on the Nebraska prairie Sunday afternoon as the sun beat down.

Motorcycles from different eras — 1960s to modern — beamed as they took to the track southeast of Pleasanton in a Vintage Motocross Race.

Great Plains Vintage Motocross Association President Kent Taylor of Lincoln was one of many people who brought an old bike to the race. He worked the track on his 1977 Suzuki M125.

Taylor, who has raced a bike since he was a kid in the mid-1970s, said he likes riding vintage bikes because they were what he grew up reading about and watching his heroes ride. He also appreciates the characteristics of older dirt bikes.

“I like that they have character. They’re old bikes. They’re easier to work on,” he said. “All the manufacturers were trying to figure out what motorcycling and motocross was all about. But they all were doing it differently and all the bikes look different, and they all have their own personality. And today, they all look pretty much look alike.”

The race drew 164 entries, which Taylor said has grown from five entries in his organization’s first race seven years ago. Before Great Plains Vintage Motocross Association was established, he said motocross enthusiasts had to ride modern bikes at Nebraska competitions.

“You had to ride tracks that were ... challenging in ways where when you’re 57 you don’t want to be challenged like that. You don’t want to see a double jump,” he said. “So you have to sail over that second jump. That’s what the sport is about today. If you come up short, you’re going to hit that. You’re going to get hurt. And that’s just a chance I don’t want to take.”

He said Dorothy took out some obstacles from his track to make it safer for the vintage race, which Taylor said is even attractive to modern motocross riders.

“The thing that you want to remember is that I just want to run my dirt bike. I want to go out and ride in the dirt and just have fun and when you’re intimidated by the track, it’s not fun,” Taylor said. “So even though guys have modern bikes, they’re still finding that they’re having a good time on an old school track.”

Having fun is the reason why Rob Thornton and Kent Hanson, both of Atlantic, Iowa, drove four hours to race their post-vintage (1975-81) and modern bikes near Pleasanton.

“It’s all about having fun. As long as we can keep riding, we’re gonna,” Thornton said.

The allure of the vintage bikes, he said, is their age.

“They’re old like us,” he quipped. “It’s what we rode when we were young.”

Lynn Larson of Lincoln and Jesse Wessels of Alma also joked that they like the bikes because of their age. Larson, who is almost 70 said he has participated in motocross since ‘74 on the same Maico dirt bike. For awhile he took a break to race cars, but he said it was expensive and not as fun as motocross.

Larson also used to sell Maico dirt bikes, which were made in Germany. Taylor said some people would say it was the premium bike of its time because it was fast and handled well.

“An old Maico from 1980 would be nearly as fast, in some cases faster, than some bikes being made today,” he said.

Wessels bought his Maico brand new in 1980 from Larson. He raced it Sunday and won his race, which included a few modern bikes.

Larson said the experience of the rider is just as important as the quality of the bike.

“So the age of the bike, if you get to know them, isn’t as important as your own dedication and preparation and skill,” he said.

Wessels said the older dirt bikes are easier to fix on his own.

“Back in the day you had to know the secrets and stuff, which is like cars. You could work on them,” he said. “Now the modern stuff, there’s not much you can do to them.”

Taylor said the newer bikes are intimidating to fix because they have a more complex four-stroke engine. The bikes also are heavier than older bikes, which have two-stroke engines, were simply manufactured and are lightweight.

“I don’t like to be riding something I don’t think I can fix,” he said. “My old motorcycle has a motor and a carburetor, and there really isn’t much that needs to be done to it that I can’t fix. And I’m not a trained mechanic, but I know how to work on a simple bike.”

Jeff Young of Lincoln also likes tinkering on bikes. He got into the motocross sport last year, and rides a 1982 Husqvarna 250XC.

“You might as well race them if you fix them,” he said.

A Kearney man has received additional prison time for distributing drugs in Kearney.

Norris Marshall, one of Kearney’s major employers, has set his succession plan into motion, and it eventually could transform BluePrint Engines into an employee-owned company.

A Bertrand man was arrested Friday for first-degree sexual assault of a child and child abuse.

CBD works on the body’s cannabinoids system, a complex cell-signaling system active in the body even if a person doesn’t use cannabis.

Kent Taylor of Lincoln rode his 1977 Suzuki M125 in the Vintage Motocross Race Sunday afternoon at the Pleasanton Motocross Grounds. Taylor is the president of the Great Plains Vintage Motocross Association based in Nebraska, which organized the race for competitors riding 1960s up to modern dirt bikes.

Lynn Larson of Lincoln competed with his 1974 Maico dirt bike that he has rode since that same year. Larson used to sell the German-made bikes from a Lincoln store.

Bindi West, 3, smiles as she sits on her new Suzuki dirt bike. Bindi’s dad, Chad West of Marshalltown, Iowa, bought the bike from another rider Sunday.