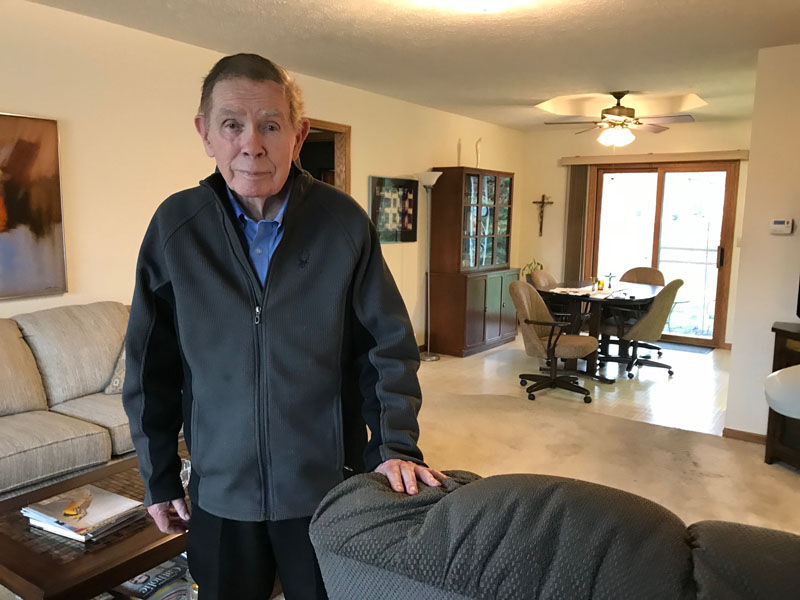 Father Donald O’Brien retired to Kearney six years ago, and soon after discovered problems with the assessed valuation of his house. He protested the valuation multiple times, but the final solution came with an in-person inspection by the Buffalo County Assessor’s office. 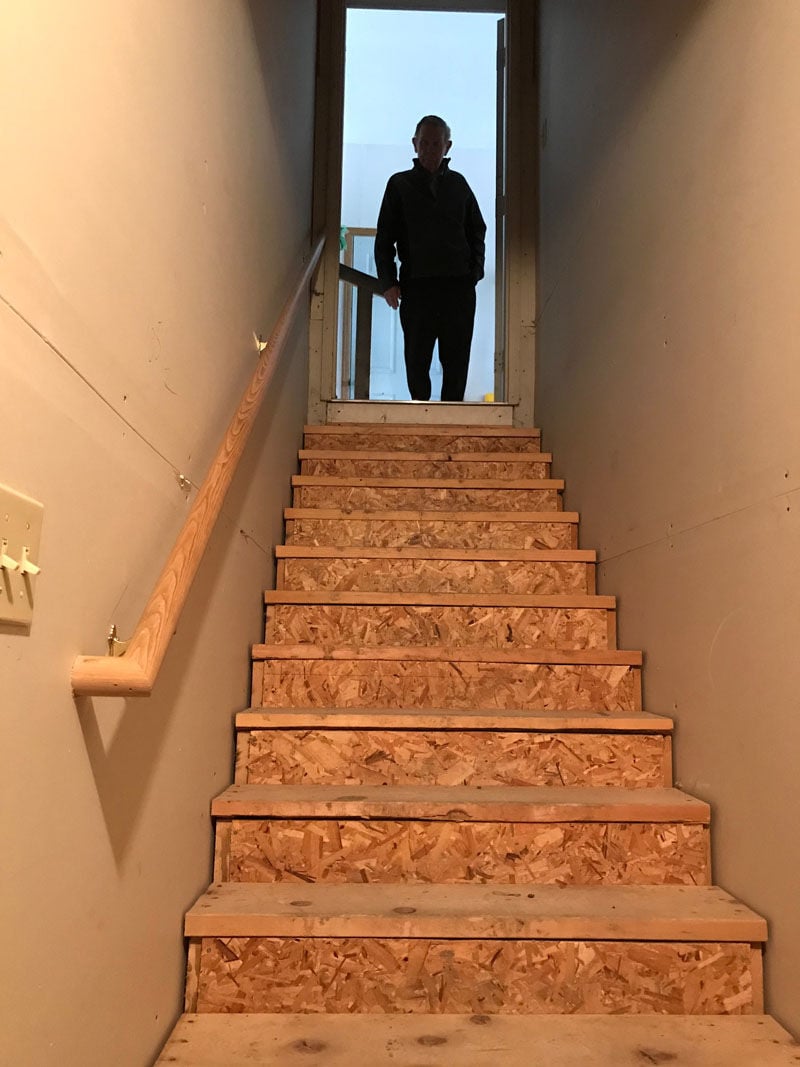 Even the long, narrow staircase to the basement is unfinished. 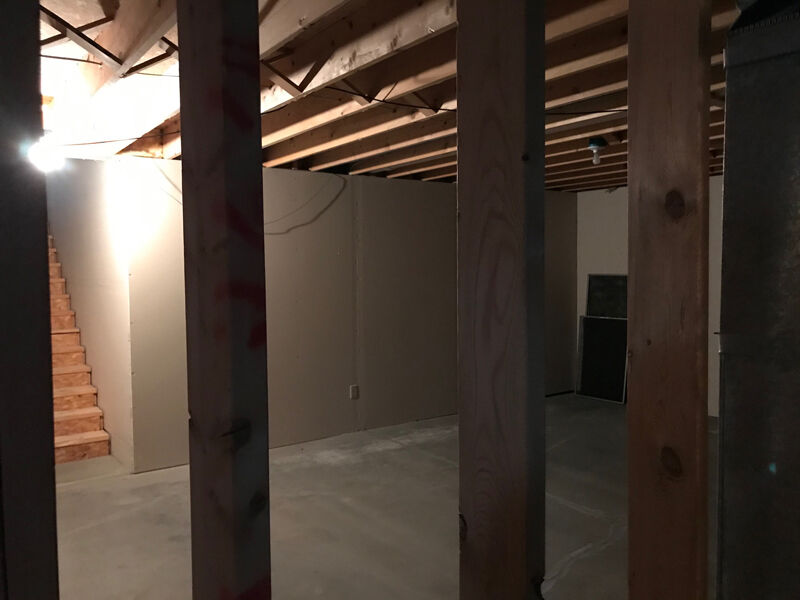 He found a house near Harvey Park in east Kearney and settled in.

However, he discovered his taxes were too high because there were problems with his property valuation.

“This is the first house I ever owned. I was concerned about the taxes. Nobody else around here seemed to be going through what I was going through,” O’Brien said.

Last year, O’Brien sought a more permanent fix. He invited the Buffalo County Assessor’s office to visit his home to verify the information on his valuation declaration. The in-person evaluation uncovered a significant error.

Assessor’s office documents said O’Brien’s basement was partially finished, but it was not.

Kearney realtor Matt Meister, who assisted O’Brien with his valuation protests and with the in-person evaluation, said the situation reveals a fundamental reality about the assessment process: Accuracy is essential for a fair property valuation.

“Going through the declarations page that the assessor’s office has on a home can be a very valuable way of correcting information,” Meister said. “In Father O’Brien’s case, they had the basement listed as partially finished, when in fact, there is zero finish in the basement. Until the county officials verified that fact, he (O’Brien) would have been assessed every year as though his basement was partially finished.

Meister learned the value of accuracy personally last year when he invited the assessor’s office to his house to verify the valuation declaration.

The visit paid off.

“During the visit, we discovered that the information the courthouse had on my house showed two fireplaces inside,” Meister said. “My house may have had a fireplace a long time ago, but there currently are no fireplaces in the house.”

Meister said correcting the declaration was worth the effort because it lowered his valuation by several thousand dollars. Also of importance, Meister said working with the assessor’s office means the correct information now is on file and will help ensure his future valuations are more accurate.

Working with the assessor’s office to correct errors yields a more permanent fix, but that’s not the case when property owners protest their valuations.

Rather than creating a more permanent correction, protests may lower valuations only temporarily. At the end of the year, the valuation reverts to the prior assessment.

Meister said the proof that the in-person verification worked arrived with the yellow postcard he received from the assessor’s office in May 2020. The mailing confirmed his valuation had gone down.

“Once the correction was made, the proposed valuation that came to me in May was lower than the preliminary valuation in the letter by several thousand dollars,” he said.

The “letter” Meister referred to is the notice of preliminary valuation the assessor’s office mails in January and early February.

Buffalo County Assessor Ethel Skinner said the notices are sent as a courtesy. In effect, the notices invite property owners to review the accuracy of their valuation declaration and contact her office to make corrections.

At the end of May the assessor’s office will mail property owners the yellow postcards with assessed valuations for 2021. Those valuations will have a key role in determining how much property tax will be owed by the owner to support public schools, city and county government and other governmental entities.

When they receive their yellow postcards, property owners have from June 1 to June 30 — the protest filing period — to get in line to contest their valuations.

All protests must be heard by July 25.

Skinner said her office mailed white envelopes with notices of preliminary valuations to 25,000 property owners. After the mailing, the assessor’s office worked with owners of 370 properties to update information on their declarations.

Skinner said correcting the information will be a more permanent fix for property owners who worked with her office, and it could help reduce the number of valuation protests that are heard.

“The majority of people who contacted us this year had some updating done,” Skinner said. She said owners who aren’t satisfied with their valuations after working on corrections with the assessor’s office still have the right to file a protest.

Reducing protest numbers has been a goal for Buffalo County, which was averaging 2,100 protests annually. That was consistently more protests than other Nebraska counties.

As a Realtor, Meister said he was “13 for 13” helping property owners lower their valuations last year. Meister agrees with Skinner that a valuation protest is not the best solution to a valuation problem. “The preliminary valuations were sent out so people could try to take care of things before May,” he said. “If you don’t like what you saw on the letter in January, it was your opportunity to do something about it.”

Skinner said property owners had until the end of February to contact her office to have their preliminary valuations reviewed. Assessors had until March 19 to certify their valuations to the state.

“We tried to accommodate as many people as we could and make changes where they were needed,” she said.

The assessor’s office staff of 10 includes 4½ peo p le who can review valuations on the county’s 25,000 properties: one reviewer each for agricultural and commercial properties and 2½ for residential. The office reviews properties, as required by law, on a six-year rotation. There may be from 3,000 to 4,500 properties to review, depending upon the year.

“Seriously, we can work with people anytime, but any updates made after March 19 will apply to next year’s values, not this year’s,” Skinner said.

- Jan. 15: Assessor provides notice of preliminary valuation. Property owners then can work with assessor’s office to review and update value determined for the current year.

- June 1: Assessor sends yellow postcard notices of valuation change to owners of property that had an increase or decrease in value.

- June 1-30: Individuals can file a personal property valuation protest with the county clerk.

- July 26-Aug. 24: Taxpayer may appeal Board of Equalization’s valuation protest decisions to the state’s Tax Equalization and Review Commission.

Search for missing crew to be suspended

Search for missing crew to be suspended

With 13 projects totaling $34.4 million on the city of Kearney’s to-do list this summer, residents and visitors will encounter new streets, park amenities and buildings taking shape in every corner of the town.

Father Donald O’Brien retired to Kearney six years ago, and soon after discovered problems with the assessed valuation of his house. He protested the valuation multiple times, but the final solution came with an in-person inspection by the Buffalo County Assessor’s office.

Even the long, narrow staircase to the basement is unfinished.