Solar array is on its way: Work begins on $11M Kearney project
0 comments
Share this
{{featured_button_text}}
1 of 5 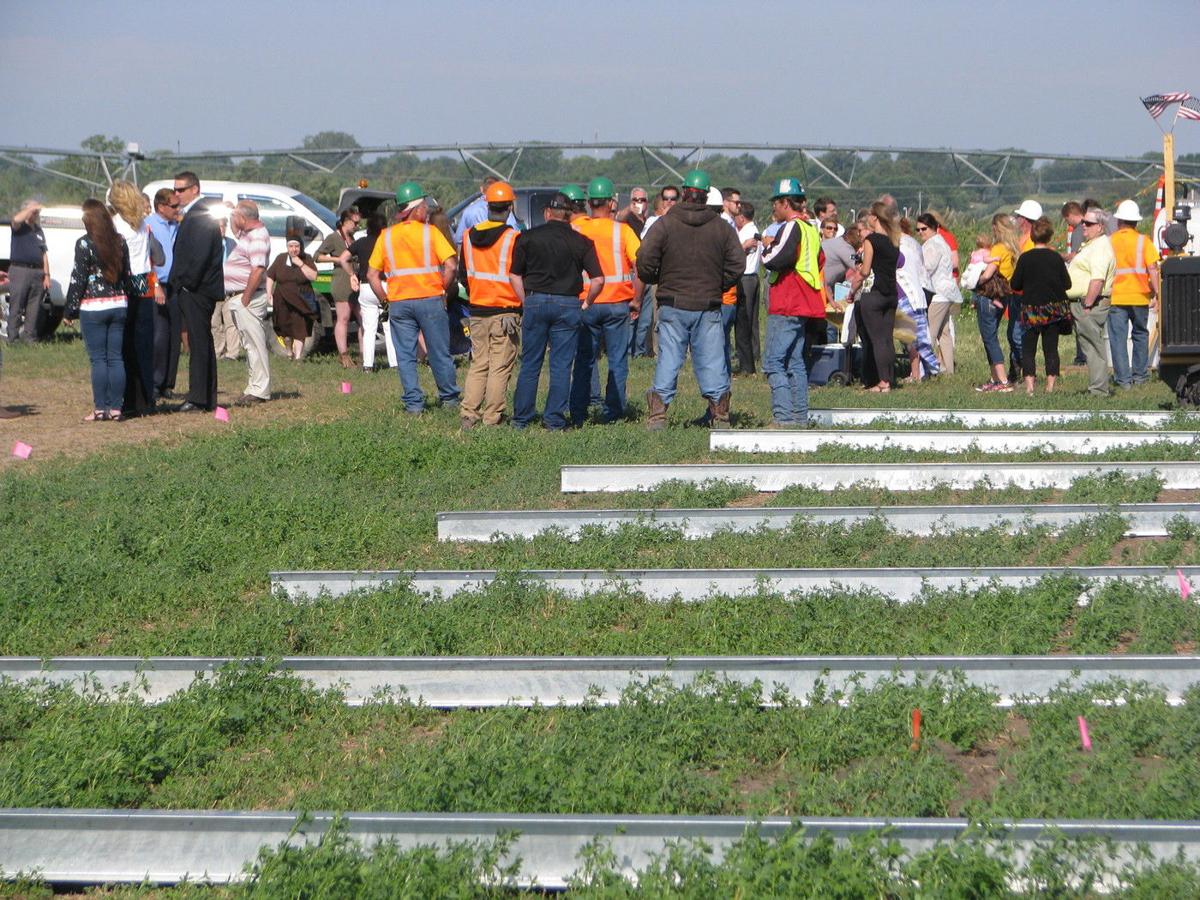 Some of the 4,500 metal piles that will hold the solar panels are laid out and ready to pile-drive into position after Tuesday’s groundbreaking for the $11 million solar array in northeast Kearney. When it’s finished, it will be Nebraska’s largest array. 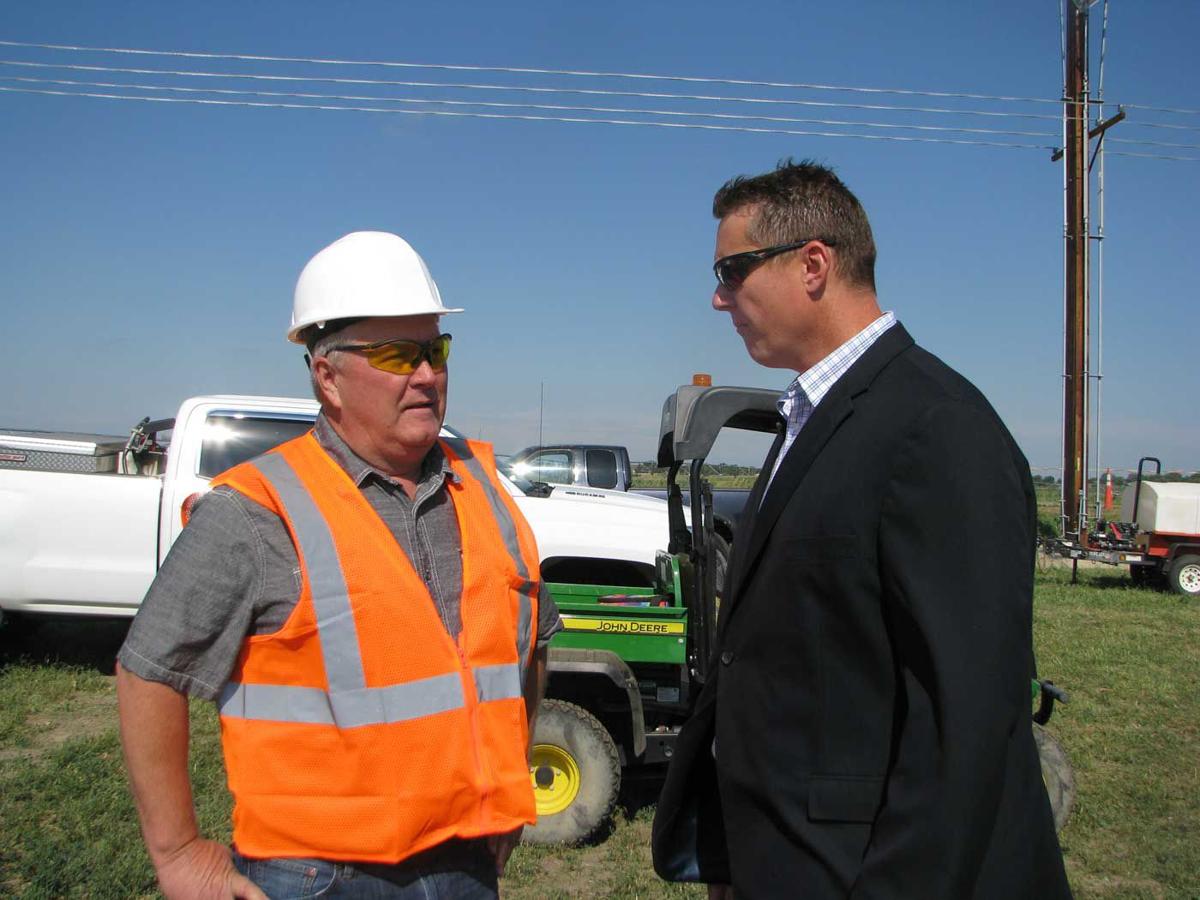 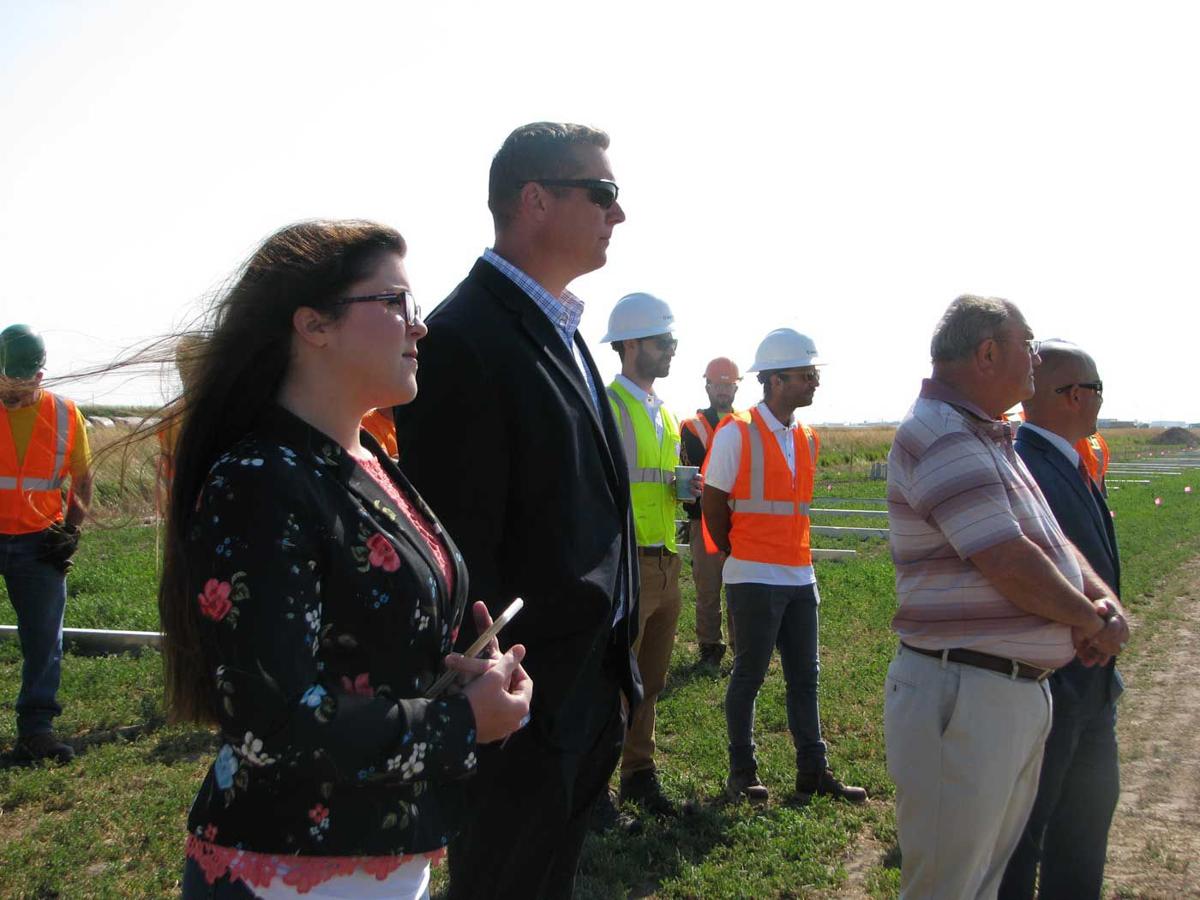 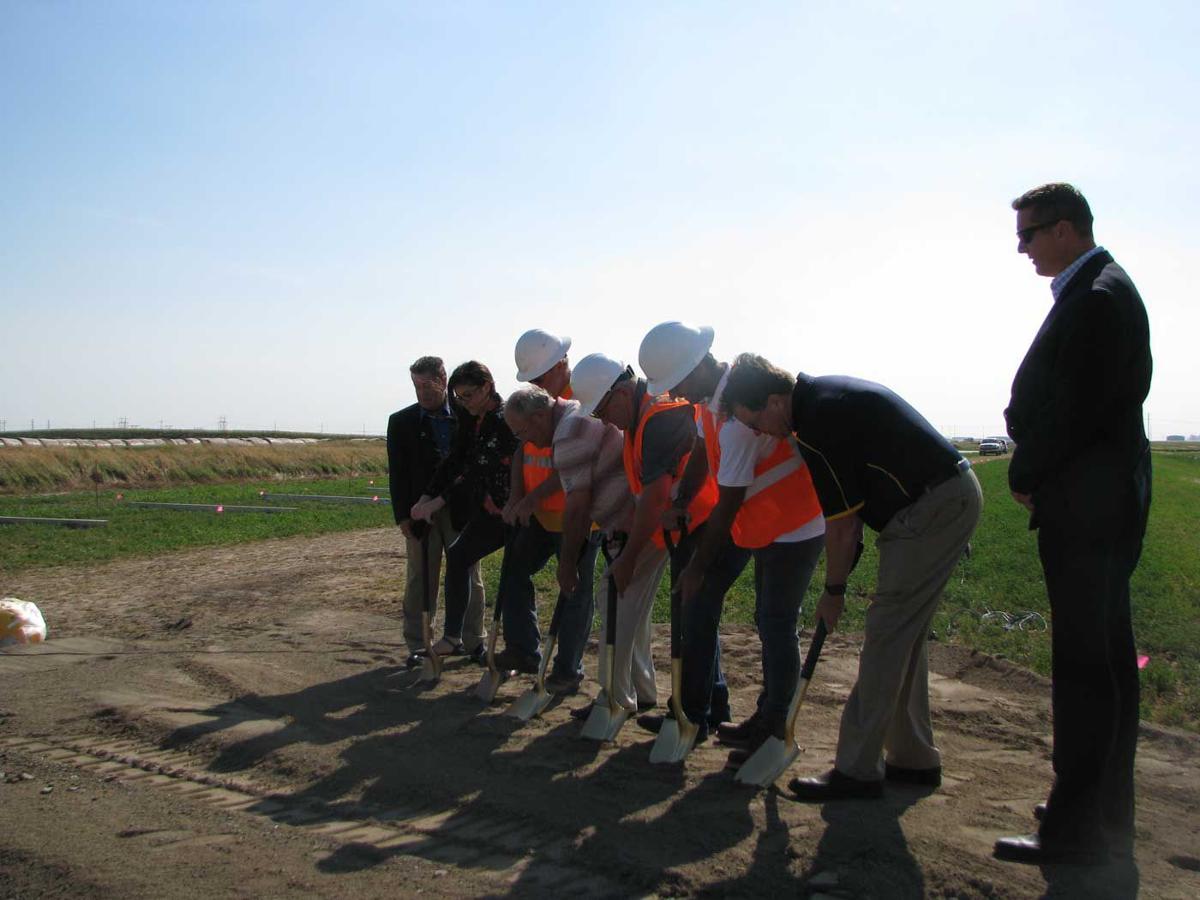 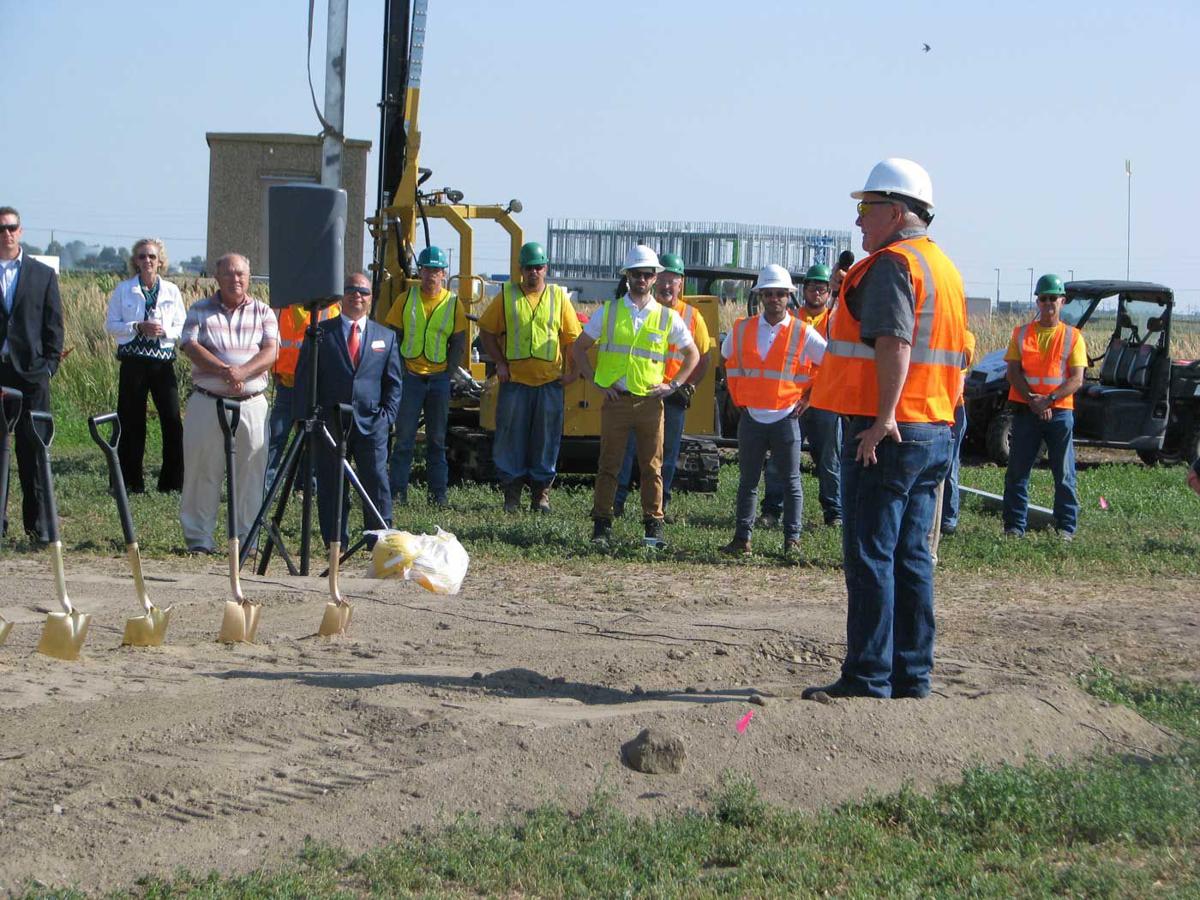 KEARNEY — Sometime in January, SoCore Energy will throw the switch and electrical power from 22,464 solar panels will begin flowing into Kearney.

But before that happens, there is work to do.

Representatives with the Chicago-based SoCore, which will own and operate the $11 million solar array, were present for the groundbreaking. Also present were representatives of the project’s general contractor, Interconnection Systems Inc. of Central City, and Kearney area municipal and economic development officials.

Immediately after gold-painted shovels turned the first scoops of soil, the first of 4,500 metal pillars was hammered home by a special mobile pile driver.

Interconnection Systems specializes in solar power and will be busy for several months pile driving the pillars into the 53-acre tract about one-half mile south of 56th Street and Antelope Avenue.

Mike Capalbo, who is in charge of all SoCore projects, said the Kearney site is close to ideal. The land is flat, the soil appears to be free of boulders or bedrock that can interfere with pile driving, and the sandy clay will contribute to the stability of the metal racks that will hold solar panels and wiring.

In addition to being SoCore’s largest solar array, the Kearney facility also will be the largest in Nebraska. The array will measure almost one-half mile long by 600 feet wide. Today, the 53 acres where the array is being built is dotted with 4,500 flags placed by Buffalo Surveying to mark where the pillars will be. Later in the construction, crews will install the 22,464 solar panels, which will be equipped to track the path of the sun for maximum generating efficiency.

Wayne Williams of Interconnection Systems said his crew will finish pillar installation in mid-November or earlier and then solar panels will be next.

“We should be done and gone by Nov. 15, maybe sooner than that,” Williams said.

Kearney Mayor Stan Clouse said during Tuesday’s groundbreaking that the large solar project demonstrates Kearney’s interest in new technology and protecting the environment. “We, as a community, are committed to green energy.”

SoCore will sell energy from the solar array to NPPD, which will sell the power to customers in the Kearney area. The 22,464 panels will generate about 5 percent of the electricity needed in Kearney. Clouse expects environmentally conscious business operators and home owners to be consumers of solar power. They’ll be able to buy it to fill part of their energy needs.

Clouse also said the presence of the large solar array will be a sign to data centers and other technology businesses that Kearney is the right place to be.

Kearney came close in its bid a few years ago for a $1 billion Facebook data center. An extremely low electrical rate was offered, but Facebook opted for an Iowa location because wind energy was part of the bid.

Some of the 4,500 metal piles that will hold the solar panels are laid out and ready to pile-drive into position after Tuesday’s groundbreaking for the $11 million solar array in northeast Kearney. When it’s finished, it will be Nebraska’s largest array.