On May 23, he’ll celebrate the 60th anniversary of his ordination.

On the walls of his home hang large framed pictures of significant moments in his priestly life: Entering seminary. Becoming a deacon. Being ordained. Serving the Eucharist to his kneeling mother.

O’Brien retired in Kearney in 2016 after serving churches in Grand Island, Shelton, Cozad, Gothenburg, Ainsworth and Scottsbluff. He taught school. He has worked as a hospital chaplain.

He has no complaints. He’d happily do it all over again.

Born on Sept. 4, 1935, in North Platte, O’Brien describes himself as “a Catholic down to my toenails.” His mother raised him and his sister as fervent Catholics. He went to Catholic schools.

O’Brien felt a stirring curiosity about the priesthood when he was at St. Patrick’s High School in North Platte. At a retreat, he shared those feelings with a priest. “The only way you’re going to know is to go to seminary and find out,” the priest told him.

O’Brien did just that.

His father was not a practicing Catholic, but, “he supported me. The day I left for the seminary, he took me down to the train station and said, ‘If it doesn’t work out, come home.”

O’Brien first served as a chaplain at St. Mary’s Hospital in North Platte. He then was assigned to Sidney as assistant priest at St. Patrick’s Church and as a teacher at the Catholic high school. “You did whatever you were told,” he said.

In 1961, he went to Eddyville and Amherst when the priest there was called into service during the Cuban missile crisis. “I thought it would just be a couple of months, but then it became 11 months, and I never got back to Sidney,” he said.

In Sept. 1, 1962, he was assigned to Grand Island as an assistant priest at St. Mary’s Cathedral and a teacher at Central Catholic High School.

In 1964, he began full time at Central Catholic, but he still celebrated Masses and more at the cathedral. In 1965, while still teaching religion, Latin and American history at Central Catholic, he was named the priest at Sacred Heart Church in Shelton. “Nobody asked. They told you what to do,” he said again.

Thus began a dizzying round of assignments. From Shelton, he was assigned to St. Pius X in Ainsworth for four years, 1968-72. He also taught at St. Mary’s High School in O’Neill.

From 1972 to 1981, he served St. Agnes Church in Scottsbluff and was superintendent of its grade school.

A year of turmoil

He had a problem with alcohol, and his bishop ordered him to go to a treatment facility for alcoholic priests in Pontiac, Mich. “The bishop told me to go. He cried, but I didn’t,” O’Brien said. He stayed for 90 days.

“The program was designed to make you realize you have a problem and face it. That changed my whole priesthood,” he said. “Alcoholism is a terrible disease, but I’ve been sober ever since, for 44 years.”

For a time after recovery, he celebrated the Eucharist with grape juice, not sacramental wine. He openly describes himself as a “recovering alcoholic.”

He said, “You walk the walk, and people are drawn to somebody who’s been there. I’ve done many, many thousands of footsteps.”

After that brief hiatus, his life’s work resumed. In 1981, he returned to Grand Island for an eight-year assignment as priest at Blessed Sacrament Church, chaplain at the Grand Island Veterans Home and an administrator at Central Catholic High School.

In 1989, he became the priest at Christ the King Catholic Church in Cozad and Our Lady of Good Counsel in Gothenburg. “All those years in Cozad and Gothenburg, I was content. They loved me, and I loved them. I still get Christmas cards from families who know me as ‘Father.’”

During that time, he drove back and forth to Grand Island to assist at the VA and offer spiritual assistance to those burdened by substance abuse. He found virtue in those long drives. He listened to tapes and had time to think. “It was a good time in my life. I think I did a lot of good there.”

He also has served on various diocesan committees, “including finance. I was good with finance.”

With the gentle urging of the Rev. Paul Colling at Prince of Peace Catholic Church, he bought a home in Kearney. O’Brien recalled, sorrowfully, his mother’s death at what was then Good Samaritan Hospital 51 years ago, “and Kearney left a bad taste in my mouth.” He had never served in Kearney, but he knew people here, so he gave it a chance. He has happily settled in.

“Kearney is a good city. During the pandemic, I got a chance to know Kearney,” he said.

O’Brien has barely slowed down. He has assisted at Catholic churches. He has led funerals for former parishioners in Cozad and Gothenburg. He celebrates Mass at CHI Health Good Samaritan, Mount Carmel Home Keens Memorial and elsewhere.

“I sleep well. I’m still busy in retirement, but I want to be busy,” he said.

O’Brien was ordained before Vatican II, when the priest celebrated Mass facing the altar, not the people, and did it in Latin, not English. “I love the participation of the laity in Mass now,” he added.

He remembers so many rural Nebraska parishes that were defined by ethnicity, such as heavily Irish churches, German Catholic churches or Polish churches.

“I’ve had a good life. I’ve been very blessed by God,” he said. “After 60 years, there’s a lot I treasure. I think back to so many places. People have always been so good to me. I got a lot more than I gave. I would do it all over again.” 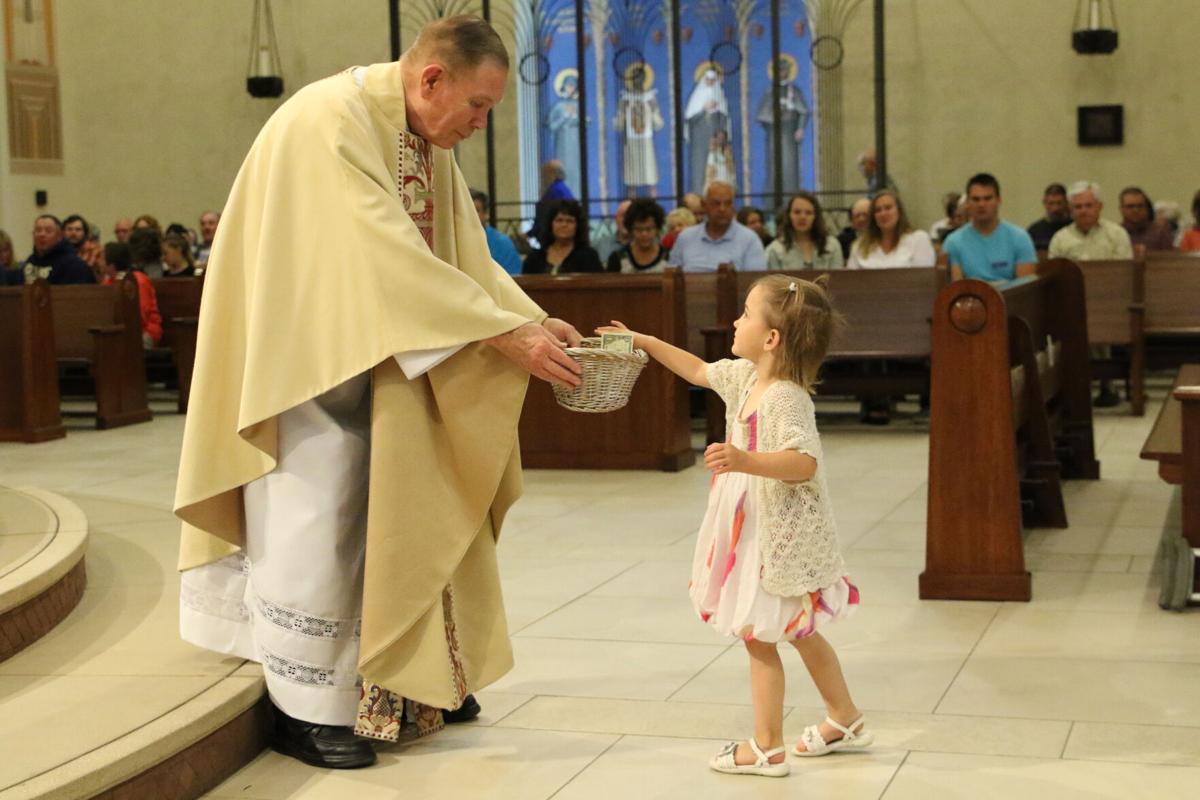 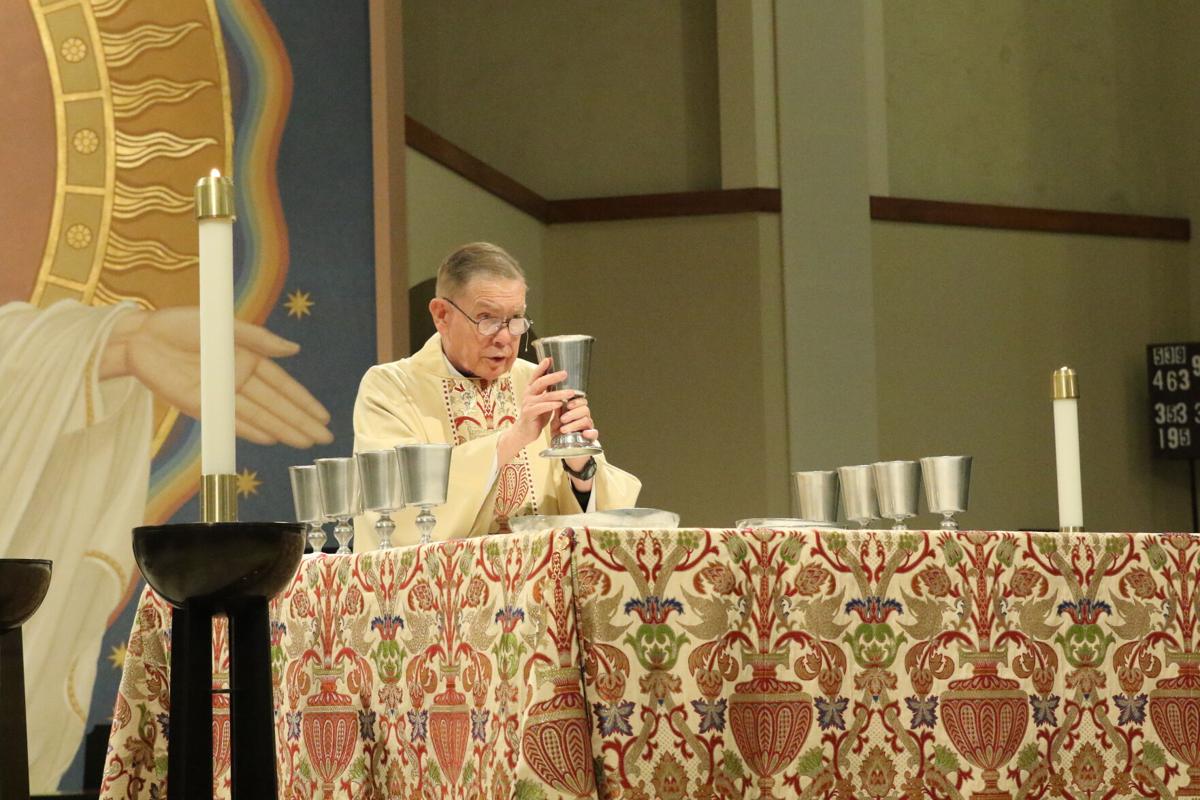 The Rev. Donald O’Brien has celebrated 30,000 Masses in his 60 years as a Roman Catholic priest. 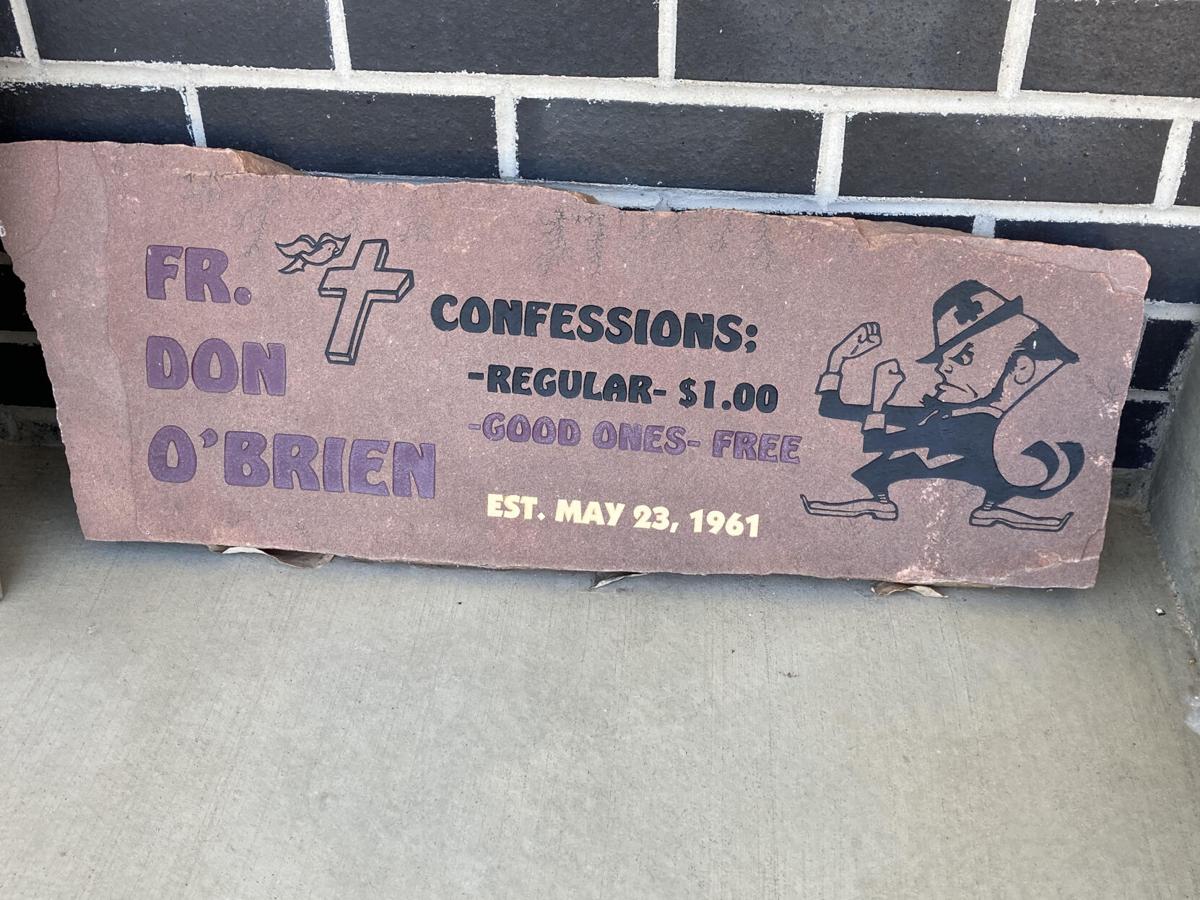 This humorous sign sits outside the front door of Father O’Brien’s home in Kearney. 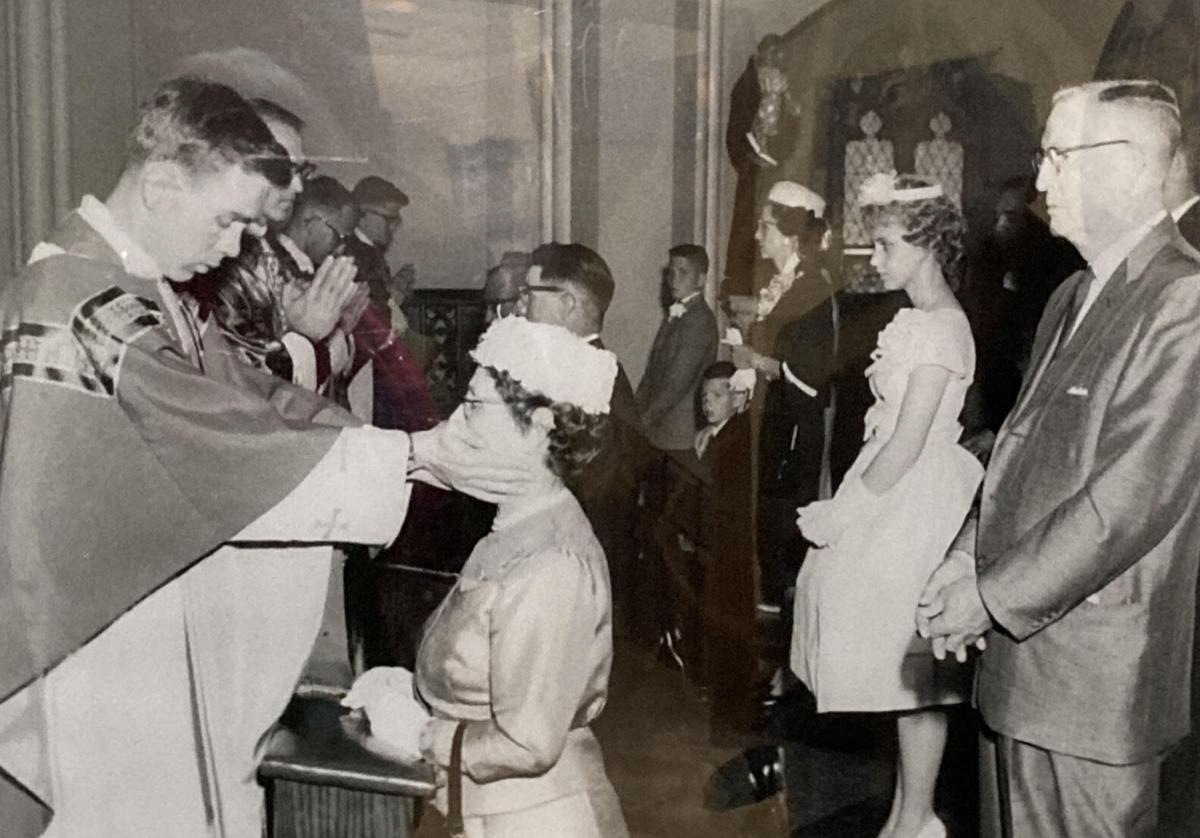 After his ordination, the Rev. Donald O’Brien, at left, gave his first blessing to his mother. His second blessing was given to his father, who waits at right.