One year after flood, Kearney businesses now dealing with another crisis: the pandemic
Share this
{{featured_button_text}}
1 of 3 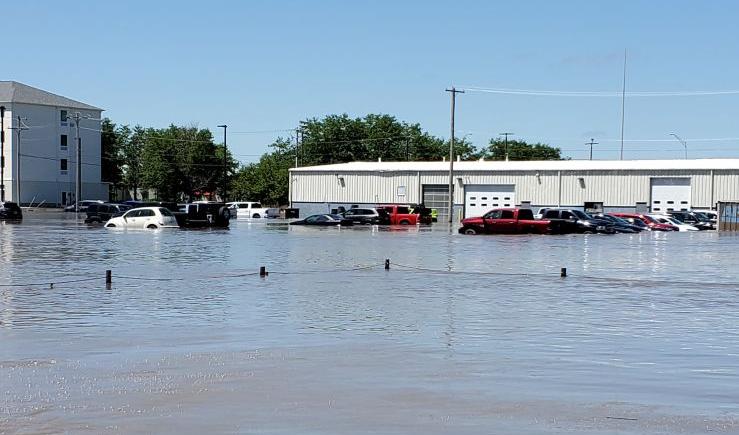 According to Midway Auto Dealerships General Manager Heath Phillips, Midway’s southernmost lot on Second Avenue was under “a couple feet of water” during the July 2019 flood. The water damaged 65 vehicles and the building on the property. 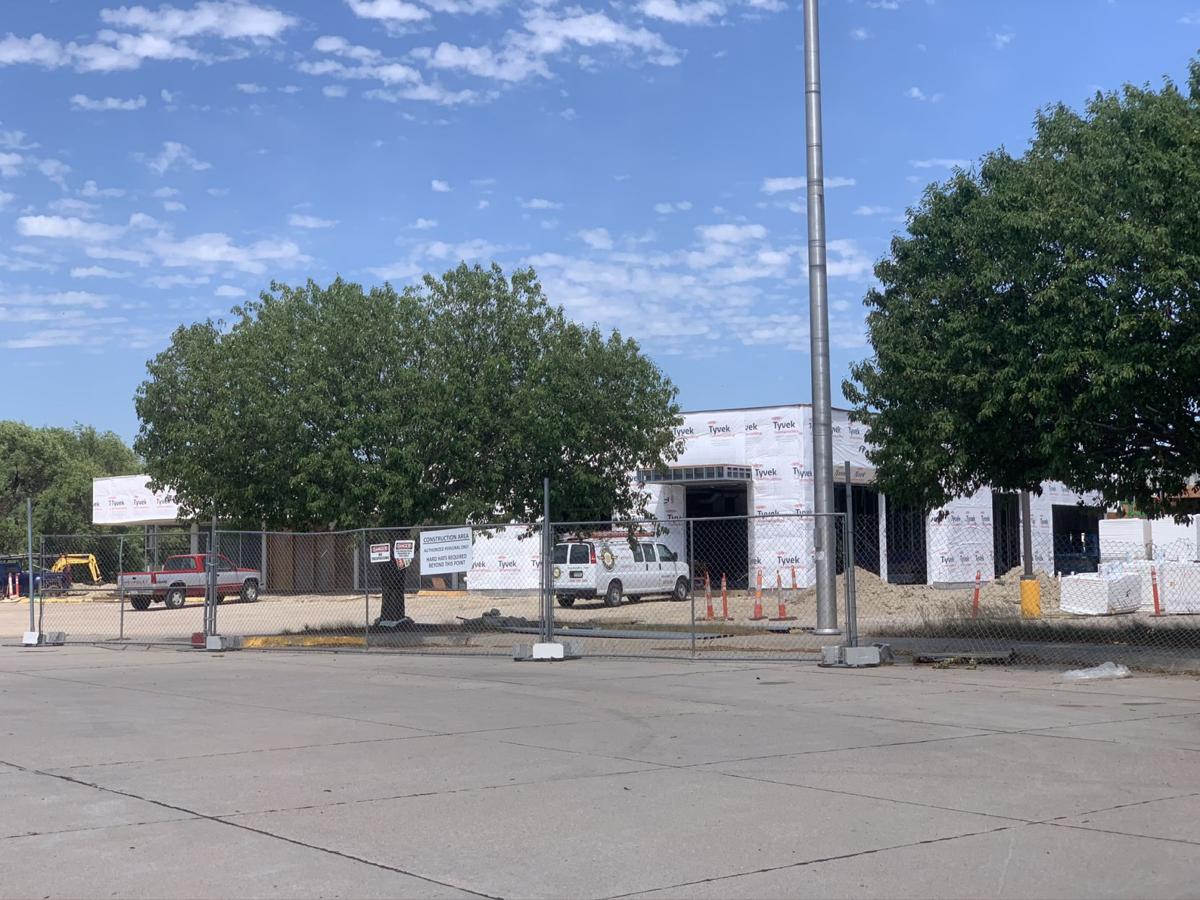 One year after the flood, Midway’s building is under construction. Inventory on the lot has been moved to Midway’s location on Central Avenue for now. Construction on the site is currently on schedule and should be completed by the end of this year. 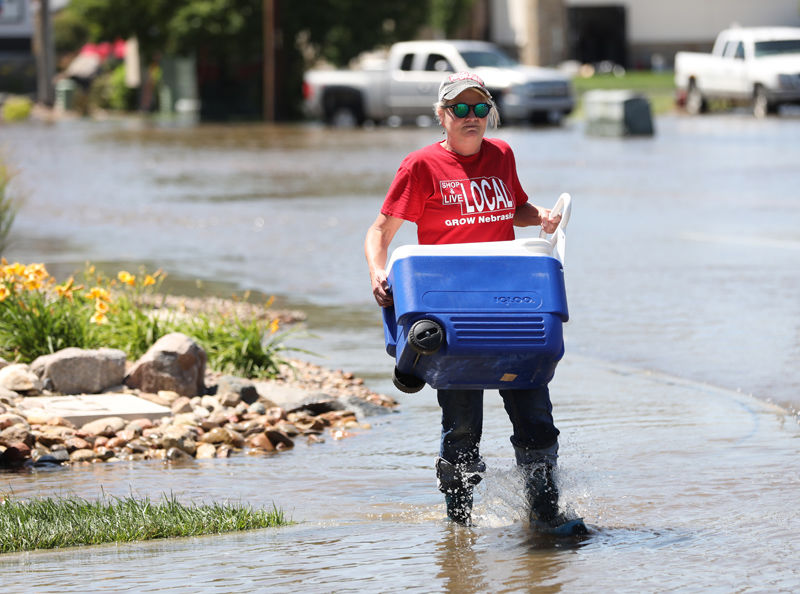 A woman wearing a t-shirt promoting Grow Nebraska, one of the businesses on Talmadge Street that experienced flooding in July 2019, walks along a water-covered sidewalk.

KEARNEY — Almost a year after floodwaters receded from south Kearney’s hotel district, many of those businesses find themselves still facing challenges with the coronavirus.

After the July 8 flood, more than half of the city’s 1,600 hotel and motel rooms were out of commission, according to Kearney Visitors Bureau Executive Director Roger Jasnoch.

Kearney Area Chamber of Commerce Director Derek Rusher said the office called about 100 businesses after the flood, which affected many south Kearney establishments, but also stretched up north to locations like Baer Photography.

Certain businesses bounced back more quickly from the flood than others, as with Midway Auto Dealership adapting to the loss of its southernmost lot within a day. Some hotel rooms, conversely, did not reopen until the beginning of 2020.

Today, one way or another, every Kearney business is feeling the effects of the coronavirus.

“The flood affected a very small geographic location in our community,” Jasnoch said. “If you were up at the mall, you didn’t realize there was a flood. With the pandemic, it’s obviously statewide, nationwide, worldwide.”

With much of the floodwaters emerging from Turkey Creek, buildings nearest to the creek in south Kearney found themselves under the most water. Many of those businesses were hotels.

“Generally, our hospitality district was the most affected for sure,” Rusher affirmed. Both large hotels, like those in the Younes family, and small motels, like Western Inn South, suffered.

By the beginning of 2020, Jasnoch said all of Kearney’s hotel rooms were open once again.

Even though rooms were available, travelers weren’t around to fill them.

“The difference between the flood and what we have right now is that with the flood, there was still a demand for rooms. So, when the rooms became rentable, they were rented,” Jasnoch said. “Now with the pandemic, we don’t have any demand.”

This April, loading and occupation tax receipts were down 80% compared with the same month in 2019, according to Jasnoch. These tax receipts are calculated 60 days after they are collected, so numbers for more recent months are not available yet.

Both these taxes fund the Kearney Visitors Bureau, Jasnoch explained, and the bureau is anticipating a 30%-35% impact on its budget for the fiscal year starting July 1. It also had to furlough two employees in charge of coordinating events the past few months because so many events have been canceled.

Conventions, which Jasnoch describes as the bureau’s “bread and butter” also have dried up.

“Before the flood and before the pandemic, we would average three conventions per day, per week, seven days a week ... That has come really to a standstill,” Jasnoch said. “It’s going to be a while before people feel comfortable being in groups, unfortunately.”

The virus’s effects extend into the fall. Jasnoch said the Buckle’s annual managers’ meeting scheduled for October has been canceled.

But he’s optimistic that the tide may be beginning to turn.

The Shrine Bowl will be held in Kearney this weekend, and the bureau is planning for a wrestling tournament scheduled for the beginning of August.

Amid the troubles, Rusher said that Kearney’s business community has been “resilient” through both of these crises.

“That’s the beauty of Kearney,” Rusher said. “If people didn’t know it, you found out how resilient our community is and how resilient our business owners are and how smart they are. Those decisions (during the flood) had to be made quickly and efficiently, and our business owners did that successfully. It’s pretty neat to see our community overcome that.”

The building at that lot was damaged, and so were 65 vehicles sitting on the lot. Though the inventory was covered by insurance, the deductibles on each still had to be met.

Midway was planning a remodel of the building in the near future, Phillips said, so they simply moved up the construction. Still underway, he said even through the pandemic, construction has remained on schedule.

Rusher said other businesses have taken the pandemic closures as an opportunity to renovate, as well.

According to Barista’s Daily Grind’s Facebook page, the coffee shop has been making improvements at both its locations. The shop off 24th Street is set to reopen Wednesday.

Other businesses have taken the downtime to focus on enhancing their social media presence and connecting with customers that way, Rusher added.

“It’s neat to see our chamber members and our businesses do those things to make their businesses better,” Rusher said. “Instead of saying poor me, they ask, ‘How do we improve?’ ‘How do we get better?’”

While revenue slowed at some establishments, Rusher said not all industries have been hurting the past few months. Some, like home and garden stores, are seeing a surge in business.

Kearney residents are continuing to turn out and support their local businesses, like restaurants.

Unfortunately, Kearneyites have a harder time supporting the tourism industry, whose patron base is built from out-of-towners.

Jasnoch knows progress on the tourism front will take time, and the transition won’t “happen overnight.”

He sees even small progress as encouraging.

“I think the silver lining is going to be one small group, one convention group, one wedding, one sporting event at a time. How you grow that is through social distancing, wearing your face masks, all the things the governor has been after the citizens of the state to do,” Jasnoch said. “That’s what it’s going to take to keep the pandemic from spiking like it has in other states.”

Photos: Looking back at the July 9, 2019 flood in Kearney

Hwy 30 closed due to flooding

Lake at Cunningham's on the Lake

Cunningham's on the Lake

One year ago: Anniversary coverage of the July 2019 flood

KEARNEY — Our water is safe to drink.

Paul Younes: Last year's flood was bad for hotels, but this year's pandemic 'is 10 times worse'

KEARNEY — On the evening of July 8, 2019, dark, angry clouds dumped torrents of rain northwest of Kearney. By midmorning on July 9, floodwater…

According to Midway Auto Dealerships General Manager Heath Phillips, Midway’s southernmost lot on Second Avenue was under “a couple feet of water” during the July 2019 flood. The water damaged 65 vehicles and the building on the property.

One year after the flood, Midway’s building is under construction. Inventory on the lot has been moved to Midway’s location on Central Avenue for now. Construction on the site is currently on schedule and should be completed by the end of this year.

A woman wearing a t-shirt promoting Grow Nebraska, one of the businesses on Talmadge Street that experienced flooding in July 2019, walks along a water-covered sidewalk.