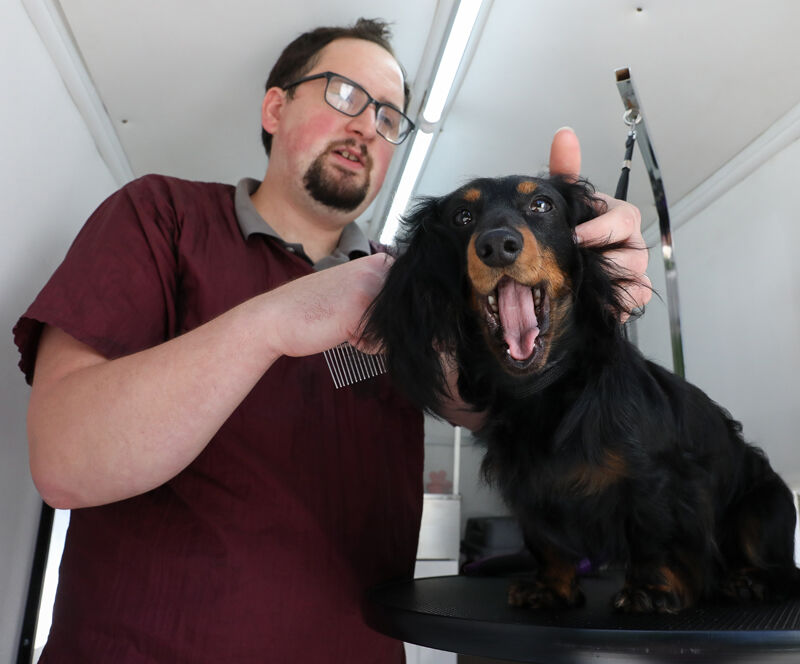 Mobile dog grooming owner Jacob Hajda combs through Burt’s hair in his new mobile dog grooming salon, Fetch the Groomer, which came to Kearney on Aug. 31. Hajda places the dogs on a table that elevates, lowers and spins so that he can easily groom them. 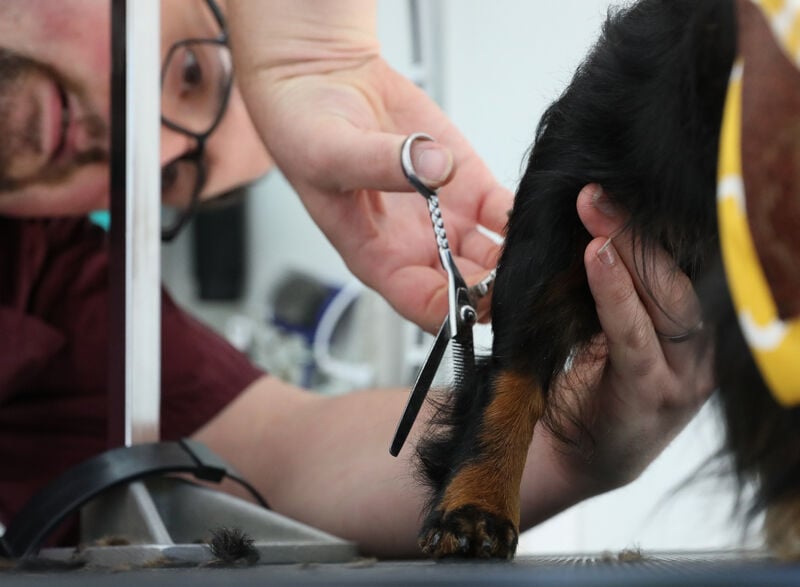 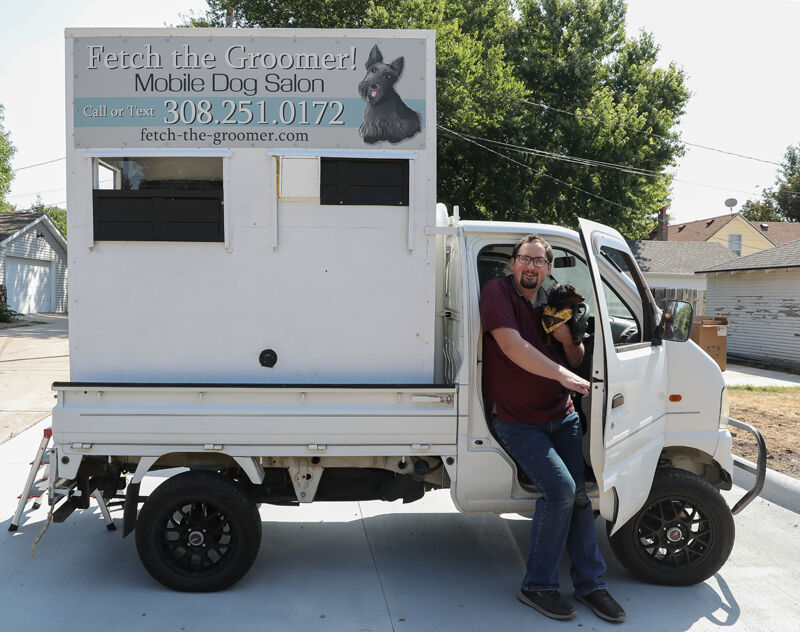 Jacob Hajda holds Burt from the driver’s side of his mobile dog grooming salon, Fetch the Groomer. The salon was converted from a hunting blind and is bolted down in the truck bed of a Suzuki Carry.

KEARNEY — A Broken Bow dog groomer has mobilized his business in Kearney where he offers his services in a tall, narrow trailer.

The trailer, which is 4 feet wide, 6 feet long and 6 feet, 2 inches in height, is just big enough for owner Jacob Hajda to bathe, dry and trim small dogs up to 25 pounds.

On Aug. 31, Hajda puttered down the road from Broken Bow to Kearney in a Suzuki Carry at 50 mph, the fastest he said his foreign, right-sided driving truck can travel.

Since then, Hajda has been on the go with his new mobile business, Fetch the Groomer. He travels within Kearney’s city limits with the converted aluminum hunting blind fastened to the truck bed.

“I can go to someone’s apartment complex, or if someone has a narrow driveway or lives on a tight street, I can turn around pretty easily,” he said.

Though small, the inside of the trailer works well for Hajda. It has a bathtub with water tanks that Hajda fills with warm water before his appointments. He also built storage for his tools and lithium ion batteries, which powers the tools.

Dogs will sit on a small round table in the center of the trailer while they are getting their hair blow-dried and cut, nails trimmed and ears cleaned. Hajda can raise, lower and spin the table to more easily groom the dogs.

Hajda said it’s important that he and his dogs are comfortable in the space. To add an extra level of comfort, he installed a window air conditioner and an attic vent.

“It helps pull moisture out when I’m bathing the dogs so it doesn’t turn into a little swamp in there,” he said. “And then I can also reverse it so I can suck in air from the outside.”

Four windows also let in air and light as needed.

In cooler months, Hajda will run a space heater. Foam insulation already preinstalled between the aluminum sides also will help keep the unit warm. Additionally, Hajda added insulation to the ceiling, and installed waterproof paneling on the walls, the bathtub back splash and a water-resistant linoleum floor.

Hajda also puts the pets at ease with his gentle demeanor and words of affirmation. At the end of the dog’s visit, Hajda rewards them with a handmade bandanna.

In Hajda’s 13 years of experience as a dog groomer, he has learned to read the dog’s mannerisms and react appropriately.

His experience comes from once owning The Dapper Dog in Broken Bow. Hajda’s parents helped him buy Kim’s Pet Boutique in 2007 when he was just 15 years old.

Before owning the business, he learned basic dog care in 4-H and did a business project about Kim’s Pet Boutique for the organization.

He said when he found out the business was being sold, he thought, “Oh, this is something I’m really interested in.”

The dog salon owner helped him learn basic grooming, dog handling techniques and how to best communicate with clients. But he also learned from books and traveled to trade shows across the country to garner more trade knowledge. Hajda entered several groomed dogs into competitions as well.

“Grooming and contests is a great way to prove your skills, at least it was for me because you get a nice critique from the judge,” he said.

In 2015, Hajda was ready for another line of artistic work — making gravestones. So he sold his storefront to work full time at Palmer Monument in Broken Bow.

He continued to groom dogs on Saturdays in a converted cargo trailer parked at his Broken Bow home, and he continues to do so to this day for special customers.

Eventually, his love of dogs called him to return full time to the grooming business.

“I decided I would prioritize grooming because I would rather be working with animals and their owners,” he said.

Hajda recently resigned from his monument-making job and decided to expand his grooming services to Kearney where he and his wife Rachel are more involved in church and community events. Hajda, Rachel and their 4-year-old daughter will continue to live in Broken Bow until Fetch the Groomer is established in Kearney, he said.

For now, his new truck and trailer are parked at an apartment he is renting with his sister at Fifth Avenue near Harmon Park. Hajda’s logo with a Scottie dog is attached to the side of his trailer, which acts as a billboard on the busy street.

When a client calls, Hajda asks if they have an electrical outlet in their garage or outside their home to power his vehicle. If not, he uses his battery packs, but those will run out of power after two grooming services and must be recharged.

Hajda hopes his new business will meet the needs of Kearney dog owners. He said the mobile salon is especially nice for people who can’t leave their home because of the coronavirus or because of work and family commitments.

Dogs can benefit from the mobile salon, too.

“Sometimes the dog benefits from being in a one-on-one environment with just the groomer instead of being in an atmosphere with other people and dogs, and they’re calmer,” he said.

Hajda also is glad to be back in the pet grooming business.

“It’s really gratifying to use your skills to make a dog look and feel their best and getting an anxious dog to trust you,” Hajda said. “You just build very special relationships with your dogs, and your customers’ dogs and your customers.”

The body of a male which was discovered floating in a sand and gravel pit south of Lexington has been identified by the Dawson County Sheriff’s Office.

As COVID-19 cases continue to climb, two Buffalo County residents — a man in his 70s and a woman in her 60s — and a Dawson County man in his 20s have died of the disease.

The third teen involved in the “senseless beating” of a Youth Rehabilitation and Treatment Center employee has been sent to prison.

Buffalo County had the majority of those new COVID-19 cases, with 22.

Mobile dog grooming owner Jacob Hajda combs through Burt’s hair in his new mobile dog grooming salon, Fetch the Groomer, which came to Kearney on Aug. 31. Hajda places the dogs on a table that elevates, lowers and spins so that he can easily groom them.

Jacob Hajda holds Burt from the driver’s side of his mobile dog grooming salon, Fetch the Groomer. The salon was converted from a hunting blind and is bolted down in the truck bed of a Suzuki Carry.