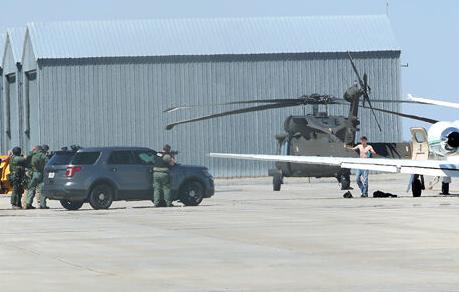 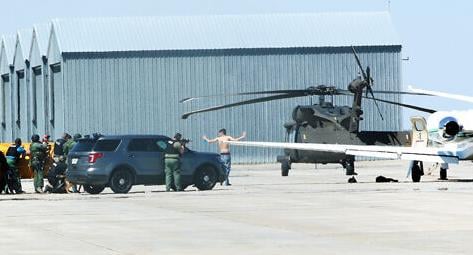 GRAND ISLAND - Tyler Caudill of Phillips allegedly tried to gain access to Kearney High School on Monday and then traveled to Central Nebraska Regional Airport on Tuesday and barricaded himself inside a private aircraft.

Grand Island police were called to the airport at 1:39 p.m. Tuesday. Officers were informed that a man had passed out in the back of a twin-engine jet, which was parked north of the air traffic control tower. A pilot discovered the man and saw a rifle and a bag.

The pilot took the AR-15 style rifle and bag out of the plane.

Police assumed they were dealing with a barricaded gunman, said GIPD Capt. Dean Elliott. The pilot thought there might be another weapon on the plane, but he wasn’t certain.

Police attempted to make contact with the 19-year-old Caudill. Officers called out to him on public address systems in their vehicles, but got no response. Eventually, police were able to communicate with him.

“We continued to try to negotiate with him. He refused to listen to us,” Elliott said.

During the two hours, the suspect may have been trying to take off, he said. It appeared that he was “manipulating the switches and the headsets and everything inside the cockpit.”

Caudill exited the plane and surrendered, with his hands up, at 3:12 p.m. after police fired chemical munitions through an open door. He was arrested by the department’s tactical response team.

A second gun was never found.

GRAND ISLAND - A 19-year-old Phillips man was arrested Tuesday afternoon after he allegedly barricaded himself inside a private jet at Central Nebraska Regional Airport.

During the two hours in which police communicated with Caudill, it appeared that he may have been trying to take off in the twin-engine jet, Elliott said.

According to a Kearney Police Department news release, Monday, Caudill of Phillips tried to open the secure doors of Kearney High School and was contacted by school staff in accordance with Kearney Public Schools secure entry protocol. He indicated he was there to visit a student, although he had no legitimate reason to be on school property.

He also wasn't listed as an authorized contact for the student, the release said, and was escorted from the school grounds.

Today, KPD received information from the Hamilton County Sheriff's Office that Caudill had taken a family vehicle and rifle from the home and his location was unknown. Due to Monday's incident at KHS, KPD notified the Kearney Public School district and KHS was placed in lockout while police tried to find Caudill.

KPD does not have charges related to this incident, the release said.