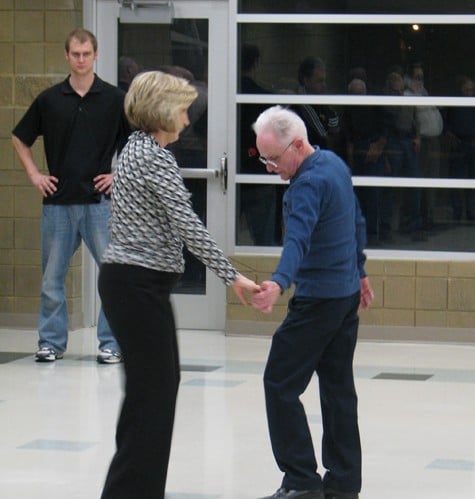 Phil Gough of Broken Bow and Darlene Poulson of Kearney exhibit the West Coast swing dance to class participants. Gough said his favorite dance is the Nightclub Two Step because “it’s a nice, smooth dance. It looks good when you’re doin’ it.” 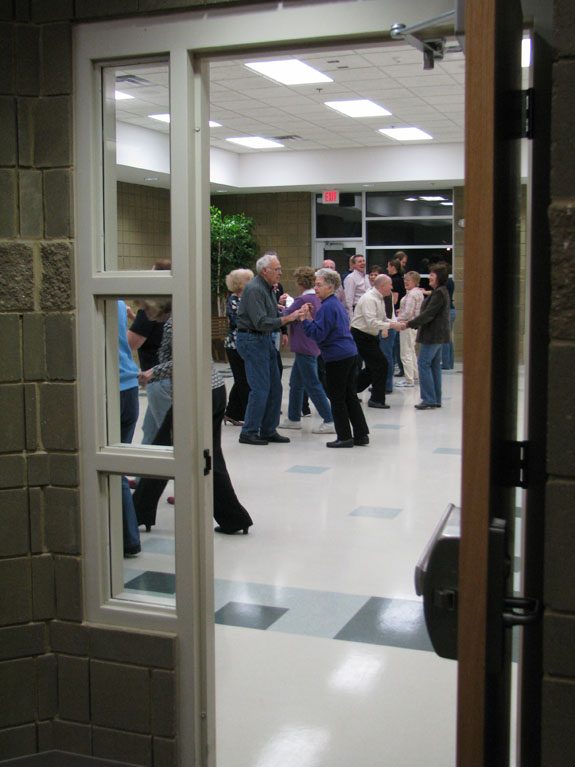 Four-week ballroom dance sessions are being offered through Kearney Park and Recreation from now until April 7 at the Harmon Park Activity Center.
By SARAH MULDER Hub Staff Writer

And even a pair of red boots.

The pairs of shoes were all different, but at the ballroom dance lesson classes offered through Kearney Park & Recreation, they were all dancing shoes.

The classes, taught by Phil Gough, are a progression of steps that teach dances from West Coast swing and cha-cha to the waltz and nightclub two-step.

Gough, who lives in Broken Bow, has been dancing for about 30 years and has about 20 years experience teaching dance.

Scott Hayden, Kearney Park and Recreation superintendent, said the department had offered ballroom dance lessons in the past, but then the instructor moved away. When Gough and his friend Darlene Poulson of Kearney came to Hayden with the idea, Hayden thought it was a good one.

“In the past several years it’s (ballroom dancing) gotten pretty popular, particularly on the West Coast. Of course with ‘Dancing with the Stars’ on TV, that heightens awareness, too — although that’s not quite what they’re doing now,” Hayden said with a chuckle.

As a West Coast swing dance class started, Gough separated the men from the women and promptly asked the men just what they were doing there. Some men laughed, others shuffled their lace-up dress shoes and athletic shoes with blue stripes and others pointed across the room to the women who brought them.

“She (Poulson) just taught me to do that Saturday night,” Gough joked.

Poulson, who has been dancing with Gough since October, said she has learned more about dancing from Gough in the last three months than she has in the last decade.

“What better way to do this than with a professional?” she said, recalling her longing to start dancing again last year.

“Me and Darlene go dancing around and down the street,” laughed Gough, noting they go to many dances in the area, including dances in Minden, Holdrege, Funk, Miller and the Eagles Club in Kearney.

During the class, Gough taught first the men and then the women a series of steps, showing everyone the correct foot to start on and the correct technique for holding hands during the dance — a technique Gough called the “puppy dog.”

A few class participants admitted to having been taught the West Coast swing dance before, while a few others had their eyes glued to the floor, watching their feet in dress shoes, tennis shoes and even that red pair of boots.

The red boot wearer, Lola Cornell of Gibbon, said she hadn’t been dancing in probably the last 10 years and wants to get back into dancing.

“I enjoy swing dancing and the waltz. The cha-cha’s kind of new,” she said. She plans to take all four sessions of ballroom dance, with other sessions being cha-cha, waltz and nightclub two-step.

Hayden said he hopes the ballroom dance classes will grow.

“It’s certainly a good form of exercise and a good social environment, as well.”

The Kearney Park and Recreation Department will accept registration for Ballroom Dance Lessons taught by Phil Gough up to three days prior to the class start date. Classes are from 7-9 p.m. Wednesdays at Harmon Park Activity Center.

Classes are open to teens and adults. Cost is $20 per person per four-week session.

Phil Gough of Broken Bow and Darlene Poulson of Kearney exhibit the West Coast swing dance to class participants. Gough said his favorite dance is the Nightclub Two Step because “it’s a nice, smooth dance. It looks good when you’re doin’ it.”

Four-week ballroom dance sessions are being offered through Kearney Park and Recreation from now until April 7 at the Harmon Park Activity Center.
© Copyright 2021 Kearney Hub, 13 East 22nd Street P.O. Box 1988 Kearney, NE | Terms of Use | Privacy Policy
Powered by BLOX Content Management System from TownNews.com.
You don't have any notifications.