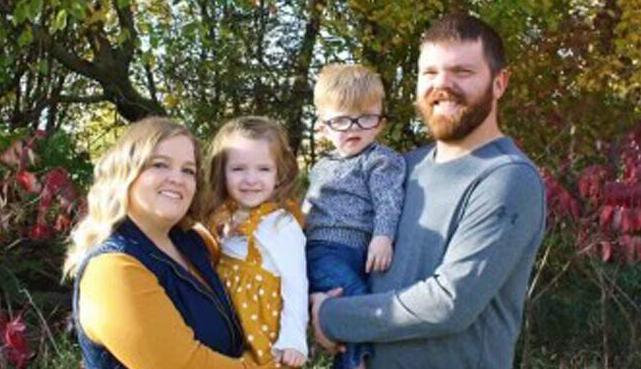 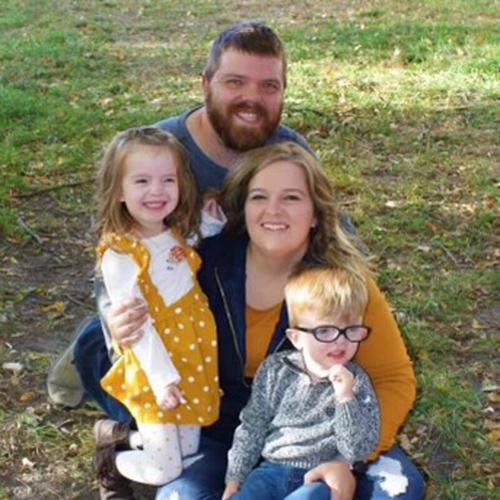 RAVENNA — Jason Busch had surgery April 19 to have a brain tumor removed. Two days later, his 4-year-old son underwent a surgery of his own.

Four-year-old Brayden quickly recovered from the operation on his skull, but his dad continues to work toward a full recovery.

Jason always has had headaches, but they became more intense and turned into migraines. He visited his primary doctor and received medication for the migraines, but nothing worked, said Christina Busch, Jason’s wife.

He started complaining about blurred vision along with intense headaches. It had been years since he visited an eye doctor, so Christina encouraged him to make an appointment.

“The eye doctor noticed some fluid behind his left eye and ordered an MRI right away. Fluid behind the eye can cause blindness if isn’t taken care of right away,” Christina explained. “A couple of days later he had an MRI at Kearney Regional. Within a couple hours, his primary doctor called us right back and said, ‘We need to see you right away. This isn’t good.’”

A tumor the size of a credit card was found in Jason’s brain. It was later diagnosed as a cancerous tumor called glioblastoma multiforme. Initially, he was told he had only one to two years to live.

The Buschs’ were referred to neurosurgeon Adeleke E. Badejo at CHI Health Good Samaritan in Kearney. Badejo wanted to see Jason immediately, and he gave the family some hope. He was determined to remove 100 percent of the tumor, and gave Jason a better prognosis.

At the same time, the couple’s son, Brayden, was scheduled to have surgery in Omaha for craniosynostosis. At three months old, Brayden was diagnosed with the disorder that caused his skull to fuse together prematurely.

He had surgery when he was 9 months old to open his skull, allowing his brain to grow. At an annual checkup in January, Brayden’s doctors saw that his forehead plate was overlapping his eye socket plate. He needed surgery to correct it.

Jason underwent a seven-hour surgery to remove the tumor, and Badejo was confident that it was all removed. Two days later, Brayden underwent surgery in Omaha. While Brayden bounced back quickly after his surgery, Jason has a much harder road to travel.

A benefit poker run to assist the Busch family will take place Saturday beginning at Chug A Lug Sports Bar in Kearney. Registration is from 10-10:45 a.m. at Chug A Lug. Kickstands are up at 11 a.m. All vehicles are welcome.

Participants will stop in Gibbon, Cairo, Rockville and Ravenna. The cost is $15 a hand or two hands for $20. There will be a silent auction, 50/50 drawing and meal following the run in Ravenna.

Immediately following his surgery, Jason was unable to talk and could only move his left hand to touch his face. He also has experienced short-term memory loss.

“With that size (of tumor) and on that side of the brain, those are the side effects. We had known that Jason might not be able to ever talk or walk. It was a possibility,” said Christina.

He was hospitalized in Kearney for three weeks before being transferred to Madonna Rehabilitation Hospital in Lincoln. Jason stayed at Madonna for about two weeks where he was regained his speech and was starting to walk when insurance denied his stay at Madonna.

He returned home two weeks ago, and he has continued to do physical therapy, occupational therapy and speech therapy through home health care.

“We have seen great improvement even from being at home. Last week, with a walker he walked 15 feet and had hardly any support,” Christina said.

Badejo expects Jason to make a full recovery, but they aren’t sure how long it will take. Along with multiple therapies, Jason will do six weeks of radiation and one year of a mild chemotherapy medication in case any microscopic pieces of the tumor remain in his brain.

Christina, Brayden and the couple’s daughter, Brooke, 5, were able to visit Jason while he was in Lincoln, but they are glad to be reunited at home.

Jason is a warehouse manager for Holmes Plumbing and Heating Co. in Kearney. The company has been supportive and are ready for Jason to return. Not being able to work or help his family at home has been a struggle for Jason.

“He’s a very hard worker. It is very hard for him to not get up and do things. That is his biggest struggle when he sees me doing everything at once, and he wants to help,” Christina said.

Jason’s parents are able to be with Jason when Christina works, and the communities of Gibbon and Ravenna have come together to help the family with various fundraisers.

“We had some fundraiser accounts at a bank in Gibbon and one in Ravenna for this. It was just amazing how both the small towns came together and could donate as they could,” Christina said.

Accounts for the Busch family are set up at Gibbon Exchange Bank and Town and Country Bank in Ravenna.

Although the lobby is ready for action, some major elements of the theater still need attention.

Check out a complete listing of events in the area.

HOLDREGE — When Frank and Bruce Hilsabeck sold their sporting goods store to Brad Schneider in 1988, they told the new owner they would help h…

Man wanted for questioning in vehicle thefts in north Kearney

In each instance the vehicles were either parked on the street or in private driveways, and were unlocked.

“Nebraskans made their voices heard loud and clear,” Flood said Tuesday night during his election night party at the Midtown Event Center in Norfolk.

A network server issue has caused delays and connectivity issues for The Independent customers.

Cause of Minden house fire that killed three dogs under investigation

Troopers placed 21 vehicles and three drivers out of service.