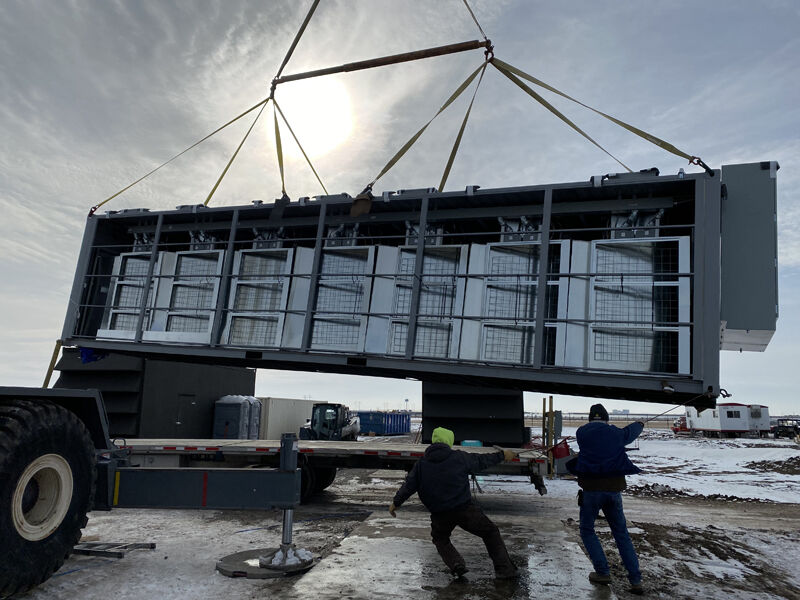 Construction of the $7.65 million Compute North data center began in August 2019 at Kearney’s Tech oNE Crossing tech park. Computer units in the data center are arranged in rows and consume the equivalent of 20% of Kearney’s electrical demand to operate computers and keep them cool. 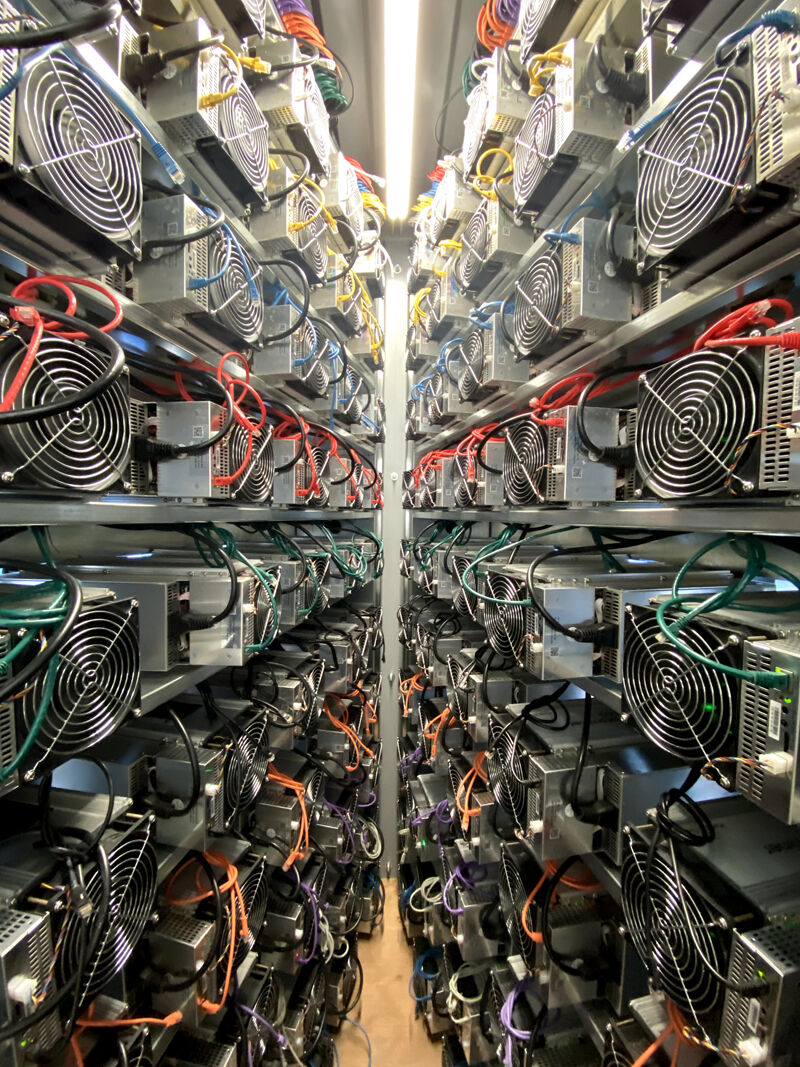 Compute North’s data center occupies part of a five-acre tract in Kearney’s tech park. The data center announced today it is tripling its computer power to accommodate its expanding customer base.

KEARNEY — Compute North launched its data center at the city of Kearney’s TechoNE Crossing in August 2019 with massively powerful computers to perform a variety of functions, including blockchain technology, cryptocurrency, artificial intelligence and machine learning.

Among the data center’s current customers are cryptocurrency traders, but in just a few years, the facility’s computing power could play a role in development of autonomous cars, said Marshall Johnson, president of Compute North.

Johnson’s company announced today it plans to triple the computing power of its Kearney facility.

In 2019 plans for the five-acre complex were to build a $7.65 million facility that would consume about 20 megawatts of energy. That’s about equal to 20% of Kearney’s electrical demand.

With today’s announcement, the company based in Eden Prairie, Minn., will be expanding its facility by an additional 70 megawatts of infrastructure, or about three times the original 20-megawatt power demand.

Johnson is not disclosing how much Computer North will pay for the expansion, but said, “we’re more than doubling our investment in the whole Kearney community.”

He said the pandemic economy is contributing to Compute North’s growth, and that his company is working hard so it can continue growing after the crisis.

The three-fold jump in electrical demand will mean a substantial increase in computing power, said another executive of the Minnesota company.

Perrill added, “We’re excited for the growth that our site expansion will bring to the local economy.”

Compute North also credited Nebraska Public Power District for its track record for reliability, for its diverse renewable power blend and for its willingness to answer the data center’s power demands.

“NPPD is pleased to see Compute North grow in Kearney, where they can take advantage of our low costs and reliable service,” said Tom Kent, NPPD’s president and CEO. “We, too, look forward to working with Compute North in meeting their needs for renewable energy, while also looking at how we can both benefit from their flexible demand for power.”

NPPD is expanding its substation at TechoNE Crossing to accommodate the Compute North expansion, Kearney Mayor Stan Clouse said. Clouse is an account manager for NPPD.

Darren Robinson, president of the Economic Development Council of Buffalo County, said projects like Compute North’s are a result of “quality partnerships. I am thankful for the leadership and support from Compute North, the city of Kearney, Nebraska Public Power District, the EDC of Buffalo County Board of Directors and the Nebraska Department of Economic Development.”

Clouse said the data center’s expansion is a win for all: Compute North gets reliability and favorable electric rates; NPPD can sell some of its excess capacity; and the electricity sales will produce some revenue for the city.

“The lease revenue we generate will be several hundred thousand dollars,” Clouse said. The city of Kearney owns the power lines and equipment NPPD uses to deliver electricity in Kearney, so the utility pays a lease fee to the city. It amounts to millions of dollars per year.

The Kearney data center is unique in the data center universe because Compute North can boost computing power by adding more computing units.

Compute North’s complex at TechoNE Crossing near 56th Street and Antelope Avenue looks more like an electrical substation than a battery of massive computers.

Unlike the mammoth data centers that cover entire city blocks, cost hundreds of millions to build and only store information, the Kearney data center is among the first of its kind and it’s powerful computers are workhorses.

According to today’s announcement, a building will be built on Compute North’s five-acre tract to accommodate additional office space, equipment storage, and on-site maintenance and repair equipment. Compute North currently employs six at its TechoNE facility. That number will grow as business expands, Johnson said.

According to a press release, the Labor Department’s Wage and Hour Division found the restaurant wrongly classified workers as exempt from overtime, when they were not.

While friends, church members and family have offered immeasurable help, David Salyer has had to face the tragedy alone.

Quinn’s defense counsel made a motion for a mistrial based on U.S. Sen. Ben Sasse’s statements made about the case on Monday.

Firefighters from Gibbon, Elm Creek and Pleasanton also responded to the scene for mutual aid.

The downtown concert series sponsored by McCue’s Nebraska Taproom and Kitt’s Kitchen and Coffee will require some downtown streets to close.

The semi, driven by Steven Fries, 63, of Upland took evasive action and went into the west ditch where it rolled.

A major street projects is nearing completion on 31st Street from Avenues D to G, while the layout of a $1.5 million botanical garden is beginning to take shape at Yanney Park in southwest Kearney.

Construction of the $7.65 million Compute North data center began in August 2019 at Kearney’s Tech oNE Crossing tech park. Computer units in the data center are arranged in rows and consume the equivalent of 20% of Kearney’s electrical demand to operate computers and keep them cool.

Compute North’s data center occupies part of a five-acre tract in Kearney’s tech park. The data center announced today it is tripling its computer power to accommodate its expanding customer base.