'It was like a river out here': Odessa, hard hit by floods, starts cleaning up from catastrophe
Share this
{{featured_button_text}}
1 of 2 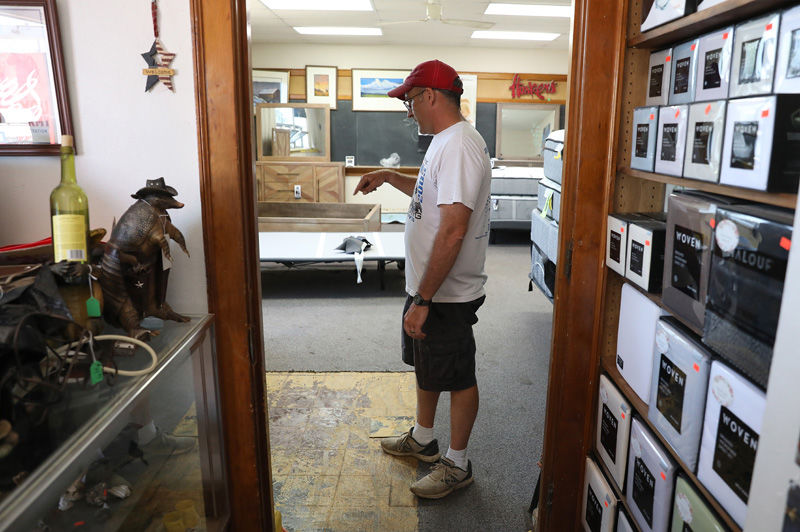 Odessa Furniture owner Lucuas Gerdes points at the floor in one of his sho rooms where he ripped out carpet Wednesday afternoon. The first floor of his building, the old Odessa schoolhouse, was filled with a quarter inch of water Tuesday after heavy rain dumped on the region. 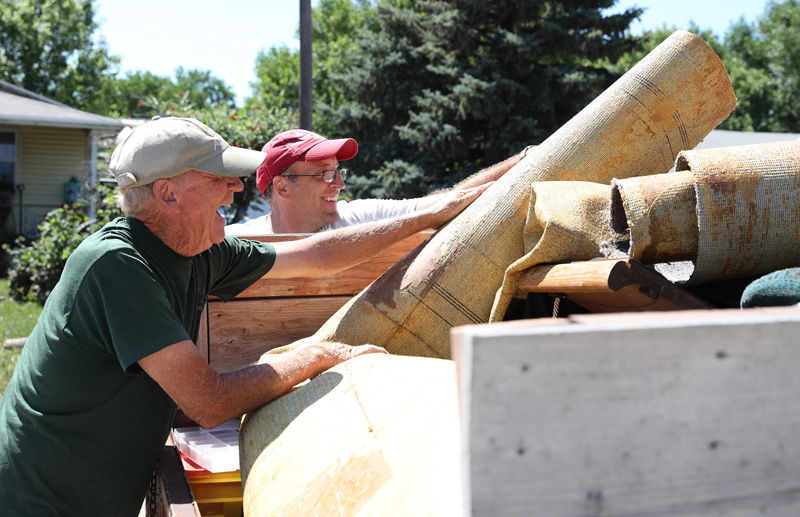 ODESSA — Bev Refior woke to thunder and lightning at about 3 a.m. Tuesday to see water and her neighbor’s boat flowing down her Odessa street.

When the rain had subsided, Refior said her street, Webb Street on the north side of Highway 30, was filled with four feet of water.

The water nearly reached Refior’s front porch. It seeped into her garage and moved her son’s refrigerator, washer and dryer, which were stored in the garage. The floodwater also filled her crawl space and almost submerged her air-conditioning unit and 2004 Pontiac Grand Am, which was parked in her driveway.

“It went up into my trunk, glove box, everything,” Refior described how water inundated her car.

Fortunately, Refior had fully insured her car and it can be replaced.

The water, which ran from north to south, carried away telephone poles Refior stored in her backyard and the neighbor’s boat and pallets and Refior’s new planter with marigolds. The boat, telephone poles and pallets ended in the Odessa Furniture fence line along Highway 30. Refior doesn’t know what happened to her planter.

Across the street from Refior’s house, the Gerdeses vacuumed out a quarter of an inch of water from the first floor of their furniture and antique store, Odessa Furniture.

“It was like a river out here yesterday,” said Becky Gerdes, mother of Odessa Furniture owner Lucuas Gerdes. “We had our flood boots on all day.”

Becky and her husband, Dallas, are helping their son clean his business. Becky gathered antiques at the front counter of the store Wednesday afternoon, while Dallas and Lucuas moved furniture and ripped up the carpet. All the while, they were pumping five to six feet of water from the basement with a sump pump and a garden hose.

The store, which is in the old Odessa schoolhouse, smelled musty and damp on Wednesday. But Lucuas said most of his retail was spared in the flood. His beds sat high enough on their frames and the furniture had plastic pieces on the bottom of their legs to where the water couldn’t damage them. Furniture in the old gymnasium was untouched because the water only seeped around the edges of the floor, Becky said.

Items that sat low enough on shelves — $1,500 worth of pillows and a few sheet-sets — were damaged in the flood. Additionally, any items that were stored in the basement, including Lucuas’s personal Christmas tree, are not salvageable.

“Oh, my wife’s going to kill me when she realizes the Christmas tree is down there,” he said.

Other losses in the basement include furnaces and a new water heater that Lucuas had purchased in November. He doesn’t have flood insurance.

The business will survive, Lucuas said, but the flood isn’t “desirable.”

Though he is replacing carpet and will soon repaint, Lucuas said he still is open for business.

“I’m not going to steer away somebody wanting to buy something,” he said.

Becky added with a chuckle, “They can walk around us.”

Back across the street, Bev was waiting for her son to get off work to help her drain 1½ feet of water from her crawl space.

Bev, who was born and raised in Odessa, said she has lived in her house for 40 years. She said never before had she seen water come into the town like it had on Tuesday.

She hopes her town can get a little relief after a wet spring and summer.

“I just pray to God it stops raining for a while. I’m tired of it,” she said.

HOLDREGE — With the unprecedented flooding across Phelps County and central Nebraska, the Phelps County Community Foundation has opened the Di…

KEARNEY — The Kearney Area Solid Waste Landfill is extending operational hours this weekend, according to an announcement from the city of Kearney.

Nebraska DHHS offering economic assistance for those affected by flooding

LINCOLN — The Department of Health and Human Services is offering assistance for individuals who lose, or may lose, income as a result of the …

LEXINGTON — It may be harvest time before the full extent of flood damage to south-central Nebraska crops is known.

Photos: Odessa the day after the flood

Odessa Furniture owner Lucuas Gerdes points at the floor in one of his sho rooms where he ripped out carpet Wednesday afternoon. The first floor of his building, the old Odessa schoolhouse, was filled with a quarter inch of water Tuesday after heavy rain dumped on the region.