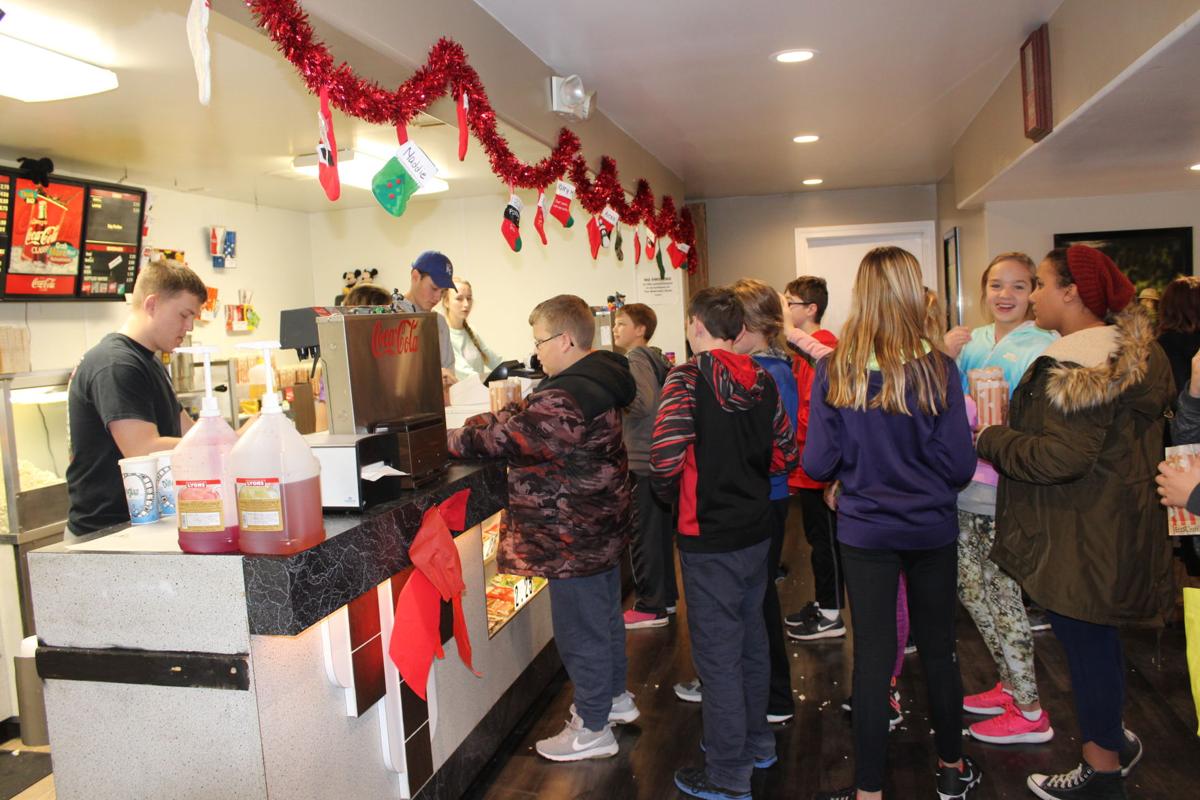 A line of Holdrege Middle School students waits to receive popcorn and drinks Wednesday at the Holdrege Sun Theatre. The students saw the film “Wonder” after the group, All About Kindness, raised $2,000 to see the film. The group organized in October, and its goal is for the school to have a culture of kindness. 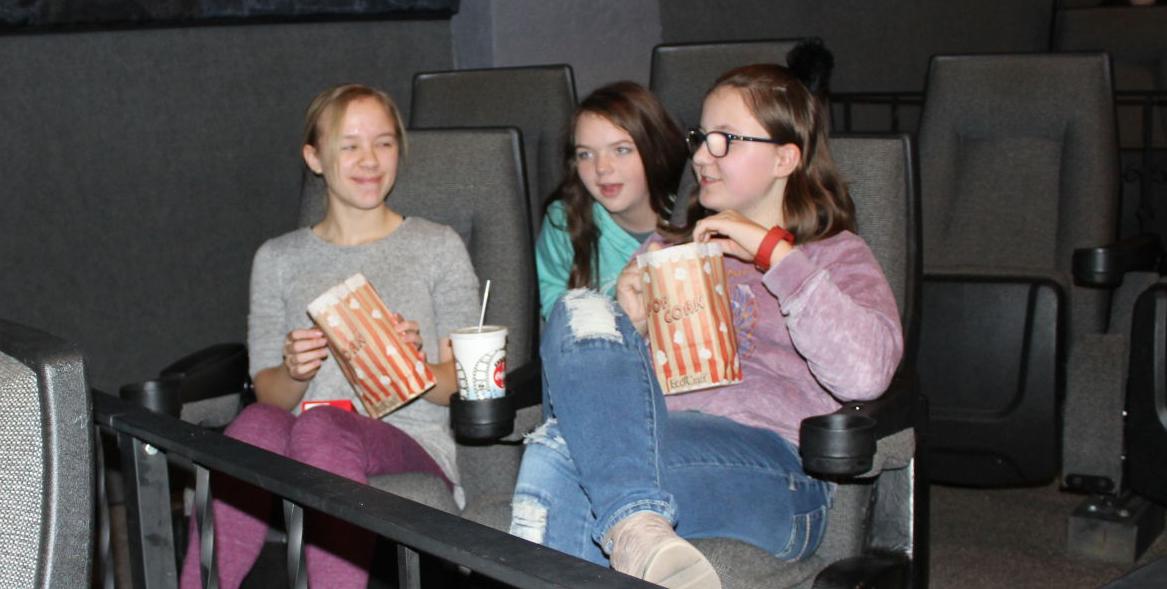 From left, Kendra Herbeck, 13; Isabelle Vap, 13; and Alexis Gill, 12, settle into their seats Wednesday to view “Wonder” at the Holdrege Sun Theatre. The Holdrege Middle School students were able to see the film after the group, All About Kindness, raised money for the entire school to go to the movie and enjoy free popcorn. Herbeck is the daughter of Misty and Kent Herbeck, Vap is the daughter of Josh and Sally Vap, and Gill is the daughter of Ryan and Allison Fritsche.

HOLDREGE — When Holdrege Middle School’s All About Kindness group began two months ago, the members weren’t expecting it to make as big of an impact as it has in such a short time.

After raising money through a gift basket drawing and donations, the new organization was able to bring in $2,000 in order for all fifth- through eighth-grade students and most of the staff and faculty to see the movie “Wonder.”

When four students, Mallory Pfeifer, Ava Wells, McKaden Smith and Breck Miller, attended the Digital Citizenship Symposium in September in Kearney, they were inspired to be a force for change at their school.

“They just taught us how to be kind online and be aware of everything,” said Wells, a seventh grader and the daughter of Rachel and Ryan Wells.

Students at the conference heard from Dr. Mark and Joni Adler from Ralston Public Schools, whose 15-year-old son, Reid, was the victim of online bullying and committed suicide in 2016. The most popular apps the students in the All About Kindness Group use are Snapchat and Instagram. They have all seen some form of bullying on social media.

“We had an opportunity at the end to kind of sit down together just as our school and talk about, ‘Now what?’ And that’s where the group kind of then started,” said Renelle Hartzog, eighth-grade language arts teacher at Holdrege.

Members of the group said physical bullying isn’t a big problem at their school, but they don’t know anyone who hasn’t experienced verbal bullying.

“It happens everywhere. I don’t think you ever go to a school and be like, ‘This school is completely perfect,’” Wells said.

“People say things, and they don’t think of the after effects, the repercussions that that could have for that person personally. It’s just making people more aware of how to treat others and just because you say something and maybe joking, other people take it seriously,” said Tonya McCroden, seventh-grade language arts teacher.

The four students brought the idea to create All About Kindness to the rest of the school during an assembly during Digital Citizenship Week in October. Afterward they met and began adding more members to their group.

“(Our goal is to) open it up to others and spread kindness around the school,” Wells said.

Soon after they organized, they began finding simple ways to show compassion to their peers.

“We started to do activities like paper chains, where everybody would write down a quote or a word about kindness. Throughout the grades we had a competition, and whoever had the most paper for the chain or whoever had the longest chain, they got root beer floats,” said Pfeifer, an eighth-grader and the daughter of Heather and Grant Pfeifer.

They have also made posters about kindness to display around the school and have placed Starbursts candy in students’ lockers to brighten their days. Their biggest project so far was raising the funds for everyone in the school to see the movie “Wonder.” Their original goal was to raise about $200, but through prize basket giveaways, help from the school’s Parent Teacher Organization and donations, they were able to raise $2,000. Not only was the whole school able to attend the movie last week, they also all received free popcorn at the Sun Theatre in Holdrege.

“The PTO has really gotten involved to make this happen, and the community has been very supportive of it. It was like everyone wanted to make sure that not only everyone got to go to the movie but everyone got a snack at the movie. It’s really cool,” said Hartzog.

With one large project in the books, the students aren’t planning to slow down. They are planning to help fifth- and sixth-graders organize their own branch of All About Kindness next semester. They don’t have another large enterprise in mind yet, but they do plan to continue to do small acts until their next big idea arises. They have already seen how their friendly actions have an effect on others.

“Just in this group, we’ve made so many more new friends and become closer. Also I think we are starting to make an impact on the school,” said Delaney Ham, an eighth-grader and daughter of Michelle and Jeremy Ham.

Their teachers have also seen how the group has matured and grown from the short time its members have been together.

“I think that’s one thing I’ve noticed is maybe just a little more confidence with these students and at least identifying students they feel are left out and just kind of struggling,” Hartzog said.

“That was one of the goals that the kids first said too is that they wanted to create a culture of kindness in the school. It didn’t have to be just a certain month, a certain week, like that’s just what we were known for; everyone is helping and being kind to each other,” McCroden added.

Quinn's attorney asked Judge David Urbom to change the location of the trial, suggesting it be taken to a larger county with a great population where the jury hasn’t heard of the case and drawn conclusions.

Jeremy Anderson is being held at the Buffalo County Jail on a $100,000 bond.

A line of Holdrege Middle School students waits to receive popcorn and drinks Wednesday at the Holdrege Sun Theatre. The students saw the film “Wonder” after the group, All About Kindness, raised $2,000 to see the film. The group organized in October, and its goal is for the school to have a culture of kindness.

From left, Kendra Herbeck, 13; Isabelle Vap, 13; and Alexis Gill, 12, settle into their seats Wednesday to view “Wonder” at the Holdrege Sun Theatre. The Holdrege Middle School students were able to see the film after the group, All About Kindness, raised money for the entire school to go to the movie and enjoy free popcorn. Herbeck is the daughter of Misty and Kent Herbeck, Vap is the daughter of Josh and Sally Vap, and Gill is the daughter of Ryan and Allison Fritsche.