GIBBON — A dated chandelier from the Junk Jaunt. A tin bathtub. Aged bleachers from the S-E-M football field.

Those are just a few of the fetching pieces that Alissa Kern-Pierce and Morgan Karlberg have used to create The Farm, a new, unique wedding venue a few miles northeast of Gibbon.

It’s an offshoot of The Village, a dilapidated warehouse-turned-party venue opened by Kern-Pierce in October 2019 at 1920 Ave. A in Kearney, just south of the Union Pacific tracks. In its short life, The Village has attracted so many weddings, corporate events and more that early in 2020, Kern-Pierce dreamed of opening a second location.

“We were so booked. We kept getting calls and we kept saying we had no availability,” Kern-Pierce said.

She found a second site, but when COVID shut down The Village, she despaired. “We had weddings booked into August,” she said.

But Karlberg, event coordinator at The Village, emailed her: “Sometimes, there is beauty and rest found simply in sustaining. Don’t underestimate the beauty and accomplishment of holding on, of standing your ground, of refusing to give up. Of sustaining.”

Early in 2020, before COVID, Kern-Pierce thought about expanding by buying land and building on it, but that wasn’t affordable.

Scouting around on Facebook, she discovered a 10-acre farm and farmhouse for sale north of Gibbon, just north of the Wood River. She made calls. She drove out to look at it. The owner wasn’t home, so she peeked into the windows.

She went into the barn. She found sheep, goats, two little donkeys, quails, a dog and “so many cats.”

She learned the owner had been affected by the 2019 flood and wanted to move to Grand Island because the property had become too much for him. Kern-Pierce bought it. She closed in March 2020, right when COVID hit.

She and Karlberg panicked at first. Then they sat down and breathed deeply.

The blessing of COVID

The pause gave them time to think about what they wanted to do at The Farm. “We got to dream up as much as we wanted and think things through,” said Karlberg, who had started working at The Village just two months earlier.

First, they got busy with cans of paint. The house, built in 1911, was in good physical condition, but its walls were hunter green and burgundy. The kitchen — and its ceiling — was turquoise. Karlberg selected soft new colors. They had a painting party with family and friends.

“We got lucky with the house,” Kahlberg said. “It had really great character and charm. The windows were updated before we bought it.”

They brought in charming old furniture, including a piano, too. They created a warm bridal suite upstairs and hung fabric on the walls of the guest room.

Not an inch of space went untouched, including the mammoth-sized bathtub. “It was so large that there would not have been enough hot water to fill it,” Karlberg said. “We thought about a shower, but we liked the idea of a soaking tub. We looked into a claw-foot, but we decided that a tin water tank was perfect. Our plumber came up with the spicket faucet to go with the tub.”

She added, “Alissa has really let me run with ideas and goals. Neither of us likes to think inside the box. Each of us brings a different perspective, which creates some fun opportunities.”

In September, with the house finished, they focused on the barn, the property’s focal point. They added windows on the north side to let in light. They poured cement over the dirt floor. They added electricity and heating inside, and a large awning on the exterior’s north side for shade for outdoor events.

The biggest challenge was the barn’s interior and the glittering chandelier that Kern-Pierce had found on the Junk Jaunt. “It had metal rings and a few strands of beads. I added a lot of beads, and in the middle, I put an old light fixture that came from an old house. I added more lights,” she said.

They had removed both the loft and the second floor in the barn, but without the second floor, the barn ceiling was so high she couldn’t hang the chandelier, so electricians put it up using an old pulley system that farmers used to raise hay up to the loft.

During the work, brides-to-be came out to view the property. “We had one tour last July when the house was done, but we hadn’t touched the barn. We showed them the unfinished barn, the hay and the stalls, but they still booked with us,” Kern-Pierce said.

Last summer, the S-E-M school district redid its football field, and Kern-Pierce found on Facebook that it was selling all 200 of its wooden bleachers. “I went and looked and said, ‘We’ll take them all,’” she said.

Their “all things projects” man Chuck Gomez, who did much of the work at The Village, is busy turning the bleachers into tables and chairs. He is also building a concrete walkway and a pergola, which will measure 100-by-100 feet and provide shade for 400 guests.

Kern-Pierce’s father Nick and his friend Roland, both retirees, have built tables and benches. “We call them our ‘dynamic duo,’” Kahlberg said.

Soon, a dance floor of stiff plastic will be laid between the barn and the pergola shortly. They’ve also hung tiny white lights outside to make the barn sparkle in every season.

The home was built in 1911 by the Cook brothers, although confusion remains about its location. “When we walked up to the house, the original foundation was out there, so at some point they moved it and added on,” she added. The barn was built in the 1920s. Deer, cranes and turkeys meander through the property.

The neighbors say the Cook brothers, both bachelors, slept outside, even in the winter, and that they never washed their overalls. “They bought new overalls only when they could stand their old ones up on the stairs,” Kahlberg said.

Kern-Pierce hung the first billboard about The Farm last summer. She also posted information on Facebook.

“We would tell people, ‘there’s no availability at the Village, but we have this farm . . . “ Kahlberg said. Guests perked up. “People wanted someplace outside because of COVID. They didn’t want to be in a confined space.”

So far in 2021, the calendar at The Farm is filling up well into October. The barn and the house can be rented for winter events as well. “When it’s snowing, the barn can be gorgeous,” Karlberg said.

A year ago, when COVID-19 shut down The Village, she assured Kern-Pierce that “It was the Lord’s way of saying, “Take your time…sit in the space…it will all be OK.” She was right. 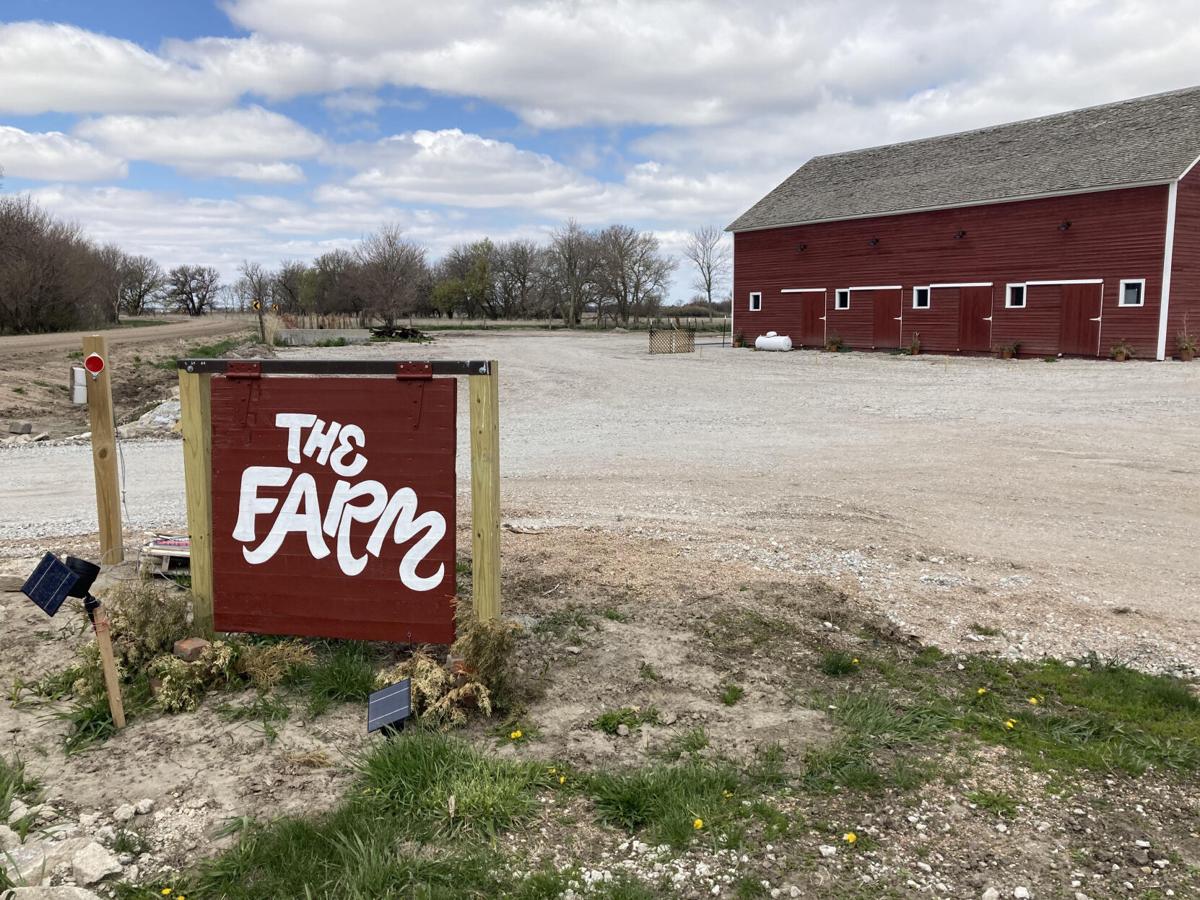 Work is still underway at the entrance to The Farm, but a large red sign welcomes guests. The 10-acre site sits next to the Wood River and attracts deer and wild turkeys. 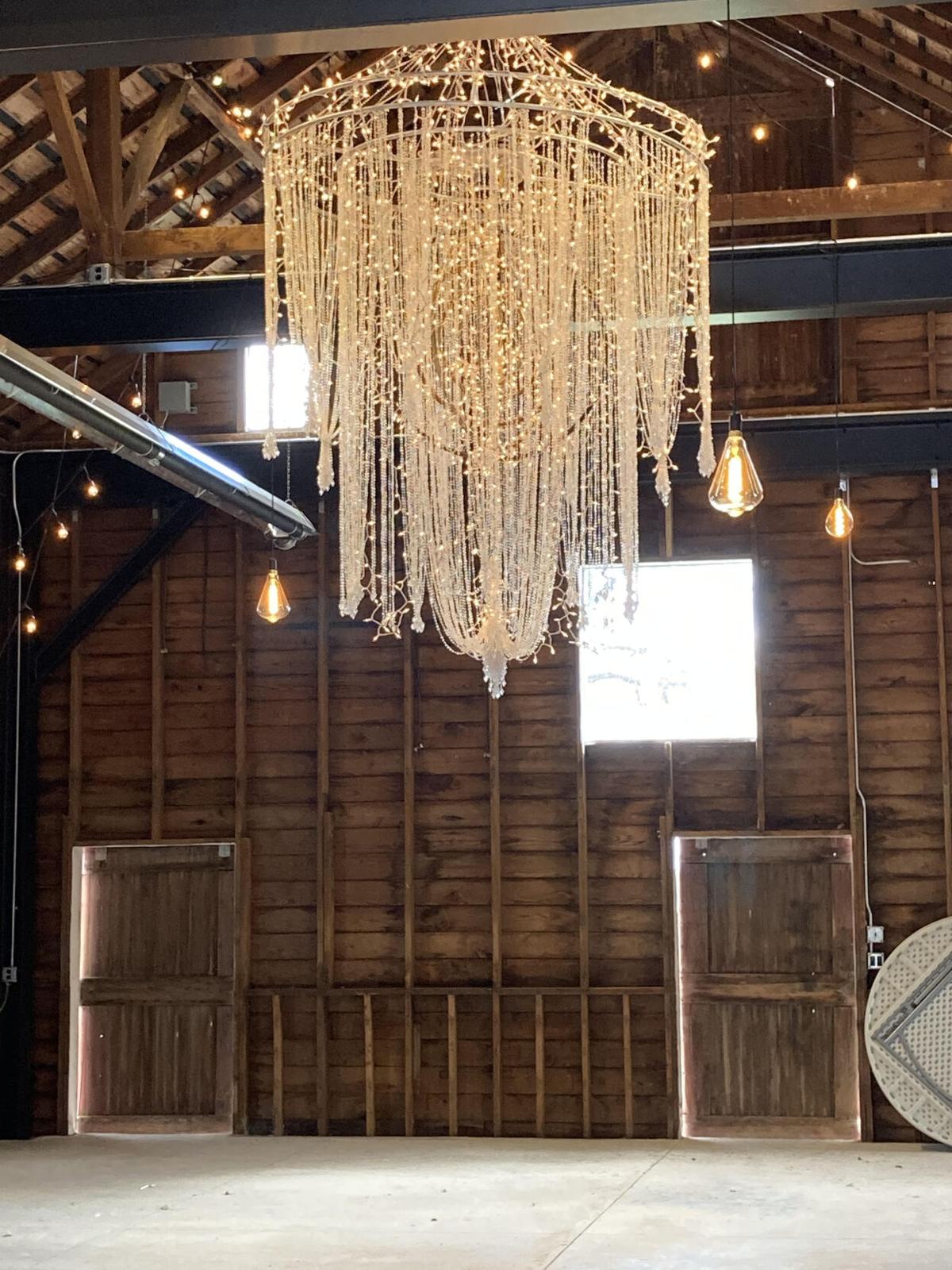 Alissa Kern-Pierce, owner of The Village and The Village Farm, found this chandelier at the Junk Jaunt, refurbished it, and had it hung as the lofty centerpiece in the barn.

This tin bathtub in the bathroom upstairs provides a spa-style soak. The antique fixtures at right deliver the water. 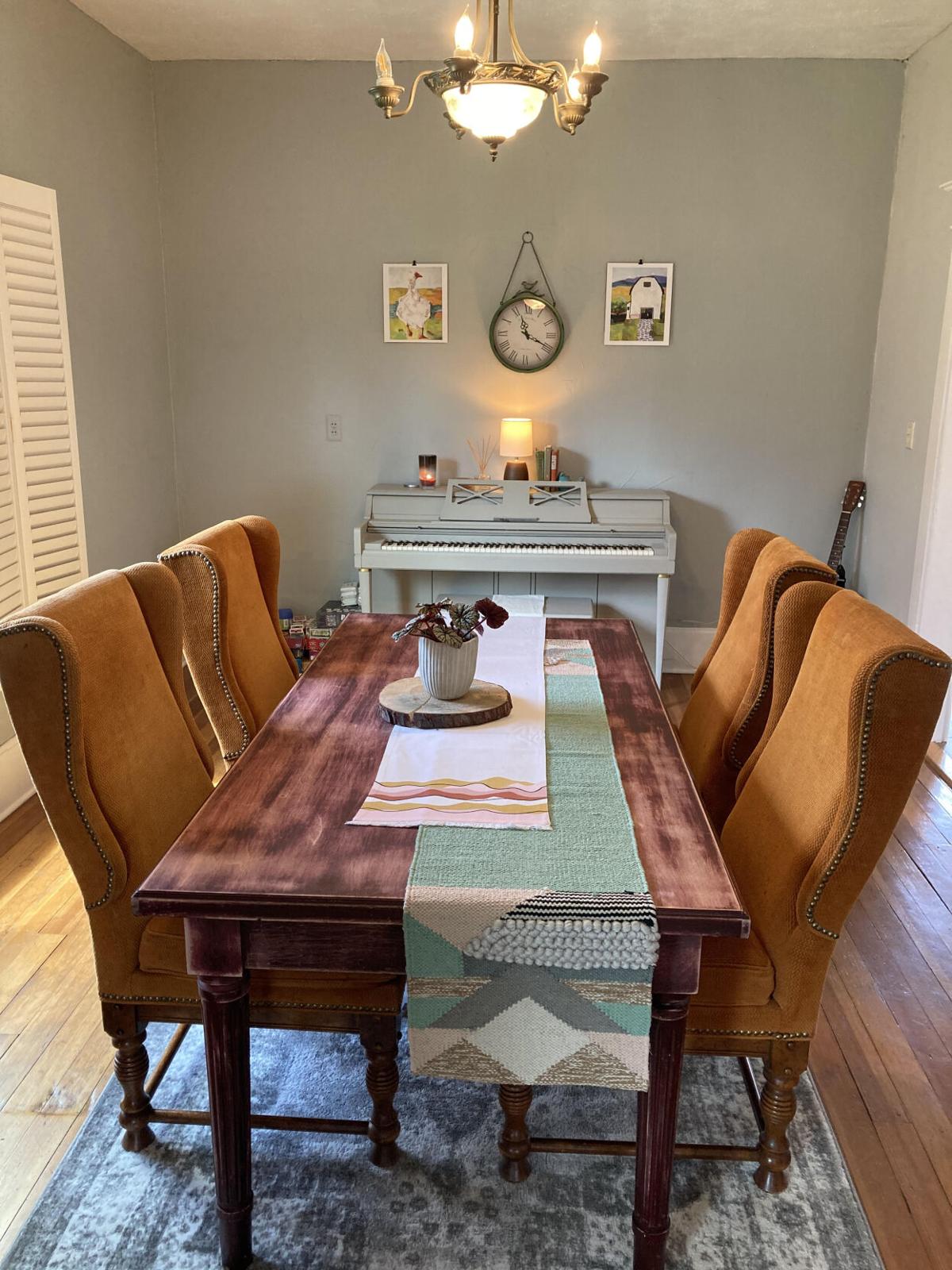 Bridal parties can sit down for a bite to eat in the dining room in the house. They also can play the piano that sits under the clock in the room’s west end. 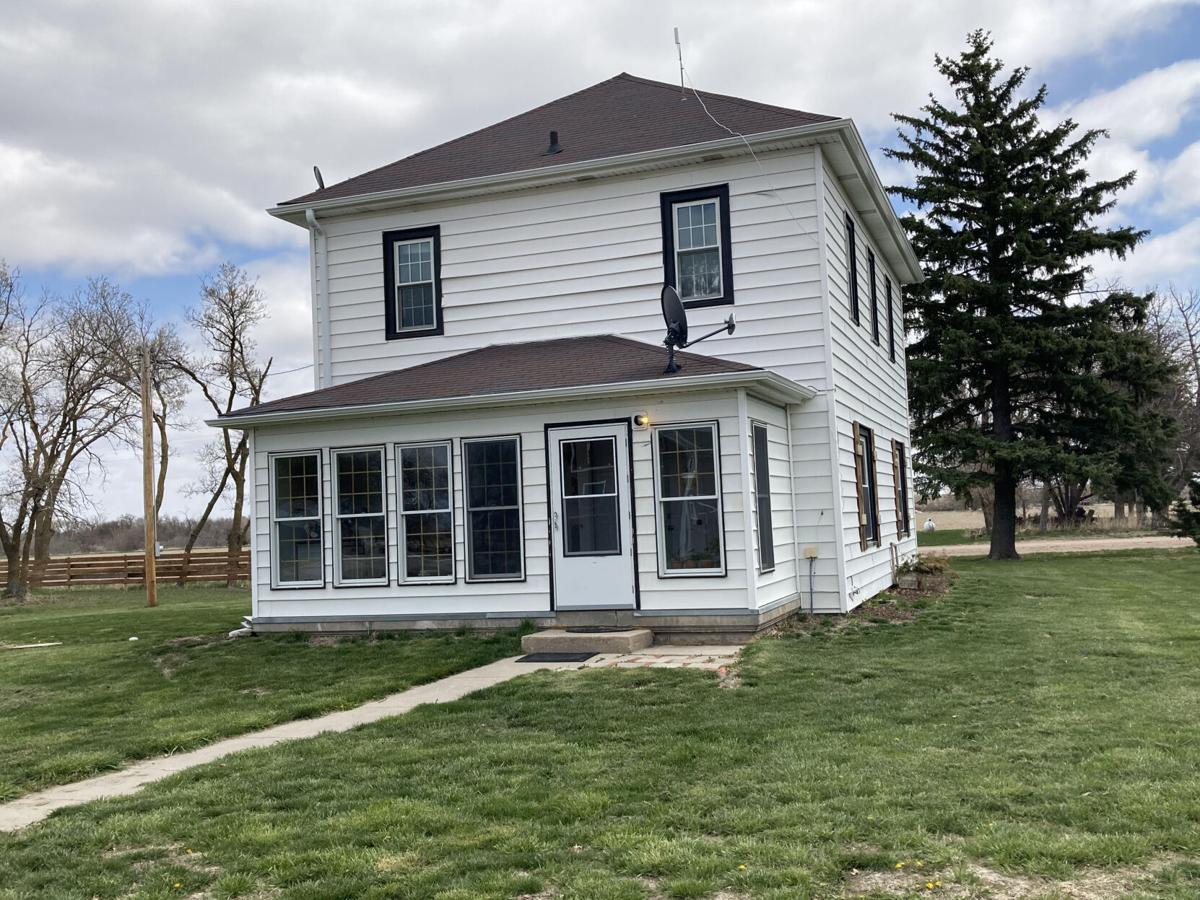 The house at The Farm was built in 1911. It is renovated for bridal parties as a place to relax, dress for the wedding and spend the night. 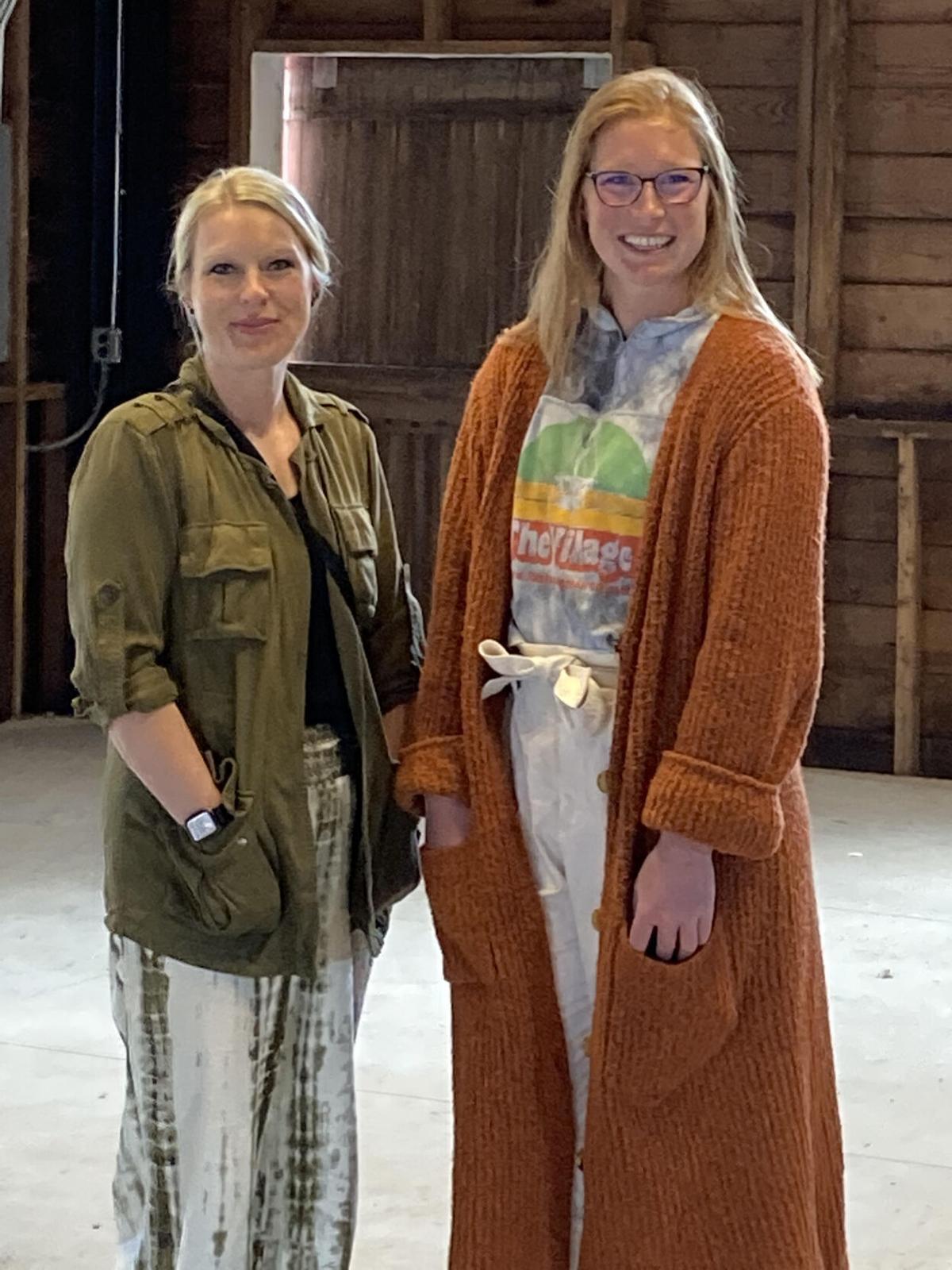 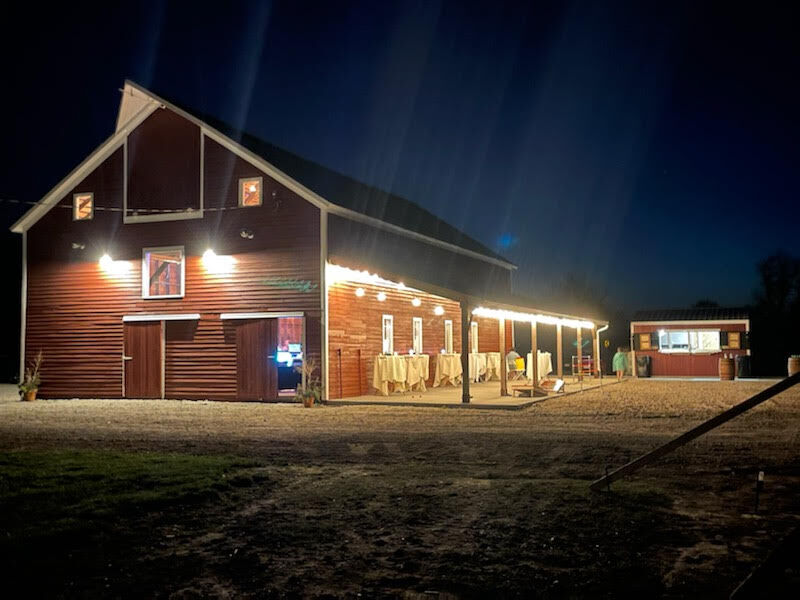 The Farm’s large barn sparkles at night on its 10-acre site just north of the Wood River near Gibbon. The red building in the distance is the bar.