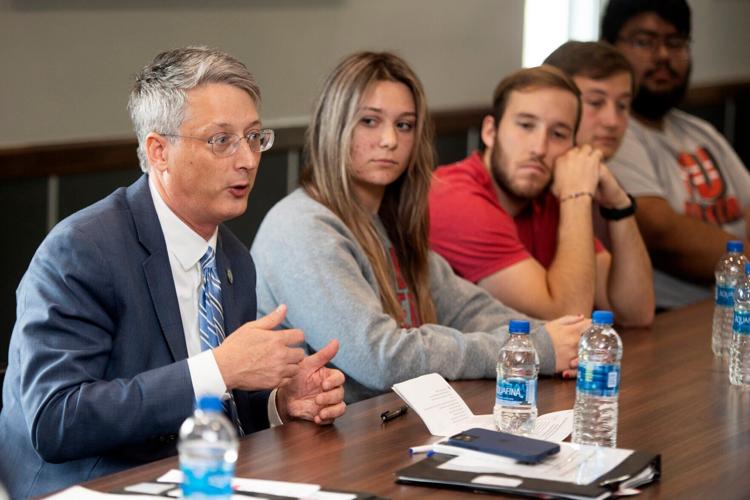 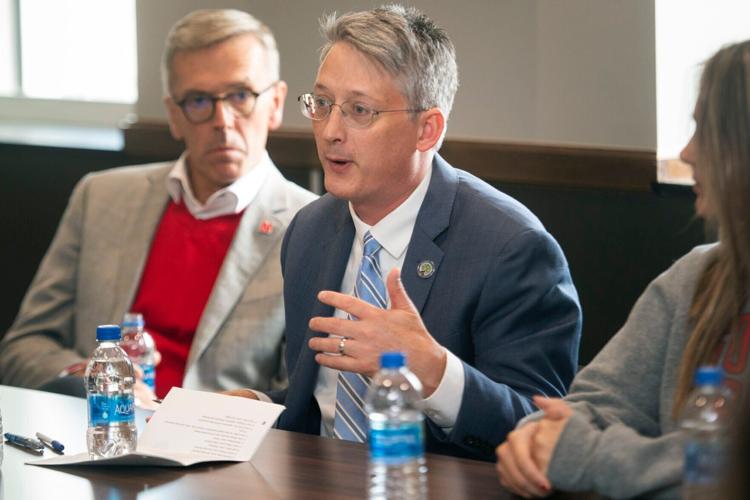 University of Nebraska-Lincoln Chancellor Ronnie Green (left) looks on as James Kvaal, deputy undersecretary for the U.S Department of Education, leads a roundtable discussion with UNL students on Friday at Nebraska Union.

The Biden administration's plan to forgive up to $20,000 in student loan debt is a first step toward addressing the cost of pursuing a college degree, the nation's top official on higher education policy said Friday.

James Kvaal, the deputy undersecretary of education, told students at the University of Nebraska-Lincoln more action is planned to ensure a college education is accessible and affordable.

That includes increasing the amount available to students through Pell grants — after raising the Pell grant award by $400, the Biden administration has announced plans to double it — and reducing the cost of repaying student loans, Kvaal said.

"We're also working really hard on making these loan forgiveness programs work," he added, pointing to easing regulations for how borrowers could qualify for forgiveness if they work in public service.

Friday's visit to UNL, which followed a similar visit to the University of Nebraska at Omaha, presented an opportunity to hear from students about their experiences in accessing and affording a college degree, with an eye on creating solutions that keep tuition costs low.

Chancellor Ronnie Green said UNL and the NU system more broadly continue to be focused on ensuring students can afford college and feel confident they can attend.

"As a land-grant university, it's a bedrock upon which we're founded here and we still live and breathe it every day," he told students.

Kvaal, a native of Massachusetts who grew up visiting grandparents in Omaha and attending Husker football games, said common themes have emerged on the various college and university campuses he's toured since becoming undersecretary.

"Something that's different from when I went to college is just how focused people are on affordability," he said. "When I was in college, I took out loans and sort of assumed it would all work out. For young people today, I think there is a lot more awareness of the trade-offs."

Some talked about their experiences being part of the 22% of UNL students who are the first in their families to enroll in college — or even graduate high school.

Others described being the child of immigrants and having to do things their parents had never experienced, such as applying for student aid or accessing services on campus.

Several students described how they had passed up their first choice of school, or the opportunity to compete in intercollegiate athletics at another school, in order to make a better financial decision by attending UNL.

And a handful of out-of-state students described for Kvaal how it made more financial sense to pay the nonresident tuition rate at UNL rather than pay in-state tuition at a public college or university in their home state.

Programs like the Nebraska College Preparatory Academy and the Teacher Scholars Academy were mentioned as boons to students who otherwise felt they wouldn't be able to attend college, while financial aid programs such as the Regents Scholarship and Susan Buffett Scholarship made UNL financially attractive.

Kvaal said he was particularly struck by comments from multiple students who said they had to pass up educational opportunities while enrolled at UNL in order to work a shift at their off-campus jobs in order to pay their bills or graduate without debt.

When asked by Green for a show of hands of students who are currently employed, nearly all raised their hands, while about half indicated they work more than 20 hours a week while also attending classes as a full-time student.

"I don't remember feeling quite so much pressure, that if I make a mistake or a choice now I will regret it," said Kvaal, a graduate of Stanford University who holds a law degree from Harvard. "I think that's really different now."

Green also asked students if they thought college students should be required to take a financial literacy course.

In 2021, the Legislature passed a bill (LB452) from Omaha Sen. Terrell McKinney requiring public school students to pass a class where they learn how to budget their finances, pay taxes, insurance and build and monitor credit.

A few students said they thought they would have benefited from such a course in college and thought UNL should make it a general education requirement; one student said he thought it should be offered but not mandated.

Kvaal said he appreciated the input he heard at both Nebraska tables Friday, saying the experiences and comments will help shape future policy, "so when we do have help to offer, we want to make sure it actually reaches students."

"They were a very impressive group of young people," he added. "They make me feel better about the future."

Thursey Cook, a secondary education student from Ceresco, said she appreciated the opportunity to share her thoughts and experiences not only with Kvaal, but with her peers at UNL. She said she felt the students were listened to.

"I think we were all pretty raw," she said. "Living in Nebraska, I just assumed that most people were able to have their parents fund their education — I have a lot of friends who have that ability — but I didn't realize so many people here struggled with that."

Breaking down Nebraska's colleges and universities

University of Nebraska-Lincoln Chancellor Ronnie Green (left) looks on as James Kvaal, deputy undersecretary for the U.S Department of Education, leads a roundtable discussion with UNL students on Friday at Nebraska Union.