In mid-August, Rhonda Mueller welcomed her 26th class to Elliott Elementary School in central Lincoln. As her new crop of fifth-graders filed into the room, she checked off names and listened to the students’ excited back-to-school chatter.

The bell rang, and Mueller gazed at her students, arranged in a circle in the middle of the classroom, ready to begin a new year.

There were 21 chairs. One sat empty. On the first day of school, Mueller had her first official absence of the school year.

“How do you go back?” Mueller said. “That was some critical community building that we did those days. The entire class kind of had to take a step back and teach (the absent student), because he can’t go on without that. … It takes us all back, students, too.”

Chronic absenteeism in Nebraska’s public schools skyrocketed during COVID-19, according to the most recent statewide data.

Nearly one in five Nebraska students missed at least 10% of days during the 2020-2021 school year, chronic absences that caused many of those students to fall behind academically and socially.

The pandemic has sickened students. It has exacerbated mental health issues. It has also made life harder for many students already living below the poverty line — both things that in turn made missing school more likely.

Now, teachers like Mueller are trying to balance the growing gulf between students who attend regularly, and those who rarely show. And educators and community leaders across Nebraska are searching for ways to rebuild relationships with absent students, while trying to help more families get their children back to school.

“No matter how good your teacher is, no matter how good the system is, if you can’t get the student in the seat, there’s not a whole lot you can do with them,” said David Jespersen, spokesman for the Nebraska Department of Education.

Teachers like Mueller notice the absences in their classrooms every day, observations backed by data from the Nebraska Department of Education.

And Nebraska’s chronic absenteeism rate jumped by nearly 60% during that six-year period.

These student absences affected rural, suburban and urban schools in every corner of the state.

The trends look particularly bad for students from families of low-income as well as students of color.

More than half of Native American students in Nebraska were chronically absent that year as well, along with 40% of Black students and 29% of Hispanic students across the state.

Joseph Lefdal, principal of Schuyler Central High School, estimated that 40 students in his building work overnight shifts to earn an essential paycheck for their families. Many Schuyler students must accompany family members to appointments to translate, or miss multiple days to visit family in other countries.

Deb Rasmussen, president of the Lincoln Education Association and a longtime school counselor, described keeping food, clothes, toothpaste and a straightening iron in her room to meet student needs.

It’s hard to go to class, and harder still to learn, when a student is worried about things like food, clothing and stable housing, said Nicole Seymour, director of Greater Omaha Attendance and Learning Services, which provides resources and counseling to chronically absent students.

“They’re thinking about what’s for dinner tonight, and am I going to be able to locate that for my kids?” Seymour said.

For students of all income levels, feelings of anxiety, depression and isolation have become more common since the outset of COVID-19, school officials said.

But students from low-income families are less likely to get help for these problems, and more likely to miss school as a result.

“The continued divide in those disparities of families that were already struggling, they just intensified,” said Anne Hobbs, director of the University of Nebraska at Omaha’s Juvenile Justice Institute.

Absenteeism impacts students beyond their participation grades. Learning concepts often build upon each other. It’s tough to relearn multiple days of concepts without consistent school attendance.

“We can’t relive what a teacher does for the kid every day in the classroom,” said Lisa Schroeder, principal at Meadows Elementary School in Ralston. “We had chickens in kindergarten. We cannot put that little chicken back in the egg and go through that process again. Your child misses out on critical events, relationships, happenings.”

Students also fall behind their peers socially when they regularly miss class, sometimes creating or worsening feelings of anxiety or isolation.

Chronic absenteeism can also affect the entire classroom. Teachers are forced to balance students who are grasping current material with those who are behind, sometimes sacrificing general instruction or planning time to individually reteach students. Rasmussen described similar struggles as a school counselor.

“That can take over my entire day,” Rasmussen said. “(Counselors) would want to go out and do lessons on different things in the classroom. A lot of times, we spend all our time trying to track down kids and their families.”

Now, some schools are working hard to reverse the effects of several years of skyrocketing absenteeism.

Schuyler Public Schools is one of the few school districts in the state to lower its rate of chronic student absenteeism in the last few years.

The school district has done so by creating a “recovery model” that requires students who are late or absent to make up that time after school or on weekends.

This program helps students stay on track academically, while also creating flexibility in student schedules, school leaders say. The district also dismisses students at 1:30 pm on Friday, providing time for students to make up absences at the tail-end of the week. The program has been utilized by pregnant students and students combating drug addiction, as well as those who work overnight shifts.

“Schools want to put all this policy and procedure in place that hurts kids, that doesn’t do the right things for them,” said Lefdal, the Schuyler high school principal. “But if we just spend a little time up front and actually do the work with the kid when they’re not in trouble, then you’re building relationships.”

Other Nebraska schools are focusing on rebuilding school communities while hoping to boost attendance.

The goal: Reach students who don’t participate in athletics or the fine arts, and attempt to get them invested in coming to school, said Superintendent Chris Prososki.

Ralston also added Principal Advisory Committees to each school, allowing a group of students to advise their building principal on chosen topics. Schroeder’s committee at Meadows Elementary focused on attendance.

Her students had a one-word answer when asked about an incentive to promptly attend class: Candy.

Ralston teachers now give Sour Patch Kids and lollipops to students in their seats when the first bell rings.

School districts across the state are also utilizing federal and state funds to combat some of the root causes of absenteeism.

Nebraska City Public Schools was one of three Nebraska districts that received a federal grant that allowed the district to contract community-based professional counseling for students.

Gage County received a grant that requires stakeholders across the county to meet quarterly and work to tackle the issues affecting school-age children.

“It is difficult sometimes in the rural area, because we don’t have as many resources that a Lincoln or Omaha (have),” said Christina Lyons, director of Gage County Multiple Agencies Partnering for Success Coalition. “What we don’t have in resources, we make up for in relationships. I feel like every person at that school is working with this kid or this family wants to see them succeed, wants to see them do their best.”

Back at Elliott Elementary in Lincoln, Mueller sits with her students in a circle, one of many strategies she calls “restorative practices” in her classroom.

Mueller was trained in restorative practices — a proactive mindset that intentionally builds community that emphasizes relationships — six years ago through her school district.

In her classroom, students are seated in a circle and hold a “talking object” when speaking. Mueller and her students work together in the first week of school to create a social contract, which outlines how students want to be treated by children and adults in the building. Since implementing these practices, instructional periods are less hectic and student misbehaviors less frequent, she said. 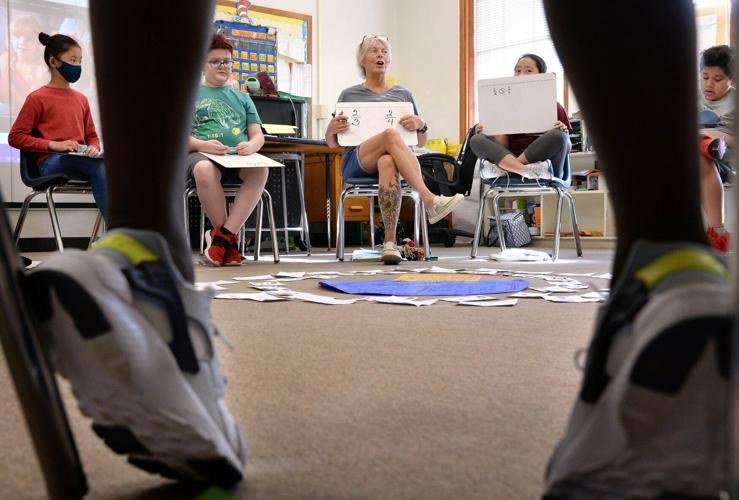 Students face each other in a circle and work on whiteboards during a math lesson in Rhonda Mueller's 5th grade class at Elliott Elementary School. 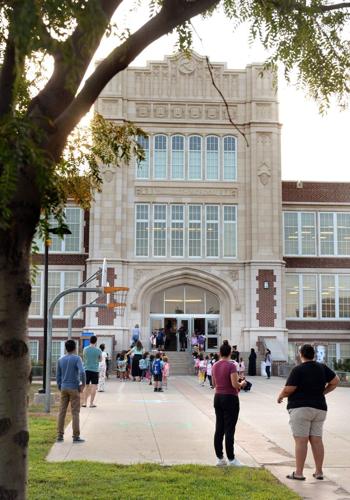 A handful of parents linger to watch as their kids are led into Elliott Elementary for the start of their school day. 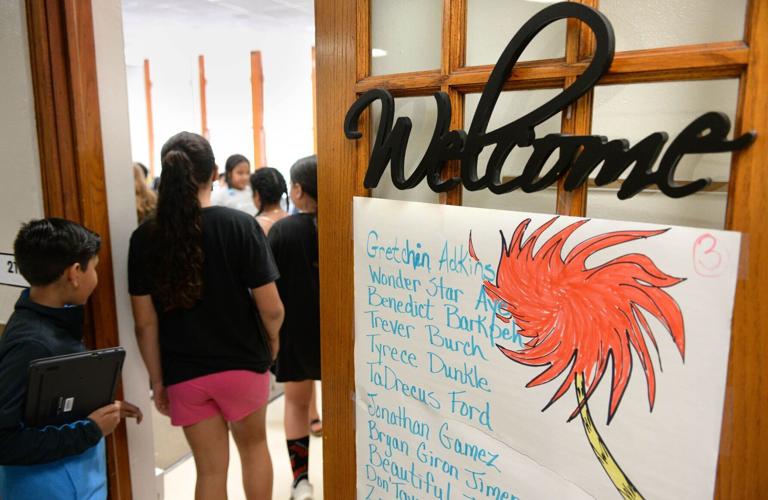 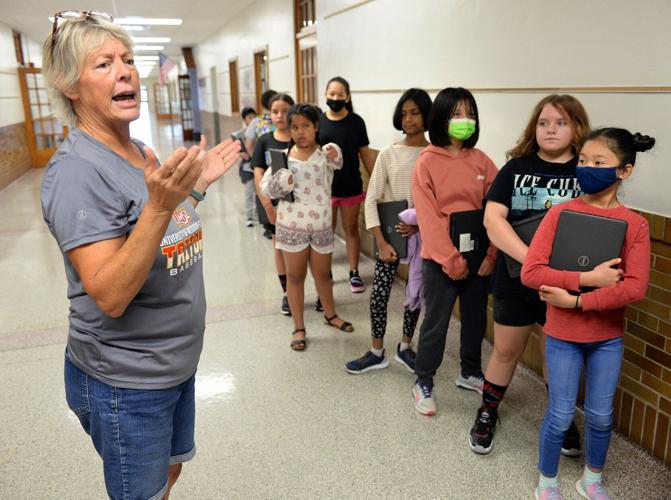 Teacher Rhonda Mueller speaks with her students in the hall at Elliott Elementary School. 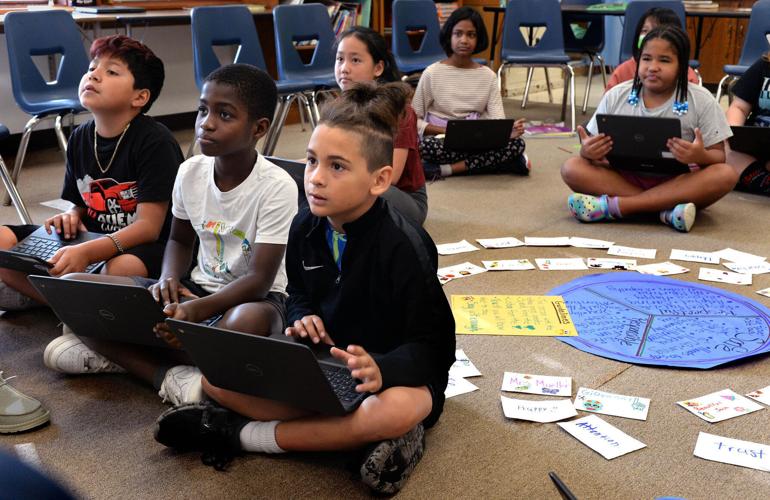 Students share floor space with cards bearing each of their names, guiding principles and rules for they way they conduct themselves in class, as they play a learning game online together at Elliott Elementary School. 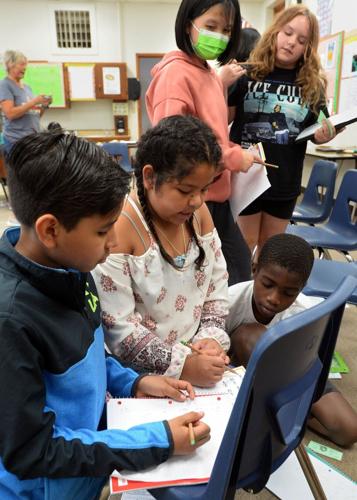 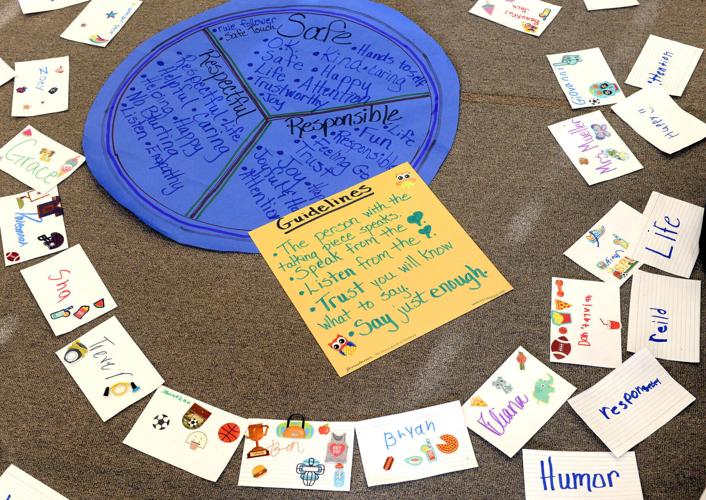 Student name cards, guiding principles and rules for the class occupy the center of the floor in an Elliott Elementary School classroom.