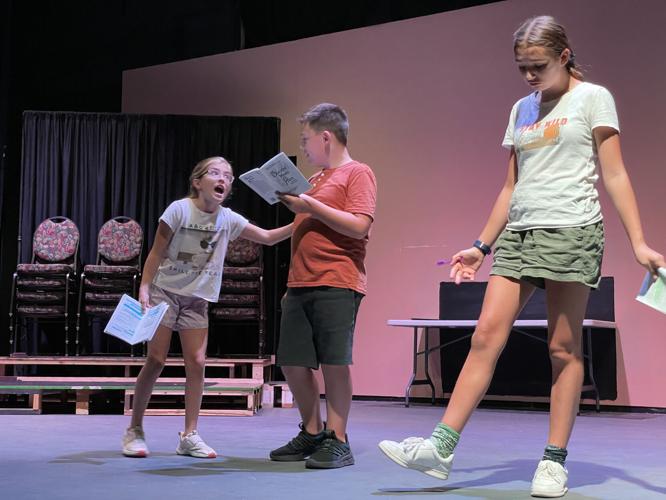 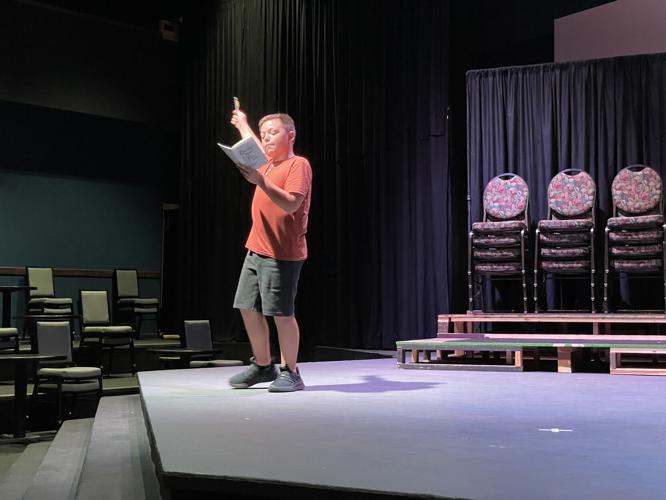 Judson (Jonas Brandt) tells the audience the tale of how he fell asleep while doing his homework and ended up in the woods between Oz and Wonderland.

KEARNEY — When it comes to performing on stage, director Tiffany Stoiber believes that children have an edge over adult actors.

“I think kids have an advantage that adults don’t necessarily have where they are way more willing to be silly, to try new things on stage and to totally give it all,” she said. “Sometimes I feel like adults are worried about looking too silly or doing something ‘out of the box.’ With these kids, they have been so willing to try different things, to do something because they think it’s funny. And it works so well.”

Stoiber talked about her experiences with members of the Academy of Children’s Theatre. “These kids are so talented that I feel like, more than anything, all I need to do is rein them in and say, ‘Hey, that’s might not quite work,’” she said. “A lot of the kids have been on stage and already have an instinct for how to move.”

The Academy of Children’s Theatre presents “Dorothy Meets Alice (or The Wizard of Wonderland)” 2 p.m. Nov. 5-6 at Kearney Community Theatre. Tickets for the show are $8.

Stoiber calls the family-friendly show a mashup of two classic children’s stories, “Alice in Wonderland” and “The Wizard of Oz.”

“It’s a fun combination of the two stories we’re all familiar with,” she said. “This is told through the lens of a little boy who has not done his homework assignment and so doesn’t know the stories super well. It’s full of fun exploration of the world, silly jokes and encounters with these characters, and, at the end of the day, the characters all learn a little more about getting along with each other.”

When it comes to creating a story on stage, Stoiber believes in collaboration with the performers.

“This is just as much the vision of the kids as it is mine,” she said. “I’m putting together the overall blocking and giving them guidance on how the story needs to flow, trying to guide them through how to express emotions through their characters. There really is a stamp on this show for each of the actors.”

The director encourages community members to attend the performances.

“For these kids — and knowing as an actor myself — there is a big difference between practicing something and actually getting a chance to tell that story to an audience and be in the same room as people who are watching you tell the story,” Stoiber said. “I’m super excited for the cast to hear the laughter from the audience when the cast does one of their funny bits. I’m also excited for when there’s a shocking reveal and they hear that little gasp from the audience.”

Alice and Dorothy meet up when the boy suddenly finds himself in a strange place somewhere between Oz and Wonderland. It then becomes his responsibility to unscramble the stories and steer the familiar characters — the Cowardly Lion, the Mad Hatter, the Scarecrow and the White Rabbit, among others — to their ultimate destinations while avoiding the Wicked Witch and the Red Queen. The romp features laughter and surprises at every turn.

Stoiber looks forward to the performances.

“The energy is just so different when you actually have people that you’re performing for,” she said. “It’s always fun to go up on stage and just act, but it’s a whole other thing for an audience to actually be there. The audience will have a great time seeing how talented the kids are.”

The cast includes veterans as well as inexperienced children. Working with the volunteers from the Academy of Children’s Theatre gives young people a chance to explore the stage through scripted shows, theater games and exercises.

“They are so fun to watch,” Stoiber said. “Each of the kids, even if they don’t have a line at the moment, they are reacting to different things within their character. The story is funny and there are a lot of jokes in the script and a lot of stuff the kids just do that is funny. Whether your son or daughter is in the show or whether it’s a family friend, it will be a fun show to watch with a nice, cute little story with funny moments along the way.”

“There’s really no down point in the show,” Stoiber said. “Everything is really pretty high energy the entire time.”

What: “Dorothy Meets Alice” presented by The Academy for Children’s Theatre

Don’t let his age fool you, though. With a real estate portfolio totaling $1.3 million, the University of Nebraska at Kearney senior is quickl…

Search dogs, rescue teams, engineers sent from all over the world to Turkey, Syria after quake

Biden on Chinese balloon: 'We did the right thing'

Biden on Chinese balloon: 'We did the right thing'

Learn more about the secret language chimps use to communicate

Learn more about the secret language chimps use to communicate 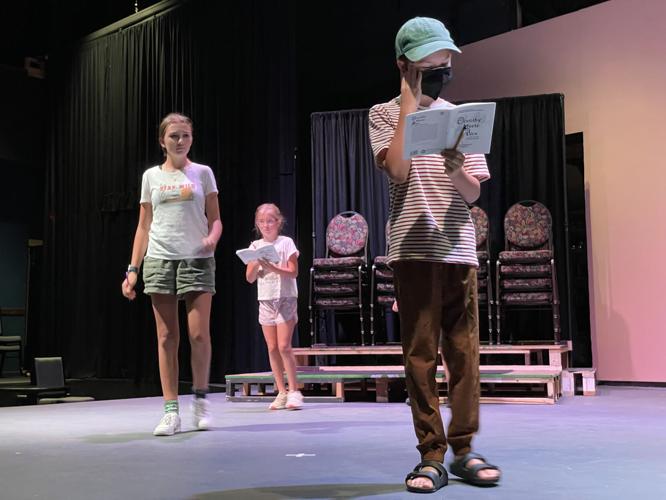 The Mad Hatter (Edmund Rodgers) rubs his temple in frustration over going so long without a cup of tea as he explains his predicament to Dorothy (Ella Means), left, and Alice (Kaitelin Donohue). 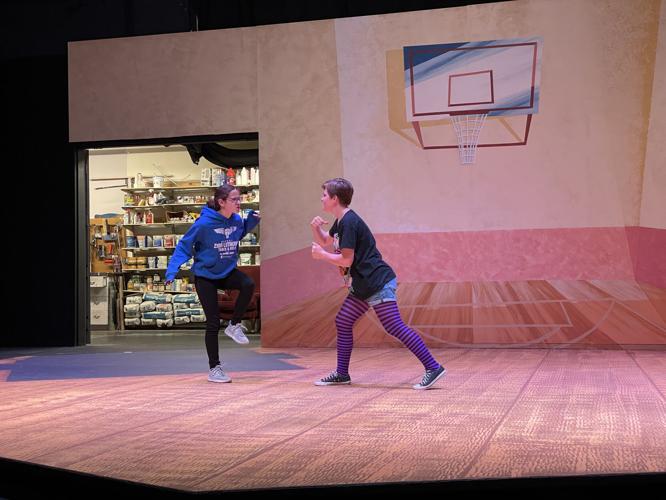 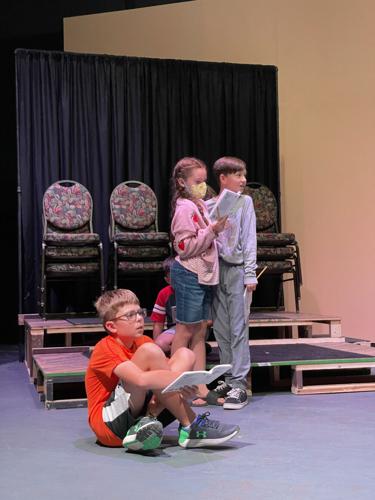 The White Rabbit (Jackson Waller) cowers on the ground while Dormouse (Betsy Williams) and Mad Hatter (Edmund Rodgers) hug each other in fear as they listen to a poem about the terrors of the terrible Jabberwock.

Judson (Jonas Brandt) tells the audience the tale of how he fell asleep while doing his homework and ended up in the woods between Oz and Wonderland.