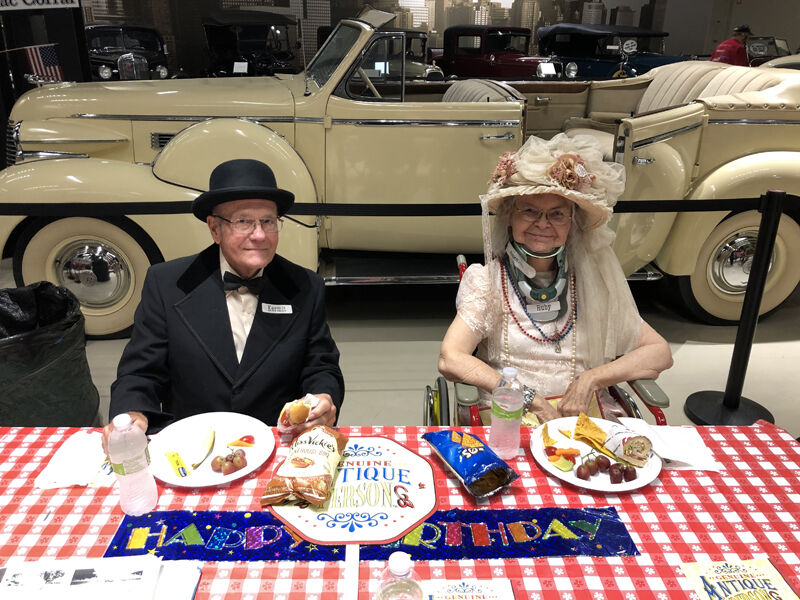 Kermit Wilke and his wife Ruby enjoyed the Sept. 27 surprise party for Kermit’s 86th birthday, which was Sept. 25. They live west of Wilcox and have been married for 63 years. 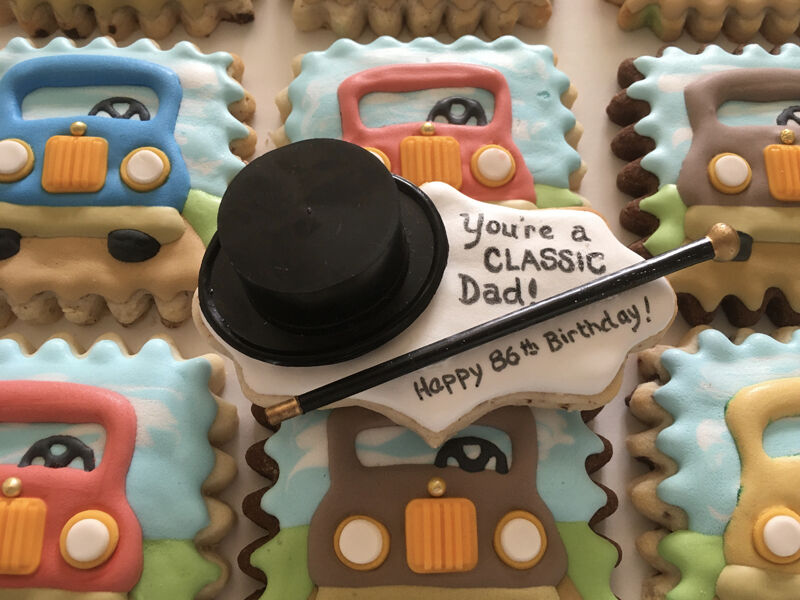 Cyndy Wieland was up until 5:45 a.m. the day of the party to finish decorating these cookies, including one honoring Kermit. She is an accomplished cake decorator who teaches at Central Community College.

About 55 guests, including family and a few close friends, enjoyed the surprise 86th birthday party for Kermit Wilke at the Classic Car Collection. 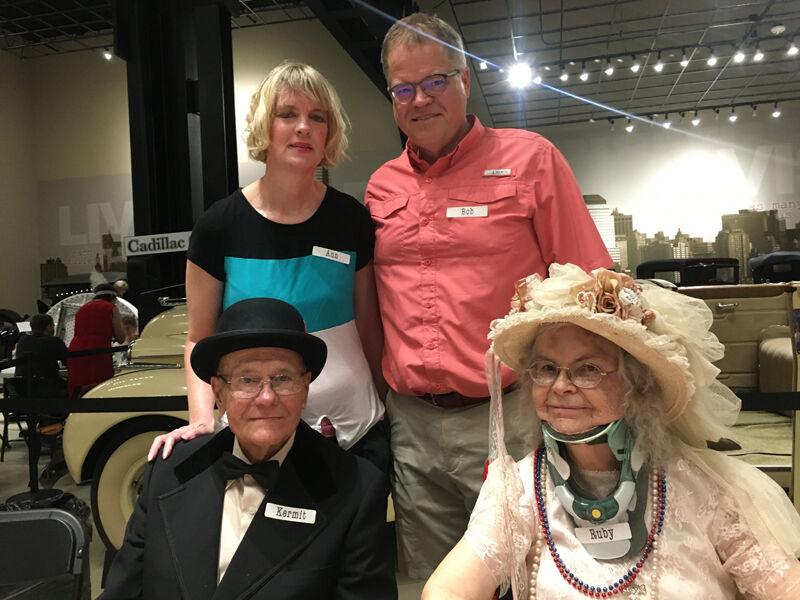 Guests included the Wilkes’ son Bob, also a car collector, and his wife Ann, who live in Lincoln. Ann is the daughter of retired Cornhusker football coach Tom Osborne.

KEARNEY — Kermit and Ruby Wilke were all dressed up with no place to go Sept. 27.

Ruby, wearing a lacy white dress and festooned hat, and Kermit, dressed in a black suit and hat, sat just inside the Classic Car Collection, waiting.

Brad Kernick, the chairman of the museum’s board, had asked them to come in costume at 5 p.m. for a museum photo shoot. They did. Now they sat and waited.

“I thought, ‘There’s something fishy going on here,’” Kermit said.

He was right. That “something fishy” turned out to be a surprise party for his 86th birthday.

The party was Ruby’s idea, but daughter Cyndy Wieland was skeptical. She and her brothers had given their parents a surprise party in August 2019 in honor of their 80th (Ruby) and 85th (Kermit) birthdays.

“Mom said, ‘Yes, you kids gave us a birthday party, but I want to give my husband a surprise party,” Wieland said. When Wieland agreed to help, Ruby put her in charge of the festivities.

Ruby’s mind drifted to other things. She didn’t know that Wieland, who lives between Grand Island and Alda, arranged to have the party at the Classic Car Collection. When Wieland asked Ruby for her address book, Ruby assumed her daughter was arranging a card shower for Kermit.

Nor did she know that Wieland crafted a unique invitation using an old picture from the Kearney Hub of Kermit’s grandmother, Amy Richards, and the 1912 Model T Richards won in a new Hub subscription contest. In many ways, the party surprised Ruby, too.

‘A disease with no cure’

Kermit describes his affection for old cars as “a disease with no cure.” He grew up with old cars on a farm south of Wilcox. “My father wasn’t really a collector, but he didn’t get rid of stuff. I remember he made a comment once: ‘If you had to drive those old things, you wouldn’t be so excited about restoring them.’”

He keeps about 50 old cars on their Wilcox farm, including a 2/3-scale Model T that he started building when he was about 24 and finished five years later. He later drove it in parades.

He’s big into frame-off restorations of orphan cars, or models that no longer are made. Among Kermit’s favorites are models such as Lexington, Gardner, Stanley Steamer and the old Messersmith, which was made in Germany.

For the last 24 years, he and Ruby have participated in antique car tours including the Great Race, and the 2017 Glidden Tour that included stops in this area. Ruby makes their period costumes that coordinate with the old cars.

Nearly 65 years ago, Ruby, then a student at the University of Nebraska-Lincoln, was reading on the porch and “watching the boys drive by” when a blue Studebaker went by. A few days later, it went by again. It was Kermit, driving with a friend. His friend was curious. He asked Kermit, “How come you keep going down that street?” When Kermit explained, the friend dared him to stop to talk to the girl, Kermit took the challenge. The rest is history. They were married on June 9, 1957. They have three grown children and six grandchildren.

A graduate of the University of Nebraska-Lincoln, Kermit taught vocational agriculture in Gibbon for two years while farming on weekends. He then taught a shop welding class and worked on experimental farm machinery in Lincoln.

Next, for 32 years, he managed farms for a bank in Lincoln while living in Holdrege. He spent weekends farming on his property west of Wilcox.

When Kermit retired at age 62, he turned his attention to old cars, car clubs and antique car tours all over the U.S. He currently has about 50 old cars.

The Classic Car Collection was the perfect site for the party because Kermit had volunteered there. “We’d sit at the desk and people would come in and sign in. Kermit walked around, and they had a lot of questions,” Ruby said.

Their two sons are car buffs, too. Robert of Lincoln has a Silver Anniversary Corvette. Curtis, who works with cars and specializes in Camaros and Corvettes, lives near Houston. Other family members participate in car shows, build hot rods, run their own mechanic shop and collect cars.

It was a labor of love; she creates edible art under the name Make Mine Sweet. She has taught cake decorating at Hobby Lobby in both Grand Island and Kearney and currently teaches at Central Community College-Grand Island.

Cyndy’s daughter Tyler Scott, who lives in Hastings, helped Ruby put outfits together for the so-called “photo shoot.” She also sneaked several of Ruby’s handmade 1920s flapper dresses out of the house for family members to wear at the party.

Looking back at that afternoon, “Brad (Kernick) was trying to keep us from wandering around when we got to the museum, but I think he realized I kind of suspected something,” Kermit said.

Surprise or not, the party was a success. So was its location, the Classic Car Collection. “That tied in with the party’s car theme, and it allowed my husband, my children and me to see the museum,” Wieland said.

A watercraft with drag capabilities also was requested to help with the search.

For the past three years, the family has been helping Kayla and Rylan build their home on the countryside northwest of Kearney. The setting affords the couple a panoramic view of the countryside near Riverdale.

Although people may not frequently hear about run-ins with bobcats, it is more common than one might think.

The IRS began investigating the Kearney man in 2017. He was convicted in March.

Plans have fluctuated, but the facility could be 206,000-210,000 square feet — about half the size of the 400,000-square-foot Parker-Hannifin distribution center on Kearney’s east side.

The hike and bike trail may be closed for short periods of time at the crossings.

John W. Paul, 43, of Kearney is charged in Buffalo County Court with misdemeanor motor vehicle homicide in the March 27 incident.

Kermit Wilke and his wife Ruby enjoyed the Sept. 27 surprise party for Kermit’s 86th birthday, which was Sept. 25. They live west of Wilcox and have been married for 63 years. 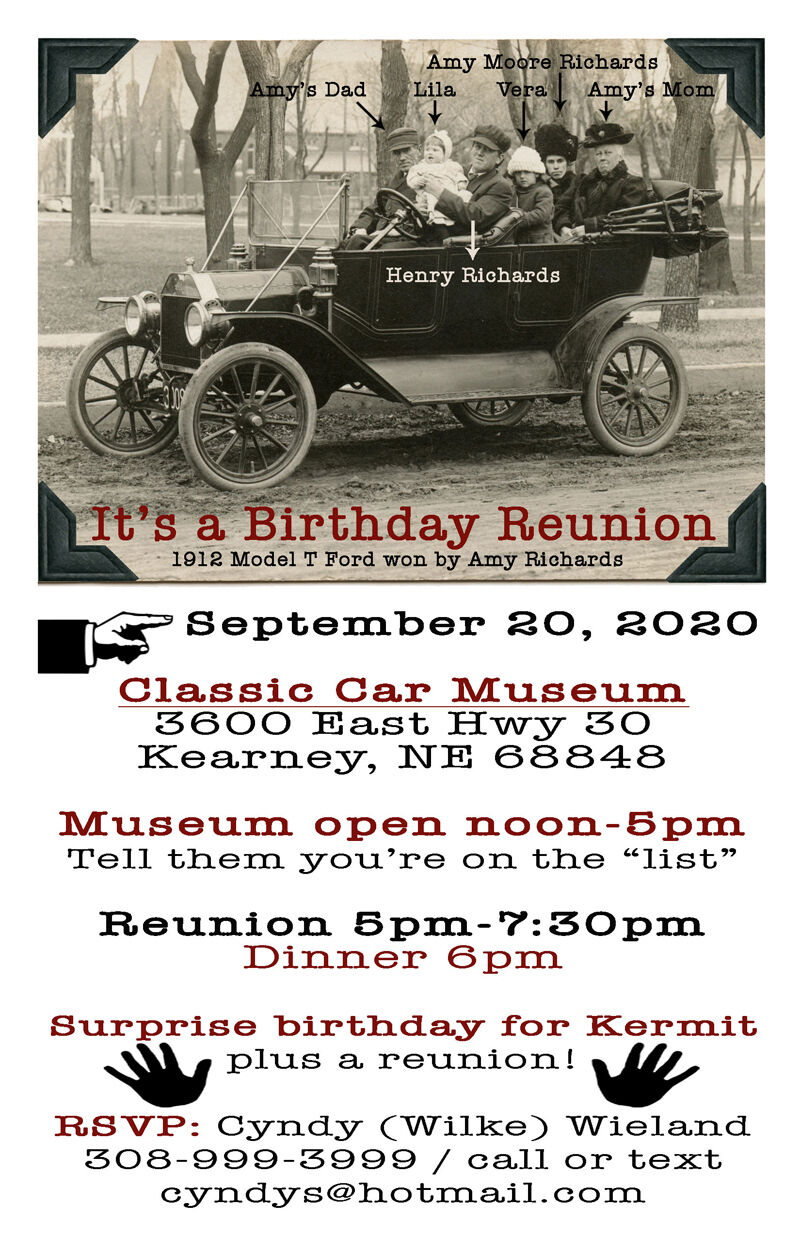 The birthday party invitation featured a picture from the Kearney Hub taken in June 1912. Kermit Wilke’s grandmother, Amy Richards, won this 1912 Model T in a Hub subscription contest. Her family is shown in the car. From left are Amy’s father; her daughter Lila; her husband Henry Richards; her daughter Vera; Amy; and Amy’s mother.

Cyndy Wieland was up until 5:45 a.m. the day of the party to finish decorating these cookies, including one honoring Kermit. She is an accomplished cake decorator who teaches at Central Community College.

About 55 guests, including family and a few close friends, enjoyed the surprise 86th birthday party for Kermit Wilke at the Classic Car Collection.

Guests included the Wilkes’ son Bob, also a car collector, and his wife Ann, who live in Lincoln. Ann is the daughter of retired Cornhusker football coach Tom Osborne.