Before ÝC.S.I.Þ, Helgenberger succeeded at UNK 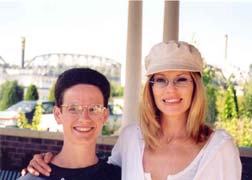 KEARNEY- Long before she became a TV celebrity, "C.S.I." star Marg Helgenberger was a college theater student in Kearney.EDITOR'S NOTE: Katherine Thomas is a staff writer for both the Kearney Hub and for the student newspaper at the University of Nebraska at Kearney, where she is a student.

"She was just like everybody else. She came in as a high school senior, naïve and unpolished, but she had potential," said Jack Garrison, head of the theater program at the University of Nebraska at Kearney.

A native of North Bend, Helgenberger attended Kearney State College from 1977 to 1979. She participated in many plays before transferring to Northwestern Alumnus School of Speech in Evanston, Ill., where she majored in speech and drama.

After graduating, she moved to New York City, where she started her acting career.

"She felt like she was not getting anything new or beneficial after a couple of years here. When she got to Northwestern, she really struggled at first," Garrison said.

At the time, Northwestern was considered the "Yale" of educational theater. The school had an outstanding reputation because of the number of people who had come out of its program.

Although Helgenberger's time at Northwestern benefited her career, Garrison believes a large part had to do with the plays she did outside of the theater program. He believes her acting success is a combination of several elements, including talent, looks, sense, understanding and a strong work ethic.

"I think what makes her successful is that she was not as dynamic in stage theater," Garrison said. "She was in between movies and stage, which made her perfect for television. It takes more than talent to do what Margi did. It takes a myopic, single focus, almost an obsession to pull that off."

Helgenberger's first major role was as Siobhan Ryan on the soap opera, "Ryan's Hope." Since then she has starred on "China Beach," "Erin Brockovich" and now on "C.S.I."

Helgenberger played a prostitute in "A Cry for Players," directed by Fred Koontz. Morrow remembers her mother insisting that she not to be on stage at the same time as Helgenberger because the play was not age-appropriate.

Last year, when Helgenberger was in Omaha hosting a cancer fundraiser, Morrow went to see her. On the first day, Morrow was unable to talk to the star for more than a second before anxious fans swamped Helgenberger. The following day, Morrow had the opportunity to speak with her and reminisce.

"She was really nice. When I was standing there talking to her it felt like a lifetime. I had always wanted to meet her and now I have," Morrow said.

Other UNK faculty members remember attending college with Helgenberger. David Brandt, the assistant director of the Learning Strategies Office, acted alongside Helgenberger in many KSC plays, including "Bad Habits." Garrison said Helgenberger stretched herself and took a lot of chances in "Bad Habits."

Brandt remembers Helgenberger as being attractive, pleasant to be around and good at academics. The two were friends.

"I am very happy for her," Brandt said. "It is a wonderful thing and it could not have happened to a better person."

The woman was pronounced dead at the scene.

The head-on crash crumpled his four-door sedan like a soda can, trapping the 20-year-old Loper football player inside.

Monday the Sherman County Sheriff’s Office was called to investigate a possible sexual assault of a child.

Before ÝC.S.I.Þ, Helgenberger succeeded at UNK