© 2021 Lee Enterprises
Terms of Service | Privacy Policy
A boat made of mushrooms: CCC student to present her fungal creation at state fair, test the waters on the Platte River
0 comments
Share this
{{featured_button_text}}
Tiffany Stoiber

KEARNEY — Next month, Katy Ayers plans to take a six-hour float down the Platte River in a boat she grew herself — from mushrooms.

However, she isn’t planning to take out the fungal vessel until she’s shown it off at the Nebraska State Fair, and proven to the crowds there that mushrooms are the future.

“Mushrooms are the natural recycler of our world,” said Ayers, 27, of Kearney. Material made from mushrooms, whether replacing plastic foam packaging or wood for a boat, is naturally biodegradable and actually will help break down other materials into their elemental form. If you put mushroom material into a landfill, she said, it will help make the landfill smaller.

If the world is looking for a more sustainable future with less plastic and fewer landfills, the answer, according to Ayers, is mushrooms.

The Central Community College-Kearney student’s “obsession” with mushrooms actually only started in the last year, and it has since guided her life.

Ayers is pursuing an associate of science degree, but she said a year ago she had no real plan for what area she specifically wanted to pursue. It wasn’t until she was assigned to watch a documentary for a class that her passion began to spawn.

“The more I found out, the deeper I got,” she said.

The documentary, “Super Fungi,” showcased the various ways mushrooms are utilized in today’s world. Currently, mushrooms are being engineered into everything from cleaning products to cancer medications, and someday, Ayers hypothesized, they could even replace plastic.

“NASA built a drone out of it,” Ayers added. “So, when it crashes, nobody knows that we’re spying on them because it disintegrates.” According to the Washington Post, a team of college students led by one of NASA’s synthetic biology experts completed a successful test flight in 2014.

Specifically, these solid objects, including the drone and Ayers’ boat, are made from mycelium, the mulch-like substance that stays under the ground. The mushrooms that pop up in one’s yard or are used to fill ravioli are actually the fruit of the mushroom mycelium.

After learning about everything that could be made out of mycelium, Ayers wanted to try it herself.

To grow a boat

Ayers sent Ash Gordon, the owner of Nebraska Mushroom LLC in Grand Island, an email hoping to buy some materials for the boat and see if he had any advice. Instead, he offered her a job.

“I offered to help for free because I just wanted to be around it, but naturally, he wanted to pay me,” Ayers said.

Funding for the boat also came from a Central Community College mini-grant.

Initially, Ayers had plans to build a fort out of mycelium because of its insulating qualities. But then she realized that since mycelium is both buoyant and waterproof, she’d try to showcase that through a boat.

To start, Ayers made her own “steam table” using a $70 wood steamer and a downspout, which she used to steam the base wood and craft it into a boat shape. Then, she made a top and bottom mold out of papier-mache, using old copies of the Kearney Hub and Grand Island Independent.

However, she then realized the papier-mache wouldn’t be strong enough to hold all of the materials. So she built what she calls a “canoe hammock” to suspend the boat materials as the mycelium grew.

She stuffed mycelium into the mold, watched and waited.

The process of growing the boat only took 14 days. On Tuesday, the boat was sitting outside the Grand Island mushroom farm building to dry and stop the growth.

In the end, the mycelium ended up eating through the top papier-mache mold, even though Ayers said it had been covered with five coats of clear paint.

Ayers is confident that the finished boat should be able to sustain a trip down the river.

She anticipates taking the Platte River journey about a week after the state fair. Though she’s confident her creation should hold together all the way to Bassway Strip State Wildlife Management Area, she’s taking two friends in canoes with her and wearing a life jacket.

Though fun, the trip still will be an experiment. She’s planning to weigh the boat before and after the trip, to see if it absorbs any water, confirming how successful the mycelium was as a material.

Before Ayers takes her experiment to test the waters, though, she’s going to show it off at the state fair.

The canoe will be on display at the fair’s Sustainability Pavilion for attendees to see. Ayers and Gordon also will give a presentation about the process of growing a boat from 1-1:30 p.m. Aug. 24.

Ayers’ goal is to inspire the same enthusiasm she discovered for fungi.

“I want to get people excited about mushrooms,” she said. “There’s so much to be excited for and so many different areas to go into.”

She added that the world of mushrooms is fairly unexplored, with few scientists holding doctorates in mycology — the study of mushrooms — and millions of species of fungi left to identify.

She also hopes to show the audience how easy it is to grow mushrooms and create their own unique structures.

Ayers and Gordon actually found themselves unable to stop after just growing a boat, and now they’re growing even more objects out of mycelium at the farm.

In addition to the finished boat, the two currently have a few pavers grown and drying, and they have an armchair growing in one of the greenhouses.

Ayers hopes to get even more ideas of items to grow through a suggestion box at the fair and soon start her own business growing things out of mushrooms.

Her endeavors with the boat, though, already have paid off.

“The fungus got me a scholarship to CCC (in Columbus) doing research that’s fully funded by the National Science Foundation. And it’s a full-ride scholarship, so food, books, everything is paid for, and I have to do research. But really, I get to do research,” she explained.

From there, Ayers plans to get a bachelor’s degree in science and sustainability, then a Ph.D. in mycology. “Then hopefully identify all of the Nebraska mushrooms that get kind of pushed under the rug.”

Already, she said she’s found mushrooms in the state that aren’t in any guidebooks, and sees mushrooms being used in endless ways all over Nebraska. For example, she says mushrooms could someday be used instead of septic tanks with beds grown near lots to catch runoff.

And that’s just the beginning.

“In 100 years, I think people will be growing their laptops out of it, and phone cases,” Ayers said. “It’ll take awhile, but it’ll get there.”

Expanded shuttle service and an incentive to use it were announced Wednesday because of limited parking on the Nebraska State Fairgrounds with this week’s continued wet weather. 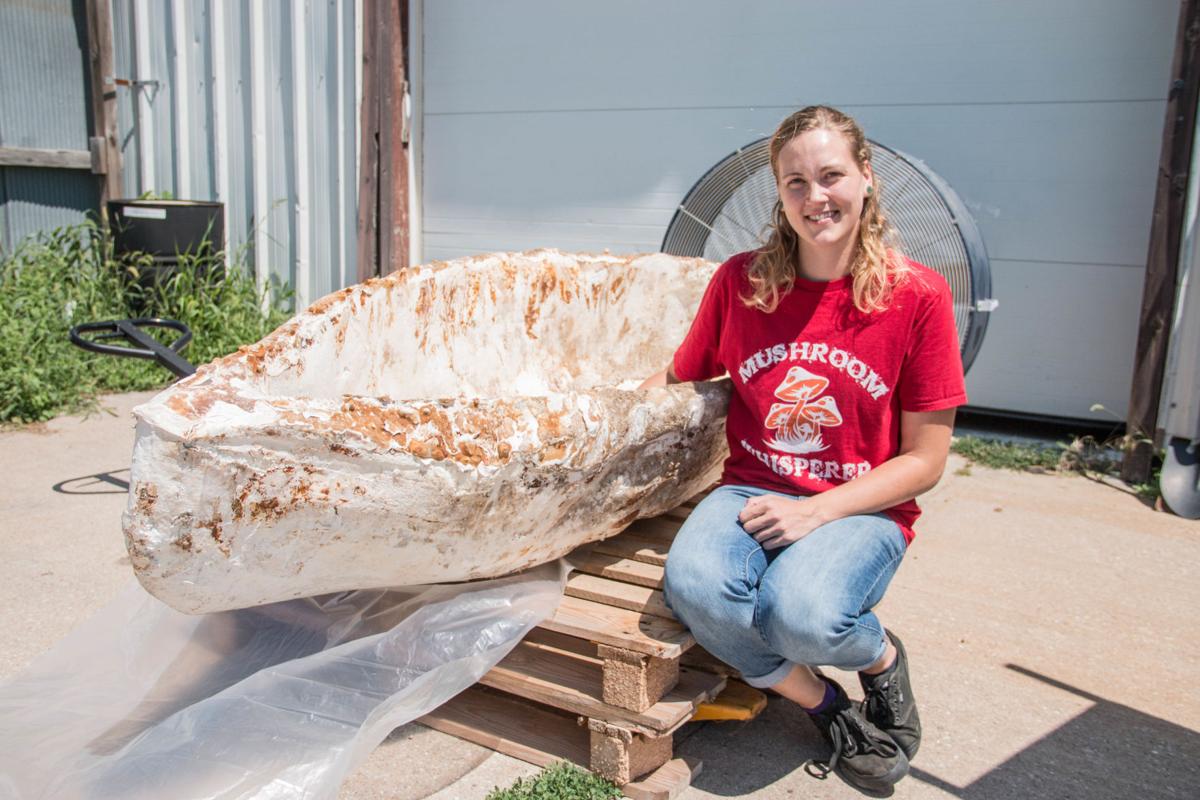 Mushroom enthusiast and Central Community College-Kearney student Katy Ayers sits with an arm inside of the boat she grew from mushroom mycelium. 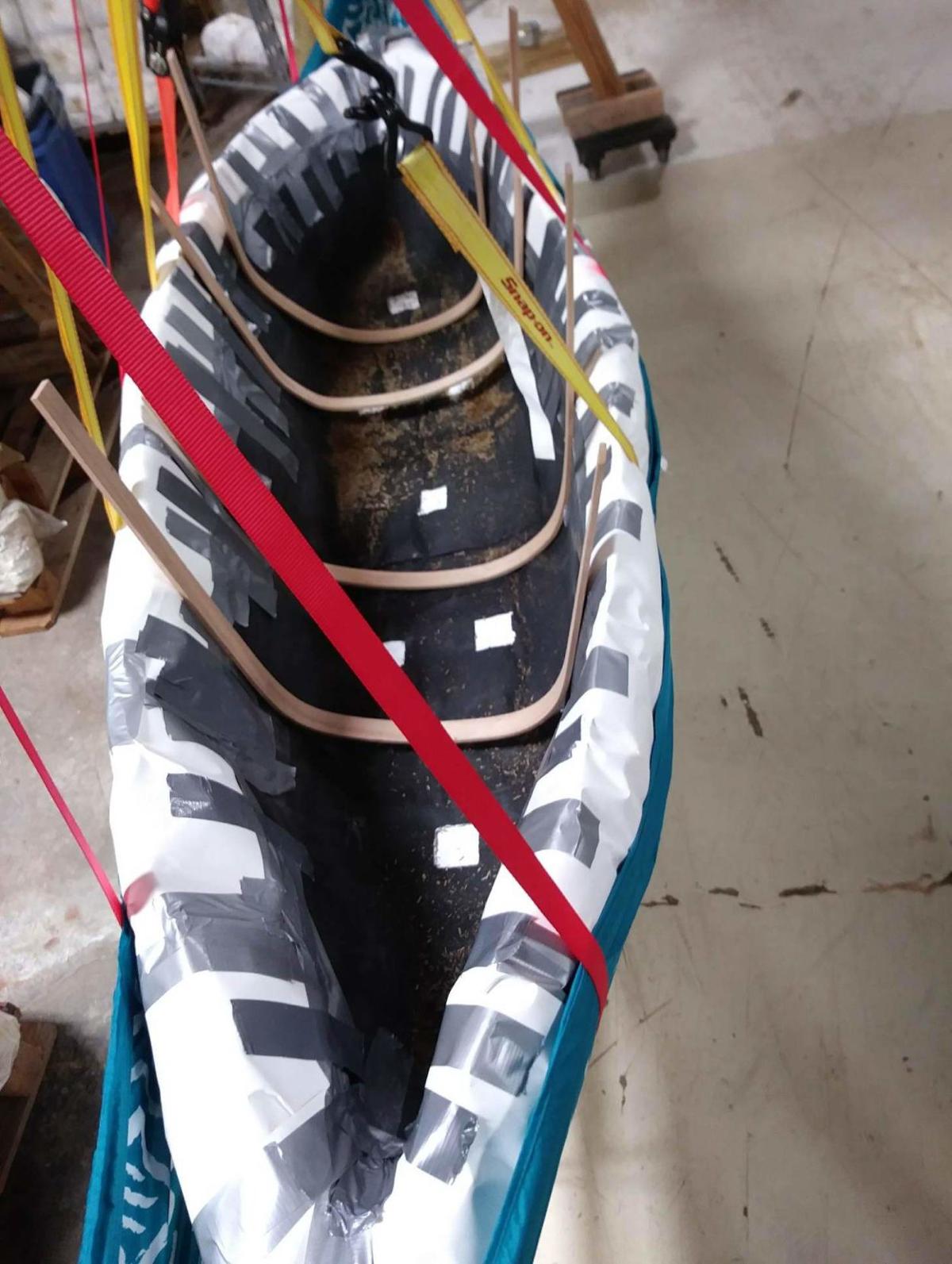 To grow the boat, Katy Ayers constructed a “boat hammock” that suspended the mushroom mycelium inside the mold, created out of papier-mache using old issues of the Kearney Hub and Grand Island Independent. 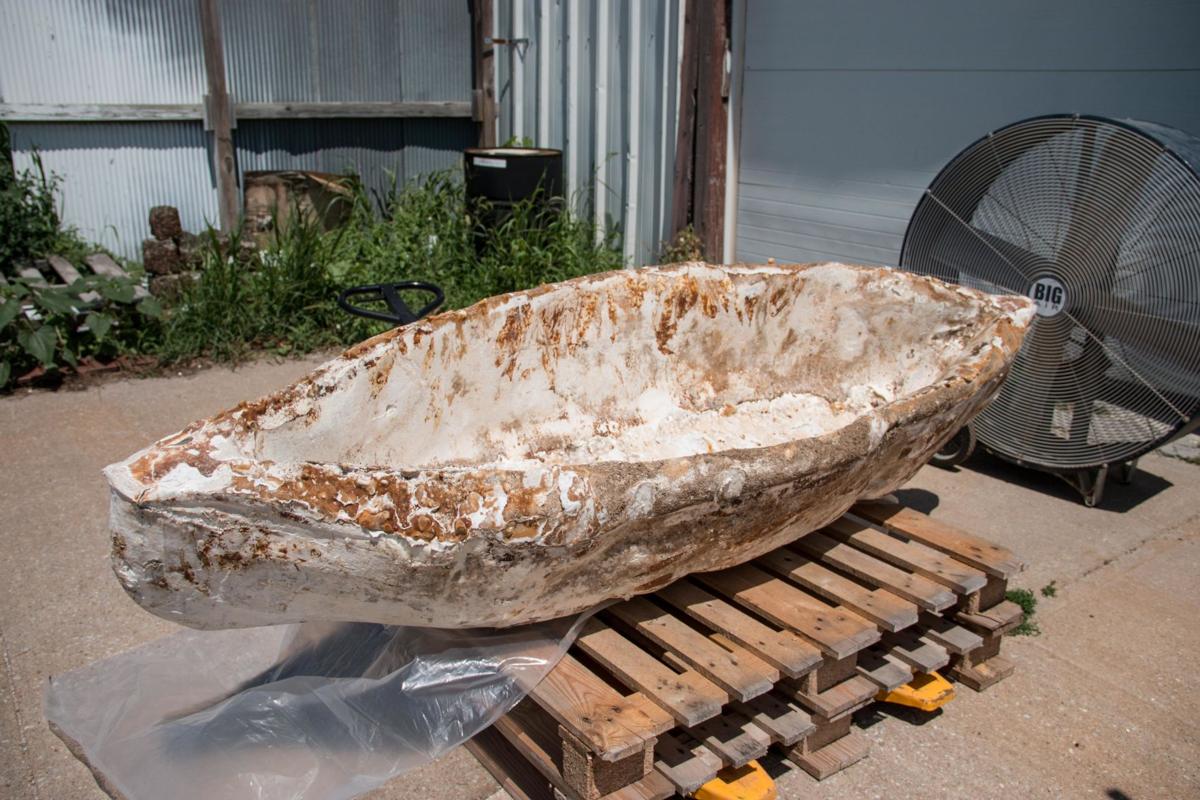 Tuesday, Katy Ayers’ mushroom mycelium boat was sitting outside Nebraska Mushroom LLC’s building to dry. Drying, Ayers said, stops the growth of the mushrooms and finishes the material so it’s resistant to water. 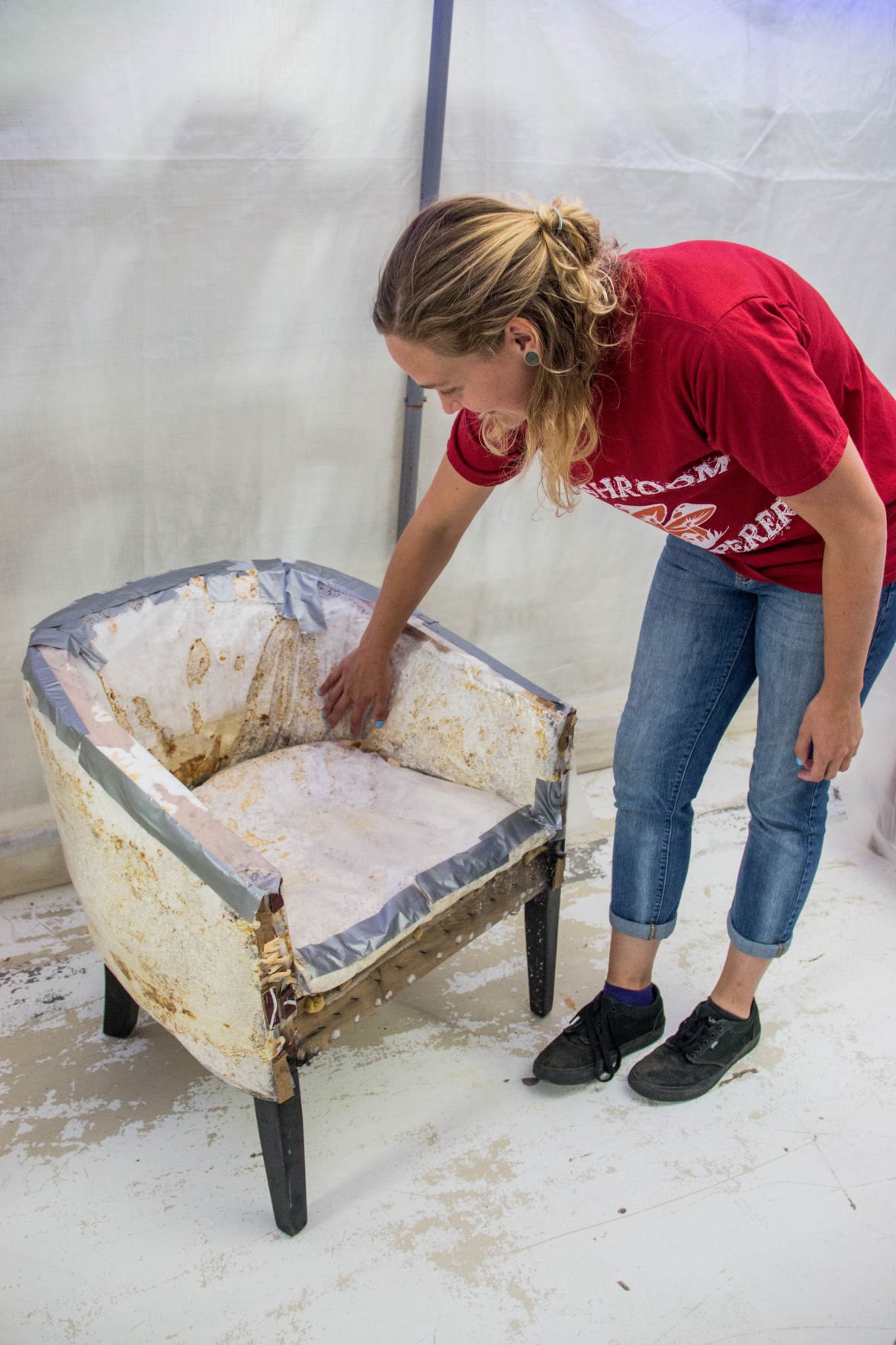