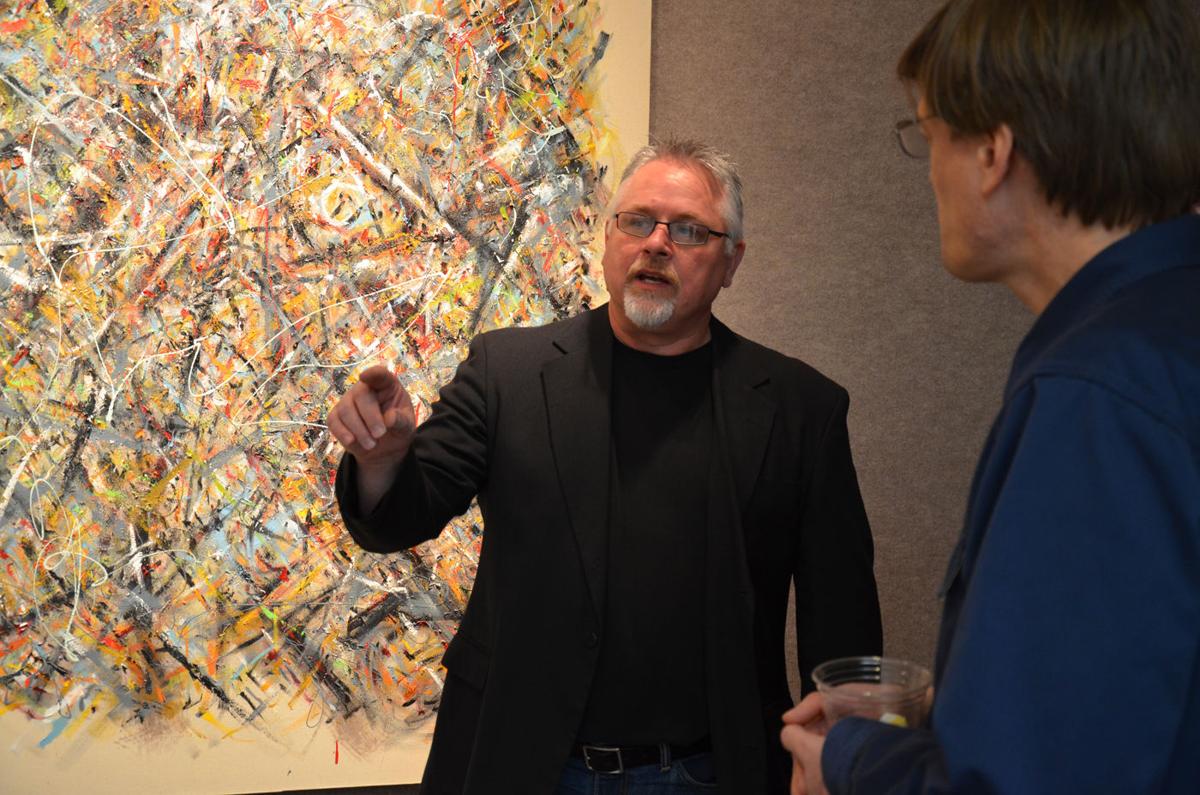 Artist Mark Hartman talks about his latest work after an artist reception Saturday at the Museum of Nebraska Art. His solo exhibit continues on display through July 3 in the Skylight Galley. 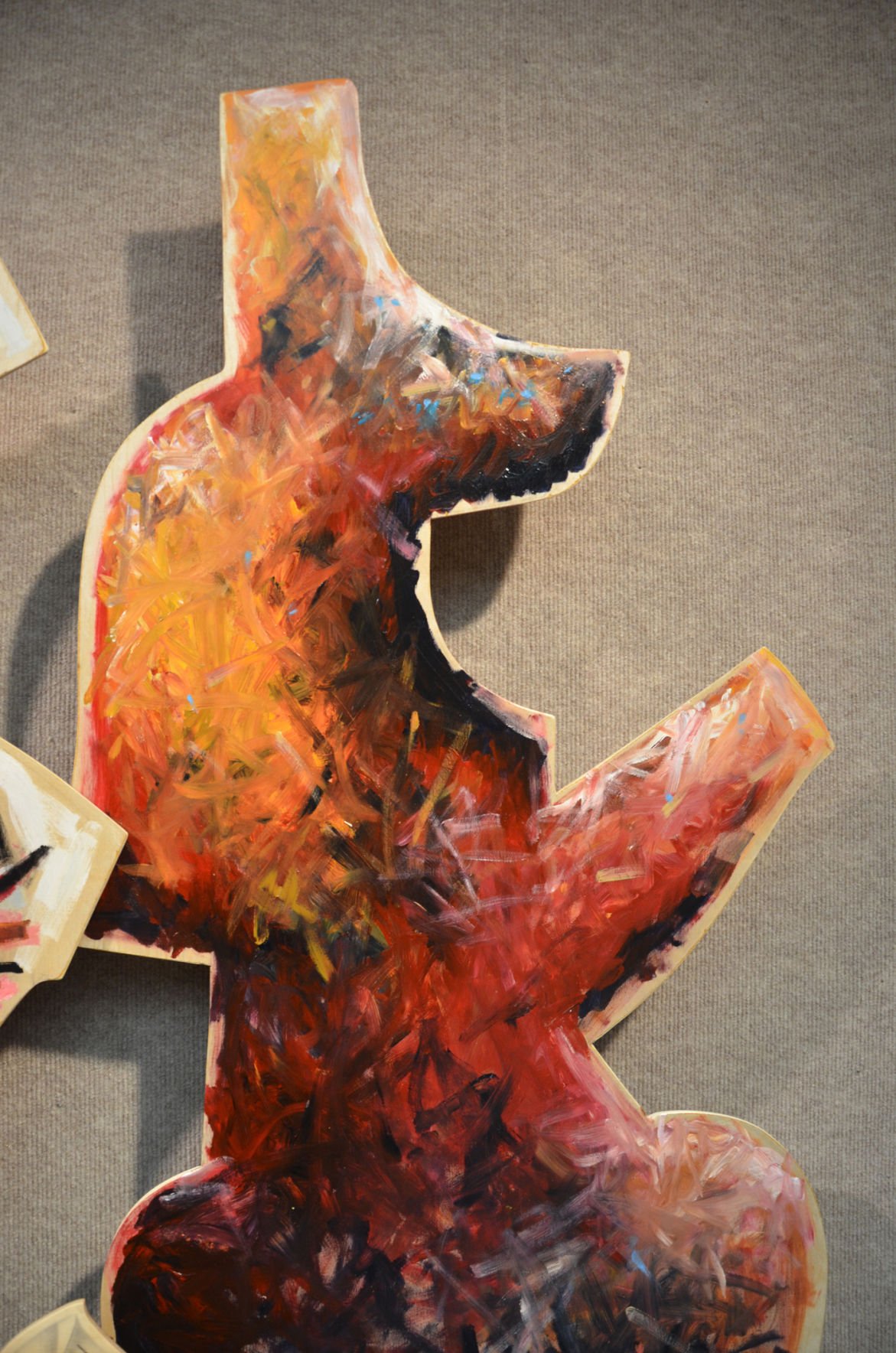 Detail of “The People,” 2016, acrylic on graphite on wood with embossed metal, collection of the artist. Hartman said this piece was inspired by Egyptian hieroglyphics.

KEARNEY — Mark Hartman credits the night sky as an influence on his pieces currently displayed at the Museum of Nebraska Art. The sky he remembers happened indoors.

“I worked at the Hastings Museum for six years as an exhibit designer and a planetarium guide,” Hartman said during an artist talk on Saturday at the opening of his show. “I did 400 to 500 star talks as a planetarium assistant. The Hastings Museum influenced my work here because it got me interested in natural and cultural history.”

The artist and University of Nebraska at Kearney associate professor of art used images from the night sky as starting points for pieces like “Taurus,” “Cosmos,” “Mars” and “The Golden Fleece,” all a departure from the rectangular, abstract work he’s made for years.

The result of Hartman’s recent work can be viewed in the show, “Nebraska Now: Mark Hartman, Paintings” that continues on display through July 3 at the Skylight Galley at the Museum of Nebraska Art. Admission to the museum is free.

Curator Teliza V. Rodriguez describes the work as “wall pieces that incorporate paints, metal embossing and cut shapes. Influenced by the work of Frank Stella, Eddie Dominguez and Paul Rand as well as elements of graphic design, the objects dispel with ‘frames, rectangles and canvas.’”

Hartman credits the curator with moving him in a new direction for his art.

“Teliza came by for a studio visit and kicked my feet out from underneath me,” Hartman said. “She said to me, ‘I don’t think this is honest. Do you?’ I wanted to do something totally new for MONA. I didn’t want to keep making rectangles. I’d been doing that for 15 or 20 years.”

The visit forced Hartman to take an objective look at this work.

“I felt like I needed to move to something different,” he said. “I don’t know exactly what Teliza said, but what I got out of it was: Are you going to do something about you or are you going to make art that you think people want to see? That was one of those pivotal moments.”

Conversations with his wife, Melissa Hartman, reinforced the message.

“I trust her judgment a lot,” he said. “So six months ago, I started — almost — all over again. I sat down and I asked myself, how do I do this?”

He wanted to strip away everything about his artwork, except for the core. He also wanted to make art that felt less by Plato and more like Shakespeare.

“I started thinking about how people find images in things,” Hartman said. “In the constellations, people drew pictures of the stars. Most of the time, whey you look at it, you might think, how in the world did they get that idea? But they did and it explained their mythos.”

In his artist statement, Hartman acknowledges the importance of art in his life.

“We wander through ways of expressing and eventually find place to revisit,” he writes. “Painting and drawing have been those places for me. I respect the demands of physical media. The interactions are more direct, engaging. One must be present with this work.”

Leaving the rectangles of his dimensioned work behind, Hartman said he looks forward to working with irregular shapes and including more wood construction in his pieces — while still respecting the tactile surface of the paintings.

When: On display through July 3

Where: Museum of Nebraska Art at 2401 Central Ave.

On Tuesday, the Oscar-nominated star of movies like "Juno" and "X-Men: Days of Future Past" shared with fans that they are transgender and identify as non-binary.

'Saved by the Bell' rings again -- with a new generation

Bayside alumni update: Zack Morris is now the in-over-his-head governor of California. And the reimagined version of the show "is a single-camera, edgier comedy," Executive Producer Tracey Wigfield says.

The Talbott Brothers plan to perform music from “Ghost Talker,” the duo’s latest collection of music, along with songs from “Gray,” their 2017 album, and even a few Christmas tunes.

People magazine reveals its '2020 People of the Year'

The four will be celebrated for their positive impact in the world during a challenging 2020.

'If it becomes a job, then it’s not as fun': Anita Trimble crafts cards as creative outlet

In addition to making cards, Trimble enjoys sharing her skills with other crafters and especially with residents of nursing homes and assisted living facilities.

The exhibit of artwork continues on display at the Minden Opera House Gallery through Dec. 31.

From “A Charlie Brown Christmas” to “Dolly Parton’s Christmas on the Square,” here is a peek inside the holiday TV snow globe.

Here's a collection curated by The Associated Press' entertainment journalists of what's arriving on TV, streaming services and music platforms this week.

World Wrestling Entertainment announced the death of Pat Patterson, who was a trailblazer in the world of WWE as the first openly gay wrestling star.

Artist Mark Hartman talks about his latest work after an artist reception Saturday at the Museum of Nebraska Art. His solo exhibit continues on display through July 3 in the Skylight Galley.

Detail of “The People,” 2016, acrylic on graphite on wood with embossed metal, collection of the artist. Hartman said this piece was inspired by Egyptian hieroglyphics.