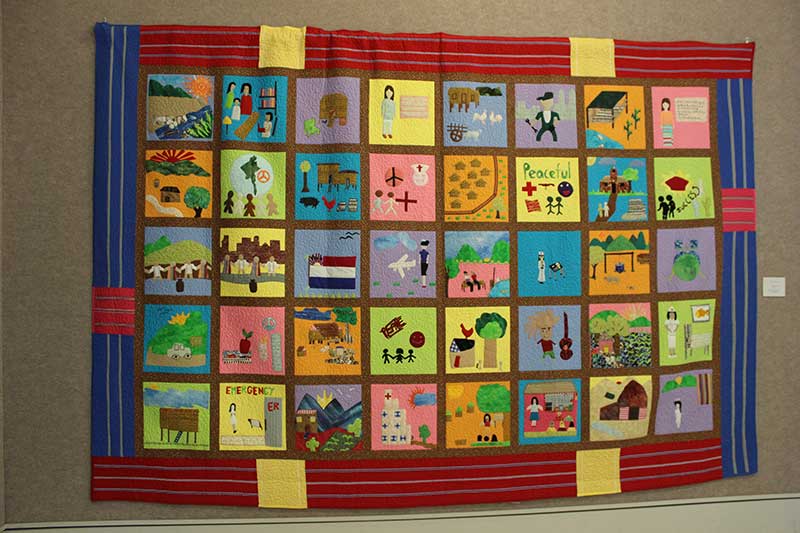 This quilt is a result of The Quilted Conscience project that took place at Lincoln Public Schools. The quilt tells the story of Karen refugees who came to America to flee poverty, war and persecution. 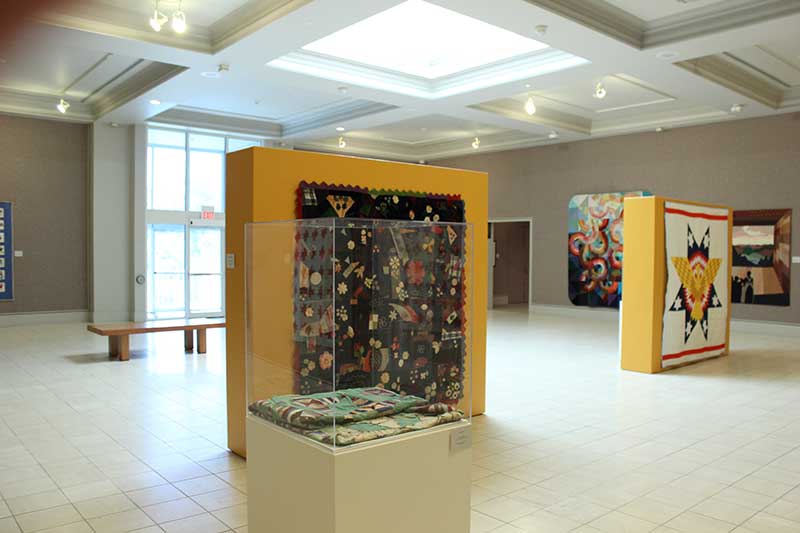 Nineteen quilts covering more than 100 years of Nebraska history are on display at the Museum of Nebraska Art. Quilts range in age from the early 1860s all the way up to 2010 with each decade in between being represented.

KEARNEY — Thinking back to the pioneers and their journeys, it is hard not to also think of the beautiful quilts these people created. Some were practical, simply for protection from the harsh wind, and some were ornate, used as decoration and a sign of status. But regardless of the use, quilts are undeniably a staple of living on the Great Plains.

It is from the prominence of quilts in Nebraska that MONA Curator Teliza Rodriguez decided to use them as a way of telling our state’s history. “Stitching Time: Over 100 Years of Quilts in Nebraska,” opened at the MONA June 6 and runs until Sept. 14.

“We wanted a quilt show to cover 100 years that spanned from the 19th to the 21st century,” Rodriguez said.

While there is at least one quilt from each decade over the time frame, some decades feature more than one.

“We wanted to get as many diverse quilts as possible,” Rodriguez said.

“One quilt is ornate and embellished, and has rich-looking tones and fabric. It’s clearly an heirloom of an upper-class family that was not used except for decoration. The other I pulled from 1910 is a newspaper quilt. The back is literally made with the Omaha World-Herald. Clearly it was used regularly by a low-income family. I liked the dichotomy,” Rodriguez said.

It is this kind of juxtaposition, and the diversity in the lives of those on the Great Plains that Rodriquez most enjoyed being able to portray with the quilts.

There are 19 quilts in the show. Five are being shown in vitrines as they could not be hung because of their delicate and aged nature. All of the quilts are on loan from different institutions around the state.

Organizations with quilts on loan include:

“We’ve never had so many different institutions working in partnership,” Rodriguez said.

A quilt created just recently in 2013 is also being featured. This quilt was made in Lincoln as a result of The Quilted Conscience Project. It was created from the dreams and memories of refugees from Karen.

John Sorensen, director of the project, originally created a film showcasing refugees from Sudan living in Grand Island. The project was focused around having the students connect with Grand Island residents through quilting about their pasts.

“These people may look very different from us, but they came to America for some of the same reasons — war, famine, a better life, all things your white, German grandparents many have come here for,” Sorensen said.

Because of the meaningful relationships the students and the teachers formed, the project has been replicated at different schools, which is how LPS created their own quilt.

Sorensen will be at MONA at 2 p.m. July 30 to give an introduction to his film and discuss the importance of the quilts on display.

“When looking at the quilts you can feel the hand of artists. I think story quilts touch the audience because the story quilts were touched by the artists,” Sorensen said. “There’s something permanent and very compassionate about it like a hug, which these younger people that have underwent such stress direly need.”

Not only are the stories of local refugees told in this quilt, but the diverse story of how Nebraska has become the state it is today is shown in the fabric of all the quilts on display. Experience these stories in the East Gallery at MONA. MONA is open Tuesday through Saturday from 11 a.m. to 5 p.m. and Sunday from 1 to 5 p.m.

When: Exhibition runs until Sept. 14

Meghan reveals she had suicidal thoughts

Although they don’t feel that there have been big differences in their lives since the show started, they have changed. Being constantly followed and recorded has made them more mindful about everything they do.

Harry, Meghan to delve into tough royal split with Oprah

The time has finally come for audiences to hear Meghan and Harry describe the backstory and effects of their tumultuous split from royal life.

Print only: The Carillon publishing students' prose since 1986

KEARNEY — Tyler Jacobs appreciates the value of the printed word.

KEARNEY — For anyone who wonders about the lure of the open road, someone like Fern answers that call.

Bunny Wailer, a reggae luminary who was the last surviving member of the legendary group The Wailers, died Tuesday in his native Jamaica. He was 73.

Palace to investigate after Meghan accused of bullying staff

LONDON (AP) — Buckingham Palace said Wednesday it was launching an investigation after a newspaper reported that a former aide had made a bullying allegation against the Duchess of Sussex.

“I know our community and our school, we have a story to tell,” Jeremiah Johnson says. “This is a film crew that’s not from here, and I wasn’t too sure how they were going to tell our story. I think they told our story very well.”

How much do you know about St. Patrick's Day?

When most people hear "St. Patrick's Day" they usually associate the Irish holiday with shamrocks, drinking, and all things green. Not many know about the history behind the 5th century Christian missionary, St. Patrick and his contributions to Ireland. Test your knowledge and perhaps learn something new about this traditional Irish celebration!

The 'Nomadland' life: 'It's hard but it's healing,' says Bob Wells

For the real-life van dwellers who appear in “Nomadland,” life hasn’t changed drastically since the film was released.

This quilt is a result of The Quilted Conscience project that took place at Lincoln Public Schools. The quilt tells the story of Karen refugees who came to America to flee poverty, war and persecution.

Nineteen quilts covering more than 100 years of Nebraska history are on display at the Museum of Nebraska Art. Quilts range in age from the early 1860s all the way up to 2010 with each decade in between being represented.