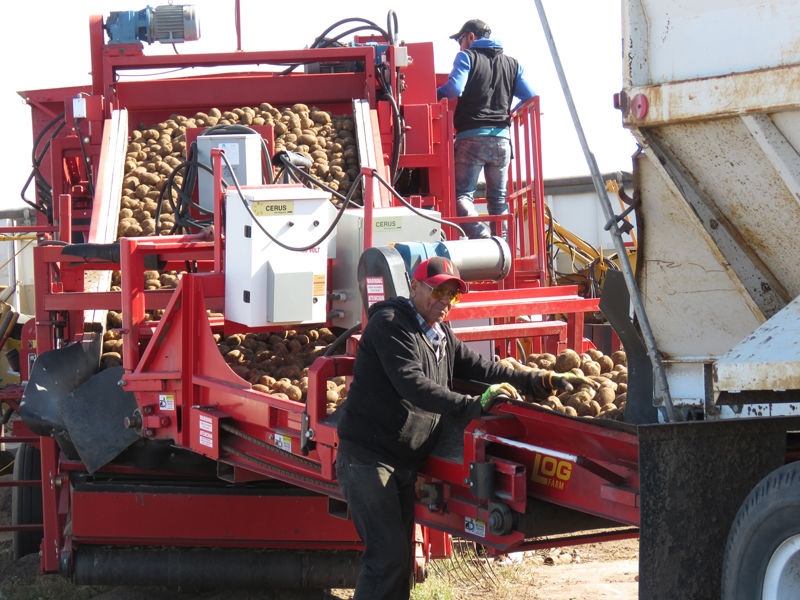 Initial sorting of plant material and damaged potatoes is done at the field. Potatoes are unloaded from truck trailers onto this conveyor for hand sorting and then roll through a small sort house staffed by four harvest season workers. They then are reloaded on trailers for transport to the warehouse. 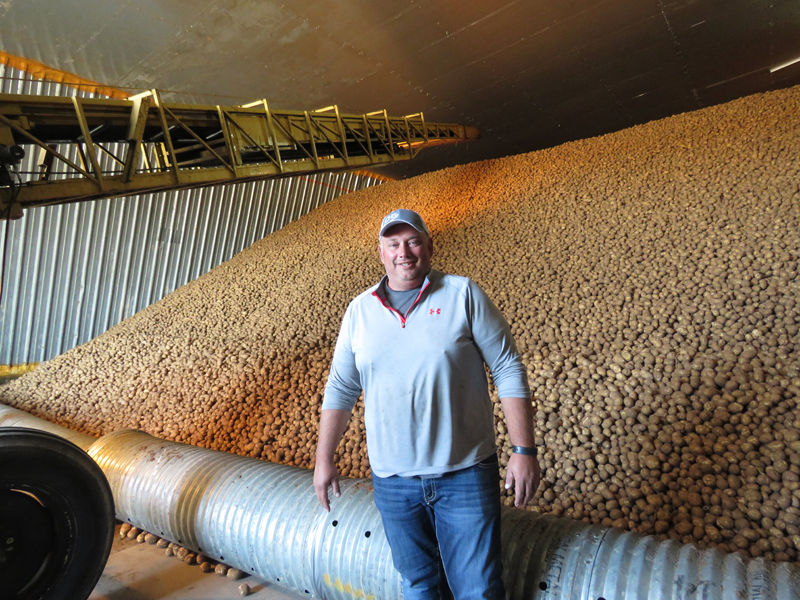 A mountain of chip potatoes harvested from fields south of the Platte River between Odessa and Gibbon grows Sunday afternoon in a CSS Farms warehouse north of Minden. Farm manager Ben Zechmann and his employees are racing to finish harvest before Thursday night’s first hard freeze of the fall. See more photos and a video at kearneyhub.com.

MINDEN — Ben Zechmann doesn’t need a calendar to remind him that Oct. 10 is his most important workday when growing chip potatoes. It’s always on his mind.

Zechmann is manager of CSS Farms’ Minden site and oversees annual production of up to 80 million pounds of potatoes in the Central Platte Valley. Ninety percent will go to the Frito-Lay processing plant in Topeka, Kan.

He knows harvest must be done by Oct. 10, the average date for the first hard freeze in the region. In some years, including 2019, it’s the exact date.

A National Weather Service forecast for low temperatures of 27 degrees Thursday night and 26 degrees Friday night means Zechmann and his harvest crew are racing to dig the last potatoes from 1,550 acres of sandy soils south of the Platte River between Odessa and Gibbon.

“That cold of weather will kill us,” he said. “The potatoes will get frozen. They’ll look fine going into storage and then, a week later, they’ll just all rot.”

As he watched one of the two CSS Farms harvest crews dig and process potatoes Sunday in a field east of CSS Farms’ warehouses along Highway 10 north of Minden, Zechmann knew a big job was ahead to save all of this year’s crop.

“It has to be out of the ground by Thursday evening,” he said. “That’s gonna be a push, considering we’ve done a thousand acres the past two weeks and in the next four days we gotta get 500 done.”

That’s four long days to make up for a 2019 harvest that started a week later than the usual Sept. 15 because the weather and potatoes were too hot. “We’d been running about eight-hour shifts, which is not enough to get done on time,” Zechmann said, so the crews were working 15-hour days by the weekend.

Harvest usually starts when potato temperatures reach 50-60 degrees. The goal is to dig them when they’re not too hot or too cold, as long as harvest isn’t too far behind.

“I’ve thrown away my thermometer,” Zechmann said, because of the urgency of finishing before another Oct. 10 freeze.

The 2019 growing season started with only minor weather challenges. “Planting was slightly delayed by cold temperatures, but only about a week, which was no big deal,” Zechmann said.

There were no effects from March flooding because the sandy soils in fields in the few miles south of the river are “fairly forgiving” of wet weather that can keep other fields wetter longer. The potato acres are leased from area farmers.

Planting goals are to produce the 80 million pounds of potatoes needed to fill the climate-controlled warehouses. The stored potatoes are trucked to the Frito-Lay plant from mid-November to mid-May.

“Essentially, anytime from the end of July through the middle of May, if you buy those potato chips in Kearney and the surrounding areas, really from about North Platte east to just past Omaha and north and south about the same distance, those potatoes came from our farm or our sister farm in Columbus,” Zechmann said.

Six varieties were planted last spring and each is managed, harvested and stored separately. Zechmann’s full-time employees include agronomists who constantly monitor conditions in the individual fields to determine how much water, nutrients, fungicides and insecticides to apply, the timing and the method used.

In warehouses, lasers measure potato depths and adjust the “pilers” speed. Heat, water, carbon dioxide and air flow are measured and managed, and temperatures at the bottom of piles can be controlled to within 0.10 of a degree.

“We don’t shoot from the hip on anything ...,” Zechmann said. “We test and then decide based on the test.”

“We want to make the whole field 100 percent great. Even then, you have some yucky spots,” Zechmann said.

This year’s crop-damaging weather didn’t catch up with the potato crop until after Independence Day.

“Everything looked good. We thought we would have bin-busting yields,” Zechmann said. “It was just looking great. And then it rained a whole bunch.”

CSS fields avoided immediate effects from the July 8-9 downpours that flooded south Kearney and other areas along Platte River tributaries.

“Then, Dry Creek flooded a day and a half later,” Zechmann said, and halves of two potato fields were lost, approximately 120 acres. Then the creek broke through its banks and carved a new channel into Lost Creek, affecting another 20 acres.

He said the overall loss to flooding was nearly 10 percent of the 1,550 acres planted.

“The water table rose so high I had flowing water in that field into the second week of August,” Zechmann said about a site east of the Funk-Odessa road. He said the landowner had never seen anything like it.

Zechmann’s initial “holy cow” reaction when observing the flooding from an airplane window two days later was tempered by seeing much worse damage on his neighbors’ fields.

He said another weather issue was the 6 percent-10 percent less sunlight during the potato “bulking” — fourth growth — stage in July and August. So fields not flooded still may have yield losses of up to 10 percent.

“We will not fill (the warehouses) this year,” Zechmann said.

When asked if the only thing to do now is hope for better weather next year, he replied, “We can absorb a loss like this once or twice. We can’t string a bunch of them together.”

Development of the CSS Farms site north of Minden — south of the Highways 10 and 50A intersection — started in 1996, with more storage built in 1998, and reconstruction and additions after a 2012 fire.

Qualities for chips — less than 4 inches in diameter, round, bright white, thin-skinned and higher specific gravity (solids to water)

Destinations — 90 percent to a Frito-Lay chip plant in Topeka; 10 percent to other plants

Watch Now: Seniors struggle to get the vaccine

Watch Now: Seniors struggle to get the vaccine

Finding farm help an issue for many ag production businesses, including CSS Farms

Initial sorting of plant material and damaged potatoes is done at the field. Potatoes are unloaded from truck trailers onto this conveyor for hand sorting and then roll through a small sort house staffed by four harvest season workers. They then are reloaded on trailers for transport to the warehouse.

A mountain of chip potatoes harvested from fields south of the Platte River between Odessa and Gibbon grows Sunday afternoon in a CSS Farms warehouse north of Minden. Farm manager Ben Zechmann and his employees are racing to finish harvest before Thursday night’s first hard freeze of the fall. See more photos and a video at kearneyhub.com.