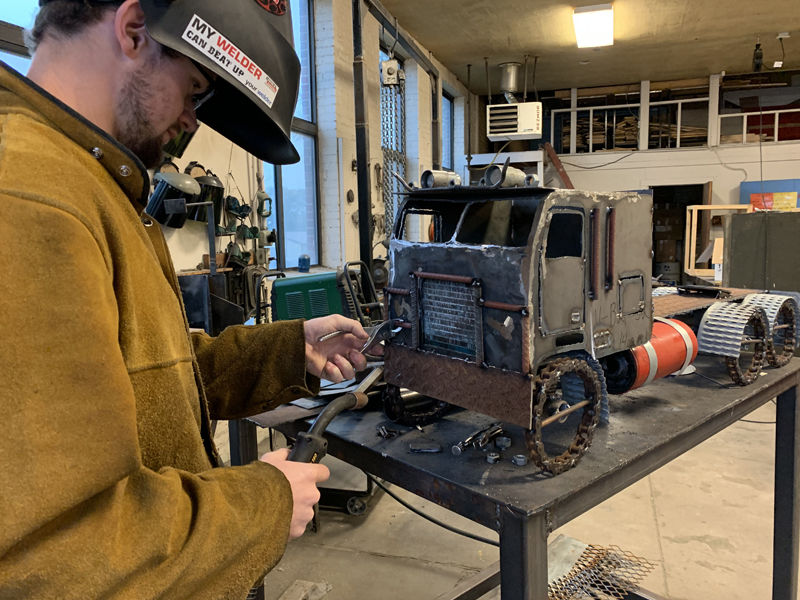 Parker welds a 4-foot by 18-inch tall 3D art semi truck with scrap metal. He won third place at the first ever Fort Kearny Conference Art competition this year with the 94-pound piece. 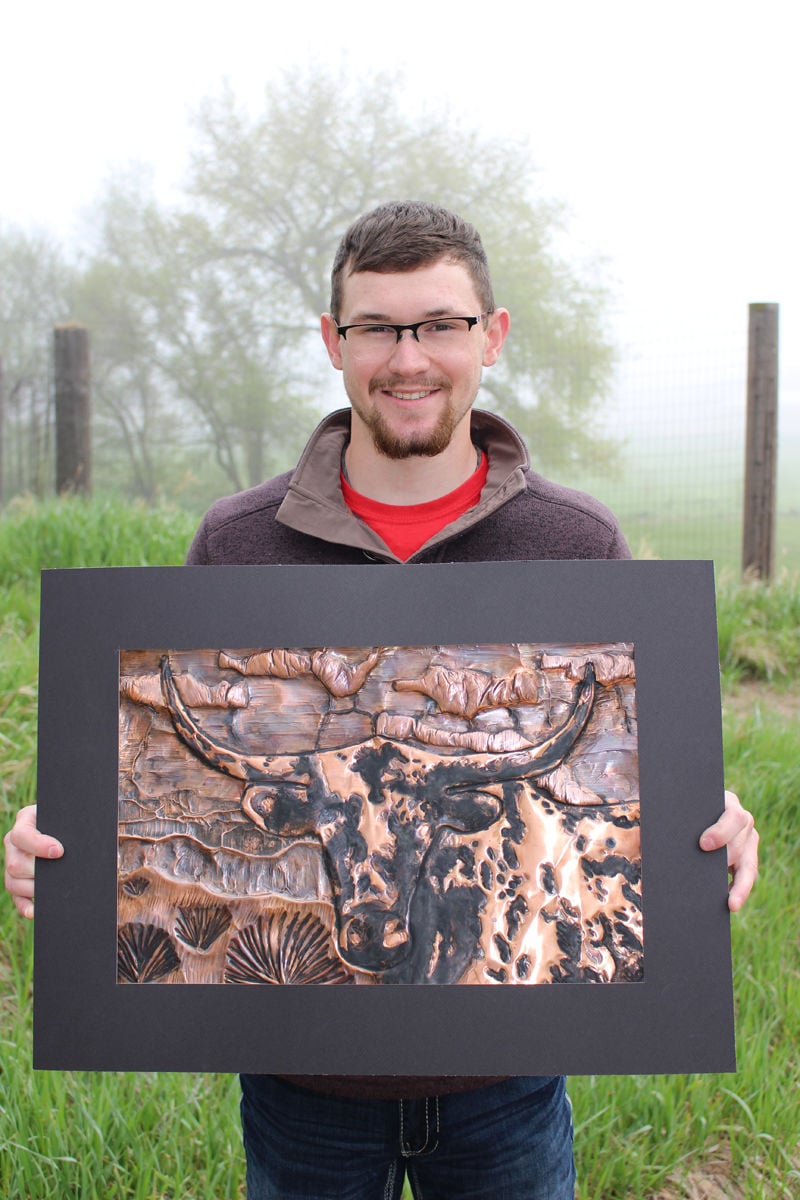 Litchfield High School graduate Parker LeFever won first place in the Congressional Art Competition for the 3rd District of Nebraska with “Unique Longhorn” on gage sheet metal. The piece will be hung in the U.S. Capitol building for one year.

He won small awards at different art shows around the state. But it’s his first, first-place award in the Congressional Art Competition for the 3rd District of Nebraska he’s most proud of.

“I was just so excited to see him win a big award. ‘See, you are awesome. Like, your art is fabulous,’” said Allison Varah, LeFever’s art teacher. “It is nice to see him recognized for all of his efforts because he has really always put in 100 percent effort.”

In September, he will attend a ceremony at the U.S. Capitol in Washington, D.C., where his art will be hung for a year. As a winner of the art competition, LeFever gets two free tickets to the ceremony.

The ceremony was postponed from July because of the COVID-19 pandemic.

“I’ve never been to D.C. I’ve never really been on any trips because we never go anywhere as a family. So I think that will be kind of cool,” he said.

LeFever’s 18-by-12 inch Longhorn cow design on copper is stunning, Varah said, much because it was mastered creating a patina with the chemical, liver of sulfur.

“He got really good at putting different amounts, diluting the liver of sulfur with more or less water so that it gets that really, really black. Or there’s a middle ground where you get a lot of different colors,” she said.

Before starting the project, LeFever drew a longhorn, and planned how he would distress, or patina, the metal.

“He’s very type A. He draws it out,” Varah said. “He pretty much knows what it’s going to look like, unless for some reason something doesn’t look quite like he wants it… he’ll change it a little bit.”

Once a plan was in place, LeFever pressed his design into the metal with the end of a pencil. The technique leaves a mark, “like you’re writing on a piece of paper but it’s actually engraved in it,” he said.

LeFever also pressed clouds into the sky, creating crevices that look like lightning. “I was like, ‘Oh, that’s kind of neat.’ I didn’t do it on purpose. It was an accident,” he said.

With permission, LeFever used metal from a local farmer’s iron pile for the project.

“I got a sheet of metal from him and put a rear suspension on it, so I got springs. I cut them to be about three inches. Just random stuff, oil filters for the gas tanks, pipe smoke stacks. It’s kind of neat,” LeFever said.

The pieces were welded together in the school shop room where he took classes, and decided he wanted to make welding a career. In the fall he will enroll in welding at Central Community College in Grand Island.

LeFever doesn’t plan to give up art, though. He is currently making exact replicas of his winning “Unique Longhorn” for people who want to buy the piece.

The original will hang at his house.

“So he was kind of thinking it’s something he could just do at home while he’s not working,” Varah said of LeFever’s artwork. “It will be a nice little side business for him.

“So that’s exciting that the kids can actually make some real money with art.”

KCHS grad Christina Arram considers purpose of everything, from sports to business, to be relationships

KEARNEY — If anyone understands the phrase “There’s no ‘I’ in team," it’s Christina Arram.

AXTELL — Nicole Cederburg spent the end of her senior year at Axtell High School not in a classroom, but in the field with her dad.

Bertrand grad Cailey Grabenstein persevered through muscle syndrome to do what she loved most: ride

BERTRAND — During her second year of 4-H and with a broken foot, Cailey Grabenstein showed her horse.

Ben Crocker, 8th of his siblings to graduate KHS, happy to follow in family's footsteps

KEARNEY — Not only is Ben Crocker the last kid to leave the nest, but he is also the eighth.

Ashton Masek used her experiences at KHS as stepping-stone to follow her passion: art

KEARNEY — When it comes to creative and pragmatic thinking, Ashton Masek has the best of both worlds.

KEARNEY — Nicole Messbarger knows that sometimes in life, you’ll get bucked off the horse.

Parker welds a 4-foot by 18-inch tall 3D art semi truck with scrap metal. He won third place at the first ever Fort Kearny Conference Art competition this year with the 94-pound piece.

Litchfield High School graduate Parker LeFever won first place in the Congressional Art Competition for the 3rd District of Nebraska with “Unique Longhorn” on gage sheet metal. The piece will be hung in the U.S. Capitol building for one year.