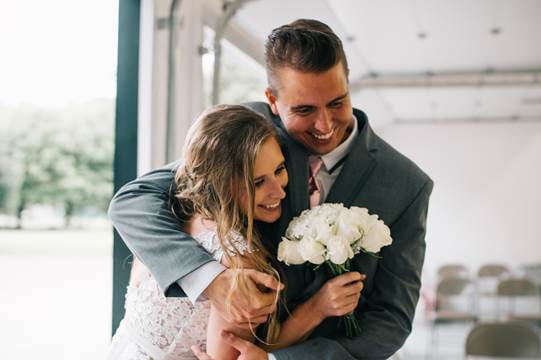 Liam and Lisa were married in a friend’s backyard on July 2, 2016, in Kearney. 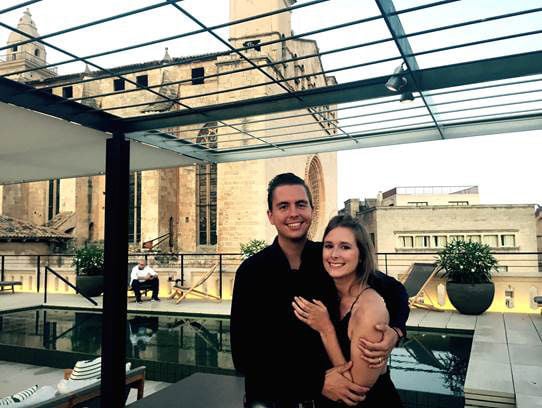 Liam and Lisa pose on the rooftop restaurant in Palma, Mallorca, after they got engaged in the summer of 2015. 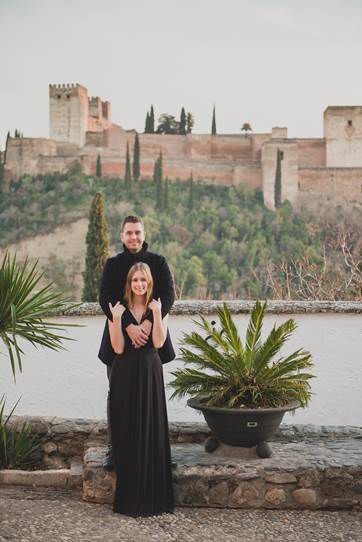 When Lisa went to Granada, Spain, in early 2013, she met Liam Mendoza at a party. That is Granada behind them. 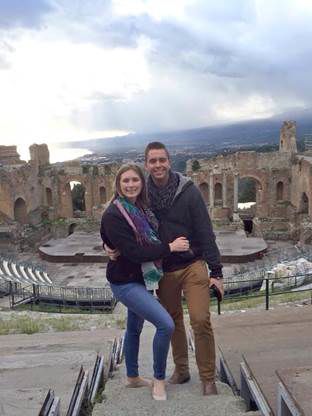 The couple visited Taormina, Sicily, in early January 2015. After that trip, Lisa knew she wanted to marry Liam.

KEARNEY — Lisa Klingelhoefer was unsettled after graduating from the University of Nebraska at Kearney in December 2013, so when friends invited her to come to Granada, Spain, for three months, she went. She had no plans except to learn a little Spanish.

Thanks to that language deficiency, she fell in love.

On Valentine’s Day 2014, she met the man she would marry.

When Klingelhoefer got to Granada, her friends there, whom she knew from a UNK study-abroad program in Olomouc, the Czech Republic, had left for jobs in other cities. Only one friend remained. Lisa spoke no Spanish.

She was the only non-local at that crowded party. Soon, her friend left. “They knew Liam Mendoza spoke a little English, so they passed me off to Liam,” she said.

The two began to talk. They talked for three hours. “He had the biggest smile. He was super nice,” Lisa said.

As the party broke up, Liam invited her to join his friends at a club. He paid her entry fee, but when he met up with his friends, she left. He offered to walk her home, but she declined. As she walked home alone, she thought about him: “He’s really nice. He was so polite. Something must be wrong.”

Liam remembers that evening a bit differently. “Suddenly a person we knew came in with Lisa. You could see from a mile away that Lisa was a foreigner,” he said.

Mendoza, a native of Marbella, Spain, is part foreigner, too. His father is Spanish. His mother is British. His grandfather is from Minnesota. At the party, he eavesdropped on Lisa as she chatted with others. He was curious. “I’ve been fluent in English all my life, and I used that card to my advantage,” he said.

When her friend left, Liam and Lisa began to talk. At 2 a.m., when their conversation ebbed, Liam invited her to go to a club.

He paid the “expensive” entry fee and bought her a drink. As they tried to cross the crowded dance floor, Lisa grabbed Liam’s hand to be sure she wouldn’t lose him. He was shocked.

“In Spain, holding someone’s hand is something you don’t do until you’ve been in a long relationship. I thought she was going way too fast,” he said.

He was shocked again when she left 10 minutes later. “I paid her entrance fee, but then she decided to leave,” he said. His friends were confused, too.

She returned to the U.S., but they kept in touch. Liam sent her photos of the Spanish coast. She sent him photos of Nebraska cornfields.

“He kept inviting me to visit him, but I was afraid he’d leave me at the bus station. I thought he was just a handsome Spaniard. He was too nice to be trusted,” Lisa said.

She played hard to get.

“Then Liam played hard to get, which I didn’t appreciate,” she said. Finally, she agreed to go to Spain for Christmas in 2014, followed by a week in Sicily and Italy. She was nervous.

“I thought, we’re going to really like each other or it’s not going to go too well,” she said.

“On our first ‘official’ dinner date in Spain, he tried to trick me into eating foie gras,” she said. She met Liam’s family, too. “She’s the only girl my grandparents ever met,” Liam said. “Obviously, there was something there.”

They kissed for the first time in the Malaga airport.

“After that trip, I knew he was the man I wanted to marry,” Lisa said. Their feelings deepened the following summer, when she spent three months with Liam in Mallorca, Spain, where he was managing four hotels.

He proposed that summer, 2015, at an outdoor restaurant on the roof of a hotel in Palma, Mallorca. “He kept walking around outside for a while,” said Lisa, who was confused. He told her he was waiting for their friends, but in reality, he was waiting for customers at that restaurant to leave so he could propose in a private setting.

“I cried,” she said. “We had talked about spending our lives together, but I had no idea a diamond was coming.”

That night, back at his apartment, he got down on his knee and proposed again.

“I told him to stop proposing because I couldn’t handle the tears,” she said.

She didn’t know that Liam had written a three-page letter to her father Mark before the proposal. He also had talked to Lisa’s mother, Janet Hageman, of Grant.

The couple decided to settle in the U.S.

Lisa, a 2009 graduate of Kearney High School, was finishing her master’s degree in social work at UNK. Liam’s master’s and bachelor’s degrees in hospitality/hotel management, his business experience and his extensive travels made him more adaptable.

As soon as she returned to the U.S., they hired an immigration lawyer. Liam needed a K-1 visa to enter the U.S. He obtained that in March 2016.

He arrived in the U.S. in May. If they didn’t marry within 90 days, Liam would be sent back to Spain, according to immigration laws.

On July 2, 2016, they married in a friend’s backyard on a rainy, 60-degree day. About 100 people attended. A pastor who is a family friend performed the ceremony.

Liam surprised Lisa with his great-grandmother’s wedding ring. Their rings are engraved with the day they met — Feb. 14, 2014 — and “juntos para siempre,” which means “always together.”

“It was very intimate. We asked people who meant a lot to us to bring things. Liam and his dad cooked food from around the world — Spanish, French, Greek, Italian, American,” Lisa said. She had made their wedding cake, but she forgot to take it out of the refrigerator, so it was never served.

“I was really happy. I cried. I sobbed so much that the pastor put his hand on my back and told me to breathe,” she said. “Liam is my world, my everything.”

They honeymooned briefly in Minnesota.

“It was short, but it was special just to be together. We weren’t oceans apart anymore,” said Lisa, a compliance manager at UNK.

In January 2017, as soon as he was authorized to work in the U.S., Liam became the operations manager at Angus restaurant and Sozo, which reopened as Joy’s Table last October. Both are owned by Dale and Shawna Klute. He loves his job and his coworkers.

“I’ve lived in big cities all my life. I had job offers on both coasts,” Liam said. “I’ve been lucky to travel a lot, so for me, a quiet town like Kearney is a good place to live and raise family.” He misses friends and family, but the couple travels to Spain every year.

In September 2018, they moved into a new home in Kearney with Luka, their Siberian husky puppy. Liam also has learned a new skill: scooping snow.

'I don’t do this for accolades': Martha Tiede knits baskets full of stocking caps for Kearney children

For the last four years, Martha Tiede has knitted baskets full of stocking caps for children at several elementary schools in Kearney, including Emerson and Kenwood.

The family of 6 boys lived in a 36-foot camper for about a year after the fire.

COVID-19 or something else? How coronavirus symptoms compare to other illnesses

Before 2020, you might not have worried much about a tickle in your throat or a little tightness in your chest. But that’s changed.

September's Yard of the Month filled with color

Lori Koeppe is the recipient of the Kearney Sertoma Club’s Yard of the Month award.

After reports of teen injuries and deaths, the FDA warned of "serious problems with high doses" of Benadryl in the "Benadryl Challenge" on TikTok.

A look at each state's best county to live in

What makes a county great? Take a good mix of outdoor activities and cultural attractions, throw in good schools, job opportunities, and affordable housing, and you'll likely have happy residents.

The 20 cities that have been taking the most road trips

Despite sharp declines in total travel since the COVID-19 pandemic, Americans have been taking significantly more long-distance road trips than in previous years.

Worried about income? Here are ideas for extra money

Are you concerned about your family’s income, as well as extended family members’ income? Here are some ideas for acquiring needed money.

The 15 cities with the most single parents

In spite of the strain experienced by many single parents, the percentage of single-parent households has tripled from less than 10 percent of families with children in 1950 to about 30 percent in 2019.

Liam and Lisa were married in a friend’s backyard on July 2, 2016, in Kearney.

Liam and Lisa pose on the rooftop restaurant in Palma, Mallorca, after they got engaged in the summer of 2015.

When Lisa went to Granada, Spain, in early 2013, she met Liam Mendoza at a party. That is Granada behind them.

The couple visited Taormina, Sicily, in early January 2015. After that trip, Lisa knew she wanted to marry Liam.