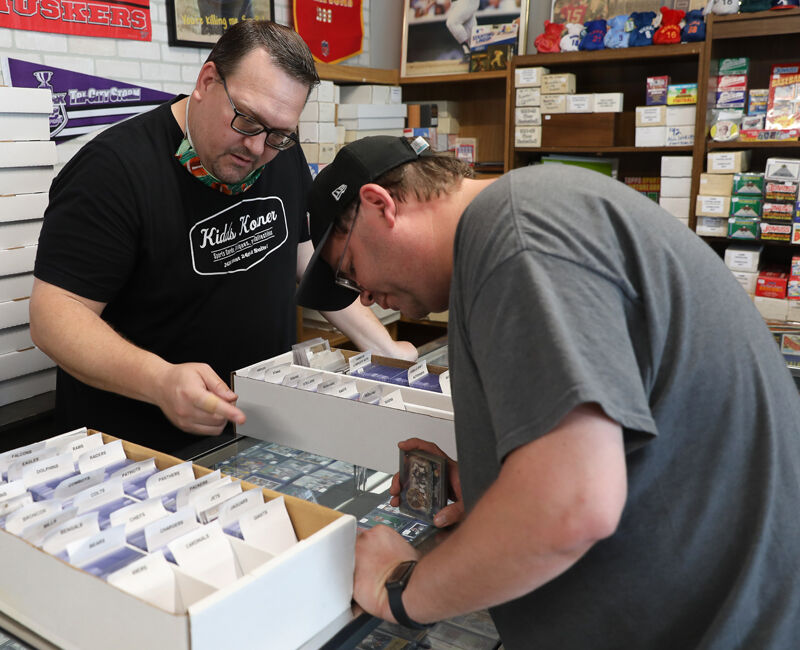 Kidds Korner owner Nick Kidd, left, talks about sports cards with customer Jason Brewster of Kearney. Kidd, a sports fanatic, loves talking about the teams and players with people who visit the shop. In January, he opened the store at 2424 W. 24th St., Suite 1, in Kearney and will have a grand opening on July 31. 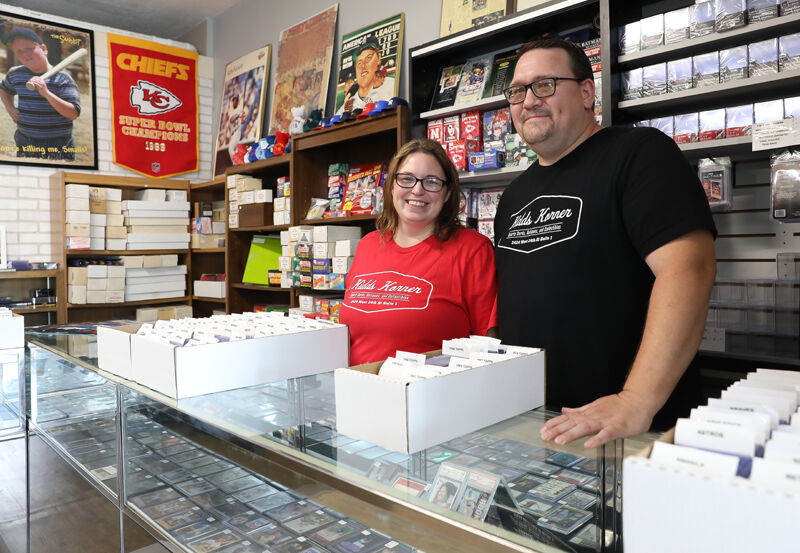 Jennifer Kidd, left, helps her husband Nick Kidd with his collectibles and antique shop when she isn’t working for Kearney Public Schools. 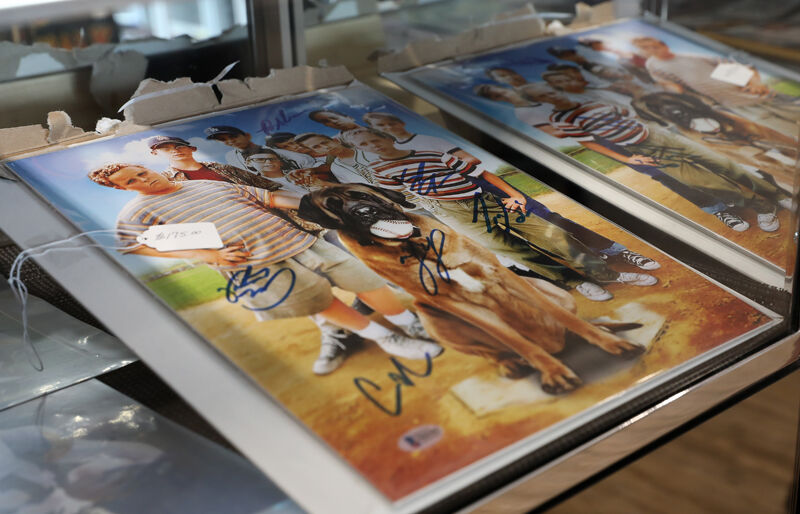 A poster of the cast from “The Sandlot,” Kidd’s favorite movie, is autographed by six of the cast members and is for sale at Kidds Korner. 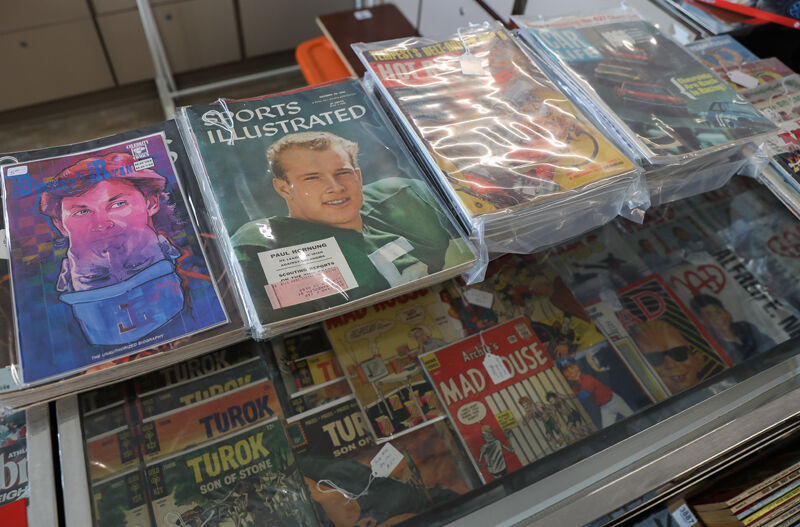 Kidds Korner in Kearney sells a variety of vintage and antique items including magazines, left, die-cast cars and sports cards.

KEARNEY — Nick Kidd, a big kid at heart, has been buying and selling sports cards since he was 12 years old.

“I’d buy collections out, piece them out and sell them and make profits,” Kidd said.

When Kidd was 10 years old, he tagged along with his mom Lyn Krabiel from their home in Hastings to antique shows in Lincoln where she sold antiques and collectibles. At 12, Kidd bought his first full set of sports cards from another dealer who wanted out of the business.

Kidd set up his own booth and sold cards from the collection. He said he made a profit his first weekend of sales. That profit helped him purchase more cards.

“I would buy packs (and) sell the cards out of it right away,” he said.

As Kidd grew older, he got into buying and selling Hot Wheels and Johnny Lightning toy cars.

“I found out how fun they were because if you can’t own a Corvette, at least you can own little Corvettes,” he said.

Now 40 and living in Kearney, Kidd is turning his passion for sports and nostalgia into a brick and mortar business at 2424 W. 24th St., Suite 1, in Kearney.

He named the shop Kidds Korner.

“You know the name fits me 100 percent. I am a very big kid at heart,” he said. “I love toys. I love cards. I love talking about cards with people.”

Kidd opened his store in January but quickly shut down in March because of the coronavirus pandemic. He reopened the shop in May and will have a grand opening and ribbon cutting at 1 p.m. July 31. Because Kidd also works as a supervisor at the Big Apple Fun Center in Kearney, his store hours are limited to 1-5 p.m. Sundays and Tuesdays, 1-6 p.m. Wednesdays through Fridays and 11 a.m.-6 p.m. Saturdays.

Along with the sports cards and vintage die-cast cars, Kidd sells comic books, Husker memorabilia, gaming cards, vintage toys and other antiques. Kidd’s mom, also now of Kearney, still buys and sells antiques, some of which are at Kidds Korner.

Kidd, who described himself as a “dog chasing a squirrel,” said he collects everything.

“I will go really hard on sports cards for a while,” he said. “Then, ‘Hey, I found a really great collection of Hot Wheels. Let’s go and see what they got.’ Now comics have come into the fray. ‘Hey, I just found a collection of comic books. Let’s go through these today.’”

Kidd’s shop shows his broad interests. In one corner, comic books are sorted in boxes for customers to shuffle through. Kidd’s wife, Jennifer Kidd, decorated the walls in the corner with her favorite superheroes.

Another wall is lined with mostly 1980s, ’90s and early 2000s die-cast cars and vintage toy trucks and cars, which Kidd said are becoming more popular.

“The thing that is funny about toys is actually old rusty toys are making a comeback right now,” he said. “I want to buy the toy I played with. The more beat up it is reminds me of how I loved it.”

Other toys, such as the Fisher-Price brand from the ’70s and earlier, also are hot commodities right now. Kidd has displayed a few of these nostalgic pieces in his store. Next to that sits a small deck of cassette tapes, which he said teenagers have come into the store to buy.

At the focal point of the store, posters of local sports teams — University of Nebraska at Kearney Lopers, Nebraska Cornhuskers and Tri-City Storm hockey — hang on the walls alongside a signed poster of former Minnesota Twins player Kirby Puckett and a character in Kidd’s favorite movie, “The Sandlot.”

Below the posters are where Kidd keeps his best sports cards on display in glass cases. He has dedicated one section of the case to former Husker players and another portion of the case holds hockey players, Kidd’s 10-year-old son Landon’s favorite sport. Also, inside the case is a poster of “The Sandlot” cast with six of the cast members’ signatures.

He has lined additional ’80s and ’90s cards in boxes behind the glass cases. In that era, Kidd said, sports cards were mass produced and easily obtained.

The newer cards, however, are harder to come by. For example, Kidd said he can’t keep basketball cards in stock. He said there is high demand for these cards because COVID-19 cut short the basketball season and limited the production of the cards.

Kidd said he decided not to carry the latest season of basketball cards because of the cost.

But it’s not all about the money for him.

Kidd, a former Hastings College football player and self-proclaimed sports fanatic, said he most likes talking to customers, especially children about their favorite teams and players when they’re looking at cards. He said it’s something he was able to do as a child at one of many card shops in the Tri-Cities, which since have closed.

“Us young collectors had a place to go, not only to buy, but we get to shoot the bull with people about our favorite players or things coming up,” he said. “And while school was in session, I actually had a lot of kids coming in and doing that. That’s what actually made me the happiest. Yeah, they might buy $5, $6 here and there, but they have a place to come and talk about their favorite teams.”

With a weekly newsletter looking back at local history.

The shop opened Friday. “When Trump wins, we’ll sign a new lease on this place until the inauguration, or maybe for all of next year,” said David Searcy.

Other popular menu items at The Crafty Dog include the Evanses’ meaty and crunchy wings that come in one of seven different sauces, the Pork Streamed Buns, and the Philly Cheese-steak Egg Rolls. But the top seller has been their one and only burger: The Crafty Dog Burger.

Kraken Coffee Roasters brings in beans from all over the world, freshly roasts them for Kearney's coffee drinkers

Find the coffee that's been freshly roasted in small batches every Saturday at the Kearney Area Farmers Market.

3 Ways to Cash In on Low Taxes While They Last

These breaks could disappear sooner rather than later.

'You just come in and get a good vibe': Holistic Healing Spa and Bohemian Boutique now open in downtown Kearney

'We all know it’s ugly': Kearney's hospitality industry still struggling because of COVID-19

“Prior to COVID-19, Kearney hosted three events a day. In August, for the entire month, we had fewer than five total,” Darren Robinson said.

Stimulus Payments Could Make Tax Season a Nightmare in Early 2021

There's going to be a lot of confusion about help from the federal government.

Think you don't have enough cash to invest in quality? Think again.

3 Pitfalls of Only Using a 401(k) for Retirement

Kidds Korner owner Nick Kidd, left, talks about sports cards with customer Jason Brewster of Kearney. Kidd, a sports fanatic, loves talking about the teams and players with people who visit the shop. In January, he opened the store at 2424 W. 24th St., Suite 1, in Kearney and will have a grand opening on July 31.

Jennifer Kidd, left, helps her husband Nick Kidd with his collectibles and antique shop when she isn’t working for Kearney Public Schools.

A poster of the cast from “The Sandlot,” Kidd’s favorite movie, is autographed by six of the cast members and is for sale at Kidds Korner.

Kidds Korner in Kearney sells a variety of vintage and antique items including magazines, left, die-cast cars and sports cards.