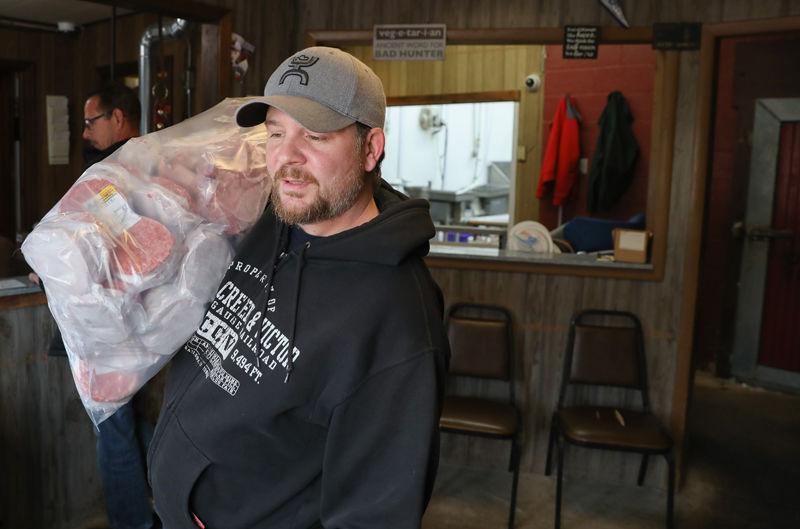 Pleasanton Processing employee Mike Respi carries a package of meat out of the Pleasanton butcher shop for a customer Saturday morning. The butcher shop sold almost triple what it normally sells last week. 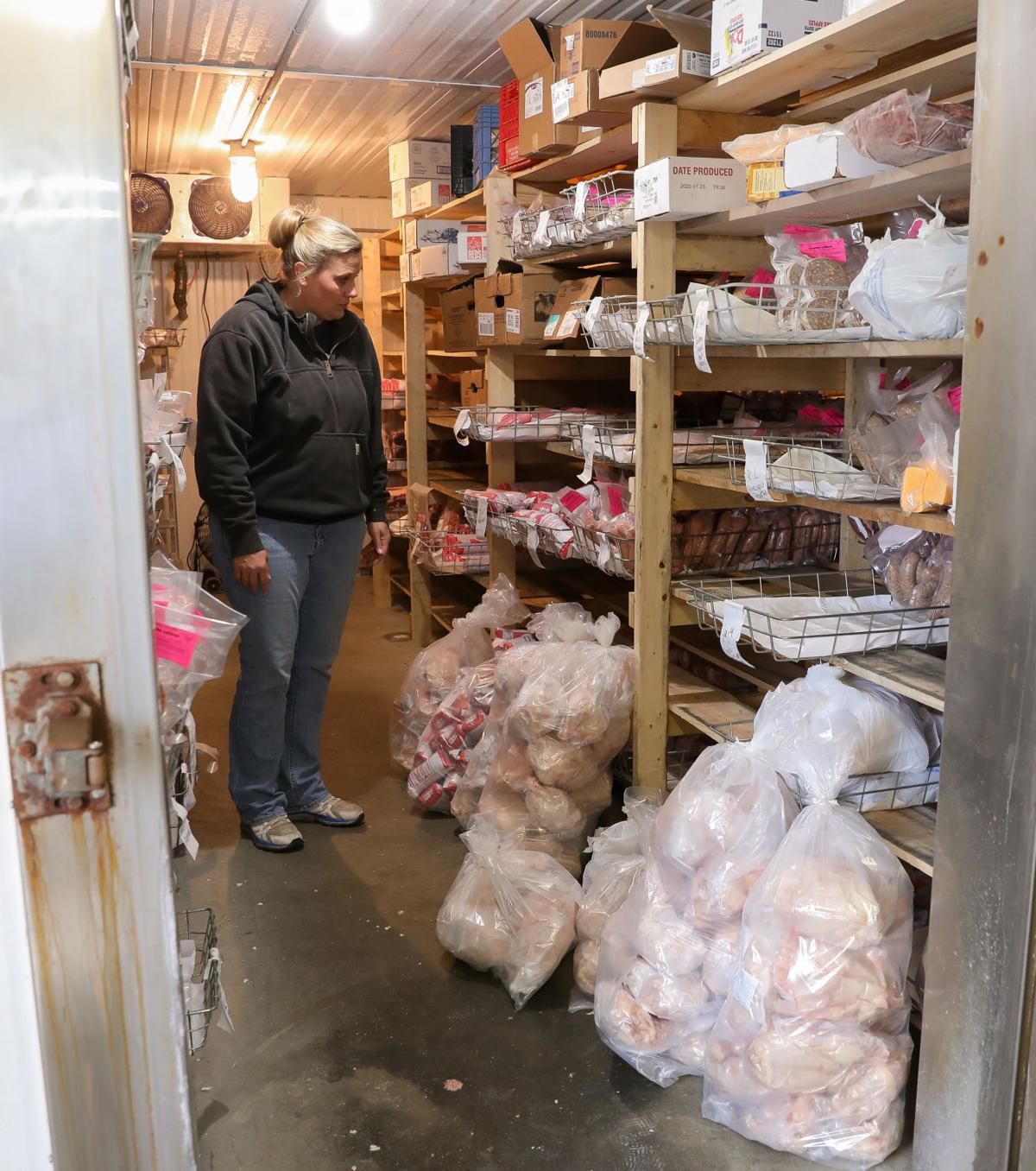 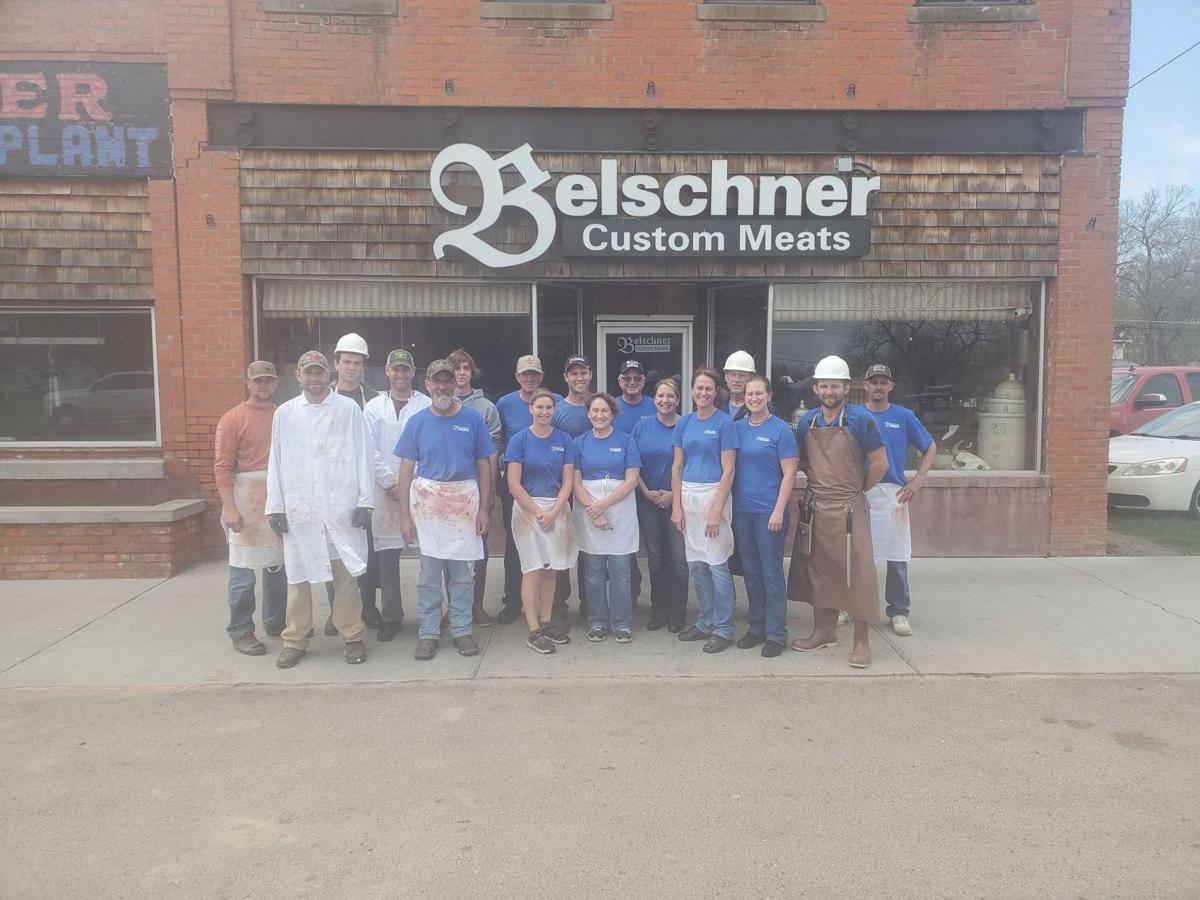 Normally about 10 people work at Belschner Custom Meats in Amherst at any given time. But now that owner Casey Mitchell has expanded and he has lots of orders to fill, he has hired new employees. Thursday, he and 16 workers, the most ever to work at the shop at once, stood in front of Belschner's for this picture. 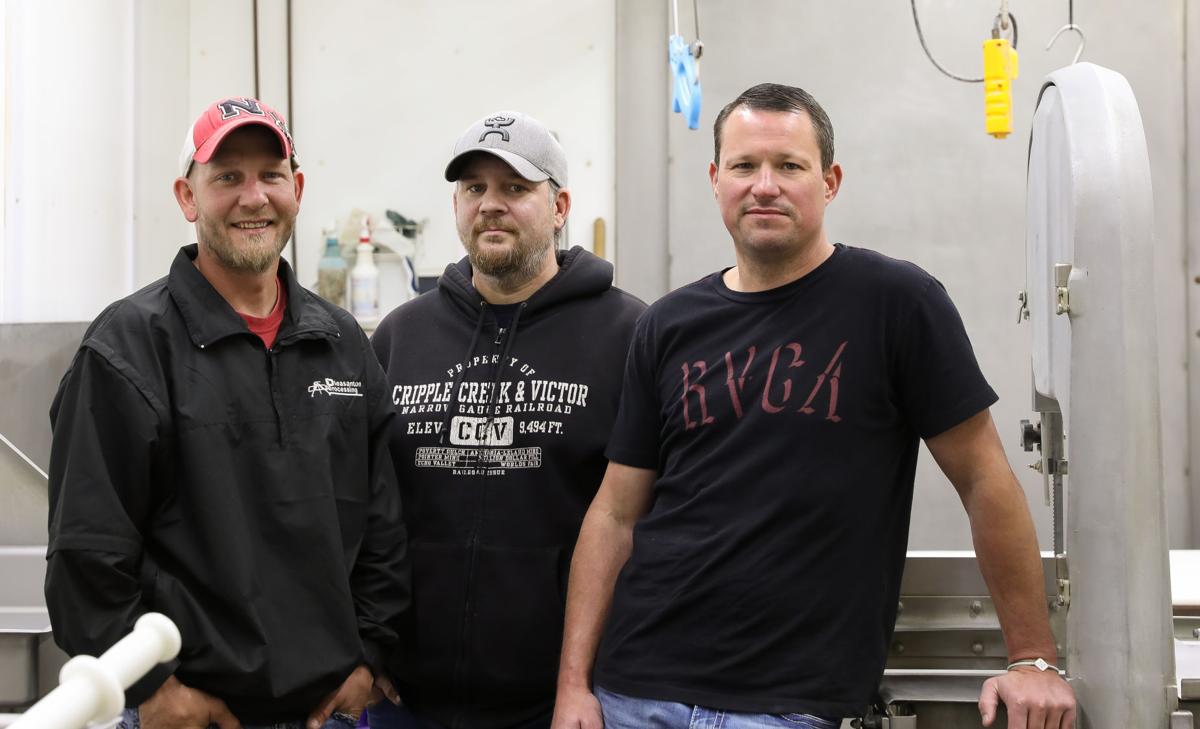 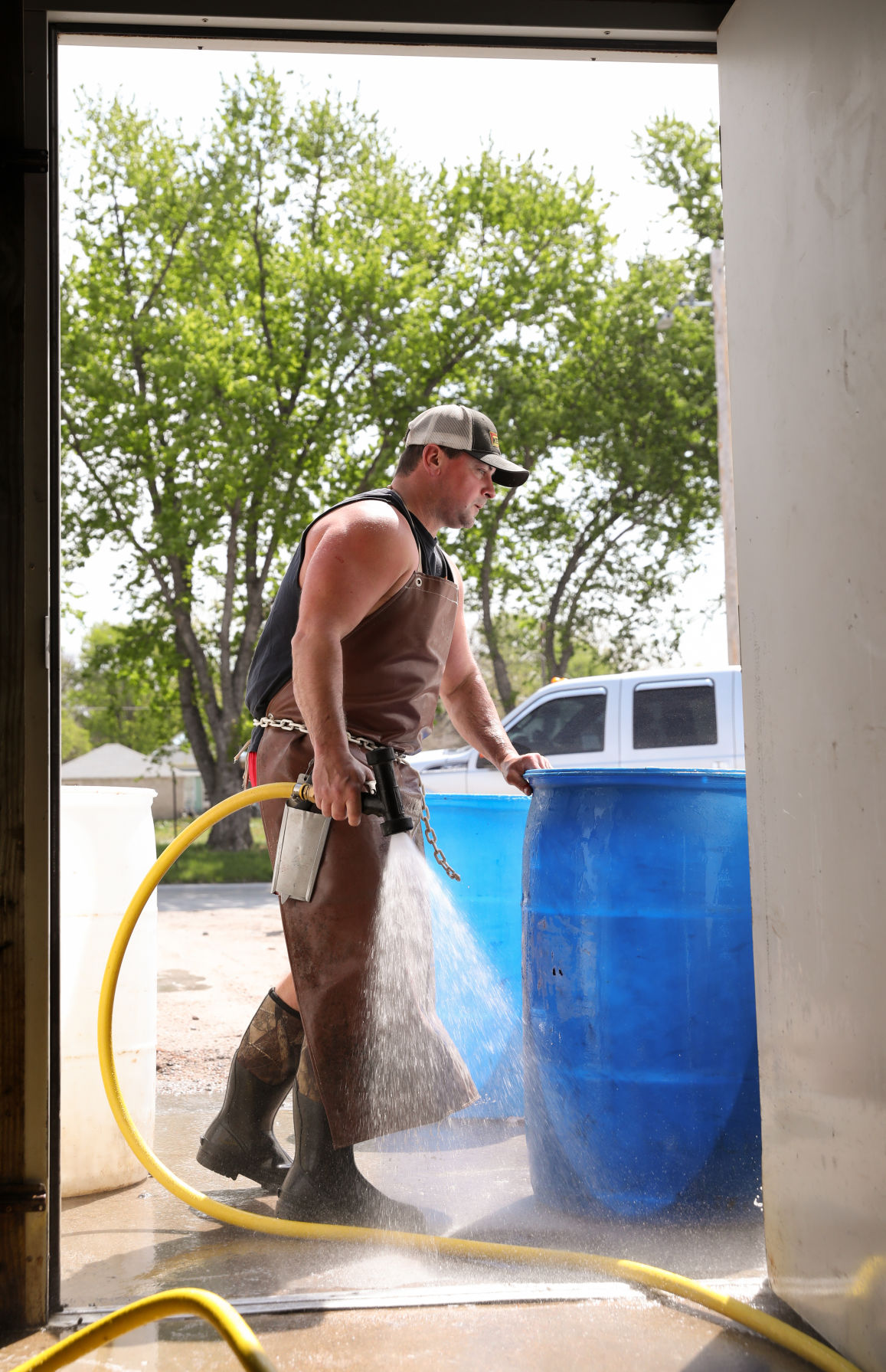 Ravenna Locker owner Jefff Zwiener cleans barrels after slaughtering an extra seven hogs Saturday morning. After killing the hogs, the locker cuts them in half and cools them. Customers must cut up their own meat. Zwiener said he is taking the extra orders on Saturdays to help out the producers and the consumers when meat processing plants are either closed or have reduced operations during the COVID-19 pandemic.

BUFFALO COUNTY — Phones have been ringing off the hook at local butcher shops recently.

Missy said farmers are desperate to get their animals butchered.

“I’m on the phone constantly throughout the day. If I didn’t have the headset, I wouldn’t get anything done,” he said.

And the butcher shops aren’t able to fill all the requests.

On Friday, Stubbs said: “Earlier today it was about the middle of January. It’s really taken off in the past week how much we’re scheduled out. Who knows what next week will bring.”

Farmers also have been searching for processors to butcher their hogs.

The Ravenna Locker and Belschner’s Custom Meats have penciled in hog slaughters through November, and Pleasanton Processing is scheduled into January.

“A lot of the hogs that are getting scheduled right now aren’t born yet,” Stubbs wrote in an email to the Hub. “(It’s) pretty crazy.”

“I’m seeing a lot of new names,” Mitchell said. “Their local locker was booked up, so they’re seeking out a new spot.”

Jeff said he turned down 35 beef appointments Monday morning because he didn’t have room to butcher them now.

“We have small operators that might have 200-500 head (of cattle) on the feed. They’re calling and wanting to know if we can do 10-15 head a month because they got them sold but can’t get them anywhere because the packers won’t even give them a price for them or a bid,” he said.

“Or the price is too cheap, they might as well keep them at home,” Missy added.

Ravenna Locker is hearing from new customers as well.

“I’ve got people calling down by Hastings. I went to college with some of their friends and they’re trying to get in because down there they can’t get in either,” Jeff said. “They thought maybe they could get in before the first of the year.”

Missy said she’s been telling producers at this time that she can put them on a “cancellation list” in case any spots open up. But she said, “I guarantee you that’s going to be few and far between.”

Ravenna Locker has lists of people wanting to buy meat from producers, too.

Stubbs and Mitchell also have waiting lists of customers who want to buy meat.

Mitchell said people call him frequently to buy quarters or sides of beef. The farmers get calls too, he said.

“So if they (farmers) already had five (animals) on the books, they’re calling and trying to push it to 10 or 15 to accommodate all the people that have called them in the virus panic, I call it,” Mitchell said.

Stubbs said the number of customers wanting to buy a half or quarter of beef from Pleasanton Processing has increased significantly. As of Friday, 18 people were on a waiting list for a half or quarter. He normally has two to three on the list.

“When you call in wanting a quarter of beef, I’ll tell you best case scenario you might have it by Christmas, maybe,” he said.

Mitchell said he marks names on his list with a “move up if possible” note in case consumers back out or producers find another place to get their animals butchered.

“I don’t want it ingrained in everybody’s heads that it’s impossible to get something butchered in 2020 because when we get out of this and life goes back to normal, there could be some openings still,” Mitchell said.

Mitchell also has seen people drive from other Nebraska cities to buy large quantities of meat from Belschner’s.

Mitchell said he probably will stop selling retail once he runs out of meat because his focus is custom processing.

Missy and Jeff said they don’t know if they always can get the meat from their supply house to sell to consumers. Last week, they said, they didn’t get their meat order, so Jeff sent one of his employees to a local wholesaler to buy meat.

“We were out of hamburger for two hours and that’s only happened twice the whole time we’ve owned this place, and it’s been twice this year because retail is so outrageous,” Missy said.

Stubbs said he is a little worried about running out of retail meat, but there’s nothing he can do about it.

The Zwieners wonder if people will be able to afford beef. Jeff said retail cuts of meat have increased dramatically.

“I never thought I would see the day of $7 hamburger, and now my salesman is saying it’s going to be $8 before it’s said and done,” he said.

Because beef is expensive, the Zwieners said they started to sell whole chickens they bought from their supply house.

Though they limit each person to five chickens, Jeff said they sold their first 60 chickens three hours after Missy advertised it on Facebook. In total, they have sold about 240 chickens per week the past three weeks.

“We’ll increase, and we’ll try to keep up and try to keep every customer that calls because obviously we’ve got to keep people fed,” he said.

But Stubbs isn’t going to slaughter more animals than normal because he is “overloaded” with retail orders.

Mitchell, whose 10-plus employees butcher about 30 cattle and 20 hogs a week, said he is slowly ramping up production. But Mitchell said he had planned to do that well before talk of the coronavirus.

Two years ago, he added a bigger freezer, last year he built a bigger carcass cooler and this year he expanded his cutting room.

“We’re doing more and we’re continuing to do more all year. But we were going to do that anyway,” he said.

Mitchell said he recently has hired new employees. With the new people on board, he plans to butcher three additionally beef a week.

Like Stubbs, the Zwieners run a small shop with three full-time employees. They said they can’t butcher any more animals because they don’t have the locker space.

However, the Zwieners have come up with a short-term solution to help producers and consumers. They are killing five to seven hogs on Saturdays. They cut the hogs in half and cool them. Consumers have to cut up the meat themselves.

“We don’t really need the extra work but we’re trying to help the hog producers out and people that are in desperate need of meat,” Missy said. “Some of them don’t have any meat. We’re lucky enough to have a cooler full of meat. Some people don’t live like that. They live week to week, paycheck (to paycheck) and so this might help them get some pork in the freezer.”

The Zwieners said more people than they thought are willing to butcher their own meat.

“Because I thought, ‘Well, it would take a while to get a few hogs on the list,’ and now we’re booked until the first weekend in June. And that’s on top of what we already kill every week,” Jeff said Wednesday.

Missy said many deer hunters are equipped to cut their own meat.

So far, the Zwieners are booked into the second week June with the Saturday slaughters.

“We didn’t know how big it would be,” Missy said.

Nebraska’s Hispanic community has been affected greatly by coronavirus, particularly in the meat-packing industry.

'I'm scared to return': Nebraska meatpacking workers and their families speak out

Nebraska's coronavirus peak was projected to arrive by now, but it's probably still coming

While projections had long suggested that the pandemic would peak at the end of April in Nebraska, it appears that cases have only plateaued at best — and at much higher levels than had been seen just weeks earlier, said Dr. Mark Rupp, chief of the division of infectious diseases at the University of Nebraska Medical Center.

Meatpacking workers account for one in six coronavirus cases

Advocates for meatpacking workers have complained that not enough was done, early enough, to protect employees who work shoulder-to-shoulder as they trim meat from carcasses of hogs, cattle and chicken.

Pleasanton Processing employee Mike Respi carries a package of meat out of the Pleasanton butcher shop for a customer Saturday morning. The butcher shop sold almost triple what it normally sells last week.

Normally about 10 people work at Belschner Custom Meats in Amherst at any given time. But now that owner Casey Mitchell has expanded and he has lots of orders to fill, he has hired new employees. Thursday, he and 16 workers, the most ever to work at the shop at once, stood in front of Belschner's for this picture.

Ravenna Locker owner Jefff Zwiener cleans barrels after slaughtering an extra seven hogs Saturday morning. After killing the hogs, the locker cuts them in half and cools them. Customers must cut up their own meat. Zwiener said he is taking the extra orders on Saturdays to help out the producers and the consumers when meat processing plants are either closed or have reduced operations during the COVID-19 pandemic. 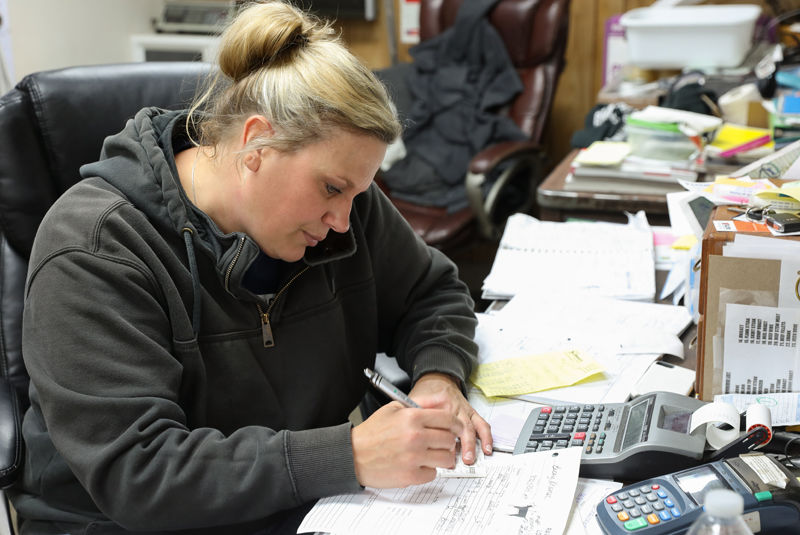 Ravenna Locker owner Missy Zwiener takes a phone call from a customer Saturday morning. She and her husband Jeff Zwiener have received hundreds of phone calls from producers and consumers since COVID-19 caused meat processing plants to reduce or shut down operations.